Explore the social and psychological fallout of the Chernobyl meltdown, Communism's biggest coverup

Julia Kosenchuk, aged nine, sits inside her home in the village of Zorin in Chernobyl. Her poor family makes a living picking mushrooms and potatoes, and the oldest children hunt for rabbits in the forest or collect scrap metal in the summer

On 27 April 1986, tests discovered radioactive particles on workers' clothes at the Forsmark Nuclear Power Plant in Sweden. The source? Not that reactor, but another one, 1,100 km, or 684 miles, away, in the heart of the Soviet "ideological information blackout zone". Those living in the West found out about the 26 April disaster in Chernobyl days before those in the Eastern bloc.

The explosion at Chernobyl caused the most extensive radioactive contamination in history. Fifty-six victims died as a direct consequence of the meltdown and experts estimate that it indirectly killed another 10,000 people in the vicinity of Chernobyl. Millions of people all over Europe have been affected by the fallout.

While democratic countries took precautionary measures, citizens of the East bloc wouldn't learn anything about the tragedy until a week after it happened. On 1 May Bulgarians marched in mandatory parades celebrating labour Day – while radioactive rain showered down on their heads. The Communist rulers hid the truth to avoid mass hysteria – and to avoid shaking what little faith was left in the Communist order. Of course, they took measures to protect their families, who either went abroad or received special packages of iodised food and mineral water. The Bulgarian Communist Party's Politburo wouldn't admit until 13 May 1986 that the level of radiation had increased. It was as late as a fortnight after the incident that it decided to take measures to protect the population's health – without revealing the source of the contamination. Some Bulgarians, however, learned about the Chernobyl disaster from the Bulgarian services of the BBC and the US Radio Free Europe.

Today, it is impossible to measure the exact consequences of exposure to the radiation. Nevertheless, the leukaemia rate in Europe has purportedly increased 60-fold over the past 20 years.

The burned-out reactor at Chernobyl and the nearby city of Pripyat remain the only memorial to the tragedy. The city is a true ghost town, since living there is forbidden. Its evacuation began after the incident, but people still live nearby. 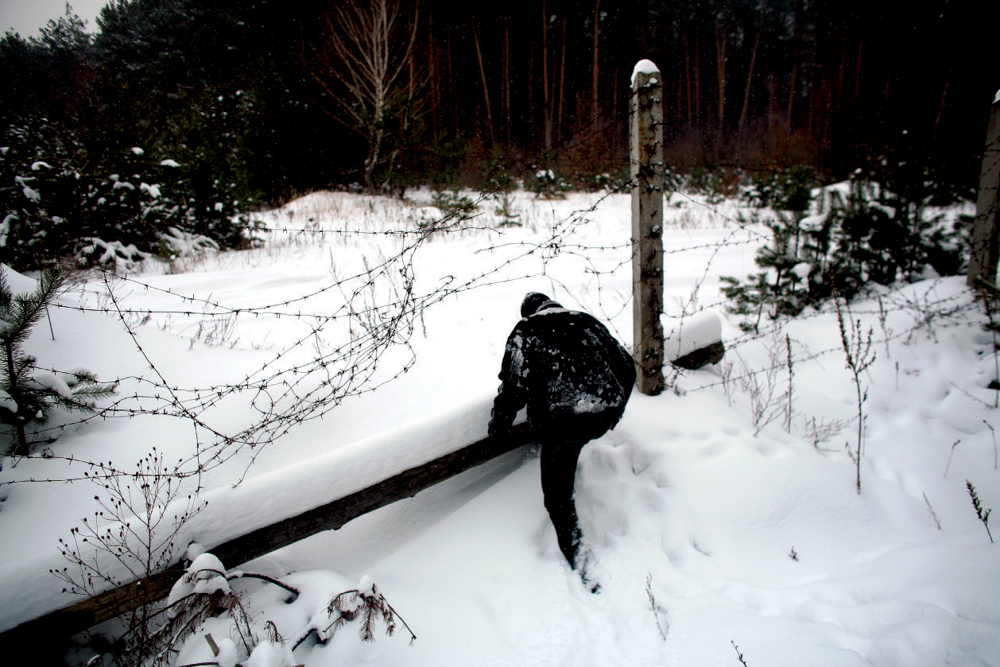 A young teenager crosses through a hole in the fence demarcating the exclusion zone in the village of Dityaki in Chernobyl. He was visiting his babushka who lives just a few kilometres walk into the zone. Many people pass through holes in the fence as they are not officially allowed to cross back and forth without bureaucratic hassle

Sergey Chernenko, 32, watches television in Chernobyl. Chernenko is a former lorry driver at the Chernobyl plant, but had to quit his job four months ago due to heart problems related to Chernobyl working conditions. He believes vodka can cure his disease and has no money for medicine. His wife, Nela, 27, doesn't work as she has to take care of the children, Sasha, aged six, and Anya, 10, who is blind. They exist on a pension of 300 grivnas, or roughly $60, per month 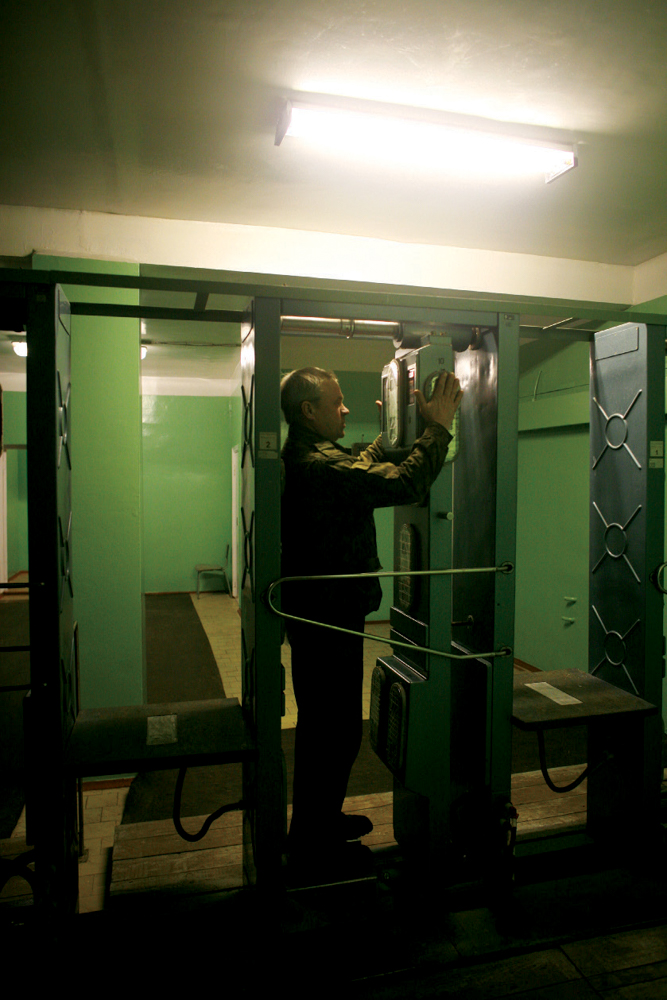 A man stands inside a room in Pripyat, just 3 km, or 1.8 miles, from the reactor in Chernobyl. Pripyat was built for workers and was considered a "Workers' Paradise." A few days after the accident people were ordered to evacuate at an hour's notice. They left behind everything they owned, except what they could carry. The town is forbidden to visitors as it still is highly contaminated with radiation - and will stand empty until it crumbles 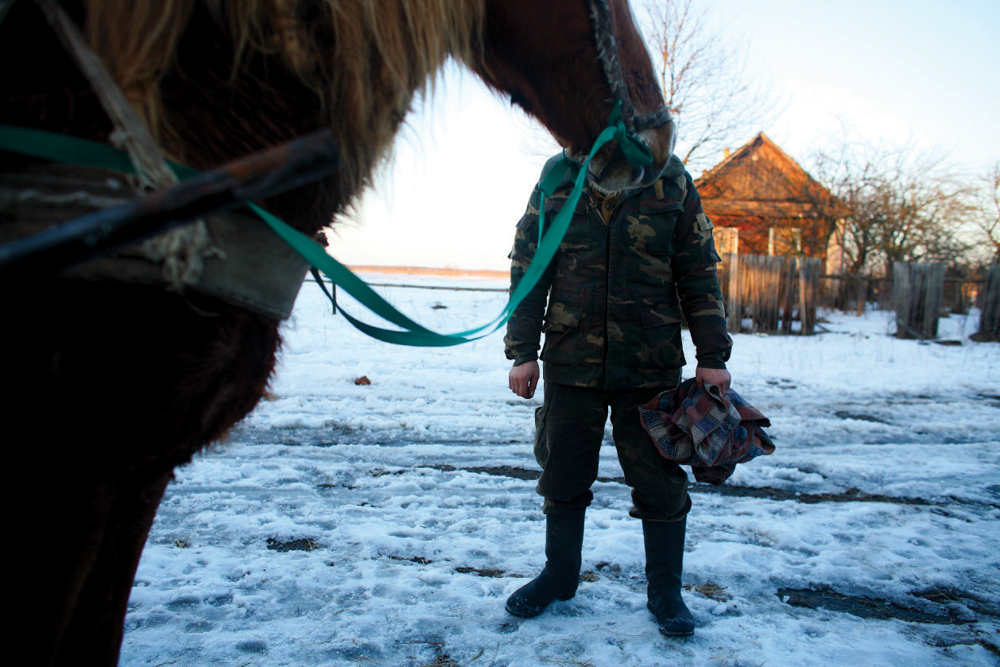 A man prepares to hunt for wild boar in Pribirsk. Since the Chernobyl incident the boar population has exploded in the forests around the region. Wild boar hunting is illegal except during September and October, the official hunting season in the autumn. Many residents say the best hunting is in the winter. The meat from the animals helps sustain many families whose monthly income is as little as $40. The men could potentially end up in prison if caught, but say that it is worth the risk to feed their families 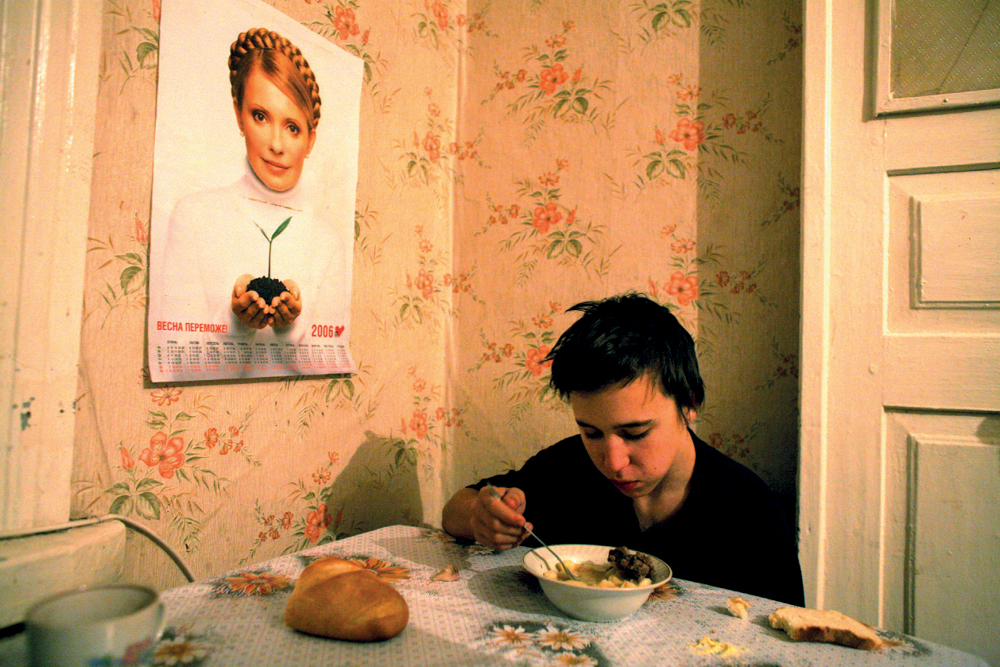 Evgeni Kravechenko, 14, eats his one meal a day under the watchful gaze of Ukrainian Prime Minister Yuliya Tymoshenko in the village of Pribirsk. Originally from a village outside Kiev, Valentina Kravechenko and her three children moved to Pribirsk, a village in the Chernobyl region, because it was cheaper there. A year after moving in Evgeni contracted a heart problem and requires surgery that will cost $800. His mother receives a pension of $85 a month. Without the money Evgeni will not be allowed to have the surgery

Family and friends gather at an Orthodox funeral service for a village elder in Zorin. This region was heavily affected by the social and psychological fallout of the Chernobyl meltdown