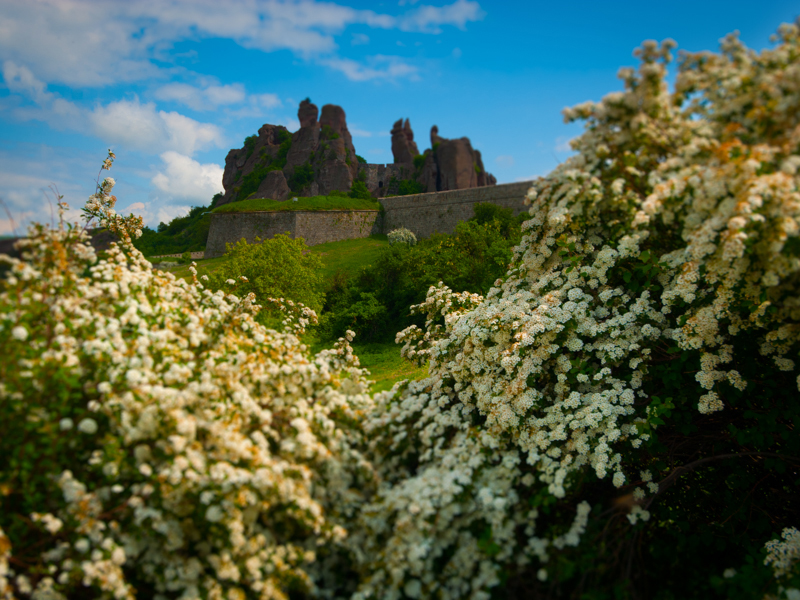 According to Felix Kanitz, the Belogradchik Fortress was the best example in the world of military architecture blended with stunning nature

In the 1870s, while travelling to Belogradchik, a tiny town in Bulgaria's northwest, Austro-Hungarian traveller and scientist Felix Kanitz was in two minds. Kanitz had read the boastful 1841 description of the magnificent beauty of the Belogradchik Rocks by Frenchman Jérôme-Adolphe Blanqui, and he could scarcely believe it. It sounded too beautiful to be true and the lack of accounts by other Western travellers added to his suspicions.

Kanitz arrived in town after an awful journey over rutted roads, but the red Belogradchik Rocks rising above the greenery and the mauve roofs of the town houses left him speechless. "The landscape was so surprising and grandiose, its charm made us forget the hardships which we had to overcome," he wrote in his Danubian Bulgaria and the Balkans. 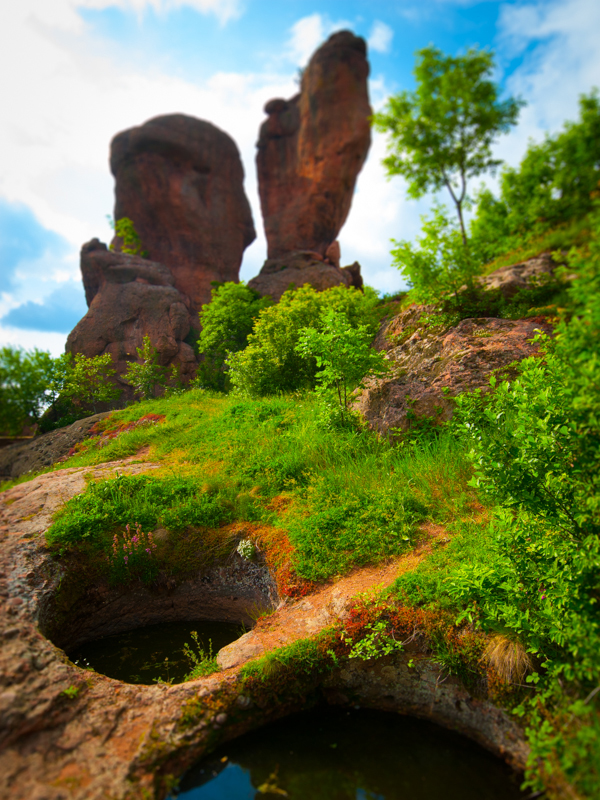 Cisterns in the Belogradchik citadel

Today's tourists are equally amazed by Belogradchik Rocks. The weathered cliffs cover an area about 30 km long and 3 km wide, forming three main groups: Falkovska to the east, Central around Belogradchik and Zbegovska to the west. The Central group is the most spectacular, with peaks of red sandstone rising up to 200 metres. Some of them are solitary, many form groups, and all have strange, imagination-provoking shapes.

The formation of Belogradchik Rocks began about 230 million years ago, when sandy soils were deposited in this part of the planet. Later, a sea appeared, adding to the detritus. Gradually, older and the newer deposits merged into rocks and oxidised iron gave them a reddish colour. When the sea disappeared, sun, wind and rain sculpted the former sea bed into the phantasmagoric rock towers of today. 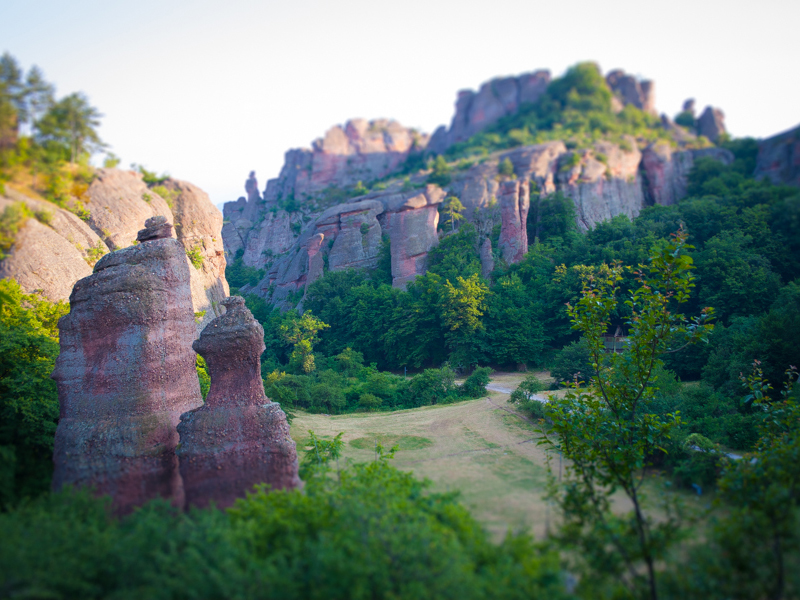 Human imagination discovered Adam and Eve in the rocks to the left and a schoolgirl in the tall rock at the bottom in the picture. To the right is a formation known as The Bear

The locals have given names to the most outstanding formations of Belogradchik Rocks. Some of these reflect the appearance of the rock in question. The Madonna in the Central group indeed looks like a woman with a child, and Momina Skala, or Maiden Rock, in the Falkovska group reminds us of a girl's head. Others have received their names due to their peculiarities. When the wind blows around Kukuvitsata, or The Cuckoo, in the Central group, it sounds like a cuckoo's call. Pchelen Kamak, or Bee Stone, in the Falkovska Group, is the home of wild bees.

Some of the most imposing rock groups around Belogradchik have legends attached, usually involving horror, envy, doomed love and dark passions. The fact that most of these stories have very strong anti-clerical, anti-Turkish and anti-aristocratic sentiment suggests that at least some of them were created during Socialism. 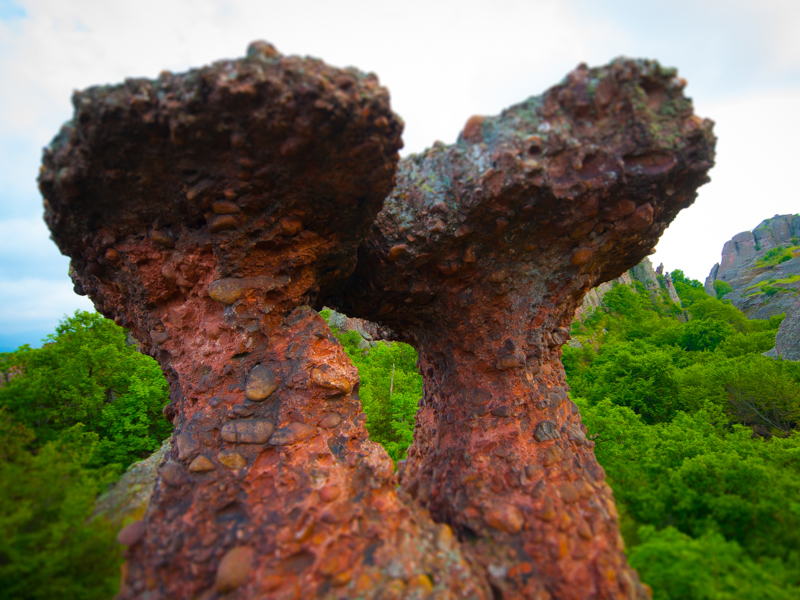 According to the legend Monahinyata, or The Nun, in the Central group, is a beautiful girl who was forced into a monastery by an envious monk. She had a lover in the neighbouring male monastery. After some time of secret meetings, a child was born and the nun was forced to leave the nunnery. In a spasm of wrath, nature destroyed both monasteries, and turned the monks, the nuns and the young mother into stones. According to another version the rock known as Konnikat, or the Horseman, also played a part of this tragic tale.

Borov Kamak, or Fir Stone, in the Falkovska Group, recalls the sorrows of a Bulgarian shepherd who used to go there every day and play the kaval while looking at the nearby Turkish farm where his beloved was kept as a concubine. One day, the ram of his flock turned against his master and pushed him into the abyss. The sheep followed the shepherd, into death and into legend. 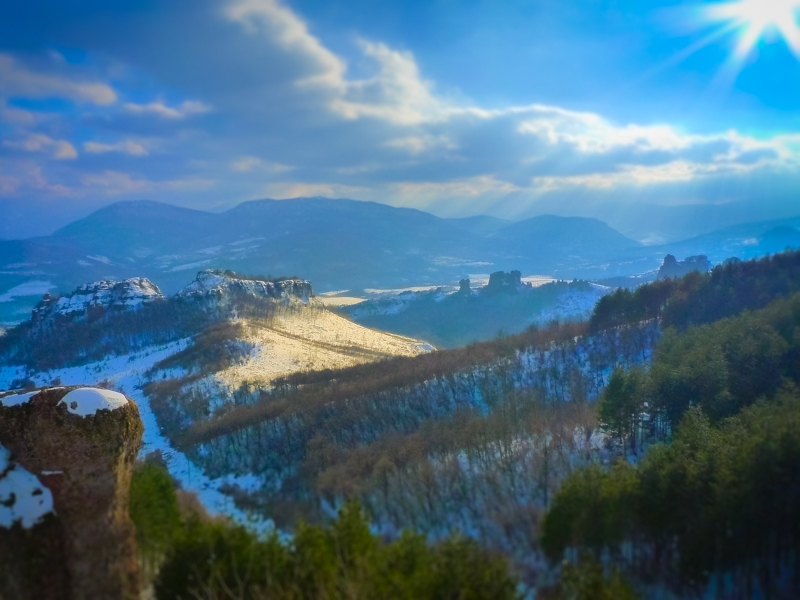 The Schoolgirl and the Dervish rocks, in the Central group, are the petrified remains of another gruesome story. A Turkish dervish developed an unholy passion for a beautiful Bulgarian girl and lured her into a meeting. The terrified girl ran away from him, crying for help, until both of them were turned into stone.

Bliznatsite, or The Twins, in the Zbegovska Group, were two brothers unjustly killed by local noblemen (amazingly, the villains of this story are not Turks). 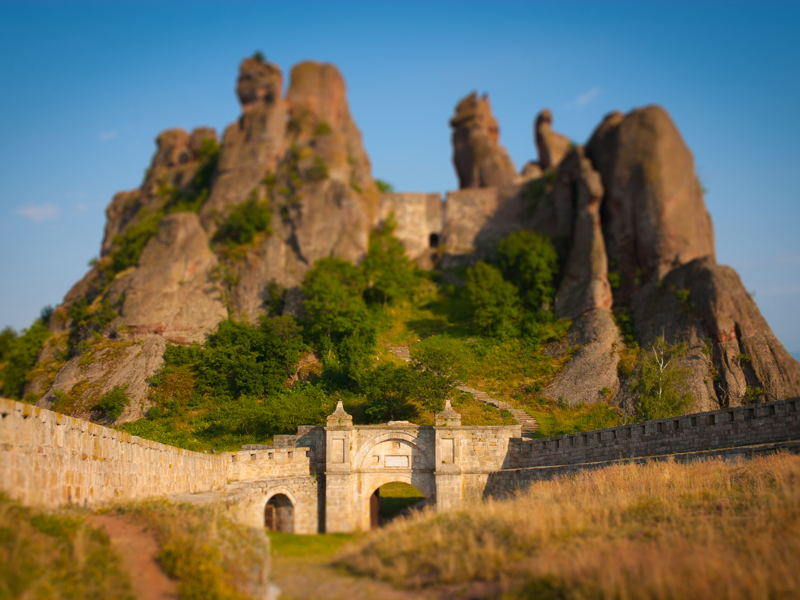 The Belogradchik Fortress is the descendant of a Roman fortification. The highest rocks guarding it are up to 70 metres high

However, there were people who cherished the Belogradchik Rocks for practical reasons. It is hardly surprising that the first of them were the Romans, who turned the highest and most spectacular rock group into a fortress, guarding the road from the Danube to the Aegean Sea. The fortress was strengthened and enlarged by Bulgarian rulers in the Middle Ages, and later by the Ottomans. The latest reconstruction was made in 1805-1837 by French fortification experts and Italian engineers, during unsettled times. Indeed, in 1841 Blanqui visited Belogradchik during his mission to enquire into the cause and effect of the anti-Ottoman uprising by the Bulgarians in nearby Niş and Pirot. 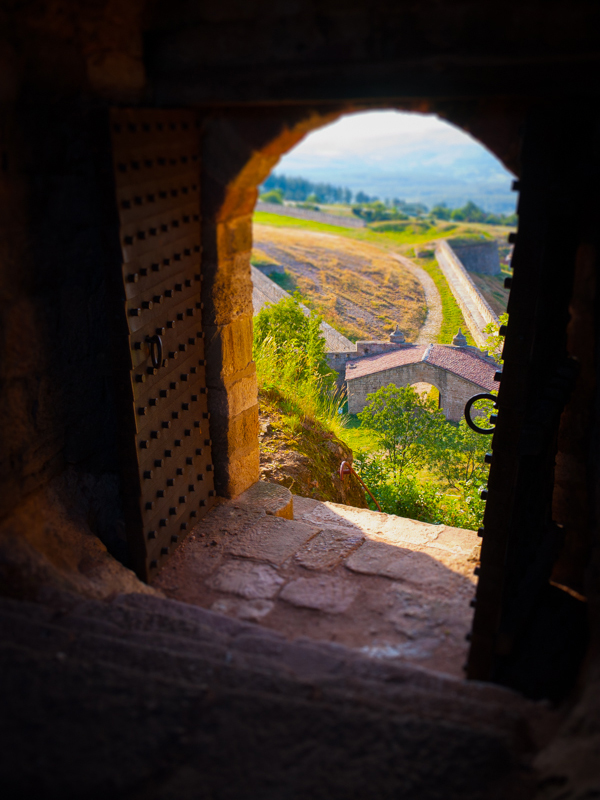 In 1850, the Belogradchik fortress – and the rocks – witnessed the fiercest battles of another Bulgarian uprising. Poorly armed and lacking military experience, the Bulgarians besieged the fort for 10 days, before being defeated. Mass and gruesome executions of the captured rebels followed, in the same fortress.

Today, the fortress is the most popular part of the Belogradchik Rocks, as it blends stunning nature with interesting architecture and stories. The citadel is at the highest peaks of the rock group. The vistas are magical, with the red rocks, the blue of the Stara Planina slopes and the pale green of the Danubian Plain in the distance. 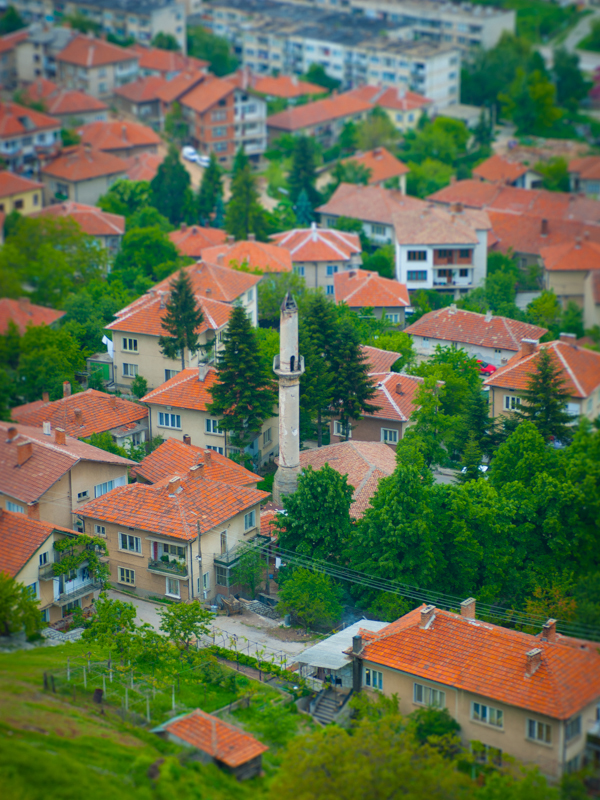 Belogradchik from above. In the 19th Century the town was predominantly Turkish and every Bulgarian rebellion in the area aimed to capture and destroy the much feared Belogradchik Fortress

Belogradchik Rocks were declared a national monument in 1949. In 2008-2009, they were the Bulgarian contender in the New 7 Wonders of the World campaign, in the natural wonders category. The phenomenon didn't make it, but Belogradchik saw a sharp increase in visitors.

Sadly, the tourist infrastructure is lagging behind. Suffering from unemployment and the economic crisis, Belogradchik is a place where the road to the city is barely better than in Felix Kanitz's time, and finding a decent restaurant, or any restaurant for that matter, is not easy at all.