Bulgaria's football combines politics, tax evasion and crime. Oh, and there are some players

Elizabeth Kubler-Ross wasn't into football, but her theory about grief can be applied to Bulgaria's most famous football team – and its fans. Denial, anger, bargaining, depression and acceptance – when UEFA refused to renew CSKA's license, that's what the team's fans and leaders went through…almost.

The tragedy is indeed enormous – and the only catharsis in sight is of the What-Doesn't-Kill-Us-Makes-Us-Stronger type. Considered one of the heavy hitters of Bulgarian football, CSKA celebrated its 60th anniversary in 2008 by becoming the national champion for the 31st time. Of course, not everybody loves the team, which during Communism was a branch of the Bulgarian army, snapping up the country's best footballers while they were still doing their compulsory military service. Detractors often accuse the "Red" CSKA, which still hasn't removed the five-pointed star from its crest, of not having broken its ties with the government and of continuing to enjoy protection "from above" So, when UEFA threatened to toss the team out of the Champions League at the beginning of June and even questioned its participation in the Group A domestic championships, the shock was extreme.

UEFA, however, has sufficient grounds for its surprising actions. CSKA was late in submitting documents about its financial affairs. Had it done so, the paperwork would have revealed huge debts going back many years – including outstanding back taxes. The exact amount owed remains unclear. According to Todor Batkov, president of the club's eternal enemy Levski, CSKA failed to pay two million leva in taxes in 2007. Rumours estimate the team's total debt at around five million leva.

And that's only the tip of the iceberg of CSKA's transgressions. In 1999 all football clubs in Bulgaria were required to "professionalise" themselves by taking on the assets and liabilities of their predecessors. The Bulgarian Football Association registered CSKA as a professional football club, or PFK – except that to date PFK CSKA has not submitted evidence that it has taken on the liabilities of the earlier CSKA. This means that according to the law, the current CSKA is an entirely new team. So eight years ago it should've started out like any other new team – in the Third Division.

However, CSKA has never left Bulgaria's equivalent of the Champions League. This can be explained by the football association's licensing committee deliberately turning a blind eye or by CSKA's submission of false documents. And how did the team manage to get a license for the Champions League last year? The most likely explanation is again doctored paperwork, which the UEFA accepted in good – if blind – faith.

CSKA's dirty laundry began piling up in the years when the team's owners were consecutively Iliya Pavlov (the president of Multigroup, considered the richest man in Bulgaria, who was assassinated in 2003), businessman Vasil Bozhkov (president of NOVE Holding) and Indian steel magnate Pramod Mittal, owner of the troubled Kremikovtsi metallurgical plant near Sofia.

While sinking in debt and dodging the taxman, the team spent money like it was going out of style. They bought foreign players and Mittal increased some footballers' salaries to a record 25,000 euros per month. How is that possible? Thanks to the "grey economy" in which footballers officially receive low pay – and get the rest under the table - in cash. CSKA is no exception, but part of the rule.

All this is a public secret. Bulgarians put up with it because it didn't affect them personally. However, UEFA's actions stirred up a hornet's nest. The first reaction was, of course, denial. The loudest voice in the choir of disbelievers was Aleksandar Tomov, chairman of the club's supervisory board. "We said we earned 3.7 million leva. They told us that we owe more than five million!" claimed Tomov. However, he downplayed one tiny detail – this "income" was in fact a bank loan, most likely guaranteed by Kremikovtsi's assets. Bozhkov had sold the metallurgical company, which is in a financial crisis, along with CSKA to Mittal during October 2006. Tomov blamed the problems on the hostile football association's Certifying Committee and the president of Levski, who first leaked information about CSKA's financial woes.

In the beginning, CSKA's fans, who form one of the slickest propaganda machines in Group A, also couldn't believe it. But they quickly moved into the anger phase. The most extreme among them vowed to ruin Levski's matches in the Champions League by organising riots. Fan leader Dimitar "Ducheto" Angelov promised mass protests if the government did not begin immediate investigations into CSKA and all teams in Group A - especially Levski.

Most of the rage, however, was aimed at Tomov himself. As soon as they heard about the revoked license, hundreds of fans removed his picture from the showcase of club managers at the team's Bulgarian Army home stadium. A few days later the football association's headquarters woke up to broken windows. 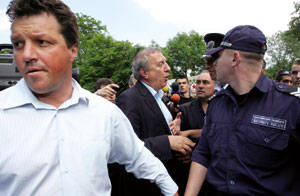 While fans fumed, others tried bargaining. Borislav Mihaylov, the football association's president at the very beginning of the scandal asked UEFA for an extension to give CSKA time to put its paperwork in order. UEFA refused. "Our actions indicate that we will not make compromises with cheaters," UEFA President Michel Platini told 24 Chasa newspaper.

Most Group A teams have a healthy supply of skeletons in their closets. The fact that most of them are owned by offshore firms is only the beginning.

LEVSKI partly owned by Michael Cherniy, a Russian-Israeli businessman banned from entering Bulgaria on national security grounds. The United States has also banned him from entering the country, allegedly over money-laundering suspicions