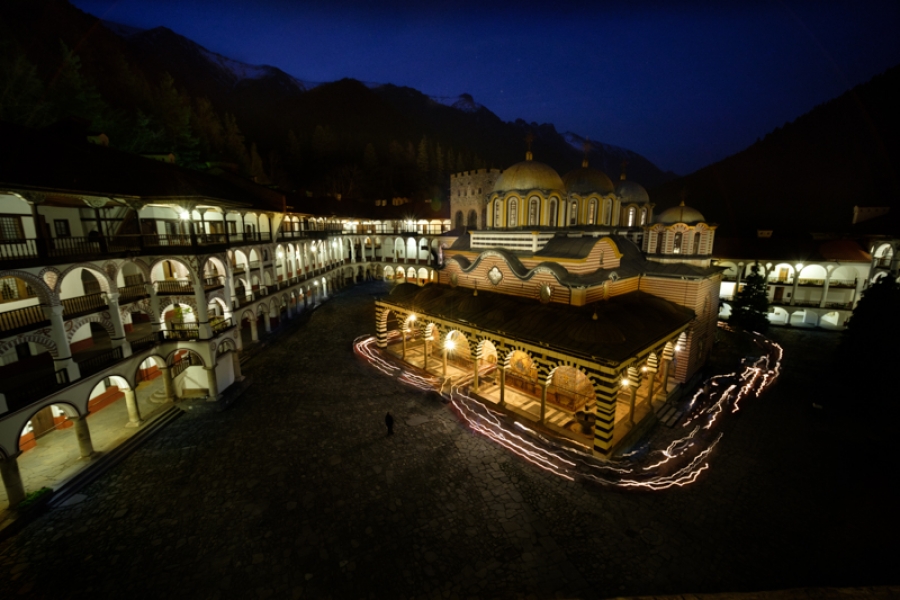 Monks circle the church during the sad Great Friday mass

The chatter of the small group of people at the gate of Rila Monastery in the cold spring evening is of the sort you can hear anywhere and anytime: hellos, how-do-you-dos, smalltalk, but neither the place, nor the people nor the occasion are ordinary. Monks in habits, practicing Eastern Orthodox Christians and a couple of clueless foreign tourists are gathered at the gate of Bulgaria's most revered monastery and most visited UNESCO-site long after business hours to wait for a car to arrive.

The abbot appears, his smartphone still glowing after the call. "They will be here soon," he says. The group goes quiet.

A distant roar of a car engine echoes through the narrow road which is the monastery's only connection to the outer world. A car appears, its inside unusually bright. It stops. A monk gets out, a lit candle flickers in his hand. He gives it to the abbot. Monks and believers rush to light their own candles from it.

On the evening of Great Saturday, the Holy Fire has arrived at Rila Monastery.

According to centuries-old Eastern Orthodox tradition, on Great Saturday divine light descends into the edifice over Christ's tomb in the Church of the Holy Sepulchre in Jerusalem. From there, the Holy Fire is distributed to all Eastern Orthodox Christian nations by airplane (okay, this particular part of the tradition is kind of new). Once on solid ground, the precious light is brought to all parishes before the day is over. Take note of this detail. It is important. 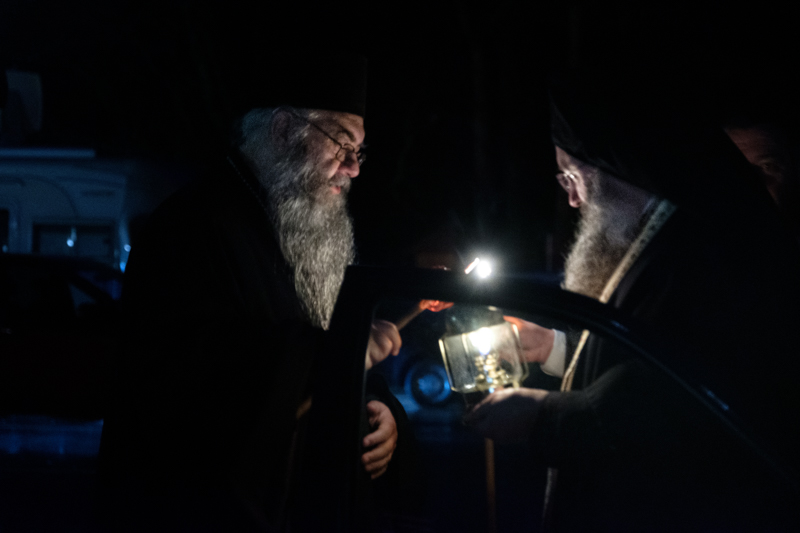 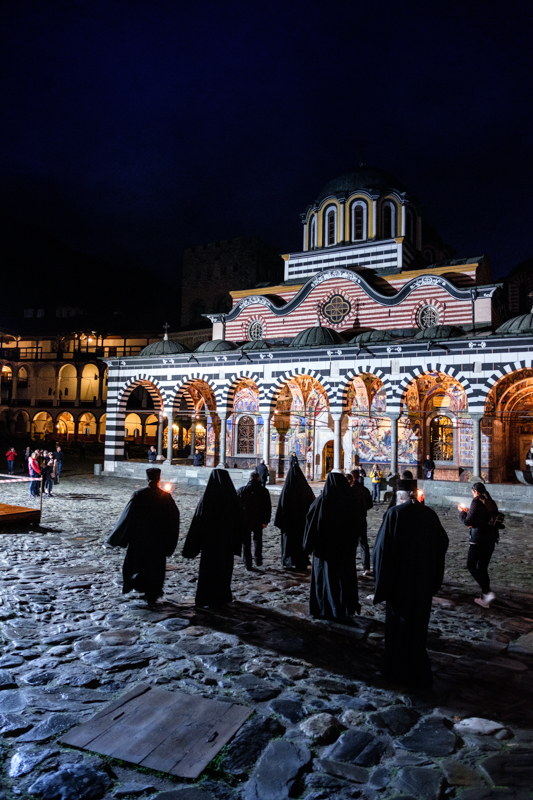 Surrounded by believers and monks, the abbot brings the Holy Fire into the church. The group disperses. There are a couple of hours until the Great Saturday vespers that will pave the way for Easter.

Rila Monastery is a prime place to celebrate Eastern Orthodox Easter, the denomination's most important holiday. Founded in the 10th century by St Ivan of Rila, Bulgaria's patron saint, it has been a centre of religion, spirituality and national identity for centuries. Nowadays, after a decline in the number of monks and the UNESCO World Heritage Site status, both of which took place under Communism, it is more of a tourist attraction. Easter is one of the occasions when the monastery regains its atmosphere of faith, religion and spirituality.

To experience Easter in Rila Monastery at its fullest, you need to be there as early as Great Friday. 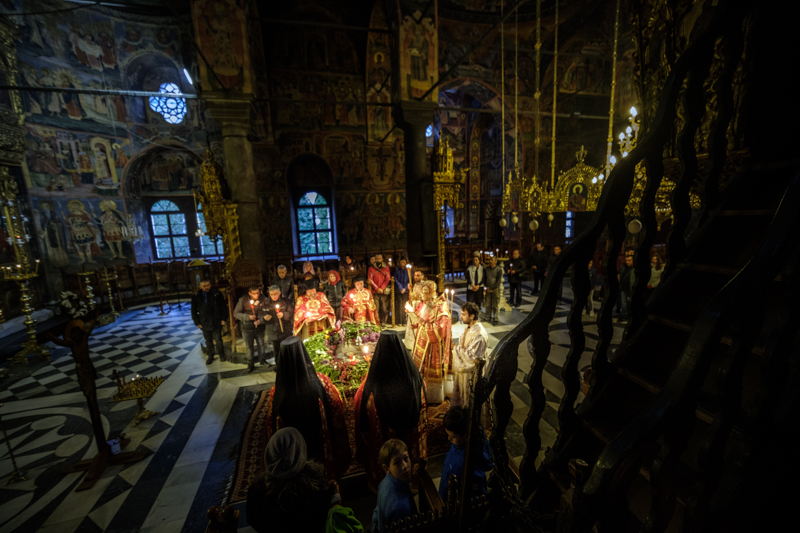 Great Friday is considered by Eastern Orthodox Christianity as the saddest day of the year, as it was when Christ was crucified and died. Ordinary Bulgarians, who after decades of imposed state atheism under Communism and lack of proper religious education post-1989, lost their connection to the Church and their knowledge of the tradition, associate Great Friday with one thing. For them, this is when they go to church and crawl three times under a table, believing this will bring them health. They are oblivious to the fact that the table symbolises the grave of Christ and passing underneath represents the believer's humility, sorrow and gratefulness.

Lack of proper education is also why few people attend Great Friday's vespers, even at a place like Rila Monastery. It is a sad, funeral mass. Bells ring heavily and mournfully over the dark, empty yard. At a certain point, clergy and churchgoers leave the church and circle it with lit candles in their hands. Their procession symbolises the renewal and salvation of the whole universe brought by Christ's sacrifice.

The evening of Great Saturday starts in a similar way. Devout Christians wait for the arrival of the Holy Fire, while ordinary tourists feast with friends and families in the nearby hotels. However, half an hour before midnight, Rila Monastery transforms. Celebratory mass starts in the brightly lit church yard and scores of people flock into the yard. 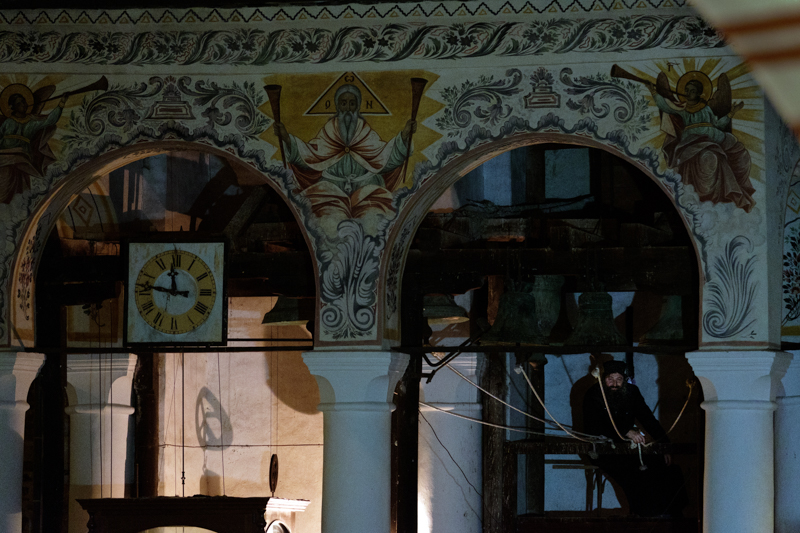 A monk awaits to ring the bells when Easter arrives

At midnight, the abbot, dressed in his best vestments, proclaims three times: "Christ has risen." "He has risen indeed," the congregation answer three times, in a rare moment of spiritual unity between clergy and laity, religion, tradition and modernity.

Then the laity rush to light their candles from the Holy Fire.

Few of them stay to listen to the abbot's prayers and blessings for the Bulgarian nation, delivered from a specially erected podium. Most are busy circling the church three times with their candles. Although this ritual is not sanctioned by the Church, for many Bulgarians it is the most important part of the celebration. Once they have done this, they leave the monastery, while the long and festive Easter mass continues in the half-empty church for a good hour more. 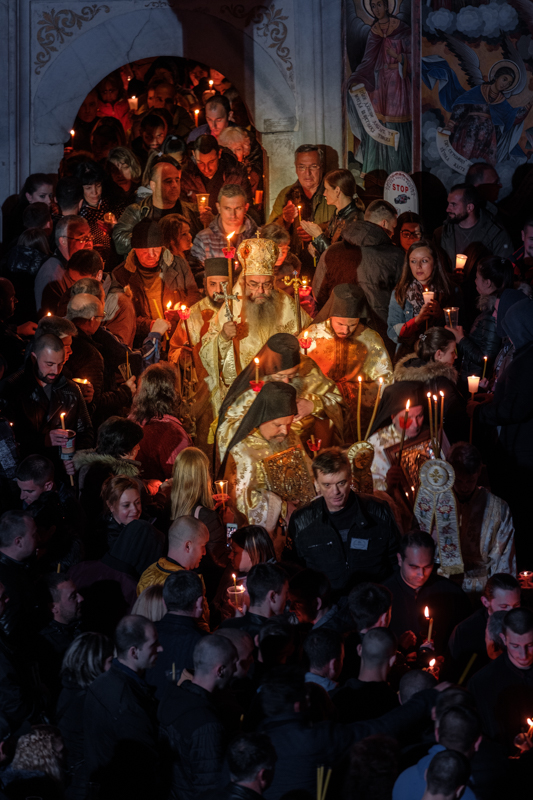 Bulgarians believe that bringing the Holy Light into their homes will bring prosperity and health to the household. At Rila Monastery, trying to do this is actually pointless, as most of the visitors are sleeping in hotels or are from villages and towns dozen of kilometres away.

While the monastery quickly returns to its usual quietness, the roads outside the compound teem with people talking, exchanging greetings and forming a long queue in front of a small shop. Even well past midnight, the small bakery that has become an institution in itself is still selling its famed fritters. Deep-fried batter is not among the foods associated with Easter (sweet bread, coloured eggs and roast lamb are), but in the first minutes of the holiday people flock to buy it anyway.

Then the crowd slowly disperses into the night, but they will return again in the late morning to light a candle in Rila Monastery church. Because it is Easter and traditions are traditions. 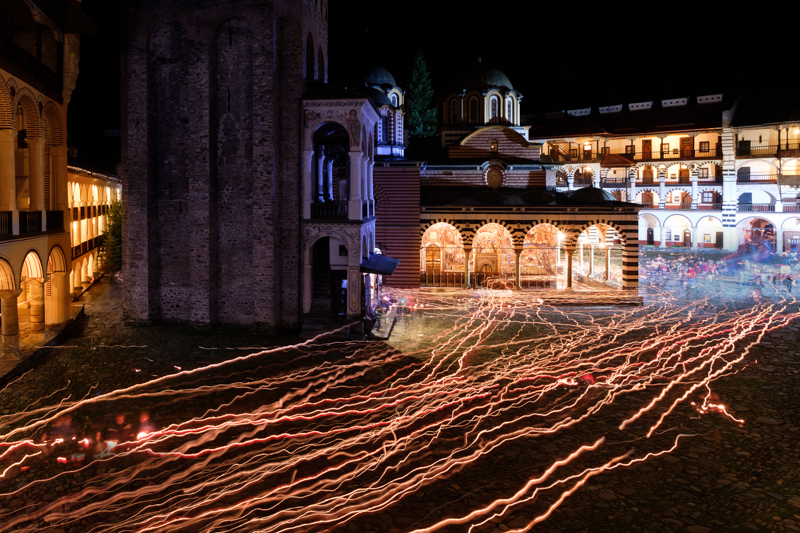 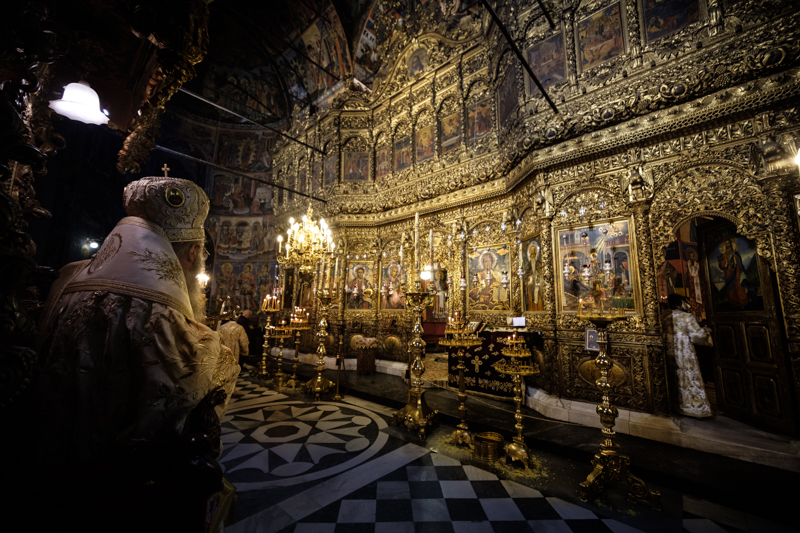 Only the most devout attend the whole Easter mass 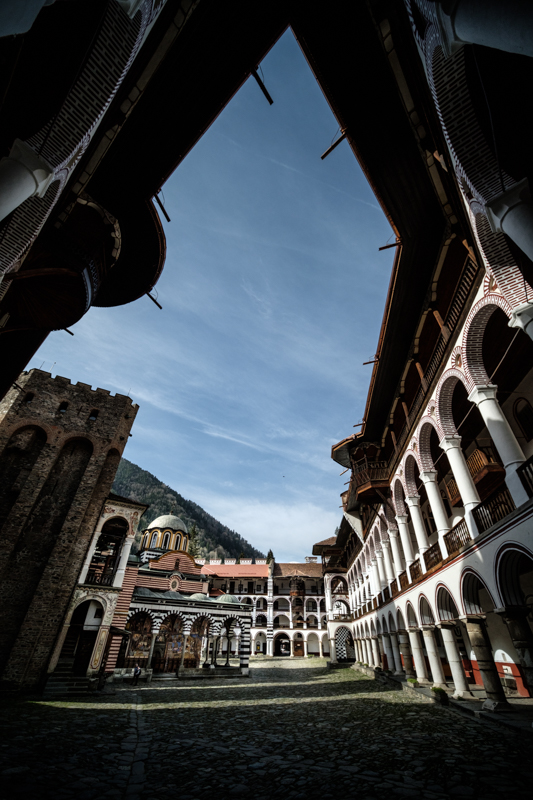 Founded in the Middle Ages, Rila Monastery got its current look in the 1830s. It is the largest and prettiest building Bulgarians built together, as a community, whilst under Ottoman rule