MONASTERY IN THE SKY | VAGABOND Skip to main content

MONASTERY IN THE SKY

Glozhene is the closest Bulgaria has to famous Meteora 'hanging' monasteries

Seen from afar, St George's Monastery near Glozhene, by the Hemus highway, appears to challenge the laws of both physics and common sense. The compact monastic complex of wooden residential buildings with drooping eaves stands on the top of a narrow rock pillar.

Reaching the monastery is also a challenge. Signage in Yablanitsa, the nearest town, is non-existent and the GPS will send you to a dead-end. The road itself is a narrow band of crumbling asphalt clinging on to the steep slopes. Pray that you do not meet an oncoming car. In snow, it is impassable.

All this makes Glozhene Monastery the only place in Bulgaria that resembles the famed monasteries of Meteora in Greece, which are built at hair-rising heights on natural rock pillars in Thessaly.

The earliest evidence of the monastery's existence dates from the 16th century. In the past, legends about icons that moved of their own will were quite popular across the Balkans. Some are told about monasteries on Mount Athos, the conservative monastic republic in Greece, as well as about Bachkovo Monastery and the monastery near Kalofer in Bulgaria. The story about the medieval Ukrainian prince who founded Glozhene Monastery was probably invented in the second half of the 16th century. Why? Because back then the monastery was poor and needed a strategy to attract more pilgrims, and their money. 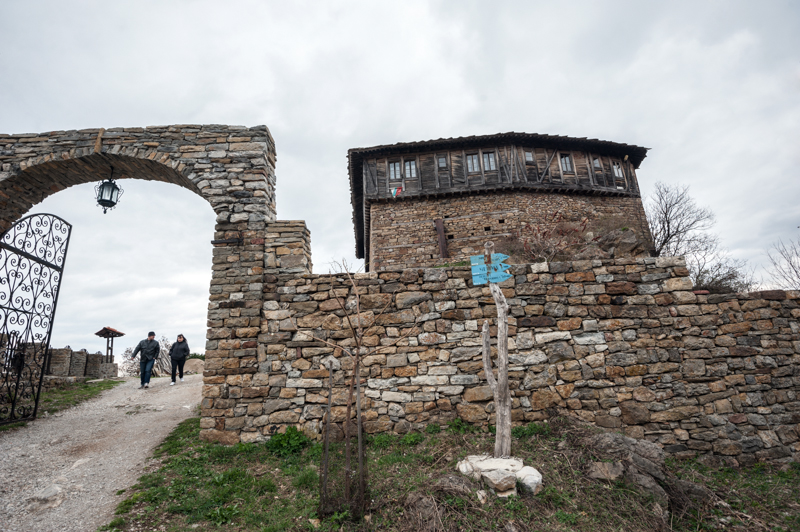 Glozhene Monastery was founded centuries ago, but the oldest preserved buildings in it is from the 19th century

It worked. In the following centuries Glozhene Monastery maintained active connections with Ukraine and Russia, as is evident by its collection of 18th century books in Ukrainian.

The monastery is also linked to the life and deeds of another key personality of the Bulgarian 19th century: Vasil Drumev, aka Bishop Kliment. Drumev wrote the first modern Bulgarian short novel, Unhappy Family, and the first original drama, Ivanko, the Slayer of King Asen, and was among the founders of what would become the Bulgarian Academy of Sciences. In 1873 he took his vows, but this did not stop him becoming a prominent conservative politician after Bulgaria's liberation in 1878. He even became prime minister, in 1886. In 1893, Bishop Kliment went too far with his pro-Russian and anti-Catholic stance in a country ruled by a Catholic Prince, Ferdinand, and an anti-Russian prime minister, Stefan Stambolov. Bishop Kliment was forced into exile in Glozhene Monastery, but as early as the following year Stambolov was disgraced and out of power. Freed from his exile, the bishop made amends with Ferdinand and helped with his recognition by Russia.

L-29 fighter jet in Malak Izvor village, near the monastery

Only the 19th century monastic cells at Glozhene Monastery survive from this turbulent past. The church is still more recent. It was built in 1930 after an earthquake demolished the original in 1913. Had Bishop Kliment lived to see the new church, he would be shocked by its appearance: it is in the Protestant style, as it was created by a German-educated Bulgarian architect. Its old wooden icon-doors, made in the 16th century, were removed and are now in the church of the nearby village of Malak Izvor.

A copy of the supposedly miracle-making icon of St George, however, is still at Glozhene Monastery, covered in silver by grateful believers. People still pray for health in front of it, oblivious to the fact that the icon is hardly mediaeval. Instead, it was probably painted in the 18th century, in Kyiv.