Huge construction works in Skopje have angered all neighbours, but have they consolidated the Macedonians? 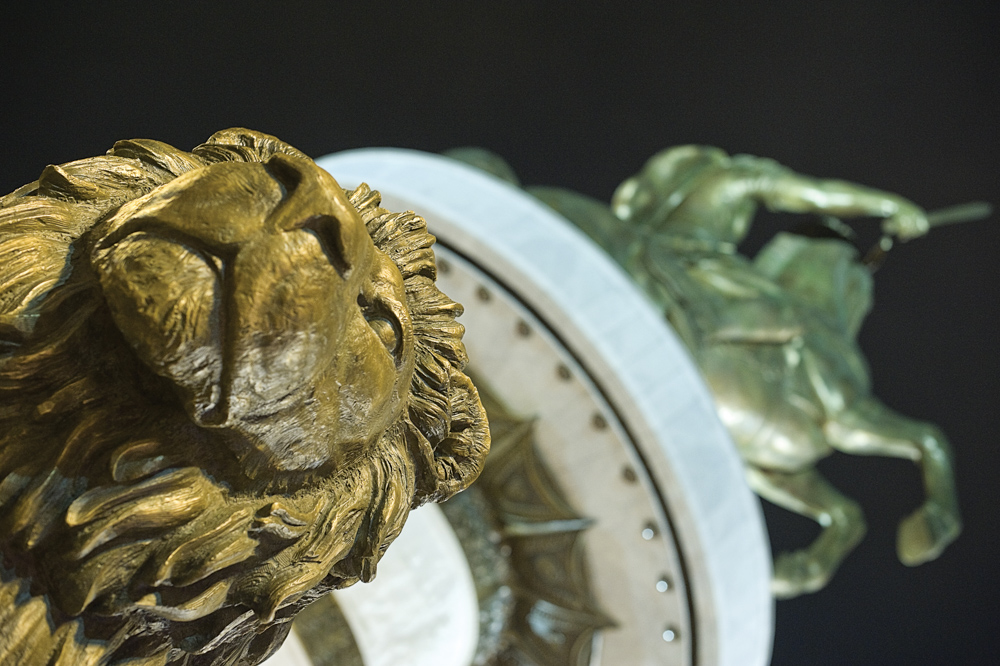 Until recently Skopje, the capital of the former Yugoslav republic of Macedonia (if we are to go by the name the United Nations uses to refer to it in offi cial correspondence), was worth a visit for a handful of reasons, but the list was not very long. It consisted of the juicy chevapi and tavche gravche, or baked beans, taken with zholta, or yellow, rakiya, in the small canteens in the charshia, or market place. Other items to make the grade included the old-fashioned market place itself, the ruins of the medieval fortress and the monument of Skanderbeg, the 15th Century Christian Albanian who fought against the Ottomans. Then there was the old Ottoman bridge over the River Vardar, the ruined former railway station left as a memorial to the devastating earthquake of 1963, and the Mother Teresa House cultural centre named aft er Skopje's most famous daughter. And that was it. The rest of Skopje was all dull rows of apartment blocks from the last decades of Tito's Yugoslavia, and even duller administrative buildings in the city centre. 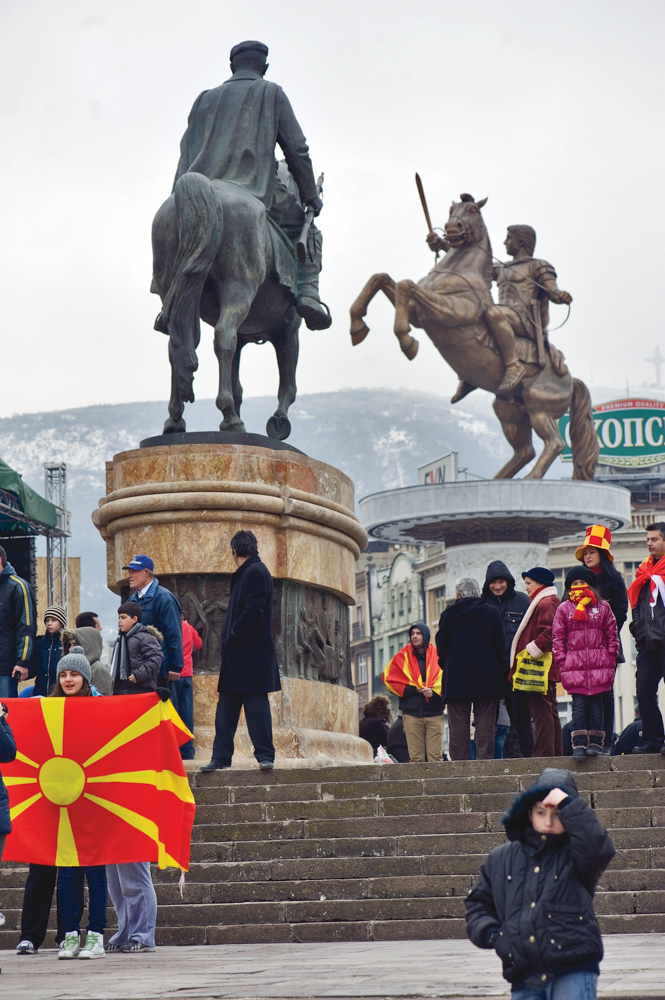 Skopje's once unimpressive appearance was the result of centuries of neglect under the Ottomans, the lasting eff ect of the 1963 earthquake and its short history as a capital. Skopje became the main city of a province in the Kingdom of Yugoslavia in 1931, the capital of the Socialist Federative Republic of Macedonia in 1944, and the capital of the independent Republic of Macedonia in 1991. The economic troubles in the years that followed did nothing to improve the situation.

Nowadays, however, Skopje is getting a facelift and, if you don't count Prishtina in Kosova, you could easily call it the most rapidly changing city in Europe.

It all began in 2010, when the government and the city council trumpeted the start of the extensive and expensive Skopje 2014 Project. The construction of several buildings was planned. Some, like the already opened Museum of the Holocaust are purpose-built, while others are reconstructions of buildings demolished in 1963. The erection of dozens of statues and monuments was also included in the 500 million-euro enterprise. 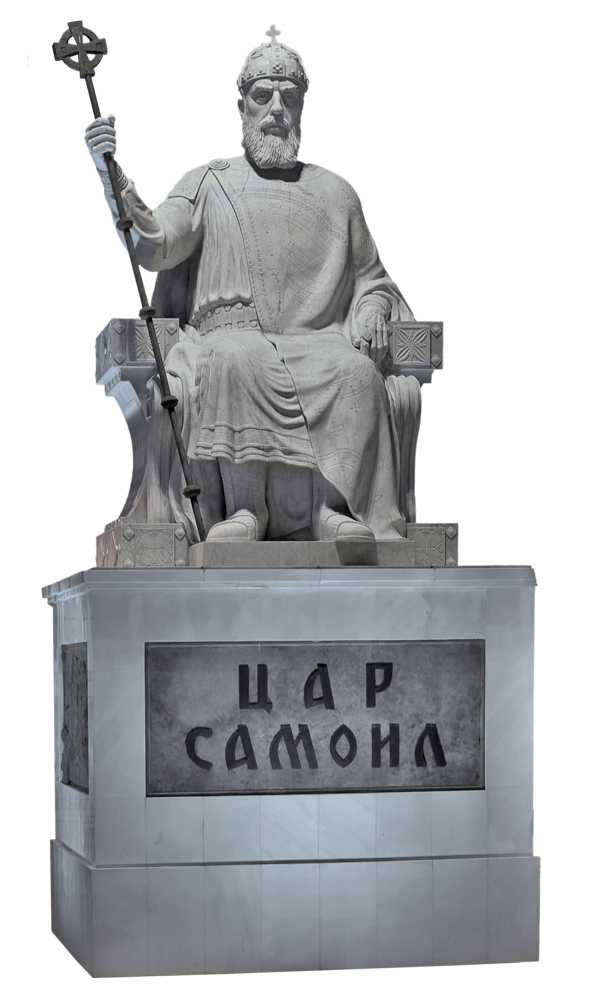 A monument to King Samuil, locally referred to as Samoil

It is only 2012, but much of what was planned has already been achieved, to the delight of the supporters of Skopje 2014, who claim that it brings an "European" air to the city. The opponents of the scheme moan about the partisan selection of the architects, the disproportionate funding and the kitschy style. Even nicknames have appeared, calling the city Skopje Vegas or Skopjeland.

What everyone agrees, however, is that the Skopje 2014 Project has turned the central area of Macedonia Square, the Ottoman bridge and the banks of the Vardar into an impressive sight. At first sight, things are unpromising. 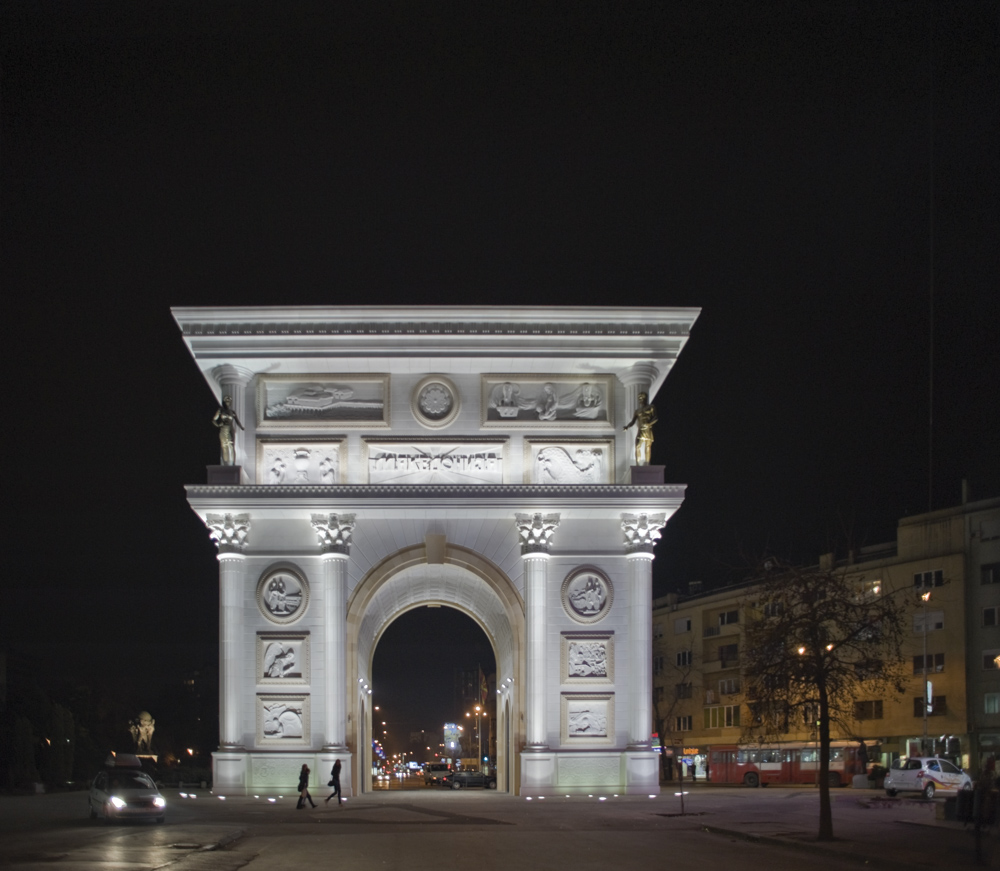 There is nothing impressive aft er you exit the M3 motorway and head towards the centre of Skopje on Alexander of Macedon Boulevard. Old Tito-era blocks of flats flank the road and many women still sport the characteristic hairstyles fashionable in the mid-1970s. The only eye-catching objects in the streets are the billboards advertising mortgage loans or high-quality health care somewhere in Turkey. You realise that the city is not at all the same when the fi rst red doubledecker bus appears. It pulls up to a bus stop, the doors open and disgorge a bunch of locals with the weary faces of people caught in the daily routine.

The city commissioned the doubledeckers from a Chinese company and introduced them into the transport system in May 2011. Contrary to what you might think, it has nothing to do with London. Skopje had its own red double deckers 50 years ago, and the new purchase is a revival of the tradition. 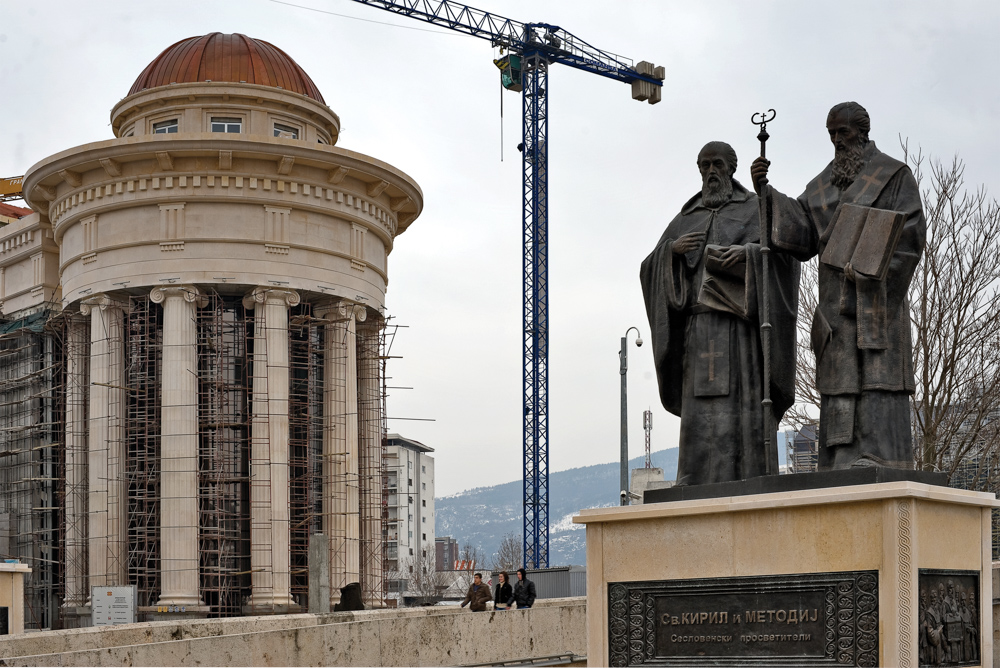 Monument of Cyril and Methodius. The Archaeological Museum, still under construction, is in the background

The closer to the centre you get, the more visible the signs of change become. The red buses are everywhere and a bronze statue of a heroic horseman guards the building of parliament.

Then there is the triumphal arch. Its official name is Macedonia Gate, its location is telling. The arch stands where 11 October Street, which commemorates the date in 1941 when Macedonian armed resistance against the Axis forces was organised, meets Pella Square, named after the capital of the ancient Macedonian Kingdom, of which modern Macedonia claims to be the offspring. Its main arch perfectly frames a huge statue of another horseman, dominating the foreground. Pella is now in Greece.

The official name of the statue, which is 22 metres high if you count the plinth, is Warrior on a Horse. Everyone knows, however, that it represents Alexander the Great. The famous military commander is considered an important part of the history of the Greeks, who include him in their legion of formidable ancient Greek artists, writers, philosophers and so on. To the Macedonians he is the brightest star produced by their ancient forefathers.

The newly-revealed Alexander is the pièce de résistance of Macedonia Square. 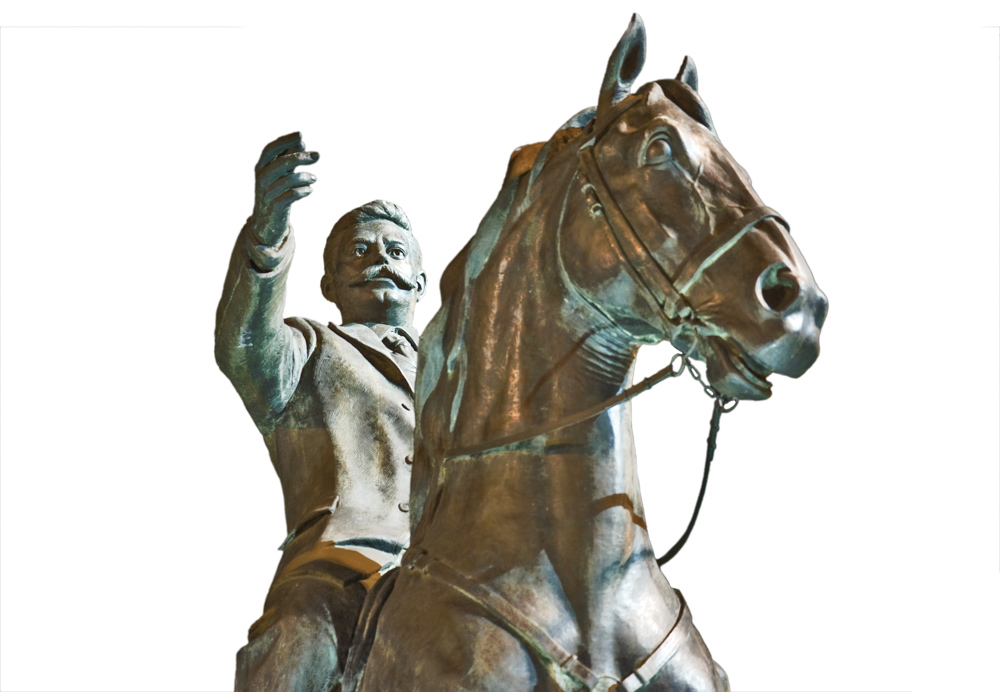 It is not the only monument there, however, and also not the only one causing controversy with neighbouring states. The monument of the Byzantine emperor Justinian the Great, who was born in the 480s near Skopje, rubs shoulders with Dame Gruev and Gotse Delchev, the leaders of the Internal Macedonian Revolutionary Organisation, or VMRO, who at the turn of the 20th Century fought for the liberation of the Bulgarians (or Macedonians – depending on which side of the border you are standing) from the Ottomans.

More prominent figures of Bulgarian history are scattered around. King Samuil (here called Samoil) is on Macedonia Square. On the river bank are the so-called Thessaloniki boatmen who, in 1903, staged a series of terrorist attacks to attract European attention to the Ottoman oppression of the Macedonians (or Bulgarians). On the opposite bank stand the statues of saints Cyril and Methodius, creators of the first Slavic alphabet, and their disciples who brought it to Bulgaria. Even the statue in front of the parliament is controversial, as Nikola Karev is considered by many to be a Bulgarian. 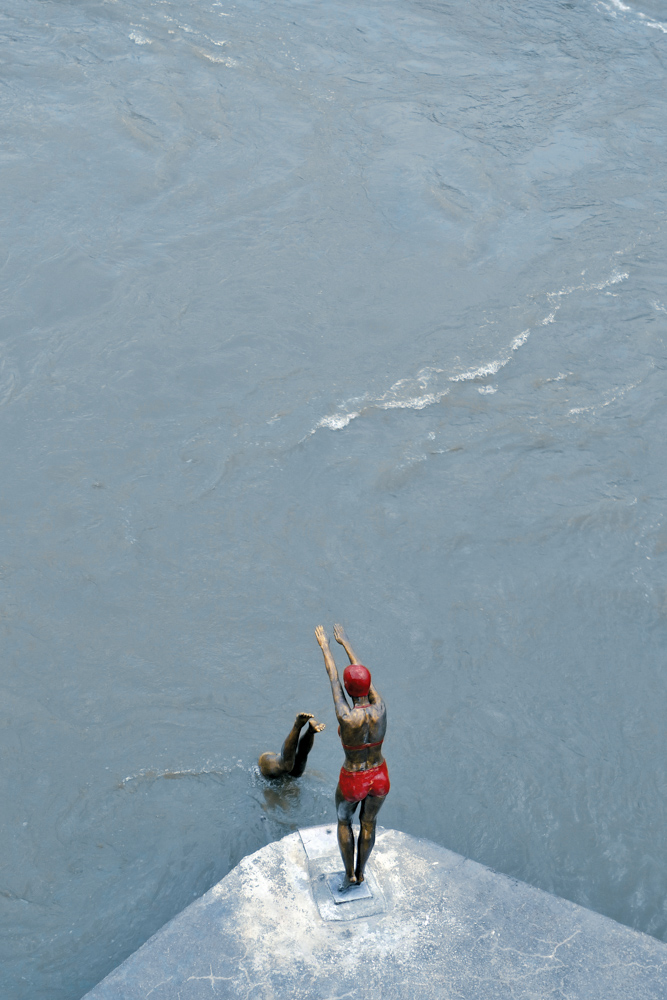 Statues of divers by the Old Bridge. Swimming in the Vardar is actually forbidden

Local heroes are also commemorated, such as the politician Metodi Chento and Macedonian and Albanian youths who died in the internal conflict of 2001.

The result is overwhelming to such an extent that the solemn statue of Skanderbeg is dwarfed and humbled by the size and number of these new arrivals.

The most charming of all the statues in Skopje, however, have nothing to do with politics, propaganda, history or quarrels with neighbouring states. They are not even the products of Skopje 2014. They appeared several years before the disputed project and represent Skopje characters. Between the gigantic statues in the central area are hidden life size figures of bronze girls diving into the Vardar, Botero-style musicians, beggars, and gossiping beauties with generous necklines and short skirts.

Truth to tell, these statues and the hospitable publicans in the charshia with their juicy chevapi and soft zholta rakiya are better incarnations of the spirit and vitality of Skopje citizens than even the grandest and tallest statue of a heroic pre-AD horseman.