Remains of mining disaster linger on near Vratsa

Stunning peaks, steep cliffs, lush forests and plenty of trails to explore: Vrachanski Balkan Nature Park is the perfect escape from the big city. In a couple of days here you can visit the Ledenika Cave and its multimedia show, explore hidden treasures such as Borov Kamak Waterfall or have a picnic or a climb at Vratsata Gorge. The air is, of course, crystal clear.

Zgorigrad village, about 3-4 km from Vratsa, is the starting point for many of the  activities in the park. What few promotional materials about the region mention, however, is that it was the location of one of Bulgaria's worst mining disasters that devastated a huge area and claimed hundreds of lives. Traces of it are still to be clearly seen.

Today Zgorigrad is proud of its pristine natural setting, but when it first attracted human attention during the Chalcolithic era it was because of its copper mines, which could be easily exploited even with prehistoric technology. Mining here never ceased, boosted by the region's location on one of the major routes from the Danube to the Aegean. The Thracians, the Romans, the Byzantines, the Bulgarians and the Ottomans all made use of the local ore.
Mining continued and was modernised after Bulgaria regained its independence, and expanded further under Communism. New mines were opened, targeting a wider portfolio of resources, including lead and zinc. The importance of mining to the local economy and labour market grew in significance, a fact recognised by the authorities with the erection of a statue of a miner immediately after the Vratsata Gorge, where the road forks and the left leg leads to Zgorigrad.

In 1966 what had been a boon became a curse. Ironically, it took place on 1 May, Labour Day, a crucial date of official celebrations in Communist Bulgaria, marked by mass organised demonstrations all over the country.

It all began four days earlier, when heavy rains hit the region. On 1 May, the tailing pond of Plakalnitsa mine (the toponym can be translated as Crying Mine) broke. At 11.25 am, about 500,000 tonnes of water, mud and debris rushed through the narrow course of the Leva River in a 3-metre wave, hit Zgorigrad, flowed through the Vratsa Pass, entered one of the city's most densely populated neighbourhoods and finally hit the city centre.

The wave had covered about 7km in only 20 minutes.

When everything calmed down, about a third of the houses of Zgorigrad had been obliterated. Scores of people and animals drowned or were suffocated. Everything was covered with mud. It took the army three days to clear the affected area and dig out all the bodies. 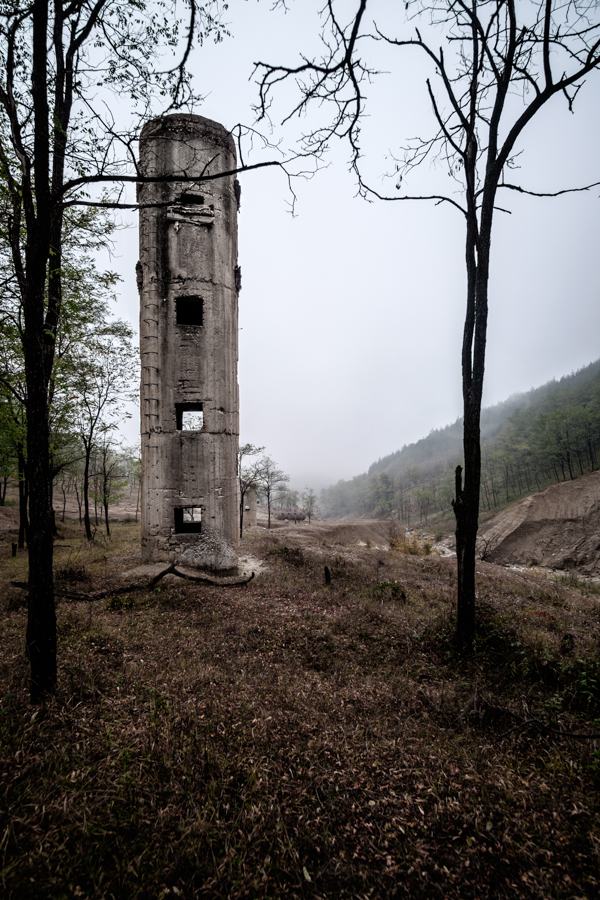 The government of Communist Bulgaria reacted as was usual for any totalitarian government. It did its best to cover up the incident, particularly as the disaster struck on a day of a particular significance for the regime. The rest of Bulgaria hardly heard about what had happened to Zgorigrad and Vratsa on 1 May 1966, and only 118 victims were officially reported. Locals later claimed that the death toll exceeded 500, and that there was hardly a family unaffected by the catastrophe.

The Plakalnitsa continued to operate until the 1980s, when it was closed.

The course of the devastation, however, has been left as it was on 1 May 1966. The remains of the tragedy are still there, at the beginning of the trail to Borov Kamak waterfall.

More than 50 years after the event, the landscape remains a disturbing sight. The Leva Creek squeezes through slopes gouged out by the raging water. The level of destruction can be clearly seen on the opposite slope. Concrete towers that were once part of the tailing's canal lie around, broken in half, filled with debris. The colours around are mostly dull grey.

Curiously, Zgorigrad's central square bears… an Italian name, Tesero. Tesero, a small town in the northeastern Italian province of Alto Adige was the location of a similar disaster, in 1985, the collapse of the Val di Stava Dam, which claimed the lives of 285 people. Tesero and Zgorigrad are now twinned.

There have been plans for the re-landscaping of the Zgorigrad mine and its former tailing, but for now these remain only good intentions. Nature is slowly regaining its hold on the former canal. Here and there in the river there are pockets of wild vegetation – spots of surreal beauty among the destruction – while low shrubs and twisted trees cover the slopes, slowly transforming the remains of the 1966 tragedy into a thing of the past.