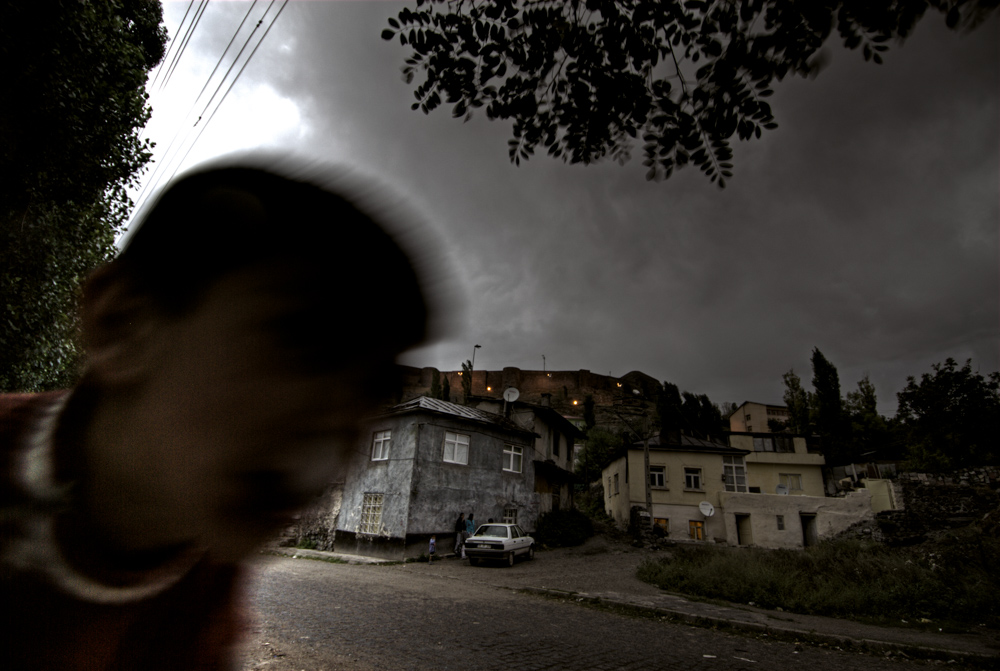 The restaurant owner assigns some task to his helper, who disappears into the cold rainy night of Kars. Soon the boy is back in the warm, low-ceilinged room. A chinking sound is heard from within the opaque nylon bag he's holding and the two sneak into the kitchen. After a minute or two, the owner reappears, and with a genial gesture puts on the table the beers the boy has bought from the nearby grocery. They are wrapped in napkins.

While wandering around Kars, Ka, the protagonist in Snow, the 2002 novel by Orhan Pamuk, often drops by local restaurants to drink raki. However, ordinary tourists with no friends in the town would be hard put to find a place that is içkili, or licensed to serve alcohol. Luckily, some owners of içkisiz, or non-licensed, don't mind serving a bottle or two, but take care to sheathe it in a napkin.

Snow, or "Kar" in Turkish, won literary fame for Kars. There are, however, few tourists who come with the sole purpose of seeing the town, most staying only for a brief night before proceeding to Ani, Armenia's abandoned medieval capital. Kars is the nearest town to the surreal sight that this ancient city presents of half-destroyed cathedrals with gaping domes which stand on one of the banks of the heavily guarded border river Arpa Çayı. 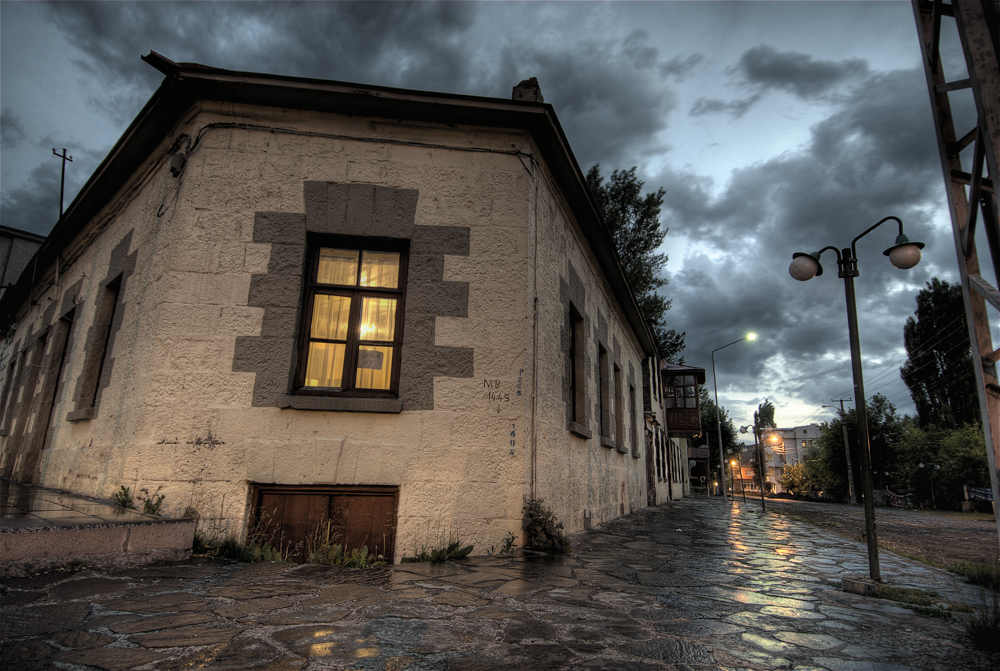 A Russian-built European-style house. In 1892 the Russians amounted to just 7 percent of the total city population

Kars is much harder to reach than Paris, and Orhan Pamuk is not Dan Brown. This explains the absence of groups of literary tourists, armed with a map and a book, walking along Inönü Cadısı and Faikbey Cadısı, the streets mentioned in Snow, in an effort to retrace Ka's wanderings. It is the locals who climb upon the fortress above the town to bow before the türbe, or tomb, of Celal Baba, feast their eyes on the panorama spread out at their feet and munch sunflower seeds.

If we discount its role as a literary setting, Kars has another feature it is famous for – this border town is known as the coldest place in modern Turkey. Its winters are long and severe, and snowdrifts blanket the roads leading to it, severing the town from the rest of the world for days on end. 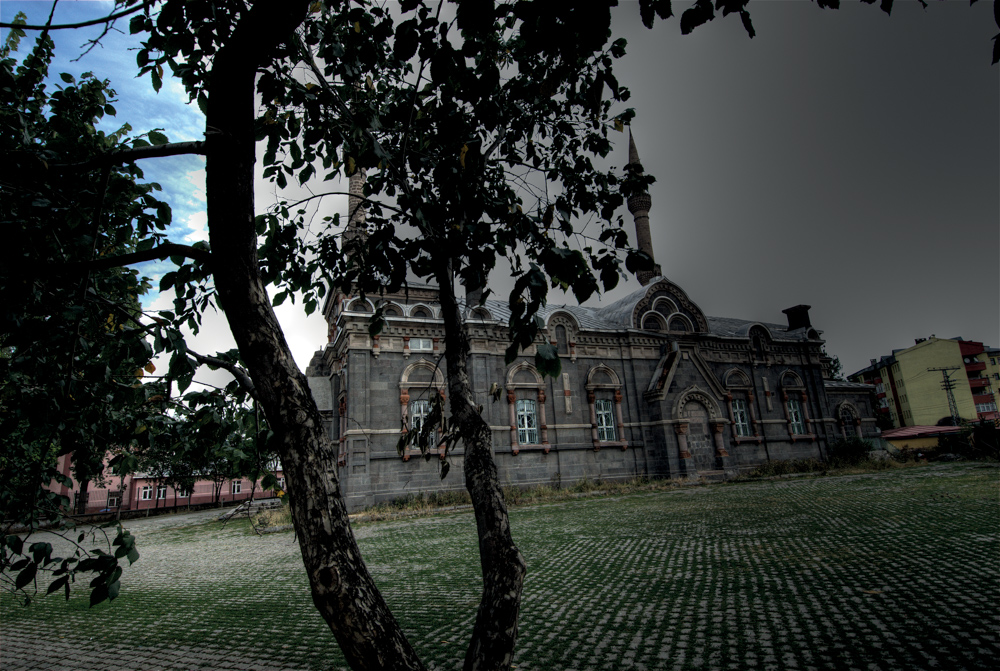 The Russian Cathedral is now a mosque

Despite its inclement weather, Kars was a craved military goal in the Middle Ages. It had been one of the stops on the Silk Road, but its significance started to dwindle when the flow of caravans ceased. The town re-appeared on the military maps again in the late 18th Century, when an ambitious Russia realised its importance for controlling another road – that connecting the Caucasus and Asia Minor.

Throughout the 19th Century the tsars tried to establish control over Kars, which had been the capital of Bagratid Armenia for a brief period in the 9th Century, in the hands of the Seljuks in the 11th and under Georgian rule in the 13th. It was a Tamerlane conquest in the 14th Century and an Ottoman domain in the 16th. The sieges it was subjected to in 1807, 1828 and 1855 were inconclusive, until finally the Russians got the upper hand and seized the town during the Russo-Turkish War of 1877–1878. 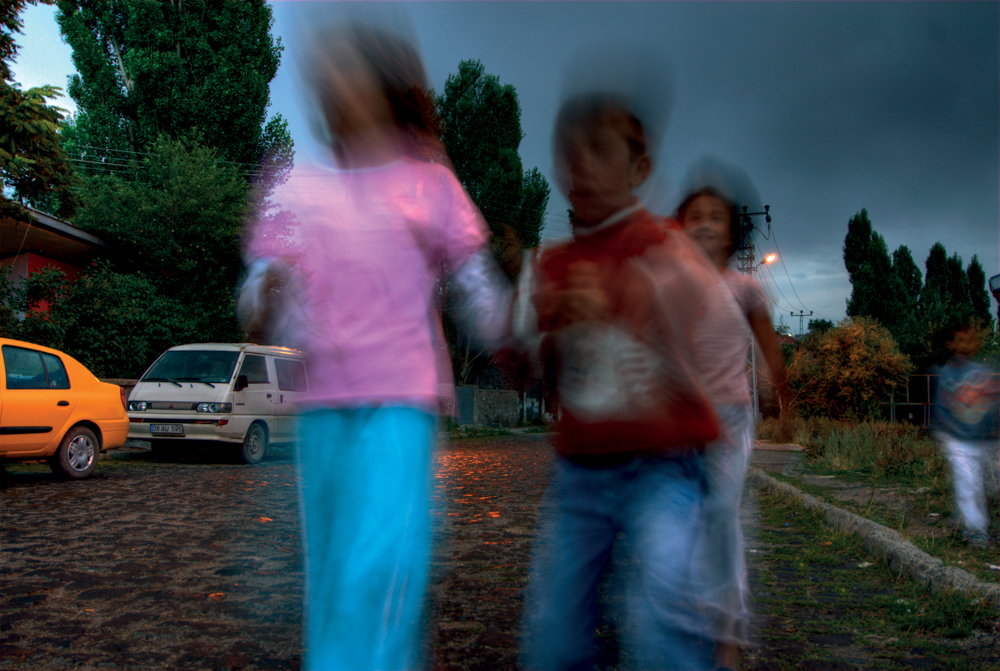 Unlike other parts of Anatolia where street begging is de rigueur, children in Kars follow you simply out of curiosity

In Bulgaria, this military campaign is still known by the battles fought in the Balkan Peninsula. Their outcome was the liberation of the Bulgarian territories, which is why the war is depicted here as an example of Russia's gratuitous help to the Bulgarians. The truth is that it was a conflict about influence – in the Balkans and in the Caucasus, where the second front was. The Russians were successful there too, capturing Kars and much of the territory around it.

Russian rule changed the town. The newcomers transformed the place – as far as this was possible – into a European town. Alongside the medieval Armenian churches, Seljuk and Ottoman mosques, bridges and hamams appeared houses that could have been transported directly from Moscow or St Petersburg. The central area of the town was completely redesigned, and an entirely new grid of streets constructed.

Kars became known in Russia as the "Small Siberia", its winters being sufficiently harsh to warrant its becoming a place where the tsars could exile those they considered inconvenient, while still showing a little mercy because of its proximity to Mother Russia. 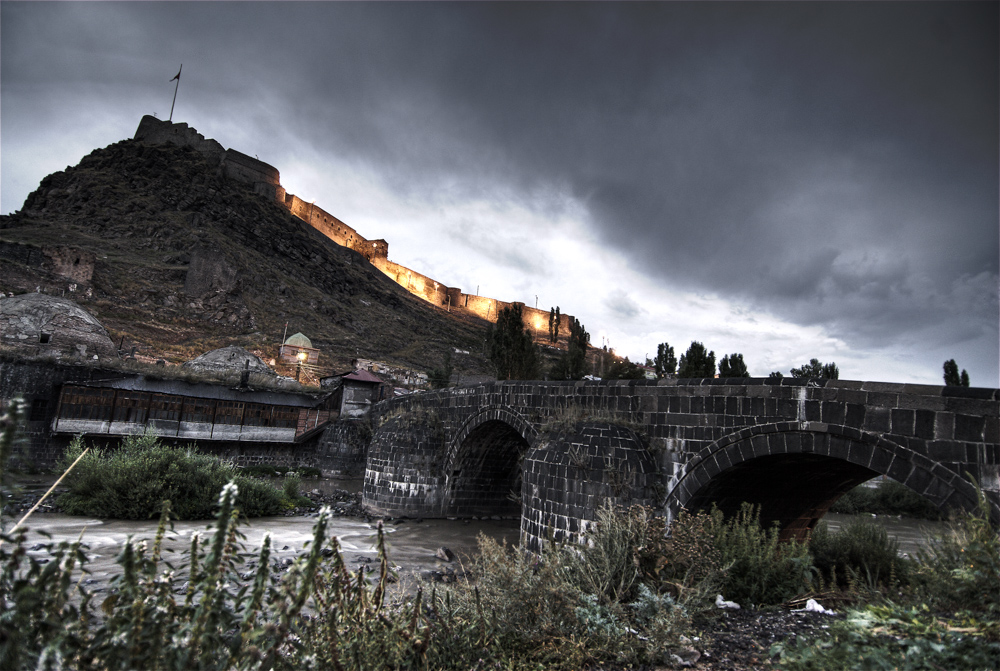 The theories about the origin of the name of Kars abound. According to one of them, it derives from the Georgian Karis Kalaki, or Gate City

In 1918 the Russians lost Kars and over the next two years it was contested between the Ottomans, those Russians who refused to bow to the Bolsheviks, and the short-lived Democratic Republic of Armenia. In 1920 the Turkish general Kâzim Karabekir re-acquired Kars for Turkey. The straight streets that the Russians left are still at the heart of Kars's central district, though the houses, with their sooty exteriors and patches of damp, look neglected and the former Russian cathedral is now a mosque.

Much more complicated has been the fate of the Armenian church, St Apostles. Built in the 930s, it was converted into a mosque in the 16th Century, became a Russian church in the 1870s, a warehouse in the 1930s and a museum in the period 1963 to the 1970s. Now it is a mosque again and has recently been restored.

The eclectic atmosphere that pervades this quiet town – which got even quieter after the border with Armenia was closed in 1993 – is complemented by another prominent figure with local connections. Georgy Gurdzhiev (1866–1949) spent his childhood years in Kars. He was a famous mystic of Armenian-Russian descent who taught that life is but a dream – death included. 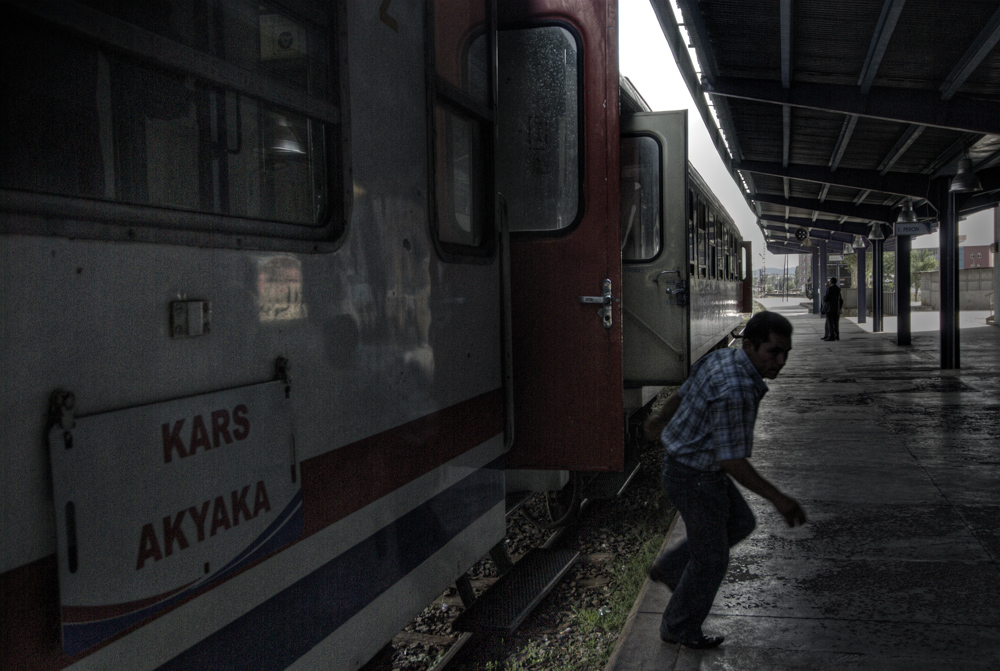 Strolling along the streets of Kars, where wide-eyed children follow each step you take, the pavement is lit by the lanterns of the grocery shops, the soft-drinks-only restaurants and the drawing rooms of the Russian houses, now inhabited by Turks and Kurds. When the adhān, or call to prayer, from the 18th-Century mosques fills the evening air, you could easily fall under the spell of Gurdzhiev's teaching – or start believing that you have really been transported into Snow. 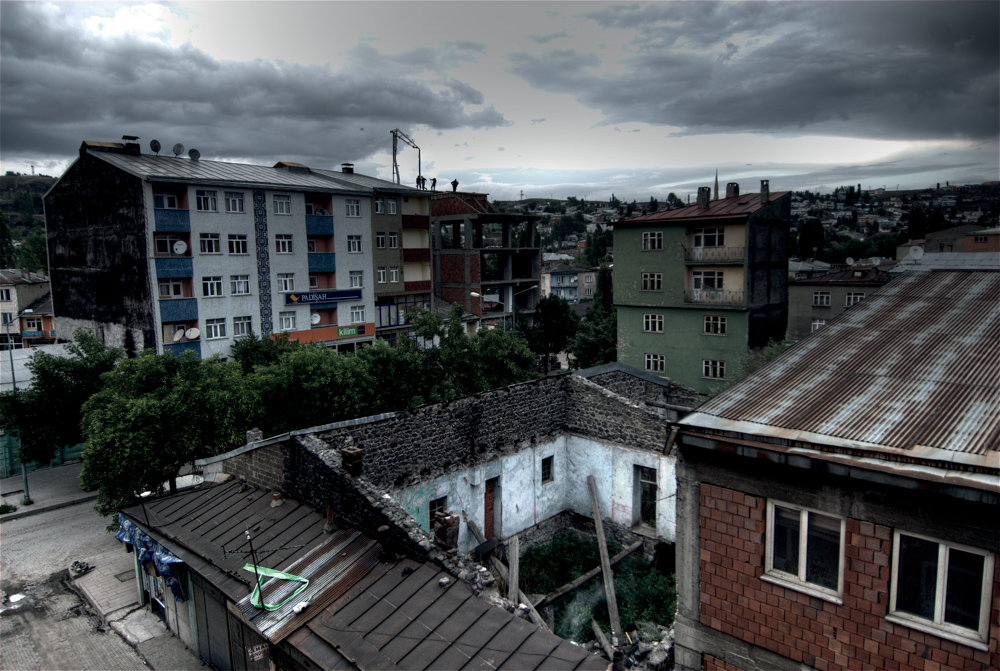 Most of people in Kars make a living of agriculture and stockbreeding. Trade drew to a halt because of the closed border with Armenia. Presently, industry is only 2.3 per cent of city's economy – compared to 13.5 percent nationwide

7 THINGS TO DO IN KARS

Explore the railway station. Once trains used to depart from here to Armenia, but after the border was closed in 1993 you can travel no further eastward than Akyaka.

And the local cheese. It's made of cow's milk and is pretty hard.

Even if you're not that keen on mutton, order a hot soup in one of the eateries. It's superb.

Explore the shoemakers' alley. It's not the tourist trap you find in places like Bodrum. The craftsmen here are involved in the day to day repairs of the cheap shoes the impoverished locals wear. 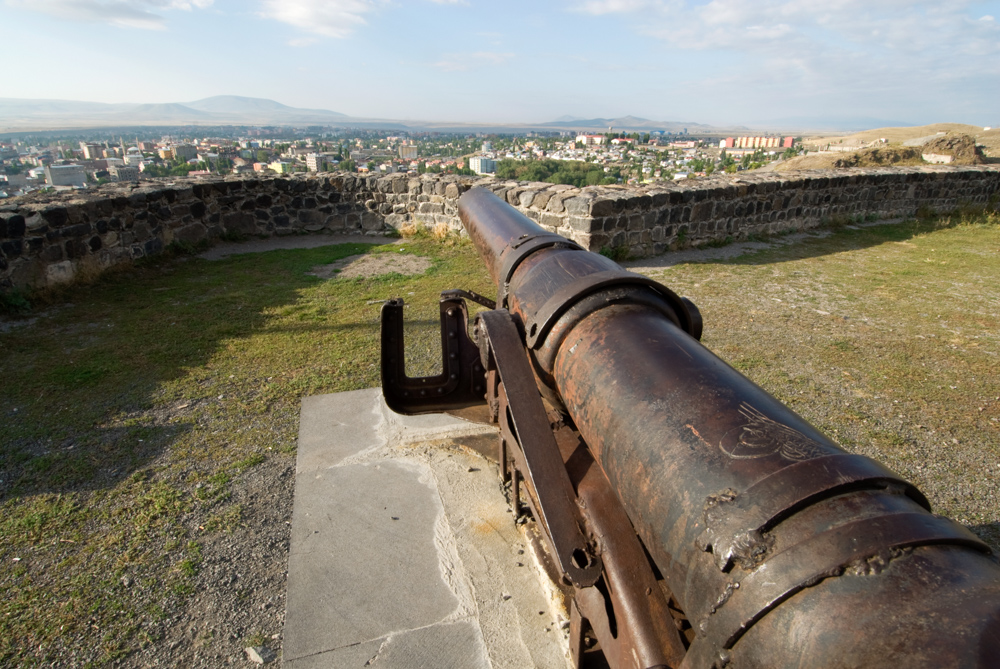 Ascend the fortress built and used by, among others, Armenians, Byzantines, Georgians, Seljuks, Ottoman Turks, Britons and Russians. It was an active military zone until recently.