MY FREEDOM VS YOUR FREEDOM

Freedom of speech suffered yet another serious blow in the EU's poorest member state when the Office of the Chief Prosecutor accused Elena Yoncheva, a TV journalist and now the floor spokesperson for the opposition BSP, of "money laundering." Yoncheva's alleged crime was that she received funding from the bankrupted KTB, or Corporate Merchant Bank, run by Tsvetan Vasilev. Her real crime, however, is that she has been critical – uncompromisingly critical – of Boyko Borisov, his GERB and their extreme nationalist allies.

Yoncheva, who was the partner of former Prime Minister Sergey Stanishev, a Socialist, produced a documentary film about the much-lauded fence along the Bulgarian-Turkish border. The fence, Yoncheva's film showed, was not only inefficient for its declared purpose, to prevent illegal immigration, but also substandard: a bit of rain made a section of it collapse and opened up a gap that took days if not weeks to mend.

The rulers were infuriated as the fence had been the darling of the extreme nationalist Valeri Simeonov, now former deputy prime minister. They could not do anything against Yoncheva at the time. So what they did in retaliation was… to declare the fence classified and off-limits, outlawing any filming of it. Nice and clean.

After Chief Prosecutor Sotir Tsatsarov announced Yoncheva was being indicted, his spokesperson clarified: "In case there is no justified evidence of criminal activity there will be no persecution." Some commentators were prompted to question the integrity of this: Is this how Bulgarian justice works? Does the chief prosecutor first accuse, live on TV, and then seek the evidence? In a law-and-order state, should it not be the opposite?

Yoncheva immediately announced that she would renounce her parliamentary immunity and cooperate with the authorities. On the following day she produced papers that reportedly proved that the Svoge section of the Sofia-Vratsa road, recently refurbished, was declared substandard the moment it was opened. That section saw a major traffic incident in August. Twenty people died. The documents Yoncheva produced implied the construction contractor had been ordered to remake the road as soon as it had opened, but nothing happened.

Boyko Borisov's road building has been the feather in GERB's hat ever since they ascended to power, in 2009.

Harassment of this kind is nothing new in GERB's Bulgaria. Prior to the Elena Yoncheva incident, Ivo Prokopiev, the publisher of the Kapital weekly, had his possessions impounded by the Seizure of Illegal Assets Commission, a relatively new body with powers to confiscate, without a court order, properties it deems of criminal origin. That commission was set up under pressure by the West solely to combat organised crime. What the West failed to see at the time was that in the hopelessly corrupt environment of Bulgaria it could only too easily be used to settle political and personal accounts. What works in the UK and Germany does not necessarily function in Bulgaria.

There is little doubt that media freedoms have been seriously curtailed in Bulgaria.

According to the Paris-based Reporters Without Borders watchdog, which issues an annual worldwide freedom-of-speech index, Bulgaria ranks 111th. Trailing behind Macedonia and Bolivia, Bulgaria is ahead of the Central African Republic, Zambia and Congo-Brazzaville. Succinctly put, it is rock bottom in the EU.

n its 2018 monitoring report on Bulgaria the European Commission confirmed its concern about the state of the Bulgarian media. The report pointed out that free and independent media were essential for the independence of the judiciary against the background of information attacks against some judges and the ongoing difficulties in finding efficient means for legal defence. Boyko Borisov, Bulgaria's picturesque prime minister, was unhappy. "Who is banned from doing what?" he asked rhetorically, and went on: "An oligarch sets up a media to cover and defend whatever he has stolen and then, suddenly, we are not allowed to touch him, whoever he may be." "Anyone with a court case over his head can set up an Internet site within hours and then claim his freedom of speech has been violated," the prime minister said.

It is under Boyko Borisov and his GERB that media freedoms in this country have plummeted so dramatically. From the relative comfort of the 2000s, when Bulgaria still eyed NATO and EU membership, to the economic crisis of the late 2000s and early 2010s, when Borisov and his lieutenants took over, media freedoms have all but evaporated.

Significantly, against this background it has become fashionable to claim curtailed freedom of speech. Some operators gladly do it because in this way they gain the much needed publicity for themselves.

In October, Bivol, an Internet site which claims it deals in investigative journalism, was particularly outspoken following the brutal rape and murder of Viktoria Marinova, a TV journalist, in the town of Ruse. An act of political repression, it said, a political assassination of a brave woman who had broadcast an interview with a Bivol journalist before she was raped and killed, an Anna Politkovskaja. Vigils in memory of Marinova, the mother of a toddler, were held and the whole of Bulgaria was sent into a frenzied state. Bivol is an associate of Wikileaks. Reporters Without Borders, who allegedly consult Bivol about Bulgaria, demanded a full investigation to verify the rapist and murderer had acted "alone" – even when the culprit had already been arrested, made a confession and pointed out he had never heard of his victim in her capacity as a journalist.

Social media also provides plenty of opportunity to claim infringed freedom of speech. Manol Glishev, who usually introduces himself as a poet, claimed Facebook had suspended his accounts, a clear indication, in his opinion, that his ideas were uncomfortable to the rulers. Glishev rose to prominence in 2013 when he was one of the figureheads in the mass protests that brought about the downfall of the short-lived government of Plamen Oresharski. Why his FB accounts were suspended can perhaps be deduced from some of his posts in which he openly calls for violence against the current rulers whom he "hates more than even the Communists" and who, in his opinion, should be put in graves covered in "blood and sh*t".

Unfortunately, the responses to the incidents described above has not been particularly even-handed. Glishev's fans were up in arms when they read FB had kicked him out. Freedom of speech champions have flocked in defence of Prokopiev. But they have carefully abstained from putting in a word for Yoncheva, possibly because she belongs to the BSP, the heir to the Bulgarian Communist Party, and therefore is not in vogue.

Double standards are nothing new in post-Communist Bulgaria, and the current state of media freedoms is fertile ground for both futile philosophising and hypocrisy. In the meantime, the agencies of the state under GERB, which spent millions of EU cash on advertising with "friendly" media continue to make any uncomfortable journalist redundant, often under the guise of legal action.

Thankfully, journalists in Bulgaria do not get shot. They usually do not get arrested either, except in the middle of the night by some village cop who's seen something "suspicious" in a farming field. But they can easily be muzzled out of business. If they aren't, they can can capitalise on being "repressed."

CRACKING THE AHMED DOGAN CODE
For the past 30 years there has been one unavoidable factor in Bulgarian politics: Ahmed Dogan and his DPS, or Movement for Rights and Freedoms.
LIBERAL DEMOCRACY SUSTAINS FURTHER BLOWS IN BOYKO BORISOV'S BULGARIA
Yet few expected something as dramatic as that: iPhone snaps of a half-naked prime minister sleeping across his bed, a bedside cupboard full of wads of 500-euro bills. Plus several gold ingots. Plus his favourite gun positioned on top.
BULGARIA, IN THE MEANTIME
Predictably, the coronavirus emergency has made all other events in what remains the EU's poorest and least free state look like insubstantial tidbits. With very few exceptions all media have focused exclusively on the alarmi
BULGARIA'S RESPONSE TO COVID-19
Since 13 March 2020 Bulgaria has been run by three generals and a sheriff. First and foremost comes General Ventsislav Mutafchiyski.
BALANCING OUT IN CORONAVIRUS CRISIS
Political science students all over the world are being taught in the early stages of their studies that the best way for an authoritarian government – any authoritarian government – to enhance its own powers is to use a crisis – any crisis&n
BULGARIA'S 'DEMOCRATORSHIP'
For a few weeks last autumn Central Sofia was paralysed by mass protests.
WHY BULGARIANS ARE LEAVING BULGARIA
You don't have to be in the construction business, or in any other sort of business for that matter, to see that Bulgaria over the past decade has increasingly experienced workforce shortages in anything from service personnel in the restaurants and the hot
FOOTBALL PITCH OUTRAGE HIGHLIGHTS DEEPER PROBLEMS
Those Bulgarians old enough to remember 1994 are now appalled because in 2019 Bulgaria marked its worst ever loss, 0-6. To add insult to injury, the loss happened in Sofia, at the Stalin-era national stadium called Vasil Levski.
WHO BROKE INTO NATIONAL REVENUE'S COMPUTERS?
The latest scandal to grip Bulgaria has affected about 6 million Bulgarians.
WHO ARE THE MAIN PLAYERS IN BULGARIAN MEDIA?
Under Boyko Borisov, Bulgaria, ostensibly, has all the trappings of a democracy. Elections, generally pronounced by international observers to be free and fair, are being held once in a while. Freedom-of-speech is a constitutionally guaranteed right.

THE MOST POPULAR AND HIGHEST RANKING ORTHOPEDIST IN BULGARIA IS A GREEK
PHILIPPE ROUVRAIS: HOW TO SUCCEED IN TURBULENT TIMES
Issue 167-168
FORTIFIED BULGARIA, PART 1
Issue 158
ACRONIS GLOBAL CYBER SUMMIT FEATURES A LINEUP OF THOUGHT-LEADERS ON THE FUTURE OF MODERN CYBER PROTECTION
NESEBAR
Issue 167-168
SOITRON: FLEXIBLE AND CLEVER IT SOLUTIONS
SAFECHARGE: WELCOME TO THE FUTURE
Issue 163
ELLIPSE CENTER: THE STORY BEHIND THE LEANING TOWER
Issue 126
RIBNOVO WEDDINGS
Issue 86
WHAT IS A MUTRA?
Issue 166
ALEKSANDAR HANGIMANA: THE ART OF FINDING TALENTS
Issue 146
NZ KILLER 'INSPIRED' BY BULGARIAN HISTORY
Issue 150 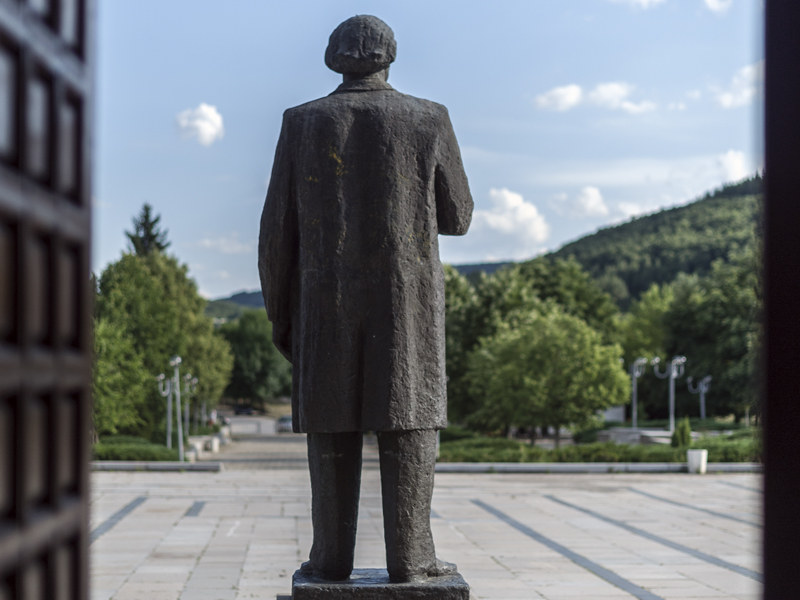 WHO WAS GEORGI DIMITROV?
In central Sofia, between what is now the National Art Gallery and the green garden of the National Theatre, the