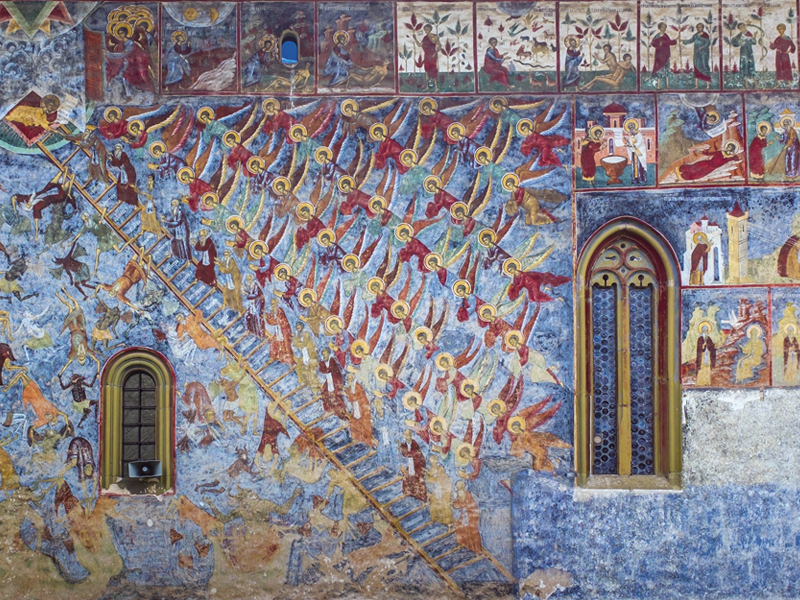 The steep road to Heaven: a fresco depicting the Stairway of Virtue, in Suceviţa Monastery. While sinners fall to eternal damnation (to the left), Paradise is still there (top right)

The crowd fills the churchyard, candles flicker in the dark, and the air vibrates with the voices of men proclaiming "Christ is risen!". Midnight has just passed, but those gathered at Humor Monastery are in no hurry to leave. They kiss the hand of the priest, light their candles from his, and exchange the customary Easter greetings with their friends, relatives and neighbours.

Then they leave the monastery, strolling along the alley which in daytime is packed with the stalls of souvenir sellers. They cross the road and enter the cemetery of Humor village.

It is dark there, darker than in the unlit streets of the village, but soon the graveyard is illuminated – each visitor leaves a candle on the tombstone of a loved one, a relative, a friend.

The people linger for a while, and then leave for the Easter feast of meat, with sweet bread and painted eggs, which awaits them at their homes.

Many of the UNESCO World Heritage sites have the stagnant air of museums where time moves only during opening hours, and the only living souls around are the visitors and the staff. The painted churches of Bukovina, however, are the complete opposite of this. They are still a vital part of the community life, and there is no better time to visit them than at an important Christian feast, such as Easter, or Christmas.

Bukovina, on Romania's north-east border with Ukraine and Moldova, is one of the least known parts of the country – for foreigners, that is. It lacks the ambitious, early 20th Century grandeur and the modern vibe of Bucharest, the magnificent landscapes of the Carpathian mountains or the combination of mediaeval sturdiness and Baroque coquetry of Transylvania. Also, it is very far from anywhere. 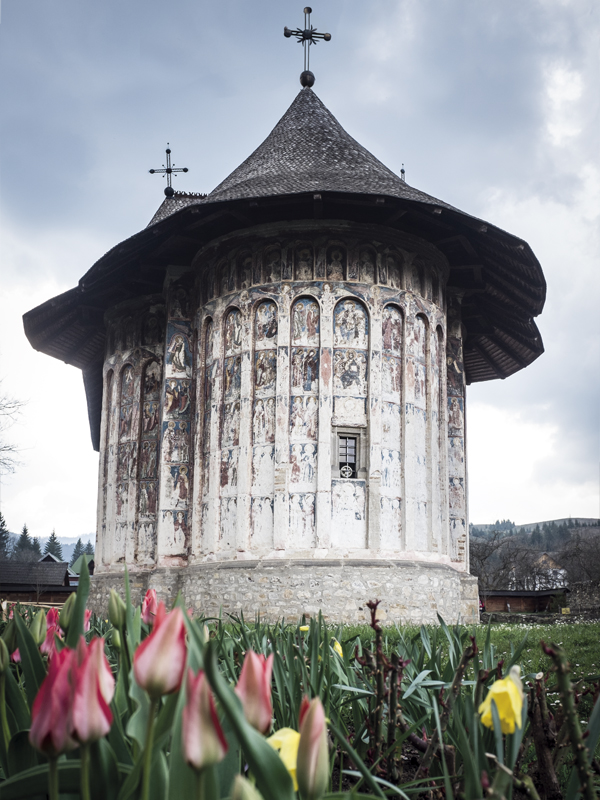 The church of Humor Monastery

Bukovina is all rolling farmlands and fields, and low Carpathian hills. Iași, the biggest city in the area, has less than 400,000 inhabitants; a sleepy ghost of what in the 19th Century was a leading economic and cultural centre.

In such an atmosphere, the village communities preserve some of their vitality, notwithstanding the migration of the young to more attractive places such as Bucharest and Italy. The villages are particularly lively during the long holidays, when many emigrants return to see their families, and Romanians from all over the country arrive to spend some days in the clean air and enjoy the hearty local food.

The churches and monasteries of Bukovina appeared in the 16th Century, an era when this part of present-day Romania was under the Principality of Moldavia, struggling with the Ottoman conquest. Built mainly by King Stephen the Great (1457-1504) and his illegitimate son, Petru Rareş (1527-1538 and 1541-1546), these churches are a charming combination of local architecture featuring heavy wooden roofs with wide eaves which look like Gandalf's wide-brimmed hat, and of the pointed arches and exquisite details of Gothic cathedrals. 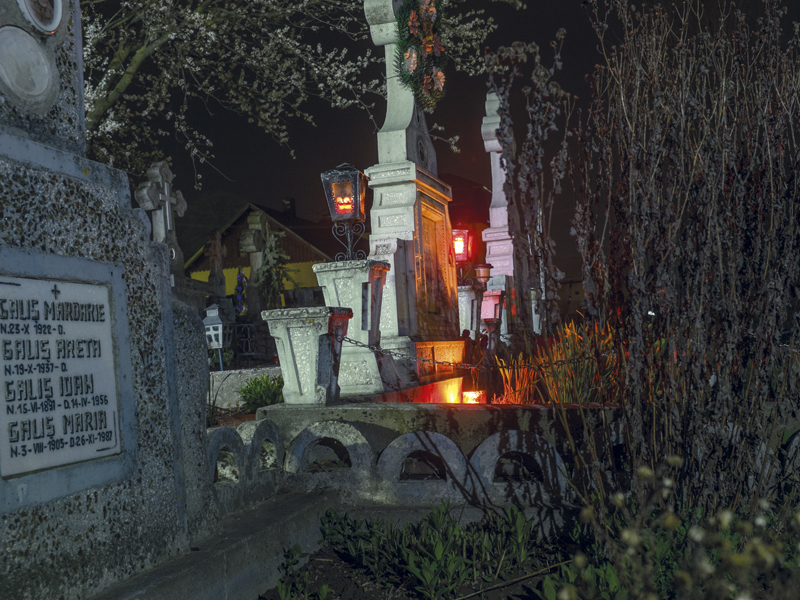 The fact that Gothic in Bukovina appeared decades after it went out of fashion in Europe is not that strange, as the region was far from the heart of the continent and the latest architectural trends there.

The same goes for the frescoes, which cover – where they have not been destroyed by the elements – each square centimetre of the insides and the outsides of the churches. Vividly colourful, they depict thousands of men and women, beasts, angels and demons; a late incarnation of the Byzantine artistic tradition.

The Moldavian rulers did not built these beautiful confections only out of piety. They saw them as a political statement, a brick and stone promise that they would keep their independence from the Ottomans.

This promise was never completely fulfilled. In spite of his countless battles with the invaders, King Stephen the Great eventually became a vassal of the Ottoman sultan. In the following decades, the Ottoman grip over the principality strengthened, resulting in the 18th Century in the replacement of local dynasties with the rule of envoys appointed from Constantinople.

Created in this same period, united by the same ideas and architecture, the churches of Bukovina each have their own character.
Voroneț Monastery, near the town of Gora Humorului, is the most famous of them all. It was built by Stephen the Great in 1488 to commemorate his amazing victory over the Ottoman army at the Battle of Vaslui in 1475, in spite of being heavily outnumbered. The frescoes have a mesmerising quality, probably because the main colour scheme is blue, whose calm hues bring a strange serenity to the most famous fresco in the church, the Last Judgement, where the fiery red river flows into the mouth of Hell, carrying within its bright torrents numerous sinners. 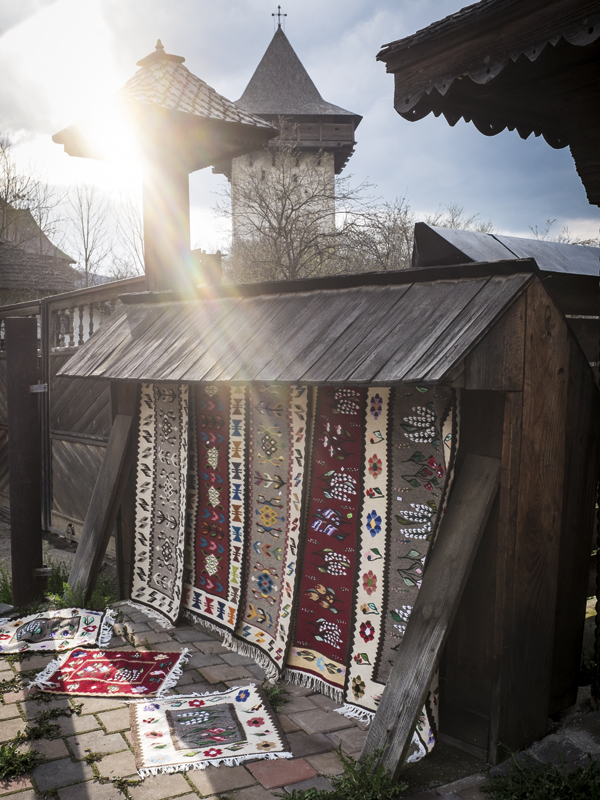 The Moldovița Monastery was built in 1532 by Prince Petru Rareş and, like most of Bukovina's monasteries, is protected by a strong fortification wall. The murals here are warmer, with yellow dominating the colour palette, and it is easy to spend long minutes exploring the patriarchs and heroes of the genealogical Tree of Jesse.

Here is also another, more ominous fresco. In theory, it depicts the Persian siege of Constantinople in 626, when the city was supposedly saved by the Virgin Mary. However, the author of this mural clearly had another, more recent, event in mind as inspiration for the scene – the Ottoman conquest of Constantinople in 1453. The fresco was clearly a political message by Prince Petru Rareş to the people who came here to pray. Moldavia, however, had to wait until the 19th Century to regain a modicum of independence.

Probota Monastery, another popular site among Bukovina's churches, was also built by Petru Rareş, in 1530, but in spite of its impressive monastic quarters and high defensive walls, it is now too manicured and too touristy to be an authentic experience. The rest of the churches, like that in Humor village, are in pleasant contrast to this. They are smaller, more like doll's houses, with stronger links to the everyday life of the local people who come there to pray, UNESCO or no UNESCO, just as their forefathers did, centuries before. 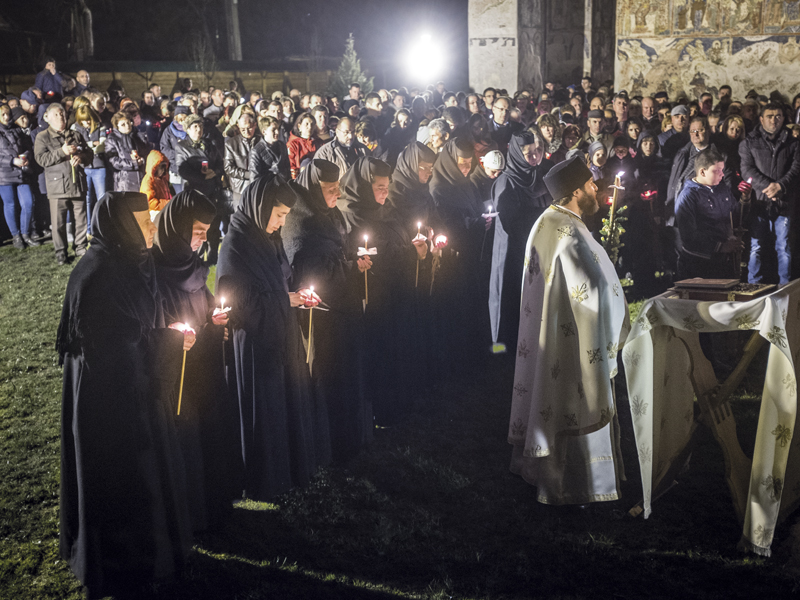 Easter in Bukovina's painted monasteries is a solemn affair