FOR YOUR EYES ONLY | VAGABOND Skip to main content

FOR YOUR EYES ONLY

"When do you change the rope?" My question is left hanging in the air because the white-bearded monk to whom it is directed seems too busy with his primitive hoisting device. Accompanied by an incredible squeaking, he is pulling a huge rope basket out of a 300 metre deep abyss. Inside this ancestor of a lift there is another monk, humbly squatting. When the basket finally reaches the top and the man inside it has jumped skilfully onto the wooden platform, the white-bearded monk turns to us.

"The rope," I repeat my question, "When do you change it?"

"It's God's will, my child," comes the answer, giving us abundant food for thought. Nowadays, the ropes are strong, made of synthetic fibre and the primitive contraption is seldom used for hoisting up people. It is more of a paid photo opportunity and tourist attraction. More often than not, you only see crates of fruit and vegetables being hauled up. But before the road and bridges to the Meteora monasteries were built immediately before the Second World War, the hoisting devices provided the only means of access to the top of the stone pillars. The ropes at that time were woven by hand from hemp and put to use until they snapped. That is why the monk's answer: "It's God's will", feels somewhat sinister to us. 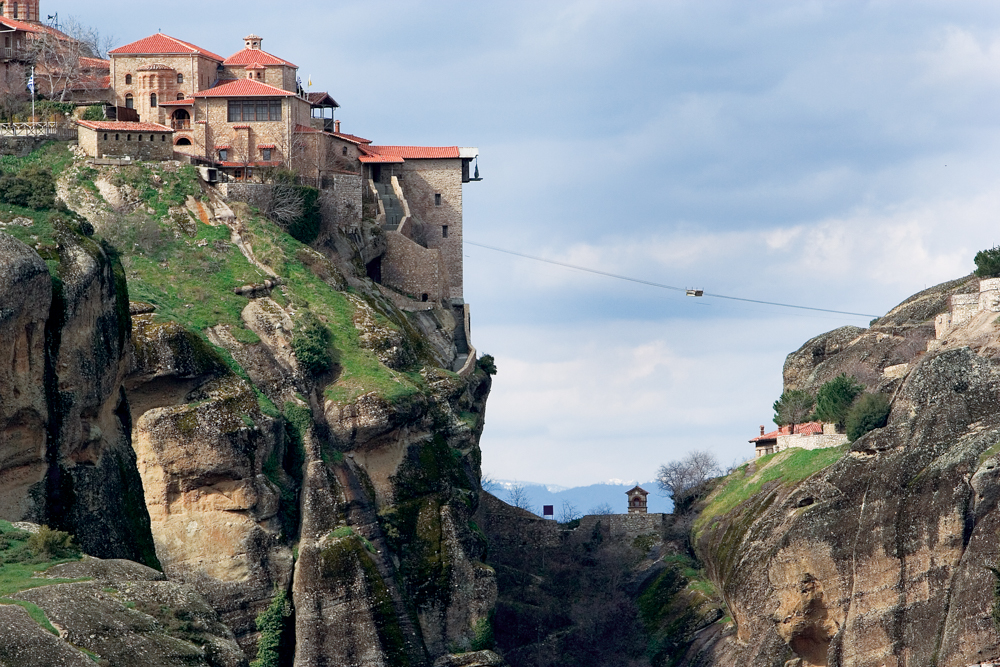 The unearthly lanscape with its high stone pillars crowned by monasteries was chosen as the shooting location for a James Bond movie. It has also provided inspiration for nu-metal band Linkin Park's eponymous album. Despite, or perhaps thanks to, the incessant camera flashes, camcorder hum and tourist bustle, a few dozen Eastern Orthodox monks live here a humble life of seclusion, somewhat closer to God than the rest of the world.

The Greek Meteoros means "hanging in the air". About 10 million years ago, the artistic stone colonnade was part of a seabed, but tectonic movements pushed the whole region up above water. Squeezed in tightly by the surrounding mountains, the ground cracked and water started to run through the deep crevices, gradually eroding away the earth and leaving these strange islands towering into the sky.

The first hermits came to live in the Meteora caves in the 11th Century. The construction of the first monasteries started in the 14th Century, at the time of the disintegration of the Byzantine empire and the Turkish invasion. It was then that the monks started to turn the upper parts of the stone pillars into fortresses, securing a safe haven from the periodic bloodshed in the region. 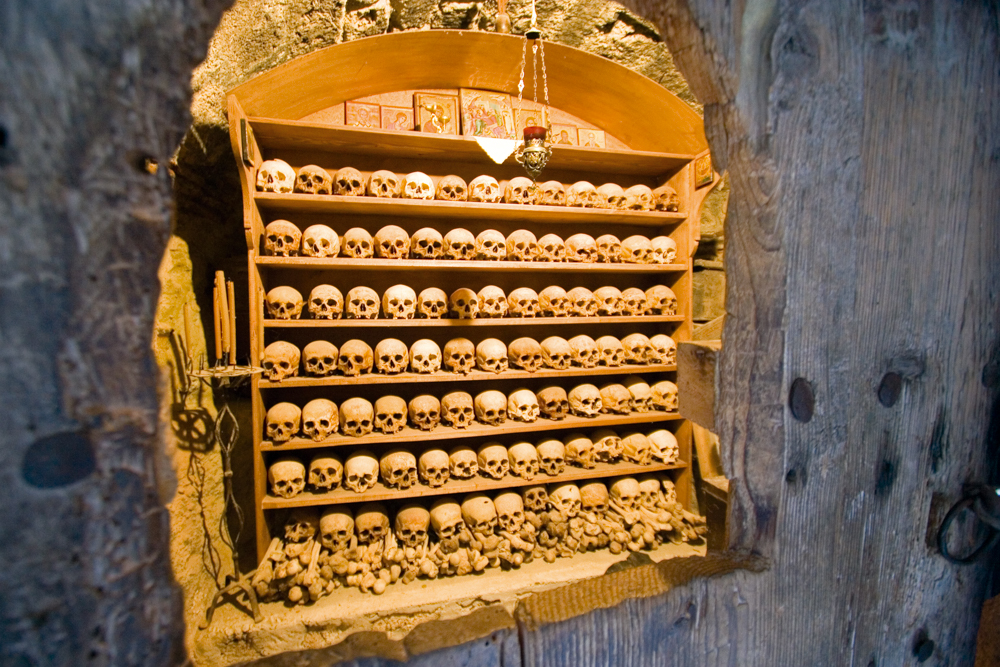 An ossuary at Meteora

In its heyday, this strange church colony consisted of 24 monasteries. Some of them were tiny, others resembled small towns. The monasteries are typical examples of Orthodox architecture: a central courtyard, sheltered from the wind, and surrounded by monks' cells, a chapel and a refectory. It's easy to see why the monks were drawn to this location as the breathtaking views inspire religious contemplation.

Only six monasteries have been fully preserved and are still active today. It is possible to complete a full sightseeing tour on foot in a single day quite comfortably.

Moni Megalou Meteorou is the largest monastery. Its gates are guarded by modern day versions of Scylla and Charybdis, the monsters from Greek mythology, in the guise of a couple of seemingly helpless old Greek ladies dressed in black. From afar they look just like ordinary worshippers, but once they have you in their sights they spring into action, shouting in a number of European tongues while waving tourist leaflets in the air in an attempt to coerce you into buying one. After surviving this siege, you are confronted by 300 stone steps leading to the monastery. The view from the top, however, makes it all worthwhile. 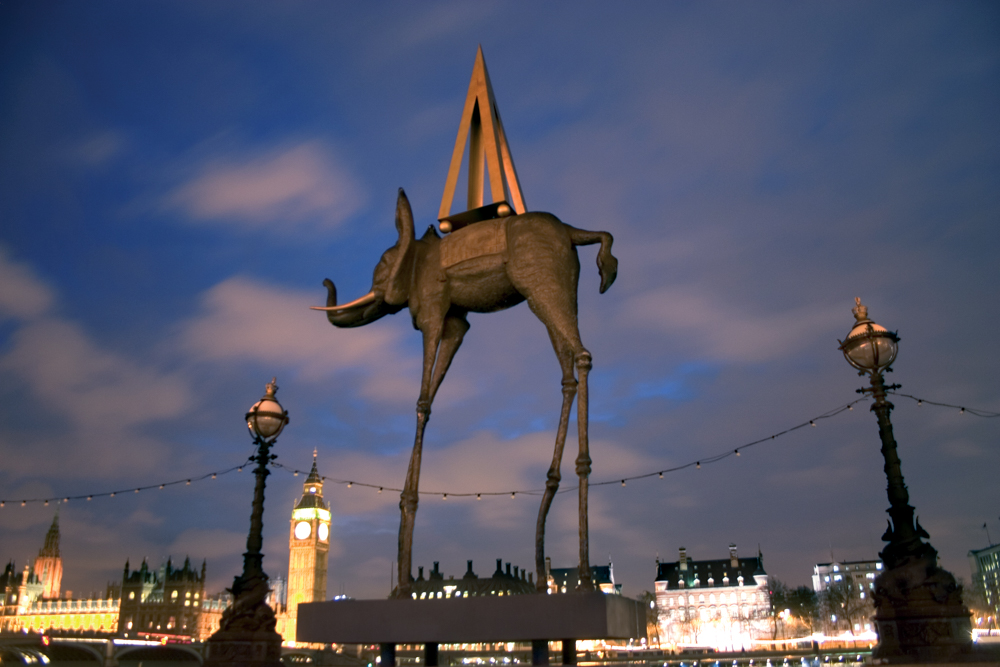 Salvador Dali was inspired by Meteora for his Temptation of St. Anthony and Space Elephant

Moni Megalou is a very significant place in the history of the Balkans. The monastery was founded in the 9th Century, but it was not until the rule of the Serb dynasty of Uros that it came to full prominence and splendour. It was there that Emperor Simeon Uros took holy orders and gave up his crown. Before that he had spent almost all of his fortune on enlarging and decorating the holy place.

The walls of the central nave are richly covered with frescoes, impressive for their beauty and their violence. The scenes depict the slaughter of Christians by the Romans. The magnificence of the interior detail is indicative not only of the large amount of wealth invested by the Urosh dynasty but also of the indestructibility of the fortress walls that have survived dozens of attempts at onslaught and pillage.

The monastery has a small museum, which houses a random collection of documents, traditional attire, photographs from the Balkan Wars, postal stamps, weapons, copies of holy scriptures, and the inevitable large stall of local souvenir kitsch: hour-glasses filled with coloured sand, evil-eye protection amulets and the like. Among the documents we were surprised to see a letter of thanks from the municipality of the Bulgarian town of Varna for humanitarian aid sent by the Greek Patriarchate. 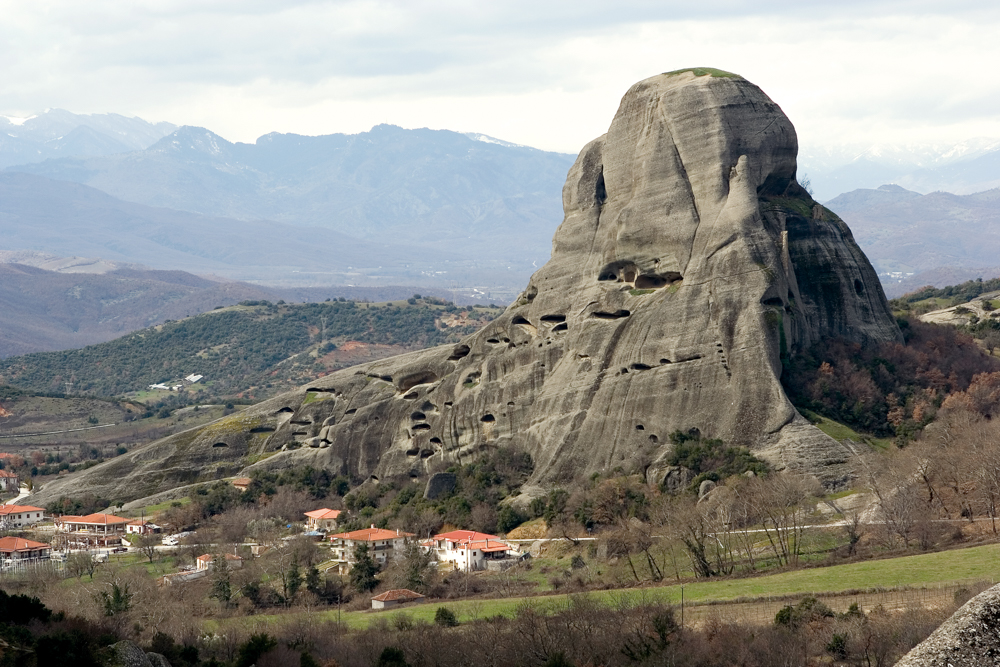 A stone bridge leads to Moni Agias Varvaras Rousanou, whose beauty sets it apart from the rest of the monasteries. The sunlight filtering down through the stained-glass windows of its church makes a magnificent display. Moni Agias Triadas' interior is impressive. In 1981 it was chosen as the shooting location for the Bond movie For Your Eyes Only. It has also recently achieved world wide fame because Linkin Park, impressed by the monasteries and their surroundings, entitled their latest album Meteora.

It is not just the monasteries that make Meteora a major tourist attraction. Recently it has become a popular destination for rock climbers from all over Europe. The stone pillars offering different degrees of climbing diffi culty, from 2 to 8, attract large numbers of thrill seekers. Every year, over one million visitors stay in the nearby small town of Kalambaka, the starting point for exploring the region. You can also spend the night in the village of Kastraki. It is the last settlement before Meteora and is part of the stunning scenery. Dinner over a bottle of retsina under the moonlight here will surely leave you with memories to last a lifetime.

Trip duration from Sofia by car: 6-7 hours (customs delay not included).
Altitude: 680 metres.
Most overcrowded period: Orthodox Easter.
Dress code: Men are not allowed to enter the monasteries in shorts, women should not expose their legs or shoulders.
No reason to worry: Large scarves and slacks to cover yourself up with are provided free of charge at the entrance to each monastery.
In church: You are expected to buy and light a candle. Do not look behind the iconostasis. It is forbidden and, frankly, there is nothing much to see there.
Double room rate in Kalambaka: 40-50 euro.
Double room rate in Kastraki: 30 euro, including a tray of traditional sweets and a jug of ice-cold water.