If you don't understand or speak any Bulgarian, don't read on. However, if you intend to settle down in this country, or want to show your appreciation for Bulgarian culture or your loved one's in-laws, you are probably taking Bulgarian classes where you get taught how to say "excuse me" and "cheers," which you gladly will, to the bemusement of your Bulgarian chums.

One thing your Bulgarian instructor will probably not be telling you, possibly because many Bulgarians will be at a loss themselves, is the sometimes intricate details and innuendoes of this country's new Newspeak.
The pun is unintended. Bulgaria had plenty of Newspeak during Communism when government linguists and the media went to great lengths to devise new words and expressions for ordinary things and actions. Some of those still make the rounds among elderly Bulgarians, like the "operator of a biological unit" which used to stand in for cow-milker. One would have thought that with the change of social patterns post-1989 the lingo being used to describe some aspects of the world would change as well. Quite rightly so – it did change to reflect the new realities, but in many ways the old Newspeak was just converted into a new Newspeak which is equally puzzling to understand unless, of course, you know what it means. Here is an inexhaustive list of some of the most popular Newspeak words and expressions that have permeated the Bulgarian language in recent years.

The hacks love this when they have to describe someone visiting Bulgaria who is completely unknown except in some parts of Canada. The word "world-famous," when used in Bulgarian, also seeks to instil self-doubt and even guilt in whoever reads or hears it. How could we have failed to realise that someone was "world-famous"? We are sitting in ignorance here while that guy travels the universe and makes a "world-famous" name for himself...

This one is tricky. Literally it means "loving one's own clan" or "loving one's fatherland." Usually, it would translate as "patriotic," but there are significant nuances. You wouldn't call someone who appears in public wearing 19th century peasant attire patriotic, but he or she may well go down as rodolyubiv. Let's say the difference between rodolyubiv and patriotichen is similar to the difference between "yoke" and "occupation." Both terms are very controversial in today's Bulgaria.

"As things are done everywhere in the civilised world"

This is usually used by politicians who want to promote an idea that no one would ever touch elsewhere in the world. Monstrosities committed by the government and its agents are being justified with it. Voters should be at peace: this is how things are being done all over the civilised world.

Literally "backstage-ness" or "behind-the-scene-ness." The new word gained popularity during the 2013 street rallies in Sofia. It seeks to describe the Bulgarian system where nothing is done in the open and all important decisions are being made by some men sitting in some backroom.

Something is prestigious, for example a beauty parlour or a corner café, because it advertises itself as such. If you fail to become a customer you risk losing on some of that prestige. You will yourself end up being non-prestigious.

Prestizhen is also used to describe some completely quaint and unknown media, usually somewhere far away, which is being quoted in Bulgarian, like in "The Hicksville Star, a prestigious Western publication, wrote that Ivan Ganev is world-famous." That indeed makes Ivan Ganev world-famous in Bulgaria.

A close synonym of prestigious. Newspapers use both ad libitum. For example, "An authoritative publication in Wyoming reported that our man from Sofia..."

The word has largely lost its original meaning "one of a kind." It is now used liberally by both the media and ordinary Bulgarian speakers to mean interesting. "An unique exhibition" does not mean that is the one-and-only exhibition of its kind in the world, nor that it is the first time the world has seen an exhibition. It simply means that that particular exhibition is interesting in the eyes of its reviewer.

Conversely with capitalist. Pre-1989, it used to mean "fascist," "imperialist" or both.

A gesheftar, from the German Geschäftsführer, used to mean a crook. In German it means "manager." Now a businessman (which in English means someone who does business), which in Bulgarian means entrepreneur (who has never really been particularly honest), is something everyone wants to become.

"Made with a lot of love"

When used to describe a new bar or restaurant, or a new recipe or a new trinket this means the guy really tried hard. If applied to a baker, it would mean that the bread you are buying will be three times the price of normal bread, and will probably be non-standard.

In real property-speak, for example with a reference to an apartment in a Bulgarian town, it means that the layout of the place is such that you have to go out onto the balcony in order to reach the bathroom. When used in a sexual context, it means "non-missionary." 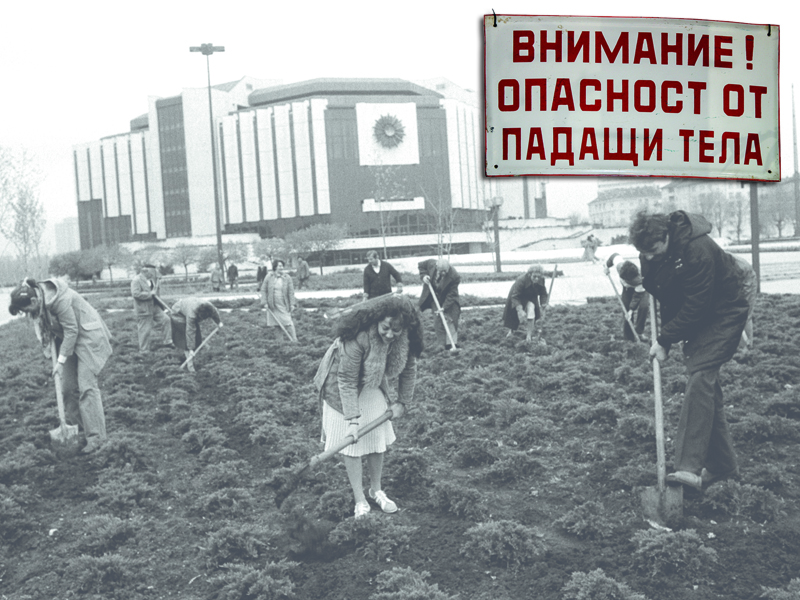 BEWARE OF FALLING SUBJECTS
In London, they urge you to look to the right before crossing the street and to mind the gap (between the train