Bulgaria is proud of its beautiful old monasteries, but most of the tourists, especially the foreign ones, usually visit only the most famous ones, like the Rila, Bachkovo and Troyan monasteries. 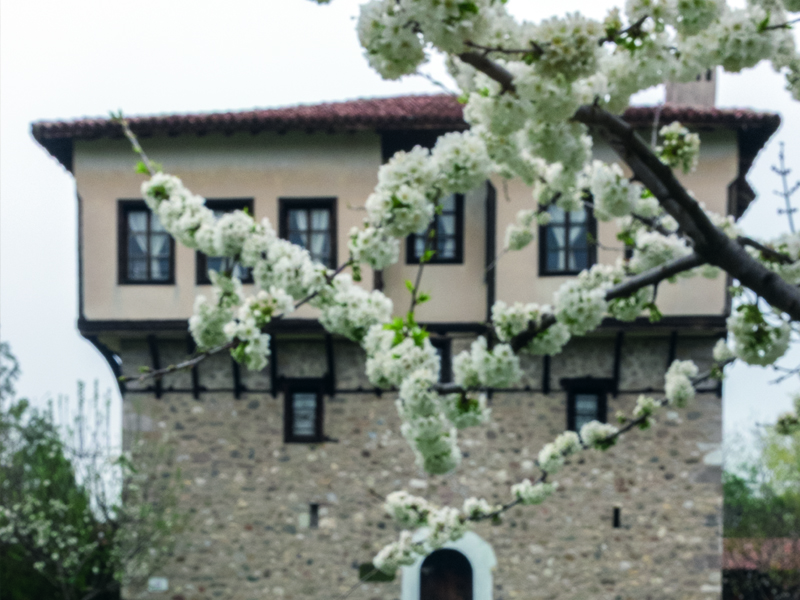 Yet, the country is dotted with many monastic complexes, which form the backbone of local tourism and religious life.

The Arapovski Monastery, about 12 km east of Asenovgrad, is one of these. Unlike most Bulgarian monasteries, Arapovo is not located at some hard-to-reach-but-picturesque corner of a mountain. Instead, it is on the fertile plain at the foot of the Rhodope.

The origin of the monastery differs according to which legend you hear. One attributes it to a local Muslim landlord. The young daughter of Arap Bey lost her eyesight at an early age, and nothing could heal her. One day, a woman in the landlord's household had a dream that there was a healing spring in the vicinity, and if the girl washed her eyes in its waters, she would see again. Arap Bey found the spring, and the spring healed the girl. Grateful for the miracle, Arap Bey donated the money for the building of the monastery, which now bears his name, as did the nearby village of Arapovo before it was renamed Zlatovrah in 1934.

The healing spring, or ayazmo, of Arapovski Monastery, is still there, in a beautiful Revival Period chapel outside the monastic complex. People continue to come here, believing that faith and the spring water will heal all eye problems, even cataracts.

The only preserved part of the monastery's original living quarters

The other story of the founding of Arapovski Monastery is quite different. It names as the founder a local brigand, Angel Voyvoda, a maverick who commanded a troop of 60 armed men, and who for years attacked the local Turks in retribution for the rape of his sister and other atrocities. Angel Voyvoda was a flamboyant character, a bear of a man who was not afraid of anything, and who often used to stay in the beautiful three storey living tower in the middle of the courtyard of the monastery.

In the 20th Century this tower, which is now the monastery museum, used to house another famous Bulgarian – the poet Elisaveta Bagryana, whose uncle was the abbot.

The rest of the monastery includes the western wing of the old living quarters, with the vaulted main gate to the courtyard, the St Nedelya Church, a belfry, and some humble auxiliary buildings. Flowers grow everywhere, the courtyard is covered in grass, and chicken roam freely around, ignored by a bunch of overweight cats.

In its heyday, the complex used to have more quarters for monks and guests, but they were destroyed in an earthquake in 1928. The church also suffered heavily – the dome you see today is a 1930 reconstruction.

Legends aside, the actual reason for the founding of Arapovski Monastery was political. The mid-1850s were the time of increased Bulgarian national consciousness and economic prosperity, boosted by the 1839 and 1856 sultan's decrees awarding equal rights to all his subjects. All this was reflected in a powerful Bulgarian movement to establish their own educational system, to bring back the Bulgarian language as the ecclesiastical language and, indeed, to have their own, national church.

The top floor of the monastic tower was comfortably furnished

Until that time, Bulgarians had to listen to mass in Greek and were part of the Greek-controlled Constantinople Patriarchy. By the 1850s, sentiment against the Greeks had grown stronger with petitions, demonstrations and even violence initiated by Bulgarians in towns and villages all over the Bulgarian lands.

The area around Asenovgrad had a large Greek population. To counter this, the Bulgarian-speaking Arapovski Monastery was created, and a Bulgarian school was opened there to strengthen the Bulgarian national spirit locally.

The school is long gone, and the monastery now has only one monk, but the intriguing Revival Period murals in St Nedelya still bear witness to these times of national upheaval. The walls of the church are covered with Bulgarian saints. Scenes of major historical events, like the Christianisation of the Bulgarian nation in the 9th Century, are painted in great detail – do pay attention to the clothes of laymen, which reflect the fashions of 19th Century Bulgaria.

Intriguingly, and probably uniquely for Bulgaria, one of the scenes depicts the last person one would expect to see in a church – the young Prince Vladimir Rasate. He ruled in the late 9th Century and in his short reign tried to reintroduce paganism to Bulgaria. For this, he was dethroned by his father, Prince Boris, and for centuries was despised by Bulgarian ecclesiastical writers – until he appeared on the wall of a church, in the little known Arapovo Monastery.