In Skopje, the present is born while the past still lives 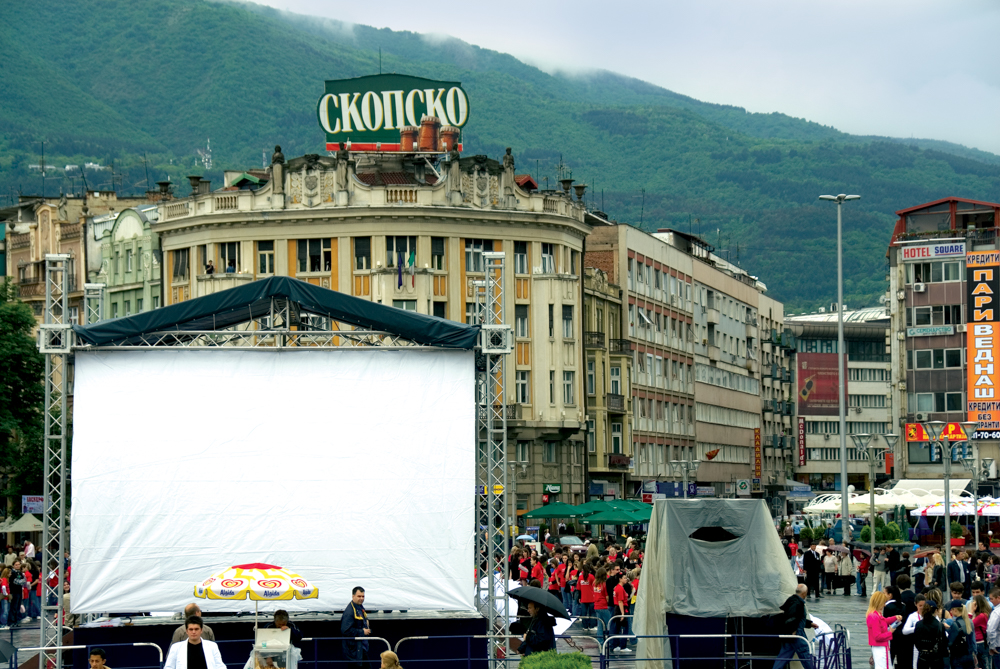 Changes in Skopje – both large and small – are often brought about by cataclysms. Locals unwillingly adapt to each new catastrophe, while keeping their gaze ﬁrmly ﬁxed on the past. Indeed, the past is everywhere. Women still wear mackintoshes and hairstyles fashionable in the early 1970s. Young people ﬂock to hear cutting-edge western DJs, but buy gold jewellery for their graduation balls from the little Albanian shops in the charshiya.

The buildings in the city centre, which appeared futuristic in the 1970s, in the 21st Century look démodé. Main streets still bear the names of heroes from Socialist Yugoslavia: Tito and the Yugoslav People's Army, or YUNA. More belligerent Macedonians are quick to ﬁght over events that happened hundreds, sometimes even thousands of years ago. Just think of Gotse Delchev, the 19th Century revolutionary, and Alexander the Great! Both are “Macedonian” to the Macedonians. But Gotse is also a national hero in Bulgaria, the namesake of the eponymous town in the South-West, and “Alexander Megalos” is one of the cult ﬁgures in Greek history...When the first people settled on the high ground near the Vardar River, there was no sign that their city would have such a turbulent history. 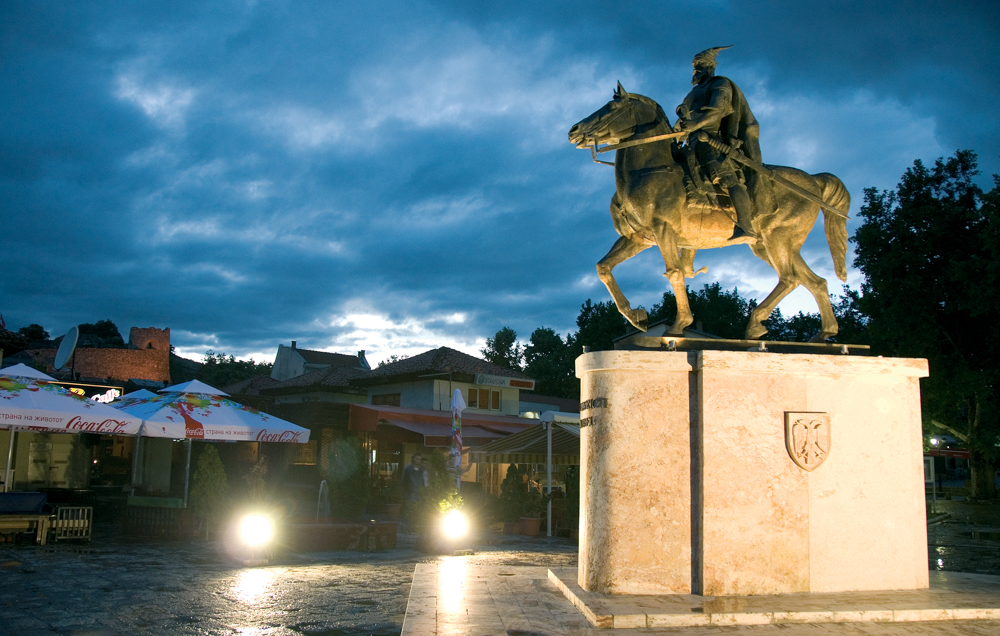 A 4 m, or 13 foot, high statue of the Albanian hero Skanderbeg in the Starata Charshiya, or Old Bazaar, is the tallest historical monument in Macedonia

For several centuries, the most newsworthy thing that happened in Scupi was its capture by the Romans during the 2nd Century and the birth of Emperor Justinian the Great, supposedly in one of the nearby villages. In the 7th Century the Slavs arrived and changed the city's name to Skopje. All through the Middle Ages, Byzantine emperors, Bulgarian tsars and Serbian kings fought with varying degrees of success for control of the city, which occupied a key place on the Vardar River trade route.Like many other arguments in the Balkans, this controversy was settled abruptly at the end of the 14th Century.

The Ottomans conquered Skopje, renamed it Üsküb or Üsküp, and made it into an administrative centre. Thus it remained until the First Balkan War in 1912, when the city was annexed by Serbia and subsequently became the capital of the Yugoslav Republic of Macedonia. That was the status quo until 1991, when Yugoslavia disintegrated and Skopje became the capital of independent Macedonia, a nation still not recognised under that name by the United Nations and neighbouring Greece.

Wandering the streets of Skopje, you'll have a hard time discovering traces of the city's long history. The only Roman relic is the humble aqueduct above the Vardar, while the Byzantines, Bulgarians and Serbs left behind parts of the old fortress. Only two or three buildings in the Secession style, which dominated the cityscape in the 1920s, are still standing. 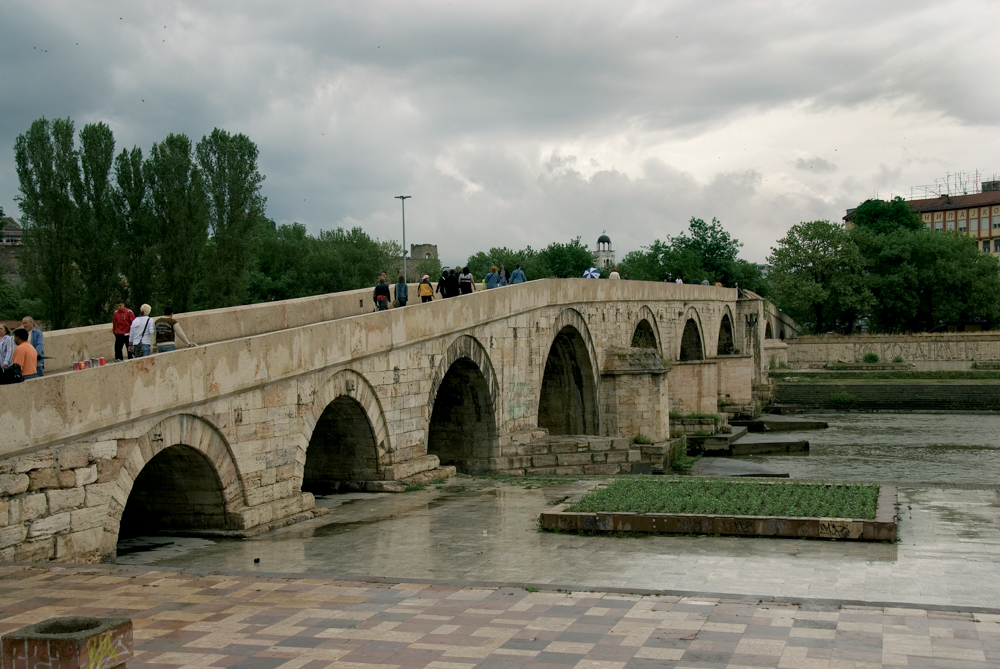 The house where Mother Teresa was born in 1910 has disappeared – in its place you'll ﬁnd a plaque and her statue.

The reasons for this lack of historical evidence are earth-shattering – well, literally. Skopje sits on an active fault line and since Antiquity seismic activity has razed the city several times over. One earthquake, however, has left permanent scars: on 26 June 1963, a quake measuring 6.9 on the Richter scale destroyed 80 percent of the city, claimed 1,100 lives and left 200,000 homeless. Skopje was built back up again with the help of more than 80 nations. It was then that the tall modern buildings sprang up on the west bank of the river, which had suffered more from the tremor.

The half-collapsed old railway station was left as it was after the disaster. The unsightly wooden divisor that blocks off the western half of the building creates a sense of tragedy that the architects in the 1970s most probably did not intend.

Marshall Tito's message of condolence written there now seems out of place: “Together with all the peoples of Yugoslavia we will endeavour to mitigate the misfortune that has befallen your republic”. By a twist of fate, the largest surviving monuments in the city are from the Ottoman period. Many local patriots believe that Justinian built the 13 arches of the Stone Bridge which emblazons the city's coat of arms. It was built, however, in the 16th Century in honour of Sultan Mehmed II. 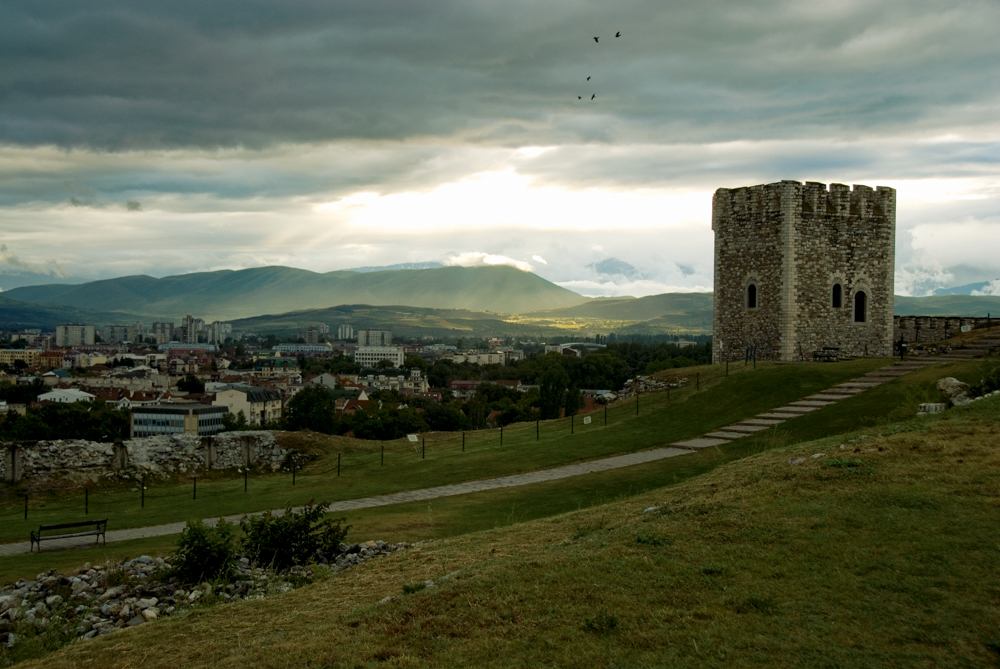 Pass by the ﬂy-by-night vendors hawking cheap wristwatches and sunﬂower seeds on the bridge, and enter the largest bazaar in the Balkans. Not counting the new pubs on the riverbank and the bronze statue of the Albanian hero Skanderbeg erected in 2006, it is also one of the most authentic. The streets and shops are packed with Albanians and Turks, and during prayer times the mosques are overﬂ owing with worshippers. The local pubs are also full – mainly with Bulgarians.

Few admit it openly, but the main reason for their visit is the food. Nostalgia for the past has saved Macedonian publicans from the errors of their Bulgarian counterparts, who after the Democratic Changes forgot how to make good old-fashioned kebabs and began to cook up exotic creations like “European” or “Mexican” salads.

In Skopje, however, eateries serve a delicious if limited menu. It includes shopska or Greek salad (local patriotism has not yet affected these dishes), as well as juicy desetka kebapchinye, or 10 little kebabs, and steaming tavche gravche, or beans baked in a clay pot. If you ask Bulgarians why they are visiting Skopje, their reply – between mouthfuls – usually emphasises “patriotic reasons”. 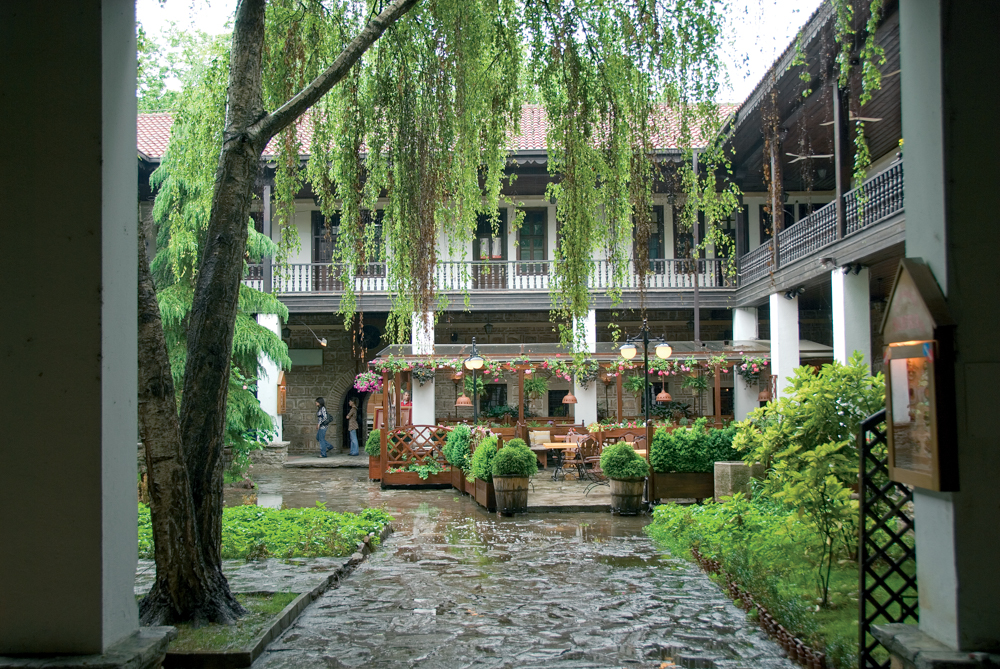 What survives of Old Skopje

They continue to consider Macedonians to be Bulgarians brainwashed by Serbian propaganda who mistakenly consider themselves a separate nation. The most unwise among them seem to come to Skopje for the sole purpose of antagonising Macedonians, while the locals themselves are so touchy about the subject that they often react equally rashly. Sometimes arguments grow into all-out brawls.

Since 2002 such mêlées have occurred regularly every January, when ethnic Bulgarians and pro-Bulgarian Macedonians place a memorial plaque for Mara Buneva on the Stone Bridge. Like clockwork, a day or two later Macedonian nationalists destroy it and both countries' foreign ministers exchange ominous notes.

In 1928 Mara Buneva killed Velimir Prelic, a Serbian senior ofﬁcial who tortured members of the pro-Bulgarian Internal Macedonian Revolutionary Organisation, on that very bridge and then shot herself. While Bulgarians praise her as a freedom ﬁghter, Macedonians consider her a terrorist. It is unlikely that the two groups will ever agree on this question or on the issue of whether the Bulgarian government in Skopje and Vardar Macedonia between 1941 and 1944 was a just administration or a brutal occupation.

Macedonians can regale you with stories of “Bulgarian atrocities” and Skopje is studded with monuments commemorating their victims. But be careful while you look at them. As I visited one such site at 8 am on a Sunday morning, an elderly gentleman came forth and accused me of being a spy! He spoke English. 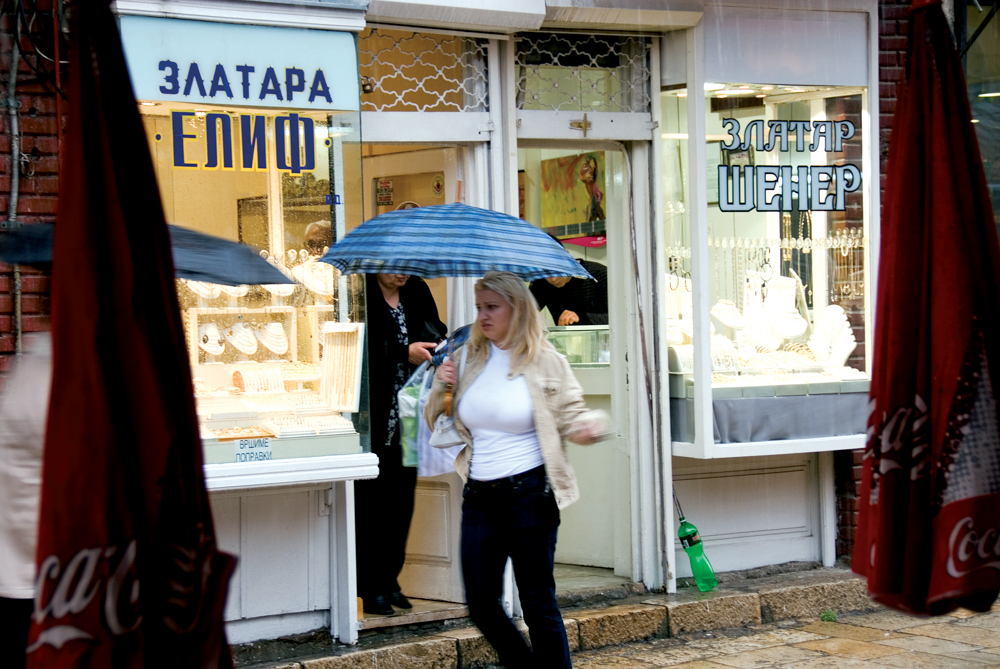 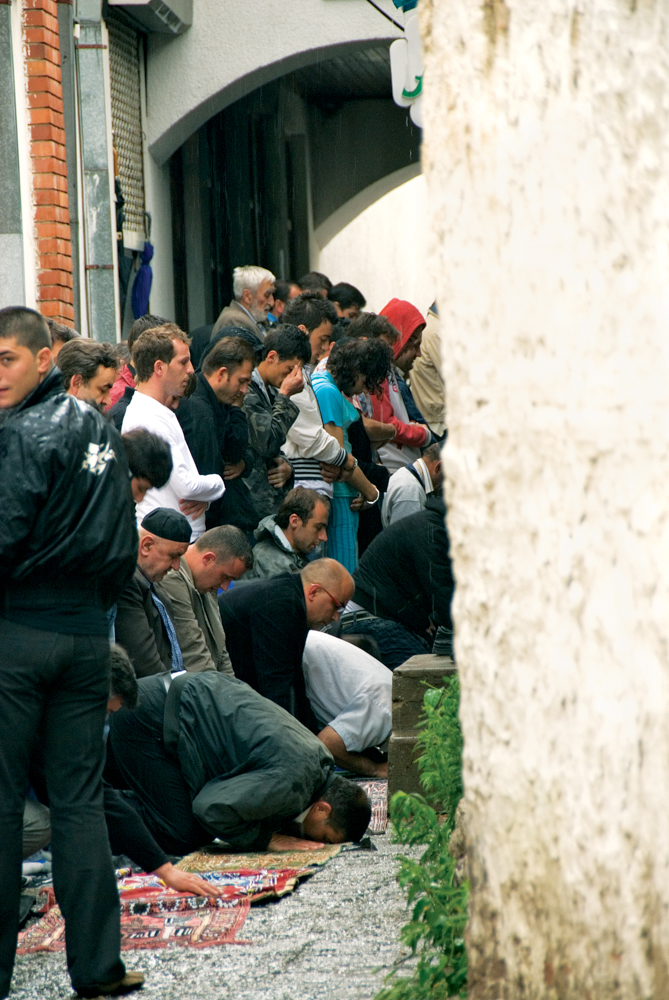 Believers pray outside an old mosque 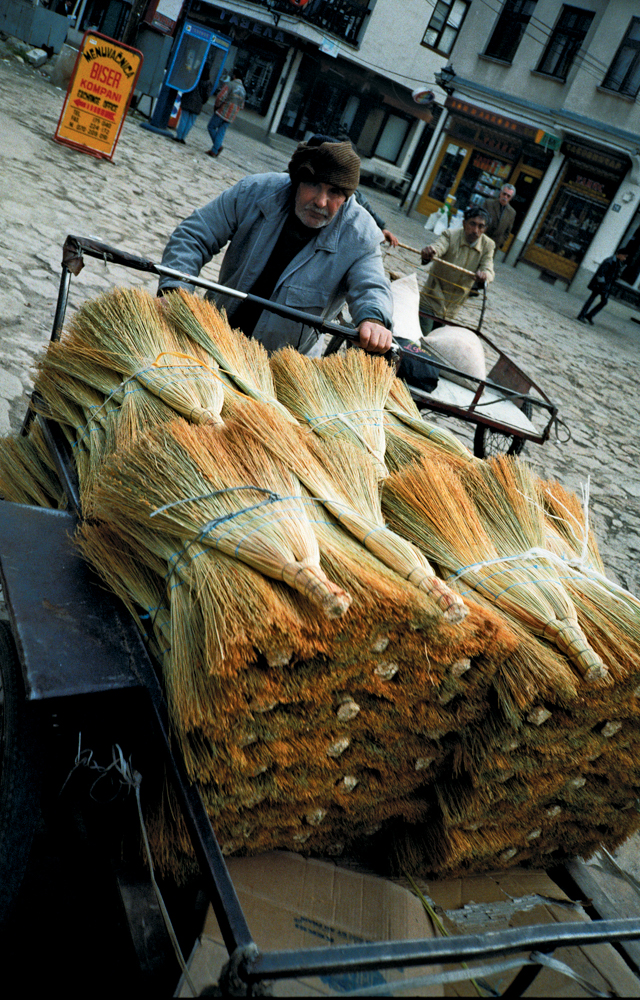