BANGKOK: EAST OF PARADISE AND BACK

The sky is grey, the colour of petrol fumes and the setting sun is a fat red blot. Rising here and there among the huts and multilevel concrete viaducts, the city skyscrapers are more diverse than anything you can see at Sunny Beach, combining the styles of New York, London and something typically Thai. 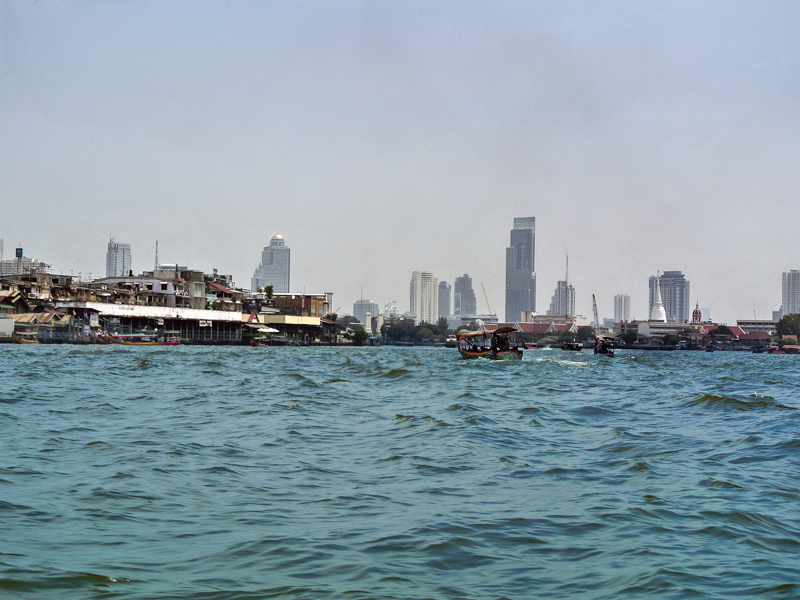 The tuk-tuk taxi is cyclamen pink and the driver's name on the sticker has more than 50 letters, most of them consonants. From the rearview mirror dangle a bunch of dried flowers, plush elephants and other paraphernalia. The driver (like all his colleagues) zooms along the roads as if he was in a Formula 1 race, but I loved the tuk-tuk, as it made me feel like a witch on her broomstick – the hot Bangkok air tousles my hair and I am ready for magic and mischief.

Once upon a time, Bangkok did not have roads, only canals, which is why it was called the Venice of the East. The Chao Phraya River flows through the town and splits into small and larger branches teeming with life. It is a miracle how the traditional Thai tailboats – those long wooden beauties with a propeller at the end of a long metal rod – weave through the long barges, the tourist vessels with restaurants, the elegant floating pagodas chartered by big hotel chains and the speedy motorboats.

If you enter the canals, you end up among picturesque pile dwellings with banana trees and blossoming bougainvilleas and jasmines. The fishermen catch their fish from the windows of their homes and wash their clothes on their thresholds. 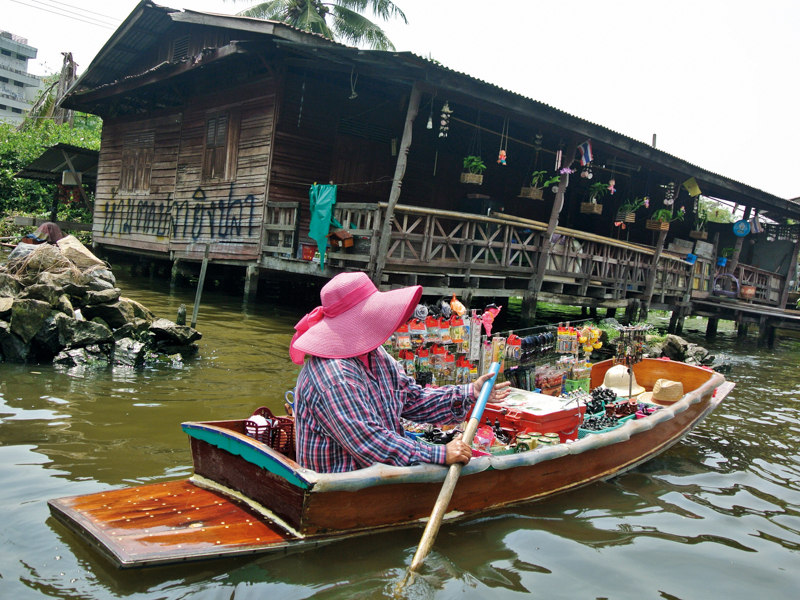 Life and trade on the waters, Bangkok style © Nadia Zaharieva

The royal palace is opulent and crowded. You quickly realise that what is worse than finding yourself caught inside an organised tour group of mainland Chinese is to find yourself trying to progress against such a tour group. There is no escape! They push and they pinch with their elbows, and not because of a lack of space, as the palace stretches over 200,000 sq.m and has more than 35 halls, houses, temples, towers, pagodas, terraces and gardens. Construction began in 1782. Opulence, it appears, was the style of the era, as the palace is decorated with marvellous murals retelling, in a Thai style, the ancient Indian epic Ramayana. There are also fine mosaics and fearsome statues of warriors.

We experienced yet more culture shock when, in the evening, we found ourselves on Khaosan Road, which is something like the Tower of Babel, only horizontal. In this quarter you can experience all human life right on the pavement: a dragon tattoo for your belly, a colourful Afro hairstyle, a foot massage. You can buy a tailored Armani suit, you can book a trip to any part of Thailand, you can exchange money.

Each year, Thailand welcomes over 20 million tourists, who spend more than $3 billion. In these circumstances, one would think that the locals would speak English and the service would be good. Quite the opposite. Thailand is one of the three countries in the world that has never been colonised or occupied, and this is probably why they treat foreigners with an aristocratic ennui. 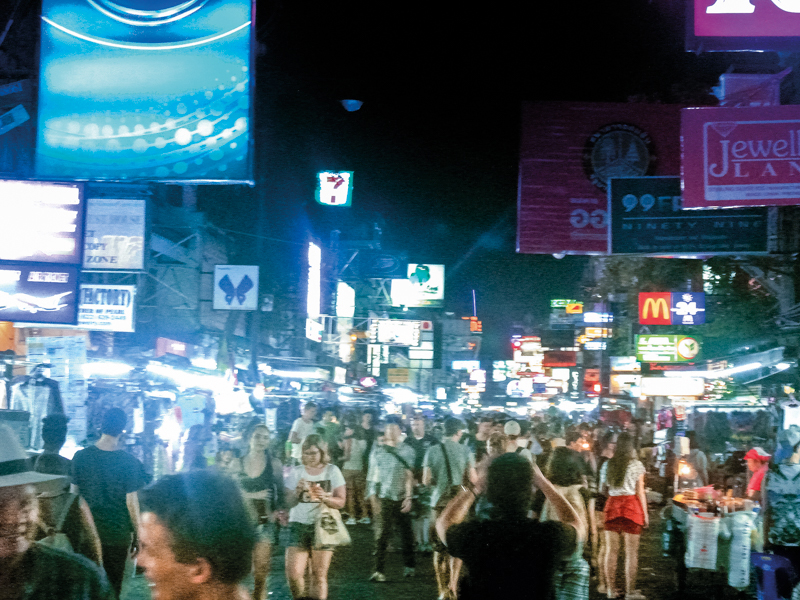 From the laneways of Chao Phraya we found ourselves in the modern part of Bangkok, which is all malls, polished granite and even more polished people. Yet here is the Jim Thompson house museum. Thompson, an American, revived Thailand's silk industry in the 1960's, when it was struggling with Chinese competition. A passionate collector, Jim Thompson travelled all over Thailand and bought statues, bas-reliefs, drawings, textiles and ... houses. Imagine that: he dismantled and moved to Bangkok six houses from all corners of Thailand and arranged them in a magical garden with goldfish ponds, winding pathways and cool hidden corners.

Packed though it is with objects of art and artefacts, the complex feels not like a museum, but like a house whose owner, Thompson, might appear at any minute, cocktail in hand. In his office, two horoscopes are on display. The first one is for 1959, when he built his complex, and it predicts a sunny, successful year. The horoscope for 1967 is menacing, and foretells great misfortune. That same year, the 61-year-old Thompson disappeared in Malaysia, while trekking along a well-known tourist path. A frantic search followed, but no trace of him was ever found, and his disappearance remains one of the great mysteries of the 20th century.

When we are leaving Bangkok, I am tempted to scream at the airport: "Wait! I want to stay!" but I don't. Instead, I check-in my big suitcase, which is full of spices and fruit. There are so many other places waiting to be discovered. 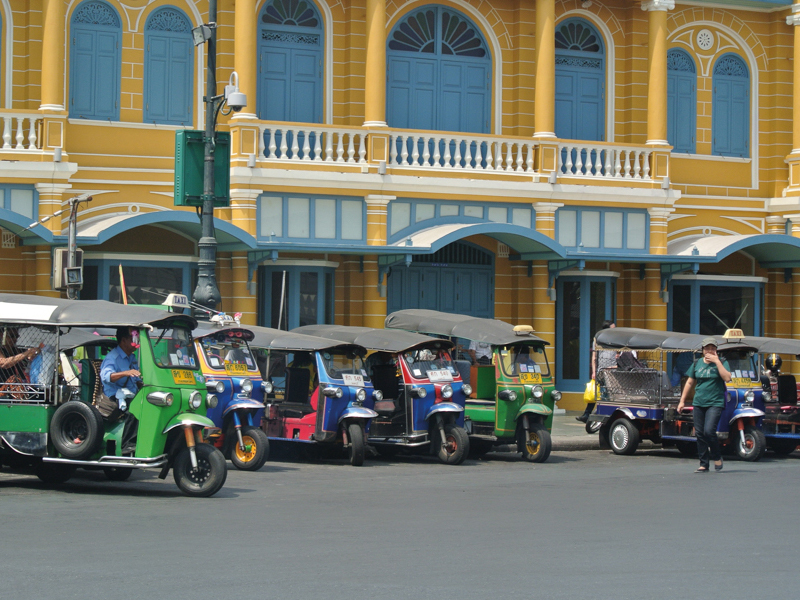 Catch me if you can: tuk-tuks rule the roads of the capital © Nadia Zaharieva 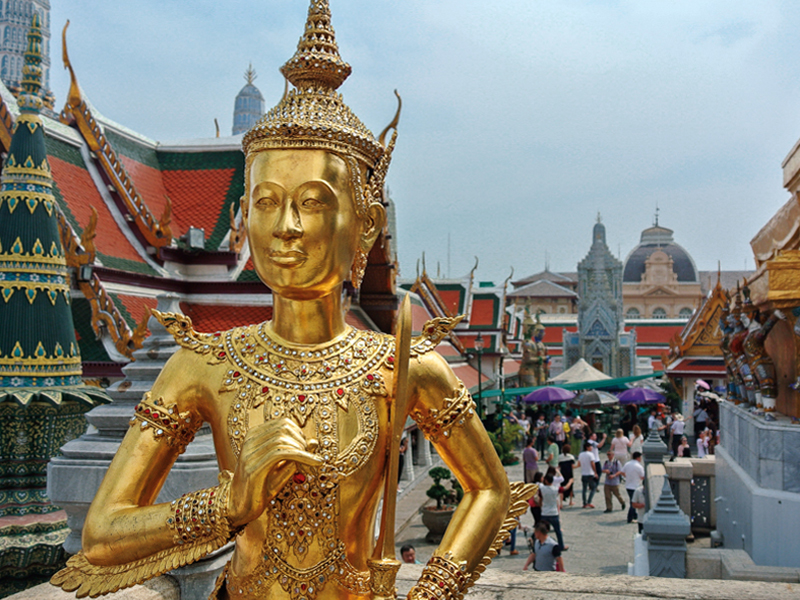 The Royal Palace: as majestic as it is congested with tourists © Nadia Zaharieva