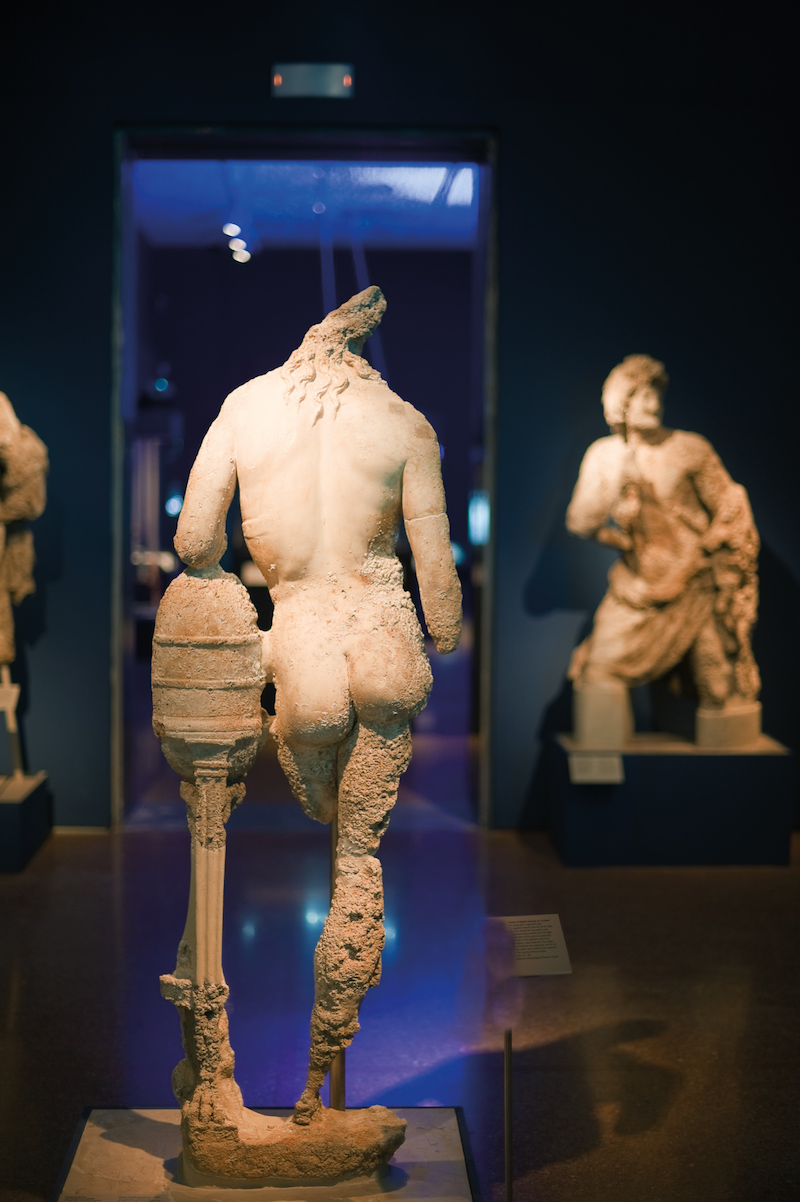 Athens has been on the tourist map for so long that it has lost the air of discovery. In high season, you have to fight with the international crowds to climb up the Propylaea, take a snapshot of the national guard or find a table in a proper restaurant. But Athens is still one of the world cities worth visiting and revisiting – here is a list of some of the places and things which make it what it is. And we won't even mention the evzones.

If you plan carefully – most days it closes at 3pm – the visit of the Archaeological Museum will be one of the highlights of your stay in Athens. Its manageably small premises showcase some of the greatest gems of ancient art: Cycladic marble idols, Minoan frescoes and the golden mask of "Agamemnon"; Egypt-influenced Archaic statues and bronze gods from the Classical era; intricate vases and Hellenistic statues. The exhibition is rather conservative, focusing on sculpture, treasures and ceramics, but there are more modern temporary shows as well. One not to miss is dedicated to the 1st Century BC shipwreck, discovered in 1900 near the island of Antikythera. The exhibition, ending on 28 April, tells the story of the wreck, the people on the ship and displays everyday objects, fine statues and the most sensational find – a mechanism for calculation of religious feasts now thought of as "the fist computer in history." 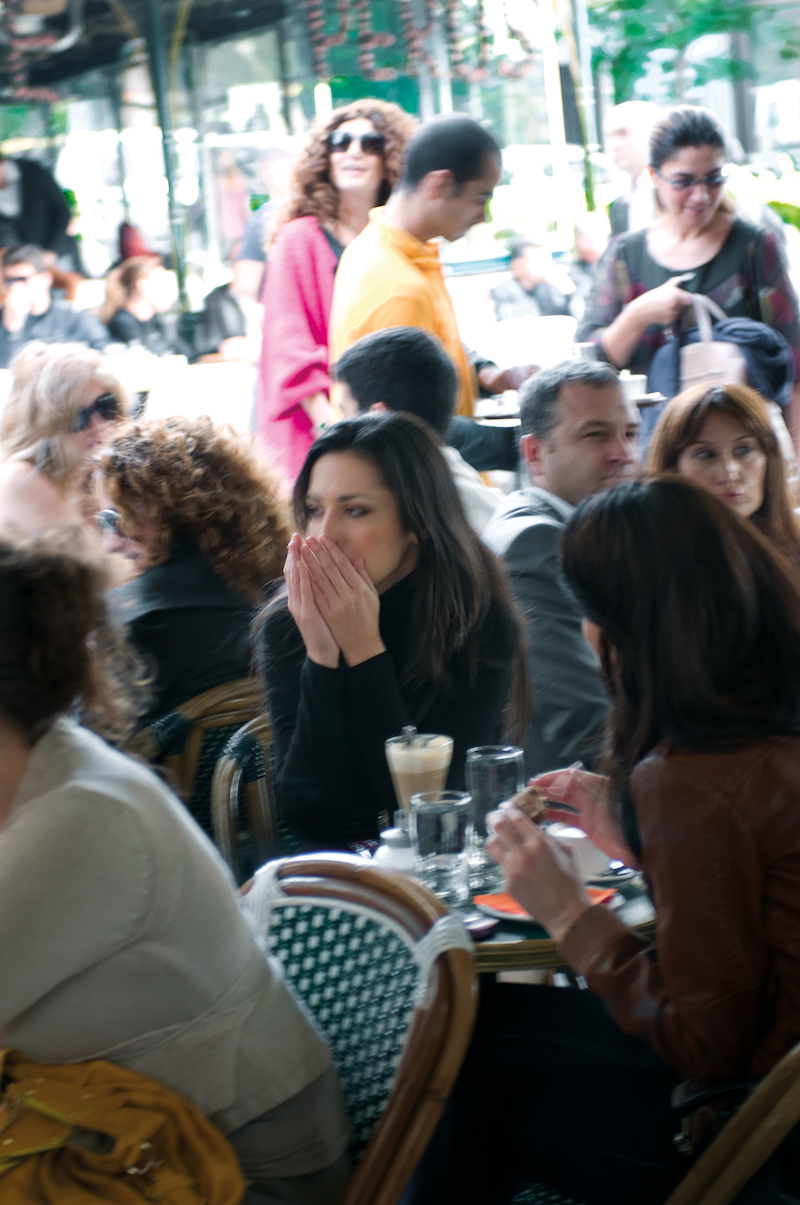 It's one of Athens longest inhabited areas, as evidenced by the Monument of Lysicrates, a 4th Century BC music competition memorial which in 1818 witnessed Capuchin monks planting the first tomatoes on Greek soil. Spreading around the Acropolis eastern slope, Plaka is predictably full with tourists. However, it still retains a laid-back atmosphere. 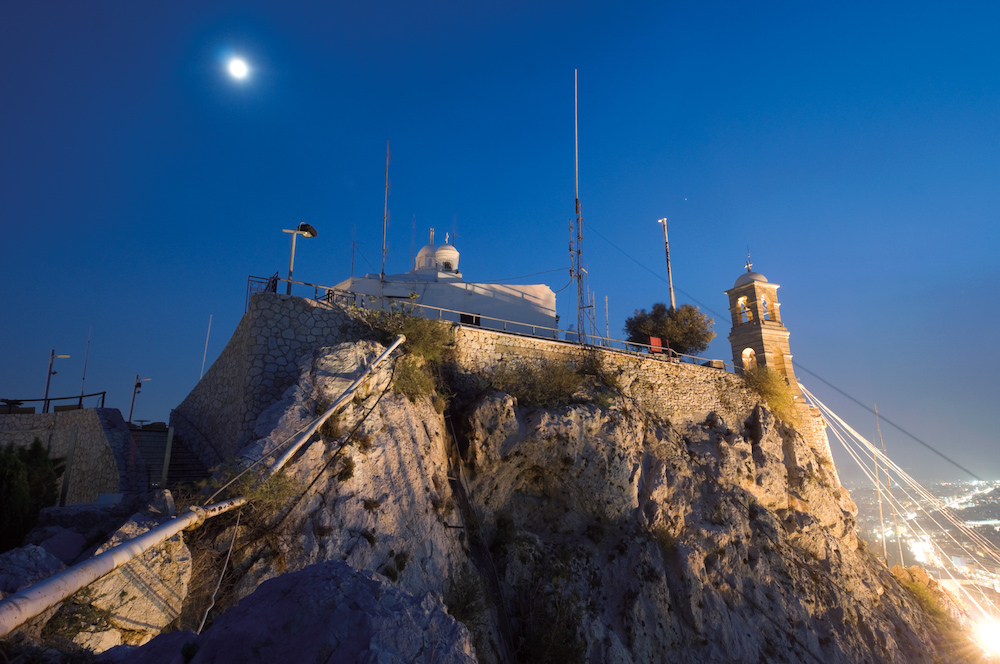 Athens is a large city and a climb to its highest hill, Lycabettus, is essential to put the place into perspective. The best time to visit is at sunset when the gentle breeze cools the air, the sky turns orange, red and violet, and the Acropolis is bathed in light. The 277-metre hill can be reached on foot. But if you are lazy – just take the funicular from the Kolonaki area.

Truman Capote prided himself for skipping altogether the Acropolis during his stay in Athens. Don't repeat his mistake. The hill with the finest temples and sculptures of the Classical Antiquity looks too familiar to hold any surprises. 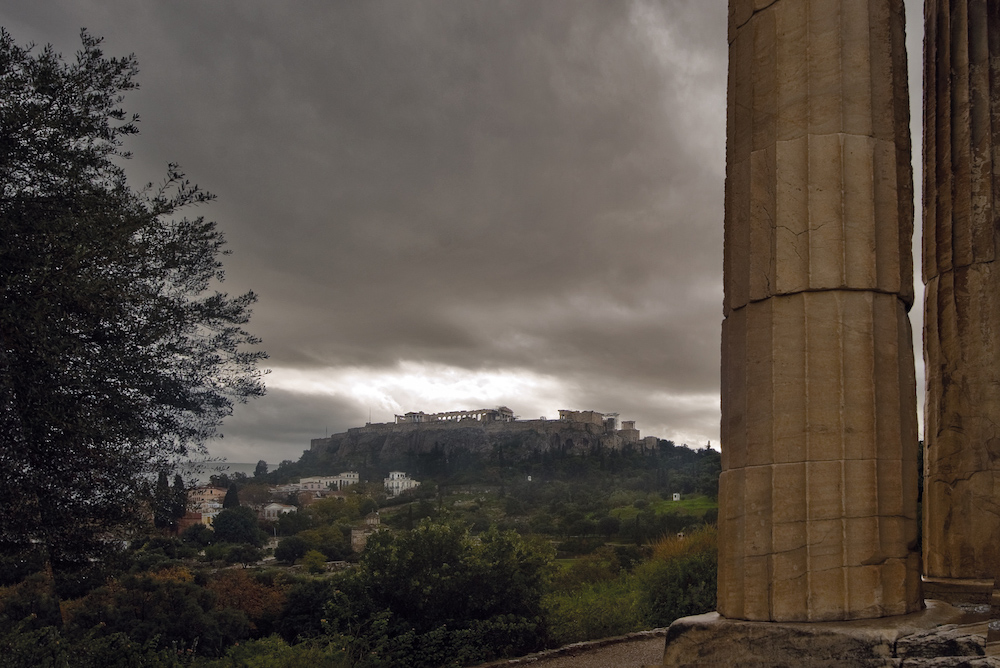 The Acropolis seen from the Temple of Hephaestus

It does change, however. Clouds, rain, sunrise, sunset, spring, summer – every change in the season, the daytime and the weather is mirrored by the marble columns, reliefs and sculptures. The site itself changes. At the moment, for example, extensive restorations aim to bring back as much as possible of its 5th Century BC look.

A visit to the nearby Acropolis Museum is a must, to marvel its modern architecture and its collection of Archaic and Classical sculpture, including about a half of the surviving Parthenon decoration.

THE TEMPLE OF HEPHAESTUS

It's easily one of the overlooked of the Athenian archaeological treasures, but that is a pity. Known also as a shrine of Theseus, this temple is the main sight in the ancient Athenian agora, to the northwest of the Acropolis. It was built several years before the Parthenon, but as it served as a church from the 7th Century to 1834, it is in a much better condition, with its roof still intact. This makes the temple a rarity, a place where you can peek inside a 2,500-year old building and be all on your own, if you come in low season.

If you want hustle and bustle, piles of souvenirs, several relatively cheap places to eat plus a bunch of extraordinary ancient monuments, head for Monastiraki. 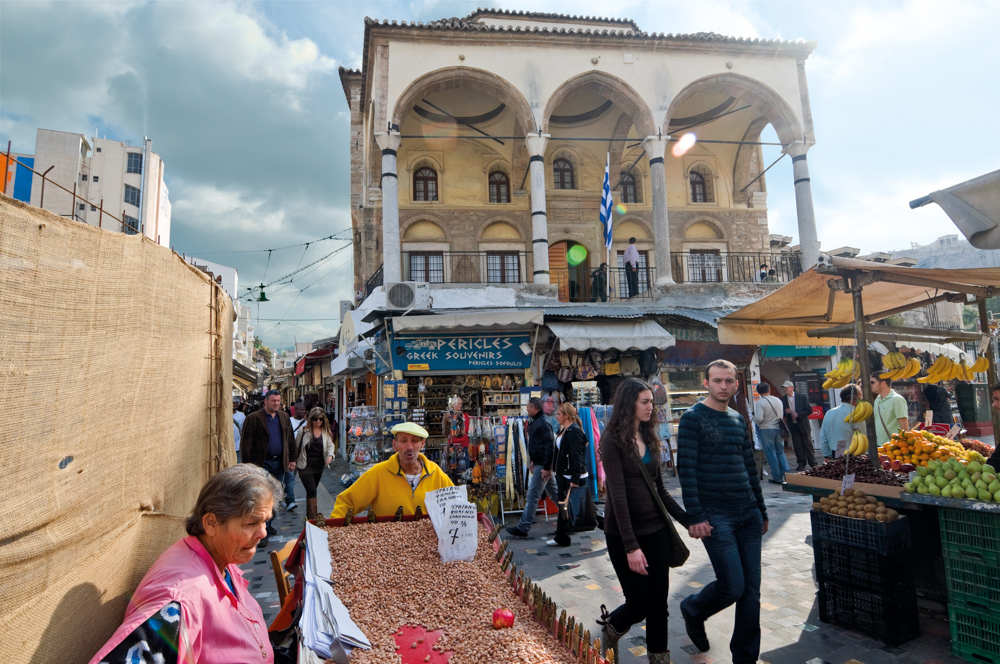 Named after a now-disappeared monastery, this part of Athens is now completely devoted to tourism. It's pleasant, though, with the chat of the shopkeepers, the penetrating voices of the restaurant touts, the music from still-surviving CD-shops and the surreal quiet of neglected and nearly abandoned houses and streets outside gentrified areas. Don't miss the regular flea market which in early mornings takes over Platia Avyssinias and the surrounding streets.

CAPE SOUNIO AND THE TEMPLE OF POSEIDON

An extra day in Athens is best used for a trip to Cape Sounio, about 70 km east. The famous sunsets, the quiet beauty of the 5th Century temple and the signature of Byron on one of the columns are reasons enough for a visit. 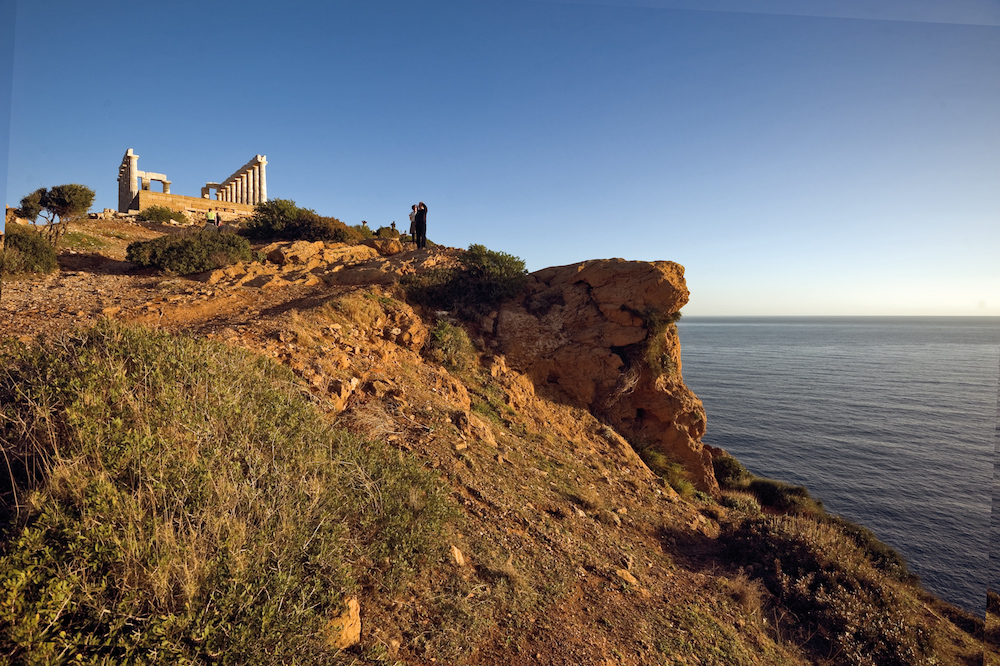 There are more, though. According to the legend, Theseus father jumped to his death to the sea below, when he mistakenly decided that his son was devoured by the Minotaur in Crete. The lively colony of grouse brings an unexpected vivacity to the magnificent temple, and the Akroyialli tavern in the nearby bay is a good, although expensive, place for dinner.

Few cities can compare with Athens in terms of "graveyard tourism" – in it, you can stroll around in an ancient cemetery and in a still functioning one, packed with famous names. 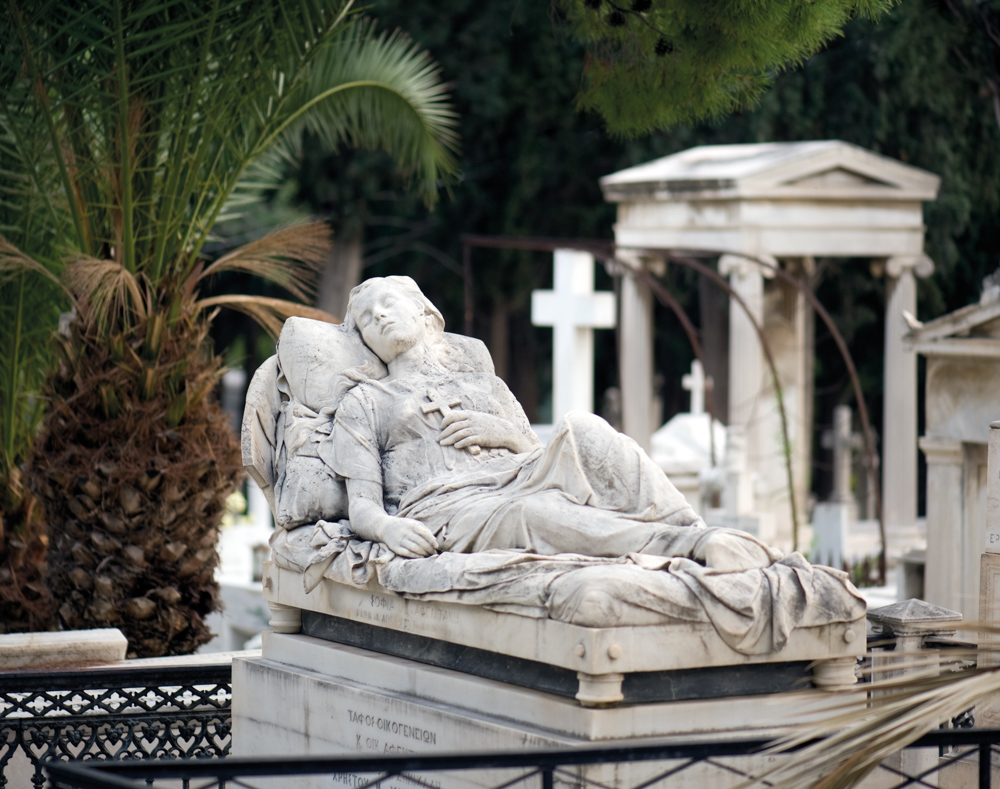 The Kerameikos necropolis close to the famous Dipylon Gates was the main graveyard of ancient Athens in the Archaic and Classical ages. Generations of Athenians, both rich and poor, were interred or cremated here, their big and small tombstones filling every spare square metre. The necropolis is now an archaeological monument, a serene place where tortoises roam around replicas of ancient tombstones. The originals are in the adjacent museum, a small and saddening place, especially when you read the touching epitaphs dedicated from long dead people to their loved.

Established in 1837, the First Cemetery of Athens is still used by those who can afford it. Its most visited part is by the main gate, where many important names are to be seen, including the 19th Century revolutionary Theodoros Kolokotronis; actress and singer Melina Mercouri and her husband Jules Dassin; Nobel Prize winners Odysseas Elytis and Giorgos Seferis; politician Andreas Papandreou; and archaeologist-cum-adventurer Heinrich Schliemann.

Tired of other tourists? Go at the central market. Situated along Athinas Street, close to Platia Kotzia and the Town Hall, it is where people meet to sell and buy fresh fish and fresh herbs; vegetables, fruit, nuts and meat; cheap clothes and shoes; and home essentials like brooms, pots or incense burners and icons. 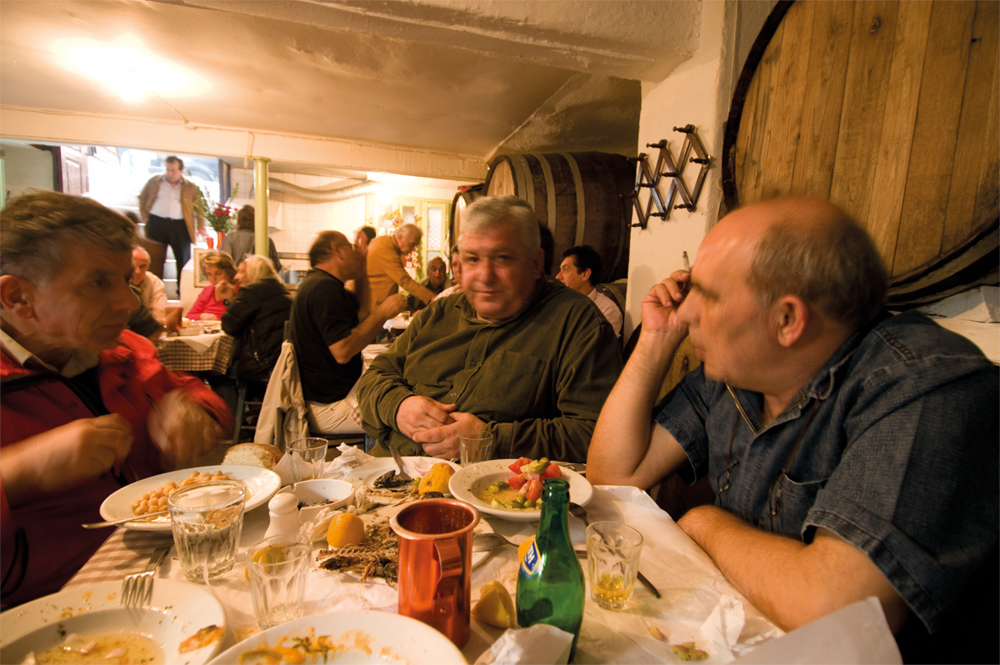 Diporto is a cult classic

The market is also one of the best places in Athens to sate your hunger. Any tavern around is a hit, but nothing beats Diporto on Socrates Street. Small, stinky and congested with eating, drinking and singing porters, shop-keepers, students and intellectuals, the tavern is owned by sturdy Mr Demetrios. For decades now, he is famous for his delicious food and for his habit to order your lunch for you.