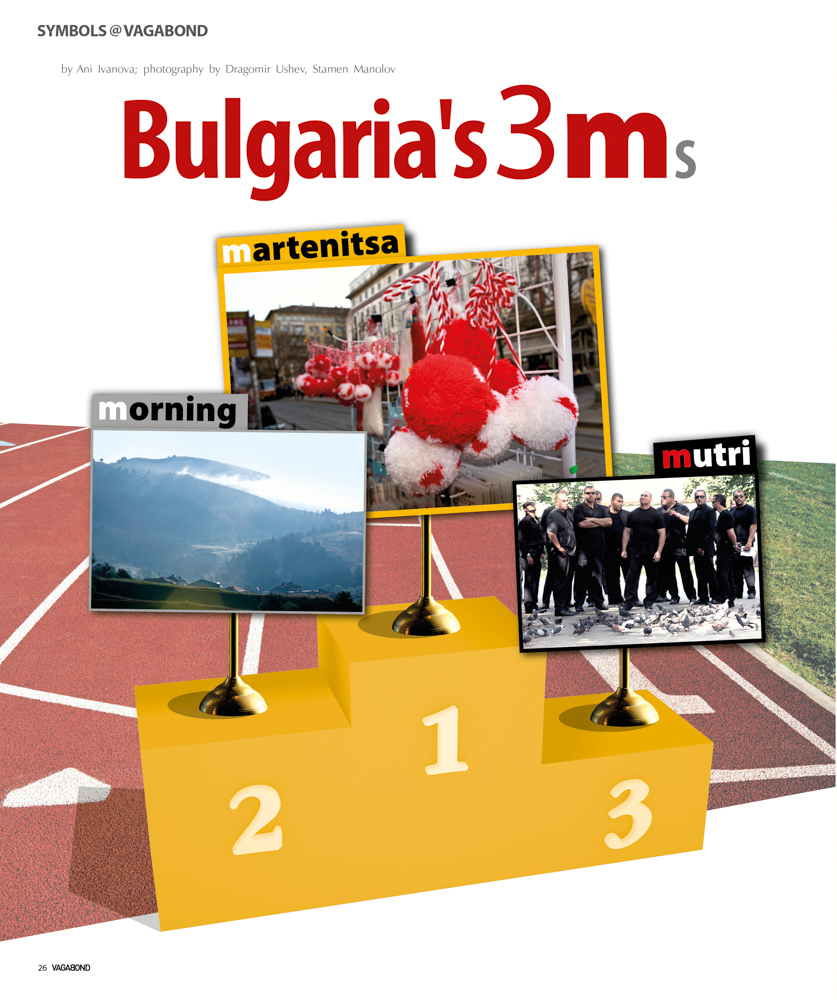 Next 1 March, when you tie a martenitsa, or a red-and-white braided yarn, on your wrist, you'll be wearing much more than the remnant of an ancient tradition. The martenitsa not only protects you from the evil eye and announces the coming of spring, it also symbolises Bulgaria itself – according to Vagabond's readers.

The martenitsa won the first ever Symbols of Bulgaria @ Vagabond campaign. A misty morning in the Rhodope came in second, and Bulgaria's ubiquitous mutri took third.

The campaign began on 18 July, inspired by the Symbols of Bulgaria initiative organised by the Bulgarian Association for Business and Tourist Information, or BABTI, under the auspices of President Georgi Parvanov. That campaign lasted over a year; the state and the government mobilised many resources, including private sponsorship, to propagate it; and after what appeared to be a fierce competition between the Bulgarian Rose, Tsarevets and the Bulgarian kebapche, the Madara Horseman was elected as Bulgaria's ultimate emblem.

Since only Bulgarians were eligible to vote, Vagabond, Bulgaria's English monthly, decided to ask foreigners living or having an interest in Bulgaria what in their view best epitomised it.

Between 15 June and 15 July Vagabond's readers sent in their suggestions. The 10 most popular entries made the shortlist: the martenitsa; a misty Rhodope morning; mutri; sexy girls wearing clothes that leave nothing to do imagination; cigarette smoke in the inescapable combination with homemade rakiya; SUVs sharing the road with donkey carts; Sofia's cosmopolitan centre with its churches, mosque and synagogue all within less than a square mile of each other; stray dogs; over-construction on the Black Sea coast and elsewhere; and the phrase ey sega, or in just a minute (or from the moment of speaking till eternity). The campaign was officially launched at a news conference on 21 July that prompted wide interest among the media and the public. The Symbols of Bulgaria @ Vagabond campaign made headlines in all the national media outlets and beyond – Austrian news portal Die Presse and several high-profile international blogs also covered the story.

When the e-polls closed on 18 October, 1,229 readers had voted for their favourite symbols of Bulgaria at the magazine's website, www.vagabond.bg. Nearly half of the voters preferred the martenitsa or the misty morning in the Rhodope. The mutri came third, emerging a breast ahead of the... breasts of the sexy girls. Stray dogs brought up the rear, earning the fewest votes.

The martenitsa, the Rhodope morning and mutri took the lead almost as soon as polls opened and were running neck-and-neck for first place until the very end. The margin between the two varied between two and 15 votes, usually in favour of the martenitsa. The campaign got off to a lively start – 640 votes were cast within the first 24 hours after its launch. The magazine's site received 2,510 unique hits during this period.

Twenty-four percent of voters were foreigners living in Bulgaria or interested in the country, and the rest were Bulgarians living in the country or abroad. Votes rolled in not only from all over Bulgaria, but also from neighbouring Macedonia, Serbia, Romania, Greece and Turkey. The majority of votes came from Europe, followed by the United States and Canada.

In each of the four groups of voters – expats living in Bulgaria, foreigners outside Bulgaria, Bulgarians in Bulgaria and Bulgarians abroad – the rankings broke down differently.

Expats gave the top three spots to the martenitsa, the Rhodope morning and mutri. Apparently this group is immune to the charms of sexy Bulgarian babes, since they awarded fourth prize to drinking homemade rakiya in a haze of cigarette smoke. Fifth place went to the peacefully coexisting jeeps and donkey carts.

The scantily clad ladies managed to win sixth place, placing ahead of the phrase ey sega, overconstruction and stray dogs, which all earned an equal number of votes. Multiculturalism apparently doesn't move expats – central Sofia with its churches, mosque and synagogue came in dead last.

Foreigners outside Bulgaria had slightly different pet symbols, as their top four show: the martenitsa, the Rhodope morning, mutri and sexy girls. However, they awarded the fifth place to ey sega, followed by rakiya and cigarette smoke, central Sofia, jeeps and donkey carts, over-construction, and stray dogs.

How much did articles in the Western press about organised crime in Bulgaria affect the voting? Not particularly – activity on the website didn't heat up after recent articles in The New York Times and the International Herald Tribune about the Bulgarian mafia.

Of course, Bulgarian participants viewed their country somewhat differently than expats. Those living in Bulgaria awarded first place to the Rhodope morning and second to the martenitsa; otherwise, their rankings matched the final outcome.

The Symbols of Bulgaria @ Vagabond campaign provoked heated and widely varying opinions, Vagabond's readers rank martenitsa, mornings and mutri as Bulgaria's ultimate emblems ranging from snarky comments on Internet forums – "if you foreigners don't like us, go home" – to opinions from expats themselves on a special forum on www.vagabond.bg.

"What I find offensive," one participant wrote, "is that the mutri are walking the streets in Bulgaria instead of being sent to jail and that no one seems to be doing anything about the feral dogs."

In the end, the defenders of Bulgaria's national pride can sleep soundly. Vagabond's readers may have given the country's mutri third place, but at least the martenitsa and Rhodope morning beat them – something the Interior Ministry and, yes, DANS obviously cannot do.