To start off with, buying a new car was next to impossible because supply could never catch up with demand. Therefore, people had to put their name on a list against a downpayment and then start coughing up instalments in the course of 10-15 years, and then get the car rolled off the planned economy production line. Curiously, families had to start paying instalments for a car for heir kids when they were in the early grades, in the hope the car would be ready when they graduated.

Owing to the extortionate import duties (up to 200 percent) driving a Western car was only within the reach of the BKP elite or of the select few who worked abroad and got paid in hard currency. The rest had to limit their choice to the Soviet Zaporozhetses, Zhigulis, Moskviches, Ladas and Volgas, the East German Trabants and Wartburgs, the Czechoslovak Skodas, the Romanian Dacias and the Polish Fiats. In 1966-1970 Bulgaria did manufacture, or rather assemble, cars – the so-called Bulgar Renault 8 and 10 as well as the Renault Alpine – on a Renault license. From the 1960s, Moskvich 408s were assembled in Bulgaria as well. For a short period and in limited numbers, Fiat 124s and Fiat 850s were also assembled.

Though everyone in Communist Bulgaria was supposed to be equal to everyone else, cars became a social status sym§bol. The tuk-tukking Trabis were the butt of jokes while the BKP elite moved about in luxury Chaykas, "inspired" by the US Packard.

Maintaining a car was a serious commitment. Generations of Bulgarian men spent their days off ritually washing the car and lying under it trying to fix things for many hours. Spare parts were a rarity. The 1980s downturn brought about the flourishing of theft of windshield wipers. Thanks to a shortage of local garages, car owners produced makeshift garages for themselves or "dressed up" their cars in handmade tarpaulin covers.

Following the democratic changes the Bulgarians were quick to swap the tedious Moskviches, Ladas and Zaporozhetses with 15-20-year-old Western Renaults, Opels and Volkswagens. At present, spotting a Communist-era car on the roads is an increasing rarity. Such vehicles usually belong to dedicated owners who are still willing to spend time and money on their maintenance.

Russian ZIL lorries (ZIL is the acronym for "Plant Named I. A. Likhachev," after a Soviet state functionary who directed early car and truck manufacturing). Those were perhaps the most widespread lorries in Communist Bulgaria. They continue to be in use, mainly outside Sofia

The Volga logo. The Volgas were manufactured in a factory called GAZ (an acronym for "Gorky Automobile Plant"). The plant also manufactured the luxurious Chaykas as well as lorries

A Moskvich 2140. The model, manufactured from the 1970s, was notorious for its poor workmanship. Bulgarians joked that the AZLK abbreviation meant "Oh, why did I buy you?"

A tuned Zaporozhets. Manufactured in Ukraine in 1960-1994, the Zaporozhetses were low-cost, small-engine cars

A Trabant as an inspiration: a sculpture called Trabant by Georgi Donov, situated at the back of the National Art Gallery in Sofia 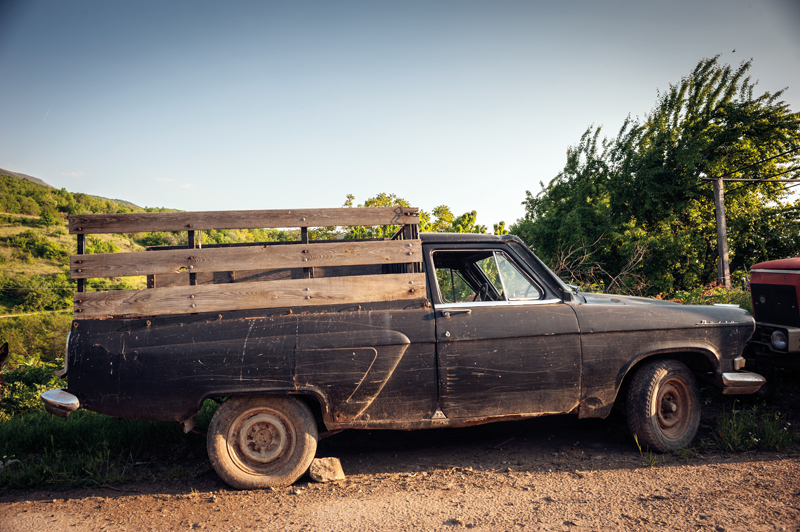 A tuned Volga GAZ-21, in production in 1956-1970. It was considered luxury and was inspired by US model of the time though it had a higher suspension

An IZh Sport bike with a sidecar. The plant which manufactured it, the IzhMASh, also specialised in weapons, including the notorious Kalashnikov submachine gun 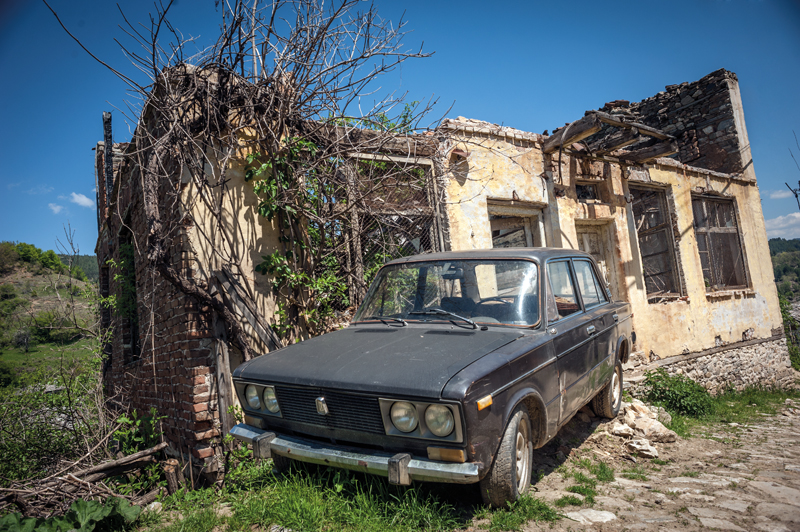 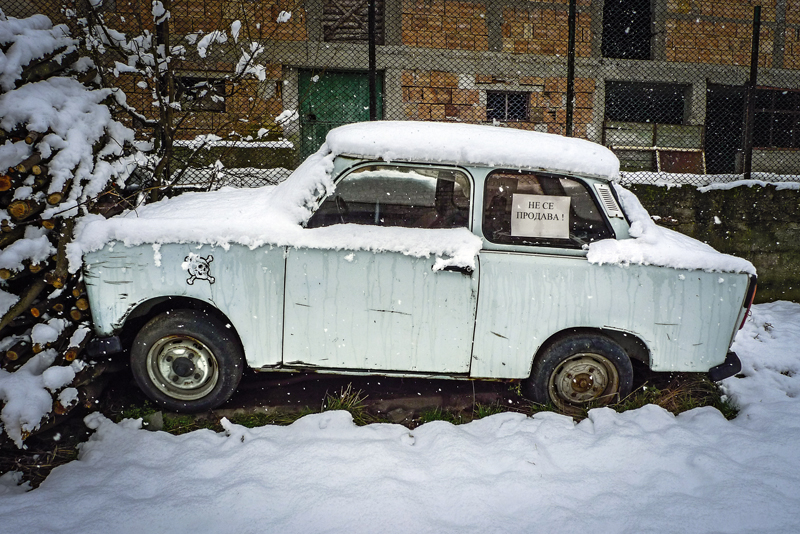 "This Trabant Is Not for Sale": the fate of many of the cars of Communism is to stay parked forever, with flat tyres and in backyards or side streets 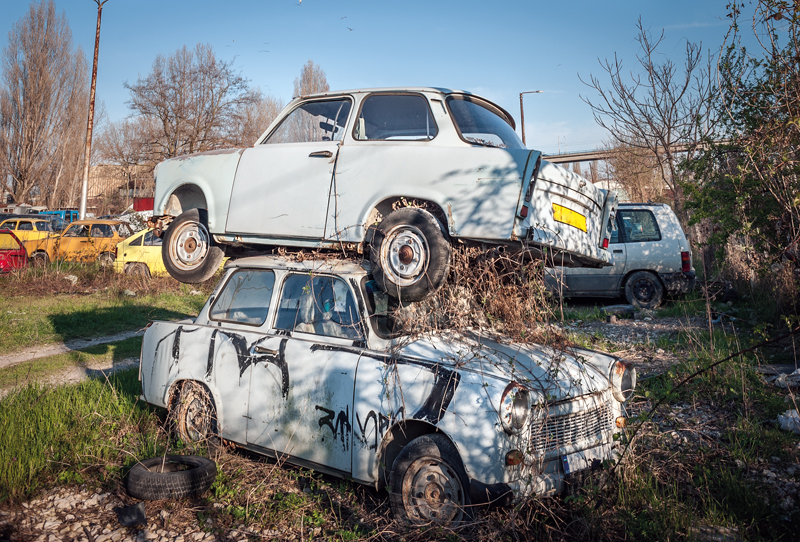 A Trabant over a Trabant. Trabis were the butt of jokes during Communism for their cheap construction and low power 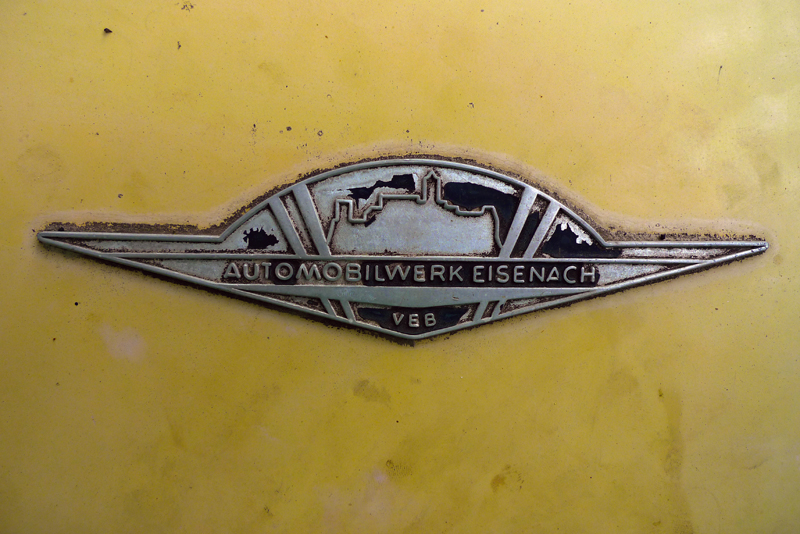 The logo of a Wartburg, manufactured by the East German  Automobilwerk Eisenach 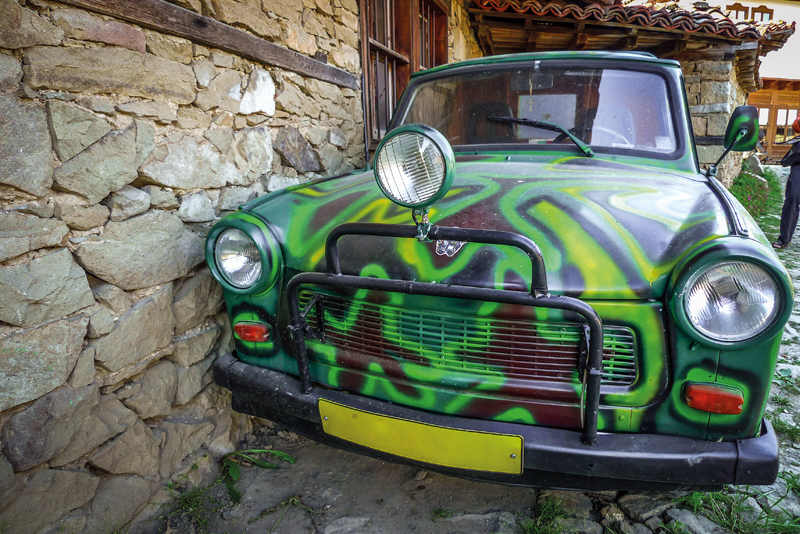