Representing Bulgaria at the Venice Biennale of contemporary art, Ivan Moudov has plenty of tricks up his sleeve - and is a genuine Vagabond

Ivan Moudov, a young contemporary artist, looks like a man capable of smoking his wife's cigarettes after painstakingly cutting the filter tip off each of them - in secret. Not because she would mind, but because he made a bet that he wouldn't smoke for six years, and still has five to go.

Ivan Moudov may appear to be a man like that, but he would never do such a thing. He's not one to cheat on his bets and he never tells on any secret. This is why one of the three artists representing Bulgaria in its debut appearance at the Venice Biennale of Contemporary Art refuses to disclose which work he will be displaying in the Bulgarian pavilion. He has promised to disclose this at a press conference later this month. "I'm exhibiting two projects. I've been working on the first for four years and the second is 'spanking new' for the biennale," is all that you can glean from him for the time being.

Moudov's art is as surprising as the man is himself, and nothing is what it seems to be at first glance. So, get ready for some shocks. Like the Socialist-period mannequin of a small girl which Moudov displayed as part of the "In Search of the Lost Time" exhibition at the Sofia Art Gallery in March. The girl was pregnant, causing an even greater shock than his previous project, New Hope, when Moudov installed a lift in the Goethe Institute. The only moving part of the lift was the floor, giving visitors to the Institute the sensation that they could be crushed at any moment.

But Moudov, known as Ivo to his friends, will have to work hard to surpass the success of his MUZIS (the Bulgarian abbreviation of Museum of Contemporary Art) performance. On 26 April 2005, hundreds of people gathered in Sofia's Poduene Railway Station. They had fallen for Moudov's extensive media campaign of posters, billboards and press releases that renowned Bulgarian artist Christo would be opening Bulgaria's first museum of contemporary art. There was no museum. There still isn't. The performance, however, brought this problem to light. "I noticed that there are now more talks about the lack of a museum. This is a kind of progress. I am not naive and I never thought that a museum would spring up after my stunt," Moudov says.

This performance brought him the 2006 Young European Artist Trieste Contemporanea Award. But because this is Moudov (remember surprises are everywhere!), the news was met with scepticism. "It really can't compare to the Hugo Boss Prize, for example, and the press made a big deal out of it. The press release came directly from Italy and I didn't initiate anything. The best thing is that the prize is a solo exhibition and a catalogue. This is just great!"

Moudov gladly gives us his first catalogue. Its cover displays Audio Guide, his joint performance with Sibin Vasilev. Visitors to the Sofia Art Gallery received a pair of headphones playing an audio guide to major works of contemporary art. The hall did not exhibit a single work of art, though - save for labels bearing the names of the paintings and the artists.

Some critics slated the "exhibition", as they had the pregnant mannequin, and criticised Moudov's work as lacking in ideas. "The reactions in Bulgaria are such because the audience is provincial and some journalists are unfamiliar with the history of contemporary art and report on such events unprofessionally." 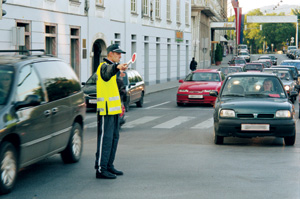 Isn't this the reason why Moudov is compared to Damien Hirst? "I'm flattered, but I'm not as good as Hirst," the Bulgarian says. Indeed, the reaction to his art in Bulgaria is much more controversial than in Europe. When Moudov staged his Traffic Control in Graz in 2001, everything went smoothly. He stood in the centre of a crossroads dressed in a Bulgarian traffic cop's uniform and directed the traffic until the real cops drove up, after about quarter of an hour. "I was interested in the Austrians' reactions. Being a disciplined nation, they followed the orders of a man in a uniform even though that uniform was unfamiliar to them." How would the Bulgarian police have reacted? "I guess they would have beaten me, and the man who lent me the uniform would have been in some trouble."

Making contemporary art in Bulgaria is a different matter from making contemporary art in the West. "Everything takes a lot more effort here - the funding, the presentation, the organisation. I had everything arranged for the performance in Graz, there was even a lawyer standing by on the pavement all the time. If I had decided to stage it here, I would have had to do it like a cowboy."

However, the situation in Bulgaria has changed over the past few years. "There is a growing interest in this type of art because there are interesting things being done in this area. The vacuum is gradually disappearing." Collectors and even patrons have emerged (Moudov won't give any names), but there is not a clear artistic movement among Bulgarian artists yet. "Those of us who work and exhibit together are linked only by our desire to be accomplished artists."

"I myself can't say exactly what a man of art is," he admits later. Born into a family of artists, he "never had a different option". In Bulgaria, where traditions in art are something that exist only in literature from the age of Communism, ancestry was regarded exclusively as vrazkarstvo, having the right connections. The only exceptions were perhaps the Molerovs, a Revival Period family of icon painters, and Holbein the Elder and the Younger. "I learned long ago not to pay attention to accusations of being a vrazkar. It has its advantages too: few people have had such chances of succession and continuity as me."

Moudov is a modern artist with an academic education. After an applied arts school, he went to the National Academy of Arts, initially because he simply wanted "to paint". Those were happy days for Moudov, and contemporary art was still an unknown concept in Bulgaria.

Things changed when he was a second grade student. He realised that "nothing was gonna come out of this academy thing". "I learned useful things, like composition and colour matching. But they weren't what I needed. All the information and knowledge I've got has been acquired outside the academy." Academic education has also given him something important: "Education gave me the self-confidence to really be an artist."

Have you had enough surprises? Because we are not through with them yet. After all, we are dealing here with an artist whose most grandiose project is the theft of parts of installations and works of art by well-known artists. Moudov exhibited all the souvenirs that he took from works by Jeff Koons, Pipilotti Rist, Paul McCarthy, Thomas Shutte and dozens of others for the first time in 2002. His project, entitled Fragments and kept in suitcases, continued expanding and became a mini museum of contemporary art. (He always chooses objects which can be easily replaced and will not damage the original.) So far Moudov has exhibited three suitcases. "I have items for two more. I have collected about 200 objects." He has stolen from modern Bulgarian artists too. "Nedko Solakov and Chavdar Boyadzhiev are not angry with me and though they haven't mentioned it, I'm certain they are pleased to be part of Fragments." 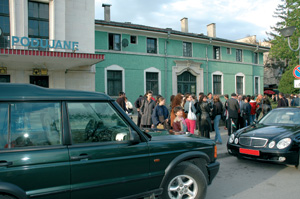 This leads to an important question. Is Bulgarian art provincial? "It's rather the audience that is provincial," Moudov answers instantaneously. He is the kind of person who appears reticent at the start of a conversation, but then relaxes and begins joking. "No, I wasn't serious. There are both provincial and not so provincial artists in Bulgaria. It's just that we live on the periphery and this affects us more or less. But if an artist is good, it doesn't matter where he's from. Things and processes are the same everywhere. Besides, artists don't stay in one place; they are constantly on the go, travelling."

Moudov himself is "constantly on the go". He spends a third of the year outside Bulgaria, mostly visiting modern art galleries. He still hasn't seen everything he wants to see in Europe and there are still unexplored territories like the United States and Asia. He doesn't go in for an immigrant's life, though. "I'm Bulgarian. I don't care whether I live in Paris or Sofia, what matters for me is the journey itself."

Here, things take a turn again. "But at the beginning of my career I wanted to come up trumps abroad. Perhaps I shouldn't say that I didn't want to work in Bulgaria." "Why not?" "It's not very patriotic." 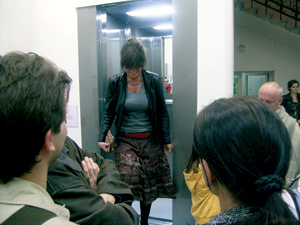 Patriotism was something artists had rammed down their throats under Communism. What does young contemporary artist Moudov think of art from that period? "It's interesting today to see their pictures and think, 'It was one hell of a time.' But if you were an artist back then, it must have been pretty depressing to have a few subjects that you had to stretch all the time and have limited freedom of personal choice."

He believes that history must not be forgotten lest it be repeated. "Most large Communist sculptures were dismantled and melted at the beginning of the democratic changes. This shouldn't have happened, they are historical evidence. If we demolish them, we lose our past. They are a document of the times, which has to remain and remind us of them. We can't wipe out everything and start from scratch, because we screw ourselves up in this way."

To what extent is his present assessment the result of some personal nostalgia? 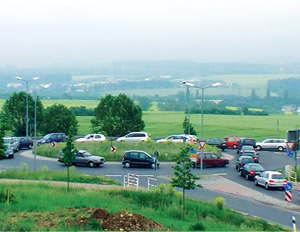 "I associate these years with my childhood and it's something I'd miss even if I hadn't lived in Commietimes." Now, here is something that's not surprising. Moudov, who has just entered his 30s, is the youngest of the three Bulgarians who will be representing the country at the Venice Biennale. The other two artists are Pravdolyub Ivanov and Stefan Nikolaev.

And how did Moudov manage to worm his way into the favour of Vesela Nozharova, the curator of the Bulgarian exhibition? "With the right connections, of course!"