Kodi Scheer teaches English Literature at the University of Michigan, where she received the 2008 Prize in Creative Writing for her outstanding MFA thesis.

Her stories have appeared in Bellevue Literary Review and Quarterly West. Currently, she is completing a collection of short fiction tentatively titled Gross Anatomy. 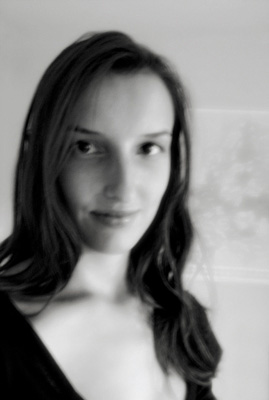 Two hours before the competition, we find a pink shoebox of scorched hair in the hotel lobby. That cunt Miss Venezuela stole somebody's blond extensions – real human hair – and lit them on fire. The hair smells like skin after you twist a cigarette in it. We check our rooms to see if anything's missing. This year, the competition is particularly fierce.

Miss USA and her coaches do not have enough time to get new extensions that match. Her roommate, Miss Germany, offers to cut her own locks. She's such a martyr, even though she's the perfect Aryan specimen, with a golden lion's mane and sleeping pill-blue eyes. Maybe she feels guilty. Miss Israel reminds Miss USA that it's not the end of the world.

"How would you know?" asks Miss Palestine, who can't officially compete but hopes to tapdance in the opening number.

"Really, is not so bad," says Miss Afghanistan. "Is only little hair."

We stare at Miss Afghanistan. She's the odds-on favorite, only because she survived some crazy bombing. A long wormy scar the color of strawberry jam snakes down her leg. Normally, she'd have to cover it up with heavy makeup, the special kind that doesn't rub off on your clothes, but the judges claim it shows character. The scar is its own anti-violence charity. She doesn't have to say much in the interviews.

"It's not real," says her roommate, Miss Zimbabwe, "the scar isn't real."

"What?" we say. "That's impossible." Then we rub our fingers across the scar and get bright pink goo stuck in our nails.

"Fake!" we scream. "Miss Afghan blanket is a stupid liar fake! What else on you is fake, princess?"

"No-thing," Miss Afghanistan stammers in her practiced little accent. She backs away from us. We make a circle around her. As we hold her down, we take off her robe. The swimsuit peels away like wrapping paper. What's inside? Her breasts aren't real either, hard and lumpy. They hardly move. Miss Afghanistan is struggling so we pin her down with our knees. She needs to learn her fakeness is not acceptable. We'll teach her a lesson. We examine the toes on her right foot, one-two-three-four-five little piggies. Miss Japan has a sharp nail file that saws right through the skin of the big toe, we keep hacking until the toe comes off. Miss Afghanistan howls. Now she has a real disability – she won't be able to balance as she walks down the runway. We picture her tottering like an infant and falling on her made-up face. Nobody likes a gimp beauty queen, especially the judges.

Real blood isn't that bright red. It's fake too. We pick the bone out of the toe and test it, knocking it against the wall. Hard as a rock from Tiffany's. Real bone isn't that durable. Her whole body is fake, one big artificial lump molded into breasts and hips and cheekbones.

We peel back the skin on her foot. Too soft and stretchy to be real. And her skin is orangey bronze. It comes off easily, too easily, and reveals her blood and tendons and bone. When we get to her hips and torso, we find little pockets of yellow fat. There's lots of it around her liver, all of her organs. We've seen liposuction done on TV. The fat wasn't so yellow.

The skin on the rest of her body, including her face, comes away in our fingernails. We put it in a pile next to her so the maid can clean it up. Her scalp is more difficult. The glossy black hair sticks to it. We forgot all about her body hair and we search the pile of skin for her eyelashes and eyebrows. Everything else was shaved or waxed clean. We pluck out the eyelashes. Too dark and curly. What's left is muscle and bone and internal organs. Her muscle looks like raw beef. It's red and sinewy. Such an elaborate fake. The bone is too hard. Her organs, squishy and warm, melt in our hands. To think we might've lost to this poser. We have to draw the line somewhere.

It's an hour before the competition. We toss her insides on the floor so we can wash our hands clean. Miss Afghanistan has made a mess. Housekeeping, please. The blood comes out of our manicures with a little scrubbing. We hum the opening numbers we scrub, and tap our feet to the rhythm. Before we know it, it's showtime.