At the age of four Lana Santoni attended a Polish-American wedding and has since been intrigued by most things Slavic. A former editor of the literary journal Sou’wester, she has been awarded an Illinois Arts Council Fellowship in Prose. She tries to spend several months a year in Prague.

Each night Phoebe and Edwin slept like this, in the reverse of the usual coupling of spoons in the marital drawer. Phoebe would try to summon sleep by pressing tight against Edwin's back, then calling forth that waking dream which had long gently tricked her into unconsciousness, a fantasy in which, most often, she would be huddled in a cave or sometimes the corner of an abandoned boxcar, cradling an infant that was only hours old. 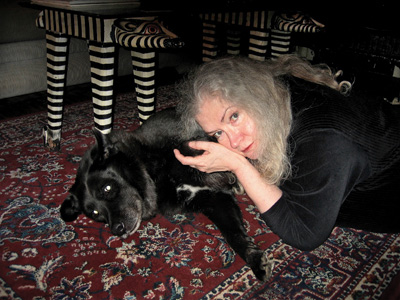 Sometimes it was her child, sometimes it had been entrusted to her by her Girl Scout leader, Mrs Fox. Once it had arrived on a ruota, the medieval Italian wheel where, in the depth of the night, foundlings were placed through an iron grille into a wooden box and spun behind a convent's walls.

Above Phoebe and the baby would stand a vigilant protector, whatever man – uncle, teacher, celebrity – currently commanded her sexual imagination. In adolescence it had often been the Harpo Marx of the later movies who shadowed her, old, his wig slipping, smoothing the quilt over Phoebe, rocking their invisible infant in his liverspotted arms.

Phoebe scanned the room. Anyone, she thought, except Lech Walesa. When he first arrived at her bedside she had loved to hear him speak the only English words he ever said – "Union Yes!" in an accent so thick and a voice so hoarse it sounded like he was hatching a Polish eaglet from his throat.

But with Lech came too many infants in pink or blue blankets all over the bed and on top of Edwin's Art Deco dresser and chest of drawers. One would awaken just as Phoebe was cradling another to sleep. Lech wasn't much help – he straddled a chair in the corner of the room, orating into a mirror. He left no doubt, though, that all the newborns were his. And someone had hung a paint-by-numbers Wojtyla in a coordinating Deco frame above the headboard.

Phoebe, drifting off, was startled by a foreign voice. "On the night of my arrest I had procured an egg for Anna Akhmatova, which later I salted and ate before my departure." Osip Mandelstam, Edwin's hero, joined Lech's noisy brood just as Phoebe was beginning to realize that she might never supplant the flamboyant and eccentric wife of Edwin's youth. Osip seemed to know that Phoebe would never win the gentle Edwin. Truer lovers than they were had been broken apart. Fate had done them in. Opportunism. Acts of God. Stalin.

Mandelstam turned out to be a regular mother's helper, thoroughly absorbed in caring for all the tiny products of Lech Walesa's potency. Dailiness delighted him. He pinned a baby girl into a cloth diaper with one hand and with the other merrily pounded a second baby's back until she let out an enormous belch. Then he walked over to the radio. Edwin had spent his youth sprawled in front of it, hearing the scratchy voices of the world through its gold mesh. Osip liked to polish the cabinet's inlaid veneer and to finger the golden names of cities that shouted across the dial – LONDON PARIS BERLIN MOSCOW CAIRO NAIROBI JAKARTA TOKYO NEW YORK. He fiddled with the Bakelite knobs until he heard some imaginary music. He spun a baby around the room. Then he vanished.