FROM THE HOUSE OF CLOWNS

Galin Nikiforov was born in 1968 and studied at the Technical University of Plovdiv and the Economic University of Varna. He is married with one daughter and has worked as an engineer since 1993. He has published five novels, the first being The Last Truth in 1998.

Fairly Gently appeared in 2003 and won a special award in the Razvitie literature competition. Good Guy (2006) won the Sveltostrui award in 2008. In 2009 The Photographer: Obscura Reperta was published and Loser's Summer in 2010. Galin Nikiforov has twice been nominated for the Helikon award, twice for the VIK Novel of the Year and once for the Elias Canetti literature competition. 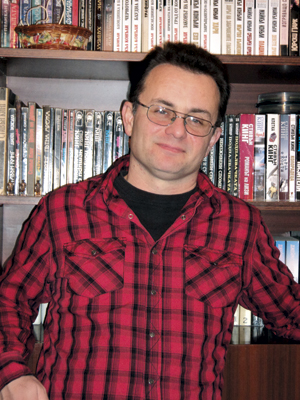 I was a strange child, one nobody ever called by name – to the Goddess I was simply "my boy", while the few other eccentrics life brought my way didn't feel the need to call me anything or to ask what my name was. I was free, truly free, I lived without rules, without guardians, without responsibilities in the little world of my own family. I've never gone to school, hence my rather unusual education and lack of a name. I've learned everything I know during endless nights spent in the Mahogany Castle's enormous library, filled with books in more than 30 languages. There, in the dreamy silence of the midnight darkness that only the candles' fragile flames nibbled at, I discovered the world's beauty – its past and its emotions, which had long since smouldered away but which would nevertheless rise up from the ashes every time I touched them, showing me their full charm and intransigence.

My thoughts take me back, winding like a spiral in time and catching two bright memories in their invisible silvery nets. The first is my brush with the wonder of the "Chloride Chameleons", whose colours in the Mahogany Castle's storehouse at night looked like visions from another universe: cesium chloride, which burned with a lightblue flame; rubidium chloride – a small explosion of raspberry sparks; and sodium chloride – golden-yellow diamonds smashed to pieces. And the second – that wonderful and inimitable verse by the melancholy Paul Еluard, written in towering gothic letters on the pearly whiteness of one of the walls in the Goddess's spacious studio:

And they pull the cord that binds us.

Yet they cannot break it."

That was her favourite poem, not only because of its beauty, but also because it had appeared in her life along with me. She had once told me how on the night she gave birth to me, she had heard someone whispering this verse in the darkness: as if an unearthly spirit had bent its head and murmured it to her to remember forever after. I often recall how she would dance past me in the lonely hours of late autumn afternoons – barefoot, eternally young, out of time's reach. Her eyes closed, she would recite the hopeless French poets who had touched her heart even as a child. On those autumn days when she took the canvas down off her easel – and that meant every late afternoon, as soon as the half-translucent shades in her studio grew blood red from the dying sun – she would sit in front of her triptych mirror, slowly colour her lips with pale blue lipstick, put on her golden kimono and sail through the whole house with light dance steps. She knew more about colours than any mere mortal, since she knew that while she danced, thanks to the blue tint, her lips seemed to hang in the air around her like the smile of the Cheshire Cat from Wonderland. Her arms were long and graceful and fluttered along her body with the beautiful smooth motion of falling leaves, while the frozen smile did not leave her face, as if drawn on a diorama. Sometimes, when I was still a child, she would take me in her arms and dance with me, while I, struck dumb, would merely press against her, breathing in her strange dry fragrance of jasmine mixed with the distant, sharp scent of turpentine, which had seeped into her silvery-white breast from her paints. She was a strange, unearthly woman, whom I always touched as if for the last time; there was something doomed about her and she knew it, thus she lived as if enchanted, in a world filled with magic, without wanting anything from anyone, simply delighting in her secluded life and her art. When I grew up and got too heavy for her delicate arms, the birdcage with the yellow-painted magpies from her studio became her "dance partner": she would embrace it like a Phantom Lover and whirl it endlessly through the hushed rooms of the huge house, while the two surrealistic birds behind the thin bars would almost inaudibly tap their beaks, as if in rhythm with her footsteps. In those lush autumn afternoons and violet evenings I would sit silently by her with a book in my lap or with a half-blank sheet of paper in the typewriter and I would watch her with inexplicable sadness, as if the beauty she filled the house with was not the most important thing, but rather the pain that someday I would lose her forever.

The Elizabeth Kostova Foundation and VAGABOND, Bulgaria's English Monthly, cooperate in order to enrich the English language with translations of contemporary Bulgarian writers. Every year we give you the chance to read the work of a dozen young and sometimes not-so-young Bulgarian writers that the EKF considers original, refreshing and valuable. Some of them have been translated in English for the first time. The EKF has decided to make the selection of authors' work and to ensure they get first-class English translation, and we at are only too happy to get them published in a quality magazine. Enjoy our fiction pages.