Alexandra Chaushova (Bulgaria) was born in 1985. She is a graduate of the English Language High School in Sofia. Between 2003 and 2008 her work appeared in the literary journal, Literaturen vestnik and in Altera magazine. 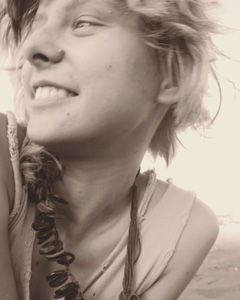 In 2003 she won a Soros and ProHelvetia contest for her debut collection Bzzz-z-z-z Poems and Dreams (Stigmati Editions, 2003), featuring her own illustrations.

He threaded the worms onto the hook, so that their bodies went over its length, then cast the line, taking care it wouldn't make much of a splash. He saw them hesitating in the water. Finally, the float wobbled; the thinner the rod's tip, the better you felt the fish pulling at the line. What a triumph when the body emerged from the water, flashing suddenly above the dull river. As ever, he wondered how the fish felt in that instant, what it saw, what it heard, and fish can hear with their skin...

He grasped the fish and took the hook carefully out. Sometimes it pierced its delicate eyes or lips. How painfully they strained while he was struggling with the barb. Yet he was hoping he did it fast and the fish didn't suffer much. He wished it didn't feel pain and apologised to each one, feeling like a dentist caretaking his patient, then he dropped it into his bag and listened with joy at how it wriggled inside, and then the other fish in there wriggled too.

He just took pleasure in sensing its twist, the feel of victory, the feel of a life grabbed in, the conversation with a fish, trying to comfort it, the feel of a strong hand, the feel of something tender being held. The contraction of feeble muscles, the pleasure of everything depending on him and yet having no complete freedom for wanting so much that it depended on him. Each killing boiled down to something useful is no longer a killing. It became a pleasure, a game that he played thirstily despite the obvious end, like a man and a woman in bed.

He gutted the fishes and pondered the treasures he scooped out. Sometimes he thought he could see through the gallbladder as though it were a window, it looked so much like a turbid green piece of glass.

Later on he realised the strange mechanism that had been at work. God would never waste his time punishing you. You have no choice whether to obey His ten commandments or not, they are inside you and, when you disobey, the feeling of remorse is your punishment. This is a natural mechanism, it was set in motion and now works without anyone having to look after it.

He crunched their heads even though they looked like faces; they were tasty, after all, with chips, tomatoes and onions in the summer. He mopped up the salad juice with a piece of bread. The taste of fish is different in winter. They only feed on seaweed in winter. Now they dissolved into him, ran through his veins as blood, nourished his organs, made his heart beat and turned into movement again, as eyesight, as hearing, as thoughts. In his thoughts he was trying to escape the remorse, the awareness of murder, but it lingered somewhere down inside him like an undercurrent.

A long time ago he had a dream of how he beat his mistress to within an inch of her life. He felt weak that this was all he could do, and this weakness made him even angrier. He finally realised that, as long as she was around, she would remind him of his guilt through her sheer existence, and he had to kill her if he were to kill his guilt.

Later on in his life he realised that guilt might not be such a bad kind of feeling after all, because one is never alone with guilt – one is always connected. When he admitted to himself he had murdered all those fish, he felt connected to them as if they were his family. A family that always was, and always will be. It was a bit like his father's explanation about how a pawn moves in chess – always across when capturing another piece, rather than sticking to the same path as before. After a murder one can never follow the same path.

His own path finally led him to an illness that made him bedridden. It felt like the ultimate betrayal, a letdown: wasn't God supposed to help him in an answer to his faith? God only existed because of this faith. As soon as he realised he would die the following Tuesday, he resigned himself to the fact, glanced at the table, at the bed, at his legs, with a feeling of alienation. The creature was to turn into substance but the certainty of this future made him feel at ease.

He was just lying and listening to the silence of objects.

When his grandma was dying, she started to see her dead mother and father. All the family were there, ready to take her. She was explaining the way she saw the dead ones, lying around on the carpet, sitting in her bed. She would try to nudge her mother to wake her up, and sometimes she spoke to her. He was pacing round the room, wondering whether he wasn't treading on all these dead people beneath his feet and yet he continued marching across rows of them. The relatives came to welcome the dying one, to introduce him to the new world as once they had welcomed the newborn baby to the world.

As he was lying there, fishes started entering the room. First, a small fry popped up from the hem of his quilt, then a few carp swam along, then in came the mackerels, the haddocks, the cods, the trouts, the bonitos, the salmons. A shoal of tiny bleaks flew in, several crustaceans also trudged along. He had killed them at a dam near his village. They lined up on the floor, into the glasses, over the curtain, under the cupboards…Waiting.

A whale overshadowed the window.

The Elizabeth Kostova Foundation and VAGABOND, Bulgaria's English Monthly, cooperate in order to enrich the English language with translations of contemporary Bulgarian writers. Through 2009 we will give you the chance to read the work of a dozen young and sometimes not–so–young Bulgarian writers that the EKF considers original, refreshing and valuable. Some of them will be translated in English for the first time. The EKF has decided to make the selection of authors' work and to ensure they get first–class English translation, and we at VAGABOND are only too happy to get them published in a quality magazine.

Read 26783 times Last modified on Tuesday, 29 July 2014 12:28
Published in Fiction
More in this category: « SAVE POOR BOB, IF YOU PLEASE AND THEN ORPHEUS DESCENDED INTO HELL »