SAVE POOR BOB, IF YOU PLEASE

Anna Kovatcheva (Bulgaria) was born in Sofia in 1990. She is now a student at the University of Virginia in the United States, studying Elements of Fiction. In her spare time, she writes poems, draws stick figures, and enjoys the color yellow.

This piece "Save Poor Bob, If You Please" won first prize at the Virginia High School League's Creative Writing Contest in Short Fiction. 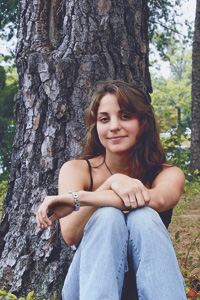 SAVE POOR BOB, IF YOU PLEASE


I went to the crossroads;
fell down on my knees

Sleeping through the Mojave desert. Roll of the radio, roll of a low, black car slipping down the highway through the dust, blue in nighttime and gold in day, burnt orange and raising shimmers up off the pavement, ripples from the concrete and heat.

Did Eisenhower want his highways empty? A man takes a camera, a shoebox of cassette tapes, and goes. Goes. Tom Waits on the radio, bleeds into Kansas by the time the bumper crosses the state line and stops, bone-dry-out-of-gas, stuck in the middle, in two places at once.

Every rusted-through by-the-hour motel has a story. Dozens of sordid affairs and goings on. Two brothers share a room in Alabama and get run out of town by an extremist with a shotgun and a Bible in the back of the pick-up, rain-soaked from where he left it out in a hurricane in October of '65.

Through the desert where you can run off the road and not notice. A highway that might as well not exist, and a wasteland even the hemp-braiders won't care to protect.

He picks up a hitchhiker in Arizona, thin and tall and blonde. She folds herself into the front seat with her knees hitting the dash and she blows smoke rings through the window, but they melt and they mutate by the time they're out, half-formed ovals and Cs out in the breeze.

I spent all my money, she tells him, and she touches her breast pocket, an old coat that was her grandfather's or an uncle's, something not hers. There's a lump just over her heart, a crinkle of cellophane muffled by cloth and the road under his wheels.

You can't tell, here, if you run into the dirt. It's flat enough that it won't matter, you won't even feel the bump. The sand blew into the streets and covered the pavement they put down in 1958, a trade route, they called it, an American silk road, and it died when there was no one to drive it anymore.

You could make a dollar a mile working as a trucker, more than most people could ever imagine flipping burgers for five-fifty an hour. The downside is the food, the travel plazas and rest stop showers in the middle of nowhere. Glancing up from your over-fried chicken to look into the eyes of the two children of a crazed supremacist father with the USMC tats and a gun under his pillow, a shrapnel scar splashed across his chest. They watch from the table with ketchup dripping from their fingers, eyes empty like murder. The downside is the people and all alone, being all alone, in the middle of nowhere, flat and long and forever.

The hitchhiker, she bitches about his music and talks about artists he's never even heard of, things he doesn't know. She talks about religion, he thinks, or something like that. Something about the Earth Mother and Gaia and she trails off then, the rest of her lost in a cough and a smoke cloud that fogs his rearview. He reaches to wipe it away and his hand drops, doesn't bother.

There's nothing to see. No one would care to chase them.

He stops at every motel. Goes to every office and gets a bored clerk's signature in a moleskin with a contract stapled to the cover, saying he can take all the pictures of their sign he wants and they won't sue.

Point and shoot. The Pink Shell Motel. El Rancho's Motor Lodge. He gets them all with a hundred-dollar digital, some piece of crap he got on sale back in '99.

She watches him replace the lens cap after the one off I-64, the one that hasn't even got a name, just burning red letters blazing M-O-T-E-L into the dust and blocking the stars.

The camera can steal your soul, she tells him, playing with the leather-looking strap around her wrist. She assures him it's fake, tells him that she's one of those people who'll rob the blood bank or the butcher and throw it all on the women in fur coats. She says she was in a production of Carrie in high school, modified by her drama class for the stage.

The air breaks halfway through the Colorado Plateau. She sweats, the fading henna up her arms and on her hands melting off her skin and staining her palms dirty. A child playing in the yard, remnants of mud pies with grass blade garnish, the taste grainy on her tongue.

It's three hundred miles before he asks. Where are you headed, he says, and the wheel is slipping under his wet palms. She shrugs her shoulders, both at a time, and she says, I dunno if it matters. Does it?

Not to me, he tells her, and she smiles and lights another smoke, and God, but he hates Menthols.

She pulls out the gun in New Mexico. Casual, one hand reaching into her purse as if for lipstick or mascara or her lighter, since the car's is busted and hasn't worked for a decade at least, even though she just lights each cigarette from the butt of the last, what she says is saving her time. She holds up the Colt almost like weighting a decision - gently in her hand. An antique, slim with a wooden grip and a rusty trigger, and the barrel is spotted with age.

Her thin fingers wrap around it loosely, caressing, cradling. She wonders. He sees it from the corner of his eye and he doesn't start, just shifts gears. You don't know how to use it, he says, but it's a guess, not a challenge. She shrugs and slips it back into her bag. It's like the camera, she answers: Point and shoot.

The interstate does not go in circles, not in spirals. But maybe if you drive just right and sometimes off the roads, you can leave a place and come back. You can make a dollar a mile working as a trucker, delivering, but you've gotta know the maps and you've gotta be able to tell the highways and the creases apart. Nobody pays for this, but nobody has to, and he's still been all over, everywhere, and there's a hundred pale lines like scars across the country and the earth and he's got his pictures so he can remember. So he knows, I was here. I was here.

Where are you going, he asks again, and she shrugs and tosses the rest of her cigarette out the window, wiping the ash from her hand onto her skirts. She watches the wind catch the paper and it zips past her window like a bumblebee on broken wings. She sighs. I'm thinking about quitting.

Why do you take those pictures, she asks him. Do you think it's important? Will it make a good coffee table book, do you think, old hotels, history? She tells him, It's just peeling paint and falling apart. It's just the American road-trip dream destroyed. They made it dusty neon on the highway. There's no polish anymore. No shine.

He shrugs and checks his watch. It's a tiny, round-faced thing that gets lost on his wrist. He wears it strapped too tight and the thick, dark hairs creep over the band, and under it his skin grows pink and damp when he doesn't loosen it for too long. The watch tells him, It's too late to keep going.

Next motel? the hitchhiker asks. It's the way people ask questions when they think they know everything and they've got it all figured out, but he shakes his head and his sunglasses slip from his crown and tumble into his lap. I only stay at the Holiday Inn, he tells her. Might be a while 'til we stop.

So, then, to begin at the beginning. Radio's down but the car keeps going, keeps moving. She closes her eyes and settles into the smoky leather seat, sharp knees jammed almost up to the windshield. She curls into herself and she dreams. She sleeps and he drives, Orphans through the speakers and the road stretched out as far as the headlights will go, flat and long and forever.


The Elizabeth Kostova Foundation and Vagabond, Bulgaria's English Monthly, cooperate in order to enrich the English language with translations of contemporary Bulgarian writers. Through 2009 we will give you the chance to read the work of a dozen young and sometimes not-so-young Bulgarian writers that the EKF considers original, refreshing and valuable. Some of them will be translated in English for the first time. The EKF has decided to make the selection of authors' work and to ensure they get first-class English translation, and we at Vagabond are only too happy to get them published in a quality magazine.