One of the shifts that has been slowly taking place in Bulgaria since "The Changes," as most Bulgarians refer to the collapse of Communism 20 years ago, has been the re-emergence of an independent Bulgarian literary tradition. Not that it had disappeared. Simply that it had been quieted. There was once a time when merely to distribute self-published poetry or fiction among friends would have been punished by the thought police. Yet now Bulgarian writers are finding their voices again, and finding an audience, both in their country and abroad. Authors like Alek Popov, Georgi Gospodinov, Emilia Dvoryanova and Teodora Dimova, for example, are being translated into various languages. 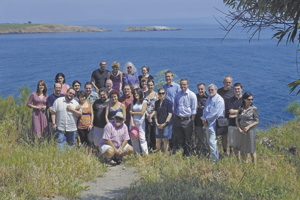 The Elizabeth Kostova Foundation was created as a means of encouraging creative writing in Bulgaria, and also to find readers for Bulgarian authors in other countries. One of these projects is the Sozopol fiction seminar, which brings together five native-speaking English writers with five Bulgarian counterparts – along with publishers, editors, and translators from around the world – to foster an international dialogue on writing.

This was how I found myself boarding a bus in Sofia in early June, with more than a dozen other literary types, to travel to Sozopol. As one of the NES fellows, I'd been honoured to have been chosen from more than 100 applicants from 13 different countries. However, I was equally nervous. Not only because I didn't speak a word of Bulgarian, but also because I knew very little about the literary tradition in that country. Yet, as soon as we arrived in the seaside town with its cobblestone streets and terracotta-tiled roofs, I was made welcome – both by the locals and my fellow participants. As Kodi Scheer, one of the other NES fellows would say afterwards: "From the moment we stepped into the fairy-tale realm of Sozopol, I was enchanted. Every part of the experience – from my gifted Bulgarian colleagues to the luscious food to the relaxing Black Sea – was pure magic. I left giddy and exhausted because I was in love."

However, this was no vacation. This year's lineup featured a series of publishing panels, readings and lectures on writing, but the core of the programme was the three-hour workshop each morning. The English-speaking workshop was led by Elizabeth Kostova, author of The Historian, which has been translated into more than 40 languages and has sold more than 5 million copies around the world. The Bulgarian workshop was led by Emilia Dvoryanova, one of the most widely read contemporary Bulgarian writers, author of such novels as Passion or the Death of Alice and Mrs.G. These sessions were unique, not only for their pre-eminent facilitators, but also because the notion of workshopping as a practice is a largely foreign one in Bulgaria.

There is a tradition in this country that writing is an inspired art, one transmitted from the divine to the human. As such, accepting suggestions to change one's work from fellow writers seems counterintuitive. Perhaps even an affront to one's art.

Dvoryanova, who is also an associate professor in Creative Writing at New Bulgarian University, suggested during one of the craft talks that part of this resistance stems from the era of Communism, when editors were censors. So it is a changed way of thinking for Bulgarian writers to see editing as positive for their work, rather than damaging.

Additionally, several of the Bulgarian fellows at this event explained that they had been initially hesitant to offer feedback on the work of their peers due to their academic training. Unlike in the United States, where writing courses are a part of the university curriculum, the Bulgarian approach to literature is more analytical and less critical. That is to say, students write essays elucidating the strengths of canonical works. But rarely do they assess a piece of writing for its flaws. So the workshop model is a foreign one for this reason as well.

This demystification of writing was a common theme. In one way or another, nearly all the discussions dealt with this issue. Josip Novakovich, who emigrated to the United States from Croatia when he was 20, and who currently teaches writing at Penn State University, did so by reading one of his stories and then discussing step-by-step the various "tricks" he utilised to keep working on it when he got stuck. After his talk, many of the Bulgarian and Englishspeaking writers expressed relief at hearing that such a talented author also faced these challenges as an artist.

This sense of solidarity was perhaps one of the greatest gifts of the conference. To share meals and classrooms with both emerging writers and internationally acclaimed ones was wonderful. Yet to do so in such a beautiful setting was truly inspiring.

Elizabeth Kostova was equally pleased. "I wouldn't have believed we could do better than we did the opening year," she said, "but the 2009 seminar exceeded my previous expectations. Having writers of the seriousness and calibre of Josip Novakovich and Georgi Gospodinov set the bar even higher, as far as I was concerned. We also had quite a deep series of public discussions about Bulgarian translations and publishing and some of the frustrations that Bulgarian writers face in their own country, and this opened up opportunities for new real solutions."

One of those frustrations is the 20 percent VAT that publishers must bear, which makes it exceedingly difficult for them to offer adequate compensation to translators for their work. On an individual level this is deeply troubling because of the artistry necessary to accomplish a successful translation. As John O'Brien, publisher of Dalkey Archive Press, stated: "Translators aren’t merely delivery agents or postal workers. They are scholars, researchers, and artists." But on a cultural level it is even more problematic because, without translators, Bulgarian literature simply cannot move beyond its borders.

Yet even with few translators working, there must still be a market for Bulgarian literature abroad. This was what made this year's seminar particularly exciting. For the first time, representatives from American publishers including Little, Brown attended, as well as those from Bulgarian publishers Ciela and Janet 45. Together, they educated the participants on both markets, as well as trading ideas on ways to find new authors, how to promote their books, and strategies for balancing literary and commercial publishing.

There were some hard realities, too. For example, only three percent of the books published each year in the United States are works of translation. Almost the same figure applies in the UK. Yet there was much to be hopeful about, too. For many years after "The Changes," most Bulgarians read mostly foreign pulp. In fact, Bulgarian authors frequently had to adopt Englishsounding pen names in the 1990s if they wished to sell. But that tide is turning. Last year the top four best-selling titles were written by Bulgarian authors.

Another first this year was a follow-up event in Sofia at the American Corner, which was made possible with support from the American Embassy, the National Culture Fund for Bulgaria, and the American Foundation for Bulgaria. The schedule included a lecture by Josip Novakovich in conjunction with the release of the Bulgarian edition of his book Fiction Writers Workshop, a reading by the 2009 fellows, and a panel discussion, moderated by Miglena Nikolchina, on Literature Diplomacy. Although many important issues were raised during the panel, perhaps the most striking one was put forward by Kapka Kassabova, author of Street Without a Name, a memoir of her childhood in Bulgaria. She advocated thinking of literature not in terms of national identity, but human issues – love, longing, loss, desire. After all, it is the grappling with these emotions and impulses that has constituted all great writing, regardless of culture.

It was then I realised that my fears of being an outsider before my trip to Sozopol had been unnecessary. United by art, national boundaries didn't exist. We were writers first, citizens second.

The Elizabeth Kostova Foundation and Vagabond, Bulgaria's English Monthly, cooperate in order to enrich theEnglish language with translations of contemporary Bulgarian writers. Through 2009 we will give you the chance to read the work of a dozen young and sometimes not-so-young Bulgarian writers that the EKF considers original, refreshing and valuable. Some of them will be translated in English for the first time. The EKF has decided to make the selection of authors' work and to ensure they get first-class English translation, and we atVagabond are only too happy to get them published in a quality magazine.

Read 27057 times Last modified on Tuesday, 29 July 2014 12:26
Published in Fiction
More in this category: « DOWN THE ROAD TO HELL - AND THE FIRST CROSSING ON THE LEFT FROM LETTER TO OGYGIA »