THE HOUSE ON SALT HAY ROAD

Carin Clevidence is the author of the novel The House on Salt Hay Road. Her short stories have appeared in Story, the Indiana Review, the Michigan Quarterly Review, and FiveChapters.com, and her nonfiction in Grand Tour, Fiction Writers Review, and the Asahi Weekly of Japan.

A recipient of the Rona Jaffe Foundation Writers' Award, she has received fellowships from the Fine Arts Work Center in Provincetown and the Elizabeth Kostova Foundation, as well as residencies at Yaddo and the Hermitage. She lives in Massachusetts with her two children and is currently at work on her second novel. 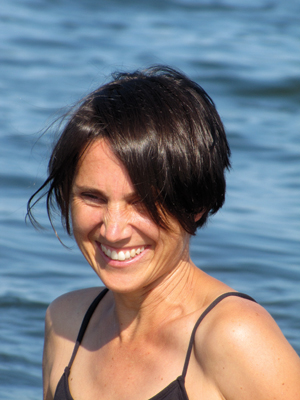 They stepped out of the door and the wind howled around them with a sound like that of a train going past. Off the porch, to the west, the surf ran in a wide torrent, awash with wreckage from the houses on the dunes. Crouching low to the sand, they set off east, away from the new inlet. Clayton walked in the lead. The woman followed haltingly, carrying the boy on her back. As they scrambled over the hillocks of sand Clayton saw a flock of small birds, chipping sparrows he thought, huddled in the lee. The birds squatted close to the ground in a wedge-shaped formation, their beaks facing into the wind. As Clayton and the woman drew near, the birds rose in alarm, and the wind whisked them away like specks of dust.

The woman, burdened with her son, began to lag behind. Clayton forced himself to wait. He was anxious to get to the bay's edge and angry with himself for not insisting they leave the house earlier. The woman was struggling through the beach plum, which caught at her boots. Clayton went back and signaled that he could take the boy. But the child clung to his mother, his arms clamped around her neck.

"Just for a minute, Eddie," the woman pleaded, raising her voice. "So Mama can rest."

The child closed his eyes and held on with a death grip, shaking his head so violently it looked like he was having convulsions. The woman lowered her chin and struggled on with the boy on her back.

As they neared the bay, the bridge came fully into view. It was standing, Clayton saw with relief, though the span seemed to sway in the wind. But it looked farther away than he'd imagined. Beside him the woman had collapsed on her knees and was holding the boy in her arms now, sheltering him from the flying sand. Clayton looked back along the bay toward the Gilpin's house. It was still there, though part of the porch had disappeared. Behind it, where the Everitt's house had been, the ocean was running headlong into the bay. Between the inlet and where they stood, Clayton saw a dock, a small white rowboat tied on the leeward side. The boat would just fit the three of them, he thought. He pulled at the woman's shoulder and shouted, "This way."

As they approached the dock, Clayton saw it shudder. The rowboat was tied fore and aft, stretched out like a man on the rack. Clayton strained to pull the boat in by the painter and cleat it closer.

"Get in," he yelled to the woman. He helped her free herself from her son's arms. The boy screamed and writhed. "Hold on," Clayton shouted uselessly. "Just a minute."

The woman jumped down into the boat. The instant her feet touched the seat, the painter snapped like a guitar string. The boat whipped around in the wind, pivoting on the stern line. With a scream that Clayton felt against his arms, the boy catapulted out of his grasp and flung himself after his mother. He hit the water with a noiseless splash. Buoyed by the life jacket, the child swept toward the rowboat like a bit of flotsam. The woman lunged out, nearly capsizing the boat, and grabbed him by the strap of his cork jacket. She hauled him over the side and into her lap. At the same moment the stern line parted. The boat with its two passengers shot into the bay like a horse from the starting gate at a race track. Standing on the dock, Clayton stared after it. It moved as fast as a car on Old Purchase Road. He was utterly alone. The boat dwindled before his eyes. Already he could hardly see their faces.

Beneath his feet the planks began to ripple. Clayton moved to the locust pole that secured the dock to the shore. Boards and logs swept past him, pulled from the dunes through the new inlet to the bay. An ice box floated past, and then a bath tub, carried upright at a jaunty angle. Above him, high in the air, sailed a green door with a brightly polished handle. Every few seconds another wave hit and white water and debris surged around the dock. Turning toward the inlet, Clayton saw the bulky shape of a house moving in silent slow motion through the shallow chop like a clam shell tumbled in the surf. As he watched, the front crumpled inward like a wad of paper. The gabled roof peeled off and sailed into the air toward the bay. It landed on top of the water with a bounce and spun toward him. Clayton threw his arms around the pole. With a crunch he could feel but not hear the roof lodged itself against the dock. Clayton jumped onto it and scrambled over the wet shingles to the peak. In the next instant the dock gave way beneath its weight, and the unmoored roof set sail.

Clinging to the floating roof, Clayton felt a wild exhilaration. He was glad to be alone, unencumbered by the woman and her clinging child. The rest of the world fell away, like meat from a bone; there was only him and the storm and he and the storm merged together, so that the wind throbbed through him, pounding in his blood. His body moved without hesitation, independent of conscious thought. One minute the roof had crashed against the dock, and in the next he felt the grooved shingles, rimed with salt, under his scrabbling hands. Each instant was charged with a shimmering physicality. He felt entirely sure of what he needed, moment by moment, to do. The possibility of death did not occur to him.

Looking up from his makeshift raft he saw the Taffy Point bridge in the distance. As he watched, it broke apart, silently, as in a Buster Keaton movie. It seemed to be happening in the past, as if he already knew that the bridge was gone. The minutes were both condensing and expanding. It might have taken a second for the bridge to break apart, or half an hour, or four hours, a lifetime. He looked for the woman and her little boy without really expecting to see them, remembering them only vaguely, as if they were people he had met a long time ago, or had heard about in one of his grandfather's stories. Sheets of water blocked his view. Clayton clutched the peak of the roof and wondered for the first time what it had been like to be born. He felt thrust into the headlong fury of the world, and at the same time it seemed clear that the world was ending, that it was coming apart before his eyes. The storm was like time intensified, exposing the inevitable ruin of every earthly thing: houses, trees, people, the land itself which broke apart, ripped like old fabric, and was crumpled and tossed aside.

The sky cleared a little and Clayton tried to get his bearings. He saw that he was still on the Great South Bay, though it was nothing like the bay he had known. A massive migration was under way; every stick of wood, every plank of lumber, every broken piece of flotsam seemed to struggle in the same direction. With each blast of wind, bits of debris lifted off the surface of the water like flocks of misshapen birds. A black dog passed close by, riding on the red hull of an overturned boat. When it saw Clayton it raised its black hackles and barked without sound. A shoreline appeared, flattened in the gale. Beyond the grasses, trees were writhing. The roof grounded with a shudder on a sandbar near what Clayton guessed must be the mouth of the river. Stretching his cramped legs he crawled to the edge. He dropped into the water and found that it reached only to his knees. The bay felt warm as a bath. Clayton picked his way carefully to shore. The wind still howled like a train. Doors and chunks of flooring flew by. He crept to a rise in the grasses near where the trees started. The trees themselves bent and flailed in the wind. Clayton fell exhausted in the marsh grass, his face pressed against the rough spartina. His mouth was parched with salt. From where he lay he could look out at the Great South Bay, and he watched as the wind scooped the water out of the basin like a child cupping sand to make drip castles. The water rose into the air. Revealed beneath it were dark patches of seaweed, gullies and troughs and the black, straight lines of ancient shipyards. The air smelled of the ocean and the bay together, and, mixed with the two, a charge like the one he had felt in the air around the swarm of bees.