by Paulina Petrova; translated from the Bulgarian by Angela Rodel; photography by Yana Punkina
Rate this item
(0 votes)

The Elizabeth Kostova Foundation and Vagabond, Bulgaria's English Monthly, cooperate in order to enrich the English language with translations of contemporary Bulgarian writers. Every year we give you the chance to read the work of a dozen young and sometimes not-so-young Bulgarian writers that the EKF considers original, refreshing and valuable. Some of them have been translated in English for the first time. The EKF has decided to make the selection of authors' work and to ensure they get first-class English translation, and we at Vagabond are only too happy to get them published in a quality magazine 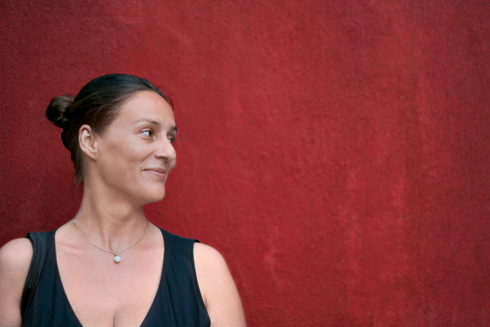 Paulina Petrova was born in Sofia. She is an alumnus of the Sofia School of Mathematics. She holds two degrees, in Economic Computer Science and in International Relations, both from the University of National and World Economy. She is currently working on her first two novels. Paulina has always wanted to write a book but her desire remained in the realm of those dreams which one tends to classify as "impossible." Less than two years ago it occurred to her that she could let her fantasy run, that she could sit in front of the white sheet of paper and pluck up the courage to put her fantasy down and have it turned into a novel.

David and his father lived alone in a small wooden house in the middle of the woods, which David had decided must be at the very edge of the world. Their home was tucked so far into the mountains that as of yet, after seventeen whole years of life and hundreds of dogged expeditions, the boy had not managed to reach any other inhabited place, nor had he seen another person besides his father.

When he was younger, his father had forbidden him from straying too far from the house, and when he went off "off to work," he refused to take the boy with him. David, however, like most children, would not take "no" for an answer. He tried everything he could think of to get his father to change his mind. But Gregory was unshakable.

David had a secret. He had noticed that his father always disappeared from one and the same place in a thick cloud of smoke. The child's natural curiosity urged him to try to follow his father. He hoped he would be quick and careful enough to succeed. Yet every time he jumped out from behind the tree he had been hiding behind and ran after his father, instead of figuring out where he had gone or discovering some trace of him, David found himself on a brand-new path that was completely unknown to him.

In the beginning he thought that by setting out down the path he would discover where his father had gone and boldly set off on the journey, yet not a single one of these journeys led him to the place he was hoping to go. For years the boy could not explain how every single one of the paths inevitably led him back home only moments before his father himself returned. Every time he managed to get home just in the nick of time (and as we said, this happened every time), he thanked the heavens for his wild luck, which helped him outsmart his father and keep his little secret.

But (as often is the case with children) David only thought he had a secret. Actually, his father (like most parents) had known what his son was up to from the very beginning and had taken precautions to protect David from the possible consequences.

What had Gregory done?

Well, very simply David's father was the one who'd made the paths. All of those paths David wandered along had been created by Gregory and they were enchanted. It was no accident and certainly not thanks to the heavens (nor to wild luck) that all paths inevitably led back home, and right on time, at that. The paths were created for David and David alone, and no other human being (besides his father) could possibly set off down them. So when he was away, Gregory could rest assured that his son was safe.

David had no way of knowing this.

Actually, up until two years earlier – until David turned fifteen – he only knew as much about the world as his father thought it necessary for him to know. The answer to any question that went beyond the sphere of absolute necessity was always the same: "You'll find out when the time comes."

The only question to which David received a slightly (but ever so slightly) different answer than the aforementioned one was his question about the water lilies. Every year on David's birthday, the water lily that grew in a small wooden box submerged in the makeshift pond behind the house blossomed. Its bud began to open with the dawn and by noon it was in full bloom. It was so blindingly white that if you looked at it in the daylight, you would instinctively raise your hand to shield your eyes. But since this is how things had always been, this didn't strike David as unusual. He had no way of knowing that lilies normally didn't shine blinding white in the light of day.

In the evenings of his birthdays, David and his father would pluck the blossom from the lily and let it be carried off down the river. The flower glowed pale blue as soon as it touched the water. For a few moments, the water parted and flowed around the lily as if around a rock, then gently lifted the bloom and carried it off downstream. This didn't strike David as unusual, either, because that's how it had always been – as long as he could remember. He had no idea that lilies, as a rule, did not glow. Or that usually (to say nothing of "never") water does not flow around a plucked flower as around a stone.

Still, there was something David wanted to find out…

He was already old enough (a whole seven years old) to notice that the lily did not bloom on his father's birthday. Actually, he couldn't remember his father ever having a birthday, which was, in fact, impossible, since he surely had been born. Which meant (as far as David could see) that either there had to be some reason why the lily didn't bloom for his father or there had to be some other reason why the lily bloomed just for him. So when his father squatted on the riverbank and stretched out his cupped palms to drop the flower into the water, David squatted down next to him as well and asked, "Dad, why do we do this?"

Gregory sighed deeply and looked his son in the eye.

"Because of your mother… I want her to know that you're all right."

David thought he saw tears in his father's eyes. But after his father blinked (just in time), no trace of moisture remained. So he couldn't be a hundred percent sure he had seen anything.

"She died when you were born… and when the time comes, I'll tell you more about it."

That evening, David heard the word "mother" for the first time, and realized that he had lost his mother almost as soon as he had gotten her. This made him sad. Knowing how much he loved his father, he would really have liked to have a mother, too… Surely it was wonderful to have one…

"Can I drop it into the river today, Dad?" David cupped his little hands together and stretched them out towards his father. "Please?"

Gregory hesitated for a moment – for no other reason than that he felt it was his duty to send this message to Eleanor himself. On the other hand, the boy also had the right to try to communicate with his mother, didn't he?

And so he gave in…

David took the flower from his father, stood up and waded into the river. After inhaling its scent and gently kissing its petals, he bent over and placed it in the water. He turned around and walked the short distance separating him from his father, stuck his little hand in his father's and gritted his teeth so as not to cry.

When he managed to fight back his tears and his misty vision cleared up, the flower was already floating downstream. David looked towards the disappearing lily, took a deep breath, closed his eyes, and wished with his whole heart for it to reach his mother. And to bring her all of his love.

That same evening – the evening of his seventh birthday – David understood what pain was and cried inconsolably for the first time.

Well, by now it's clear that it would be more precise to say that it wasn't David who had a secret, but rather Gregory. And not just one secret, but several. What's more, truth be told, it wouldn't hurt to mention that he had no intention of keeping these secrets from his son his whole life. He simply figured he would tell the boy one by one "when the time came." Until the moment of truth arrived, however, Gregory's main task was to keep his son hidden well away from the world. Because as long as Drake Moon didn't know of the boy's existence, Gregory was invulnerable. He needed peace and security to bring up his son, to raise him on virtues and to pass on to him all the skills and knowledge that were his birthright.

The question of virtues was exceptionally important, as far as Gregory was concerned, because he believed, no, he was convinced, that bravery and a kind heart were the only solid footing a person could really fall back on to resist the powers of evil. And he also knew that for himself and his son, the true battles were only just beginning.

But let's not get ahead of ourselves. Before finding out what happened next, let's first go back and tell how it all began…