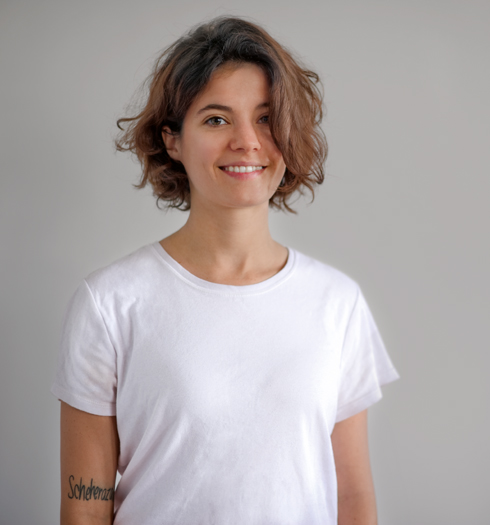 She is the recipient of a Buffalo Prize, a Bread Loaf work-study scholarship, and the Ropewalk Press Fiction Editor's Chapbook Prize. Her chapbook, Louisiana Maps: A Diagram of the Territory of New Orleans, is forthcoming this winter from Ropewalk.

He couldn't stop spilling oranges everywhere he went. When he was five, he was a hide-and-seek failure, when an orange always rolled out from under the slide or tilted open a closet door. When he went to the grocery store with his mother, he always had a wrist slapped when they left, because she reached for his hand and the sinister fruit would drop and spin serenely across the parking lot. He always apologized looking at his shoes, confused.

It wasn't until elementary school that it became a problem. By fifth grade, his mother was suspicious, because there were no orange trees in Brooklyn, but the kitchen always smelled sweet and the fruit bowls were always overflowing. She wanted him to talk to a therapist, for his kleptomania.

"Where are they coming from?"

Middle school was the worst part. At the same time as the reedy boys around him began to shoot up and trip over the ladders of their own voices, he heard snickers when oranges rolled down the back of his jacket and spun out onto the floor. He stooped. It got worse. They fell out of his pockets when he walked. They fell out his sweaty hand when he met a new girl. Once in the boy's bathroom, a tenth-grader with oily skin, whose father shot at dogs, held him against a wall and shook him hard while oranges filled his tucked in shirt and fell out his cufflinks. Others stood around and gawked. They called him a freak, or obsessed, or queer. One boy would only call him a commie, but that still bothered him.

It got a little better after that. Eighth grade was the worst, but after that he got a little keener. His family knew by then, and so did he. It stuck in his mind and sat there though, made camp, painted it on his brain-cave-walls so it was a part of him forever: he was the boy orange tree, and he would be.

His mother never took him to the doctor and he never bothered to go. It was very clear what was wrong. It was very clear medical technology had never encountered this exact problem and would not be able to fix it. He had enough of being a freak show, sideshow, carnival, weird-o. He suffered through high school by spending lunches on the sidewalk benches, smoking cloves and wearing baggy jeans. He threw citrus at cars where they exploded meatily like a punch landing. If one stopped to yell, he would yell back nonsense and feel like a hero.

"Buddy! Your car hit my orange! Man! Get out! Hey! Blockhead! Thief! Commie! Gringo! Pedophile!", until they drove away.

Sometimes he tried to eat dirt. It felt good but it dried his mouth out and tasted too coppery so he spit it out in clumps.

When he was in college it wasn't too bad. He was okay with waking up early to empty his sheets out the fifth floor window, aiming for the dumpster. His roommate only liked computers and didn't care about "his fruit thing." They had conversations. Girls in fraternity basements told him he smelled like their mother and bared their teeth. Sometimes one would kiss him: Her face would loom in like a crashing zeppelin – and then, after a beat she would jerk back with her hands on her mouth and her earrings swinging:

"Is your mouth full of twigs? Or something?"

He joined a lot of clubs and he sat in the back during meetings. He had friends but they were distant ones. He went to classes that weren't his and listened to professors talk. They asked him questions and he gave long, abstract answers full of "subjectively" and "liminal time-space" and "societal repercussions," while they nodded, and he didn't know what he was saying and he wasn't ever right or wrong. He took long showers and kept his desk neat and looked busy. He wrote a lot of bad poetry.

On graduation day he got a little bit drunk on champagne at 11am and took pictures with his parents. He thought about the freshman he'd been and how embarrassing that person was. It was sweltering, and the sun made everyone squint and duck a little. He felt hot and nauseous when an orange rolled out his long robe sleeve and over the chancellor's liver-spotted hand and under the podium. Four more fell on his way off stage. Some boys in the audience thought that it was a joke. They laughed or whooped. He skipped the after-parties.

He moved to Seattle and got a job, working the phones for the technical help department of a computer software company. He liked his job okay. He liked to picture his customers, and sometimes he imagined he could hear in their voice some camaraderie of freakishness, like a hook hand, or a peg leg, or a little tail. He always told them his real name. One day an old lady called; she sounded white, in her eighties maybe, and he imagined her grown son was paying for her but not visiting.

"Well, I just don't think this computer business is for me." She said, with a cheery sigh after a few minutes.

"Is there anything else I can help you with, ma'am?"

When she breathed in she held the phone too close to her mouth and it sounded like a sail filling.

"You know, I am about to make some chicken and mashed potatoes. It's been a long time but it's for a special occasion. You've been very helpful. Now I hope you go home and have a nice hot meal and a good squeeze, okay?"

He could have a hot meal at home. He had a kitchen full of baking ingredients. But they all ended up tasting to him sweet, and tangy, and too long in the sun. He started to think about his kitchen when he hung up. There were some dishes in the sink. He thought about them, and then he thought about the dishes in the sink last night, and tomorrow night, and about how he needed to buy new pillowcases, and then about the fat waddling Mormon who lived below him, and about the fat men in the cubicles around him, and all their tired faces, and so after work he went to a bar.

He never went to bars, had never really tried to go to bars. He felt sure that they would remind him of eighth grade. Now he went to the bar and discovered he was right. He wore a leather jacket because it made him feel safe. He sat on the corner like he saw in the movies and ordered whiskey and water. He drank one, and then he ordered another, and he drank another and one more until he was drunk. He saw a woman in a dark green dress sit at the bar. The air wobbled like he was looking through an aquarium. His head felt soft and made of chicken fat. He had another whiskey and water. Then he stood up and walked to the green dress and sat on the stool next to it. The woman looked at him. He was scared sweating and it was hard to look at her eyes. She had high cheekbones and sharp eyebrows that made her seem feline. Her upper lip was line-thin and she had a cluster of freckles just above her right brow like a gorgeous mistake. He decided he was in love with her.

"Hello." She smiled at him uncertainly.

He opened his mouth and choked as an orange, ripe and dimpled and shining, rolled out of his mouth and onto her lap, slick with spit.

"Oh God! What is wrong with you?" She jumped up disgusted, and fled backwards. The thick sweaty bartender was rolling his eyes at him.

"Sorry," he grumbled drunkenly and emptied his pockets onto the bar and walked out the door.

"Hey!" yelled the bartender. "You can't leave your goddamned fruit in here!"

"My goddamned fruit," he mumbled, climbing to the street.

That was when he began to get really angry. Oranges, he would think to himself. Why does it have to be those goddamned oranges. He wondered why it had to be only that one fruit, all the time. Why not strawberries, patient and cheerful under their little green caps, or pears with their tempting swells. He wanted to smell cherries in the morning, or feel the fuzz of a kiwi down his spine like a tickle. Even blueberries, bruise-purple and staining his clothes, or lemons, sharp and bright and starry. A pomegranate to hold him in hell with its glossed ruby guts, or guavas, tender and exotic, or grapes with their lucent skin, quivering on the bunch. Or apples, honestly, the most visceral and holy of them all. He began to dream of it. He dreamt of any other food. When he dreamt, the colors were muted. When he woke up, he spit out seeds like teeth.