by Bistra Velichkova (BG); translated from the Bulgarian by David Mossop; photography by Anthony Georgieff
Rate this item
(0 votes)

Bistra Velichkova (BG) was born in Sofia, Bulgaria. In 2011, she received a joint MSc degree in European Studies from the University of Twente, Netherlands, and the Westfälische Wilhelms-University of Münster, Germany. 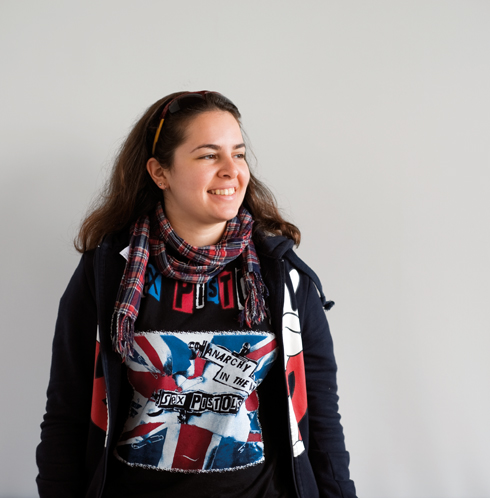 In 2009, she obtained a BA degree in Journalism and Mass Communications from the University of Sofia, Bulgaria. As a journalist, Bistra has published articles in various printed and online editions, such as Pressa Daily, Dnevnik, Kultura, Trud, Duma, E-vestnik, WebCafé, OFFNews and more. As an author, she has published poetry and prose in the literary newspaper Literaturen Vestnik, More Magazine, 39 grams, the anthology Lirika 2011, the online magazines LiterNet, Public Republic, Dictum and more.

In November 2012, Bistra Velichkova was nominated for the Veselin Hanchev National Youth Poetry Contest. Earlier that year, she won third place in the Rashko Sugarev national short story competition. In May 2012, she was awarded a fellowship from the Elizabeth Kostova Foundation to participate in the fifth annual Sozopol Fiction Seminars. In 2010, she was awarded first place in the literary competition Paris Without Love, organized by Ciela Soft and Publishing and the author Mona Choban.

(…) Gesh and I kissed for the first time at the Monument. There were bottles of beer rolling around our feet and cigarette butts smouldering beneath our army boots but Gesh and I were frozen in a moment of eternity: two ragged figures, embracing in the silence of the night between the bronze silhouettes and bayonets of Russian liberators. That same evening I went home drunk for the first time in my life. My mother got home a little bit after me. She was more drunk than me, thank God, and didn't realise.

The next morning I could hardly drag myself out of bed and almost missed school. I spent the first couple of lessons asleep on my desk. Unfortunately they were history lessons and afterwards Mrs Paskaleva asked me to go with me to her study. She said she wanted a word with me. She sat down behind her desk and made me stand opposite her. All I wanted to do was sleep and couldn't focus on the hand in front of my face. Then she started on at me: When you're young, you have no idea how dangerous the world is outside and there are so many things you don't understand and so and so on… After a lengthy monologue on the subject she asked me to look into her eyes and then without a warning she asked me if I took drugs. Just at that moment I wanted to ask her if she knew how much warmth the bronze statues of the Monument gave off? I wanted to tell her about Gesh and everything that had happened the night before. Instead I just stared silently at the elderly woman opposite me, thinking that there was no place for me in the "glorious" times in which she was living. "Why won't someone lend me a cast-iron view of life…?" Milena was the only person who understood me at moments like that.

After school I met Gesh at the Monument and he showed me his latest acquisition – a tattoo machine. He had got it second hand from the antique shop near the church. He took my hand very gently. He turned it over and on the inner side of my wrist he wrote "Forever" in cursive letters. . . I watched drowsily as the black ink penetrated beneath my skin. "Forever!" I whispered and kissed Gesh. Then we drank beer and we listened to Gesh's favourite band, Kale until it got late. I got home at two o'clock in the morning. (...)

It was only when I left school that I really felt free. After all those painful years spent in dusty class rooms, sitting at worn-out desks, I had developed a deep mistrust of schools and educational institutions in general. I really began to wonder if you could learn anything worth knowing at school. But there was one thing I had learnt: and that was, to trust more in the lessons life taught me than the words uttered by teachers' lips. The same teachers who shut us up in the warmth and security of the classroom like hothouse plants, while life is something happening just a couple of streets away! The same teachers who menaced us with wooden pointers while sermonising about the truth. And all the time the truth is outside – sitting somewhere on a bench in front of the Monument. The truth is where I meet Gesh every day. And don't you go and tell me as well that I'll be sorry about it one day, because I won't! One day the people sitting behind their dusty desks and computers will be sorry. If you ask me, you have to give in to your innermost impulses and break out of the institutionalised frame. Frames are used to put boundaries on beauty when you're at an exhibition. Where there's limited room and a lot of pictures have to be put up in a small space. Life isn't a museum and there's plenty of room for beautiful unframed pictures.

Soon after I finished school, Gesh's parents decided they wanted to separate us. I was still madly in love with him, and I was sure that he was in love with me. But his parents didn't like me. They thought I was a bad influence on him. I wasn't like the normal girls; I always dressed in black clothes and boys' army boots. I knew that was why Gesh liked me, because I was different from the other girls. But soon I realised it wasn't up to me. Gesh's parents sent him away to school in America to get him away from his "decadent" lifestyle in Sofia. That really hurt me! Gesh was under my skin, literally and figuratively. I couldn't stop thinking about him. (...)

After fruitlessly traipsing around New York with my suitcase in search of an apartment, I sat down on the sidewalk on a corner of Times Square. Night was slowly falling. The huge number of flashing neon advertisements frustrated the fall of darkness. My army boots were dirty and dusty. My hair band was unable to contain the flyaway strands of my messy hair. The shadows under my eyes were heavier than my luggage. I gazed up and tried to take in the tall skyscrapers as they disappeared into the dark blue sky. The cars screeched incisively as they crawled along in the traffic jams. I leant back for a moment against my suitcase and drifted off. I could hazily hear the passers-by shouting at me. I was too sleepy and tired to react. Suddenly I saw Gesh standing in front of me. I held out my hand to reach him… and suddenly woke up.

Another day in New York and another job interview. Notice on the door of a typical American snack bar: "Hiring Waitresses!" I go in. It smells of ready-made sandwiches and greasy French fries.

"Hi, can I help you?" A black woman says to me with a broad smile.

I tell her that I've come about the notice on the door. She invites me to sit down and wait for the manager. "Manager!", I thought to myself crossly, "Another stuck-up teenager with uniformly short-shaven hair and a company shirt buttoned up to his neck!" In the past few days I had seen enough of America's clean shaven straight-A students to last me a life time. To hell with them all and the boundless opportunities of their boundless country! I just hoped that they would give me a job at last. A door opened somewhere at the end of the corridor. The manager, a young man in a suit walked towards me. I was right about everything: from the white shirt to the self-confident walk. He walked up to me and offered me his hand with a smile:

"Hello! Are you the applicant for the job? My name's George. Very nice to meet you!"

I look into his eyes and am lost for words:

The young man looks at me with embarrassment. He wrinkles his forehead in disbelief and he says nothing.

"It's me, Gesh! Don't you remember me? Bulgaria? The Monument? Gesh?"

A spark of realisation seems to flash in his eyes for a split second. But it's just as quickly dispelled by his previous, expressionless business face.

"I'm afraid you've made a mistake! But that doesn't matter. It's just one of those things. Let's get on with the interview, shall we?"

"Gesh! It's me! It's me, Gesh!" My sudden wave of excitement and joy begins to give way to despair. I feverishly roll up the right sleeve of my shirt and show him my tattoo:

The security guards throw me out into the street, but I continue shouting:

That same evening I spent a long time wandering the streets of New York. I tried not to think. I sat down on the steps of Union Square, lit a cigarette and opened a bottle of beer. All around me there were groups of punks, heavy metal fans and hippies... They were dressed in torn jeans with purple, green and red hair. Some of the boys had punk crests like Gesh. Others had waist-length hair. There were shaven-headed girls with countless piercings on their faces and bodies, and tattooed flowers and skulls. I could hear black teenagers rapping on saucepans. Couples in love kissed and the silver balls of their tongue piercings clicked against each other. Everything reminded me of the Monument. I thought about Gesh again, about the school, about eighth grade and my first beer; the kiss on the bench, our dirty army boots, intertwined with each other, while the stars slowly sprinkled the sky, illuminating the night of our carefree existence. I thought back to Mrs Paskaleva and my class teacher with a feeling of fondness. How wrong my teachers were! I drank my beer slowly. I thought about my mother. Was she still working in that smoke-filled bar? Was she happy? I took a drag on the cigarette and exhaled the smoke slowly. For the first time in a long time I really felt free, I really felt myself. The tasteless "Corona" helped me swallow my bitter thoughts. At that moment they were the only thing which had any taste. I looked at my right hand holding the slowly burning cigarette. On the inside just above the wrist, I read the black-inked words out loud: "Forever". I exhaled the smoke and threw the cigarette into the dust. I tried to put it out, but it just went on burning. Forever.