LOVE LETTERS and THE REAL VERSION

The Elizabeth Kostova Foundation and VAGABOND, Bulgaria's English Monthly, cooperate in order to enrich the English language with translations of contemporary Bulgarian writers. Through 2008 we will give you the chance to read the work of a dozen young and sometimes not-so-young Bulgarian writers that the EKF considers original, refreshing and valuable. Some of them will be translated in English for the first time. The EKF has decided to make the selection of authors' work and to ensure they get first-class English translation, and we at VAGABOND are only too happy to get them published in a quality magazine.

Excerpt from The Breathing Hill 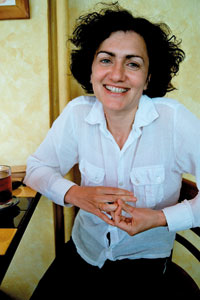 Maria Dobrevska was born in 1961 in Varna. She graduated in Philosophy and German Language Studies at the University of Sofia. She translates modern German authors for various newspapers and magazines.She has three books with poetical texts published under the nom de plume Maria Karo, and many publications in magazines and newspapers such as Vitamin B, Altera and Literaturen vestnik, or Literary Gazette. Since 2004 she has been writing prose and publishes under the nom de plume Betty Fayon.

My career as a writer of love letters began quite some time ago. I wish I had preserved copies of some of these, but, thinking twice, you would hardly like to read such sentimental writings. And, excuse me, copies of love letters sounds like the ultimate lie (and, Frederick, don't lie that you remember or that you've kept copies of your letters to Alice).

The latest one was funny, though.

Usually Mr A. walks along the corridors, where I most often meet him by chance. Let me introduce you: Mr A. is big, nice, middle-aged gentlemen, almost always in a hurry (he goes under the summer nickname of "The Breathing Hill"). Let's say there is a meeting. Poor Mr A., he really attends at least three meetings per day. Here I would like to digress a bit and describe how Mr A. walks. Just very briefly: his hands resemble a pair of oars and they serve him to scull the air. His belly juts out front and his shirtsleeves are usually rolled up. A ship's captain, who started his career as a ship's boy though, wiping the deck with a brush.

Oh my God, Mary hasn't seen Mr A. for several days already. Can you imagine how she suffers. The day before yesterday, while working on something on her computer, she cut small pieces of paper, just like that, from the reverse side of used sheets. She wrote the beginnings of several letters, what she had missed the chance to say to Mr A for these several days. It's not that Mary and Mr A. are not on speaking terms. But rather, as she sees him she ducks her head, but still there are certain things, which she would like to say to him.

On the first piece of paper and Mary wrote:

On the second one:

The third one said only:

And the fifth, in order to have something more specific:

Why do you like to have Krassi T. so much?

(Not that you need to know it, but Krassi T. is a conceptual artist, whom Mr A. likes very much. So this question made the remainder sound more or less justified.)

Mary has been carrying the pieces of paper in the right pocket of her jeans and then in the left, for at least three days. They began creasing a bit, and she didn't know why she was carrying them and how she would give them to Mr A. Even if it was before New Year and if those were not small sheets of paper but rather greeting cards, it would not be very appropriate to give them on the stairs or along the hallway... But Mary knew that she needed to give out these pieces of paper, and even, if she had a chance, she would make these five pieces of paper into flying confetti and when Mr A. passed... As you see, Mary was not very inventive and her love letters were made up of no more than five sentences. This is why she wanted to apply the effect of Walter Benjamin on, you name it, of the art in the era of…, I forgot what reproducibility.

Today, she had something to pay to the accountant on the third floor.

The accountant was in love with the steward, who was taking some money from her that moment in order to buy some... stewardship things. They were both too busy talking and did not even look at Mary. Mary thought that today was the right time to give the pieces of paper. It was Friday, she has been carrying them in her pocket for a whole week. As she realised that no one saw her anyway, she thrust her hand in her pocket and pulled the papers out so as to be ready if... But she was a bit nervous in this and the papers spilled on the floor. She just bent to collect them when she heard the voice of Mr A. from the hallway. She felt so embarrassed but she didn't have too many options. The sheets were in her hand, and Mr A was approaching in big strides the turn of the corridor, where nobody could see what Mary would give him. She dashed and approached him from behind, touching him on the shoulder of his jacket. He turned, looking bewildered and serious. Then Mary handed him the first paper saying "good morning." On his big palm, the paper seemed even more insignificant, not to say that it was about 11 o'clock already. While he gazed, reading it, she handed him the next one, he pushed the first one mechanically along his big palm with his thumb and took the "good afternoon" sheet, reading it and producing something like an "A-ha" with his mouth. Then again, with the fingers of the same hand he pushed off on his palm the second sheet and took the one saying "yes." At this point Mary hesitated, she took it back wondering which one she should give – the one with the "yes" or the one with the "no." She held them next to one another hesitating about a second, but then she handed one of them and the second one immediately afterwards. Then, shuffling the papers altogether through his palm, Mr A. finally took the fifth one and began reading...

Mary ran for the accountant's room as if nothing had happened. Mr A went along his direction over the corridor, the opposite way. All of it really happened in the turn of the corridor. When she turned lightly at the last moment, she noticed how he put his hand in his pocket, that of the jacket or the trousers, she was not sure.

Afterwards, Mary wondered for a whole day what a man like Mr A could do with five small pieces of paper in his pocket. 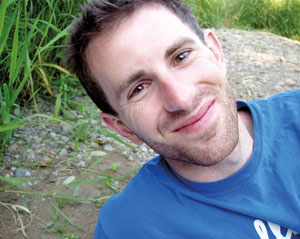 My date asked me, "Do you ever get the sense that this life, it isn't really yours?" She waved her arms when she said "this life," as though her life – or mine – was this tavern, a kitschy place with license plates nailed to the ceiling and a smell like year-old beer stains, and that's it.

"What do you mean?" I said, though I knew exactly what she meant. A week earlier, driving home from my girlfriend's place late at night, rain blurring the windshield faster than the wipers could clear it, I'd pounded my fists against the steering wheel and hollered, "What am I doing here!" I didn't mean anything about my girlfriend. What I meant was, what in the world was I doing in Corvallis, Oregon? It rains constantly in Corvallis. When it's not raining, it smells of cow manure. I'm from the beach. I'm from San Luis Obispo, California. Whenever I think about it, even right now, it gives me vertigo.

But I'd dated enough to know it was better to ask questions than to talk.

"I mean," my date said, and paused. She wrapped a lock of carrot-orange hair around her finger, then caught herself and let it fall. "Let me illustrate with a story," she said, and grinned in a way that meant, We're on your turf now.