What better way to celebrate the Bulgarian alphabet on 24 May than bringing Bulgarian writers together with their international counterparts? In the spirit of Cyril and Methodius, the original pioneers of Slavic literacy, the Elizabeth Kostova Foundation hosted its first annual summer fiction-writing seminar in Sozopol in May 2008. 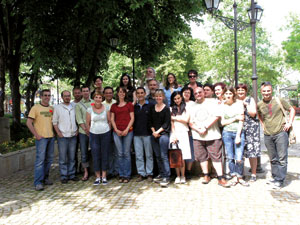 The seminar gathered five fiction writers from Bulgaria and five English-speaking fiction writers, including one from Japan - all selected after fierce competition among 80 applicants from 10 countries. For three intense days, the participating writers explored their craft through mutual exchange under the guidance of American writer Elizabeth Kostova and her Bulgarian colleague Emil Andreev.

Theodora Dimova (Bulgaria) and Kate Mosse (UK) delivered special guest lectures about the process of writing and read from their latest works. In informal roundtables the participants and the visiting speakers examined topics such as the art of translation and the publishing process, including how to work with agents and editors.

The seminar closed with students reading each other's work. In the issues to come VAGABOND will feature excerpts from works by the following participants:

Sozopol. For a brief period of time everybody smiles at everybody else. The sea is a very pale blue, with rare pools of violet. Bulgarian writers read their stories to American writers, and vice versa. We all go to a nearby island where seagulls fly low to protect their young, fragile as the friendships forming between us. The sea is reflected in the eyes of our host, Elizabeth Kostova, when she says the whole experience is like eating chocolate cake.

After each conversation with our tutors I feel enriched and more confident. I now know how I will end my first novel. I will always remember the things I learned here because for the first time in my life I felt my work was understood and appreciated. Writing is a lonely business and that won't change. I am back at my computer in a smoggy working-class suburb of Sofia and I realise I wouldn't have had the courage to go on with my work if hadn't met all these talented people on the shores of the turquoise sea.

"Seagulls, no-longer-an-island, fiction writers, and figs! Bulgaria is a country that knows how to celebrate its alphabet. The Sozopol Fiction Seminars captured more than a little of this love of Language - its use in storytelling and also communicating and translating across cultures and styles and times."

The seminar was one of the greatest gifts a young writer like me could be given: a group of kindred writers gathering for the love of stories. Sozopol was a little piece of heaven. Thank you!

The Elizabeth Kostova Foundation's Sozopol Fiction Seminar was a fantastic way to meet writers, editors and translators. I've visited Sozopol many times before - I am married to a Bulgarian and lived in Sofia for three years - but in the past, Sozopol has been a place to eat, sleep and lounge on the beach. I had never been to the Black Sea for professional reasons, and the whole idea of working in Sozopol seemed like an oxymoron to me. So it was a pleasant surprise to discover that the seminar was extremely beneficial. It opened my eyes to the world of Bulgarian writers and publishers, while feeling like a vacation. The seminar was also a wonderful opportunity to promote my book, _Falling Through the Earth[ital], which was just published in Bulgaria by Ciela. I hope to be back in Sozopol again next year.

You don't become a writer in three or four days, but it was very useful for me: we read and dissected, boiled down our stories to narrative skeletons, looked at details, discussed possible versions and interpretations. The atmosphere of good will and the constructive criticism we received from accomplished, successful writers was striking. Writing is a lonely intellectual pursuit, but we all need to stay abreast of what is in and what is out in the literary world and the best way to do this is to meet with fellow writers. It's great that Elizabeth Kostova is thinking of making the workshop an annual event and I hope that its logical conclusion will be the setting up of a creative writing program at one of Bulgaria's universities.

The Island
Every morning, from the balcony of my room in Sozopol, I would look out across the Black Sea to the little grassy island, the pale tower of its lighthouse, the white gulls wheeling wildly in silence. One bright morning the thought came to me: they look like paper, those gulls. A manuscript, a story - set, of course, in Sozopol in late May, at a gathering of writers - gloriously scattered in the wind, there for anyone to read. I'd come to Sozopol with writing - whether in Bulgarian or in English: it is all the same in the end - much on my mind, and here the morning had offered up its own vision, written in the air in those gulls. It's a gift - that morning by the Black Sea, that island - I'll always carry with me, wherever I go.

The Elizabeth Kostova Foundation and Vagabond, Bulgaria's English Monthly cooperate in order to enrich the English language with translations of contemporary Bulgarian writers. Through 2008 we will give you the chance to read the work of a dozen young and sometimes not-so-young Bulgarian writers that the EKF considers original, refreshing and valuable. Some of them will be translated in English for the first time. The EKF has decided to make the selection of authors' work and to ensure they get first-class English translation, and we at Vagabond are only too happy to get them published in a quality magazine.