The contrast between the drab town of Devnya and its Museum of Roman Mosaics is shocking – the modernistic concrete museum building preserves some of the best mosaics ever found in Bulgaria.

Here they are, astonishing images made of thousands of stone tiles, exhibited in situ in a museum that was purpose built for them in the early 1980s.

The centrepiece of the exhibition is a head of Medusa, her hair a tangled mass of swirling snakes, her eyes looking sideways, to someone or something unseen by the visitor. This image is far from its origin in the myth of the monstrous Medusa, whose terrible face would turn all living things to stone, even after Perseus cut off her head. The hero gave his gruesome trophy to the Goddess Athena, who put the severed head on her shield, the Aegis, to scare her enemies away.

Just like Athena, the people in the Graeco  -  Roman world used paintings, amulets and sculptures with the head of Medusa as spiritual protection against evil supernatural powers which might invade their houses, temples and graves. This is why the owner of the spacious domus, or urban mansion, in Devnya ordered the mosaic with Medusa for the floor of his banquet hall.

Five rooms of the Devnya domus used to be covered with mosaics. The Medusa is the best preserved of them, and two more scenes survived in relatively good condition until the late 1970s, when they were discovered by archaeologists. The owner's bedroom was decorated with a suggestive scene of Zeus in the guise of a satyr, wooing the Antiope nymph. The women's quarters were decorated with allegories of the four seasons and, for some reason, a depiction of a pair of sandals.

The lavish domus was built on the cusp of the 3rd and 4th Century AD and each detail in it shows how affluent and important its owner was. The mansion spread comfortably over a whole insula, or a city quarter, and had a colonnaded atrium and 21 rooms.

At the time, Marcianopolis, the ancient predecessor of modern Devnya, was one of the most prominent and largest Roman cities in the eastern Balkans. It was founded in 106 by Emperor Trajan (98  –  117) beside the Devnya River, about 20 km from the Black Sea. Its name was supposedly a nod to the emperor's sister, Marciana. A legend recorded by the historian Jordanes tells how the location of the city was chosen. One of Marciana's servants went to the Devnya River for water, but unfortunately dropped her heavy gold pitcher into the cold waters. Then a miracle happened – the river threw back the pitcher. The emperor decided that this was a sign from a benevolent local deity, and founded Marcianopolis at the site of the incident. 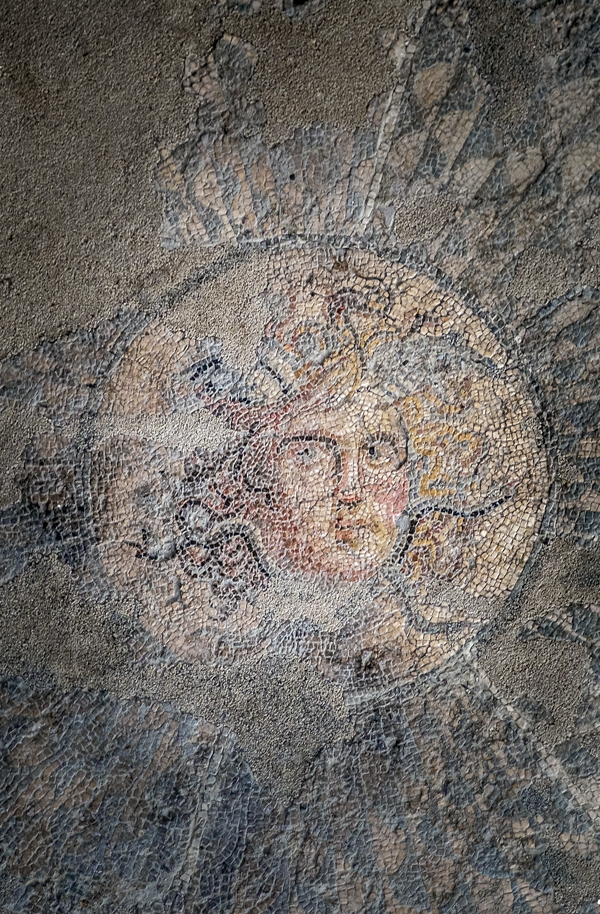 In Antiquity, the head of Medusa was a potent protection symbol

The true reason for the founding of Marcianopolis, however, was more pragmatic. The city's environs were rich in top  -  quality limestone quarries. This type of rock was a popular building material and was exported – as it is today – to other cities. Marcianopolis was also on the crossroads between the routes to the Black Sea and those through the eastern slopes of the Stara Planina mountains.

For its citizens, however, this combination of location and resources was both a curse and a blessing, as it meant they could accumulate wealth through trade, but also that they were a target for those who coveted their riches.

The town flourished, experiencing its best times under the Severan Dynasty (193–  235). After the administrative reforms of Emperor Diocletian (284– 305), Marcianopolis became the centre of the Moesia Secunda province, in the Thrace diocese, outshining nearby Odessos (today Varna). The city was completely rebuilt at the end of the 3rd century, and in the 4th century became the seat of a bishopric, with a lavish basilica for the growing number of Christians.

The mosaic - decorated domus is the most prominent remnant from this period of prosperity, but there was more. Marcianopolis had a large amphitheatre which could accommodate 3,500 spectators, decorated with fine architectural details. Sadly, it is now overgrown and cannot be visited. The sarcophagi exhibited in front of the museum were imported in the 2nd - 3rd centuries from Proconnesus (modern Marmara Island in Turkey), probably by sea via Odessos, bearing witness to the wealth of the local citizens and their trade contacts. The coins of Marcianopolis consistently depict a triumphal arch or a gate decorated with statues of Septimius Severus, with his wife and two sons. The structure definitely existed, but its whereabouts are unknown, as the rest of Marcianopolis is largely unexcavated.

The city got its first defensive wall by the end of the 2nd century, and after the mid - 3rd century it was struggling with various degrees of success against the invasions of a range of the so - called Barbarians. During the First Gothic War in 366 - 369, Emperor Valens (364 – 378) even made Marcianopolis his temporary capital and a base for the imperial army. In the following centuries attacks continued, and in 447 the Huns of Attila captured the city. Less than three decades later, in 471, Goths settled in Marcianopolis.

The attack which the city could not survive came in 614 - 615. After this Avar invasion, Marcianopolis was abandoned. In the Middle Ages, people returned and settled on its site, but the ancient ruins were only identified as belonging to the famed Marcianopolis as late as the Russo -Turkish War of 1828 - 1829, when they attracted the attention of a historian travelling with the Russian imperial army.