In Indipasha, the first Sunday after Easter is celebrated with prayers and candle-lighting by a supposedly miraculous spring. The spring has been venerated since Antiquity

"Idolaters! You are not true Eastern Orthodox Christians," the monk at St Spas monastery near Yambol scolded us while he was locking the gate of the supposedly miraculous cave spring his abode is famed for. Our sin? We had not lit candles when we entered the church. He, however, did not see any contradiction in the fact that the veneration of "healing" springs is a tradition that Eastern Orthodoxy in Bulgaria has inherited from paganism.

This example is a good illustration of the form of "voodoo" Christianity now practised by many Eastern Orthodox Bulgarians, with the tacit or not-so-tacit approval of the Church. Few of those who identify themselves as belonging to what Article 13 of the Bulgarian Constitution calls the "traditional religion of Bulgaria" can tell the difference between this denomination and Roman Catholicism. They do not know either the words or the meaning of the Apostles' Creed or Our Father, and will struggle to tell John the Baptist from John the Evangelist. They go to church mostly at Christmas, Easter and other major feasts. Still, they insist on being baptised, married and having a funeral service conducted by a priest. They queue to pray at supposedly miraculous icons and invite priests to bless their new offices, apartments, hotels and even cars. If they have the money, they celebrate the successful overcoming of an obstacle in life with the sacrifice of a lamb that has been blessed.

Of course, they light candles. One for each member of their family, be they alive (at the specially designated place "for health") or dead (at the place for the deceased).

There are exceptions, of course, but for most believers, Bulgarian Eastern Orthodoxy is a kind of superstitious pageantry, a triumph of ritual over substance. As with so many things in this country, the explanation is historical, and spans not centuries, but millennia.

In Bulgaria, Christianity arrived before paganism had died out, leading to the amalgamation of beliefs and rituals that still defines the spiritual life of modern Bulgarians. The earliest Christians appeared in today's Bulgaria in the 2nd century, and after the religion was state sanctioned in the Roman Empire, in the 4th century, the number of neophytes grew. Like everywhere else, the new religion needed to win the hearts of the heathens, so many compromises were made. Old Thracian, Greek and Roman deities morphed into brand-new Christian saints and pagan feasts received a Christian makeover. Ancient Thracian and Roman shrines to the water deities became springs blessed by the Mother of Christ, the Thracian God Rider shape shifted into St George, the nameless Thracian Goddess became St Marina, and so on and so forth. The list is long.

The new religion did not have it all to itself for long. The Barbarians stormed across the Danube in regular waves and in the 6th-7th centuries two of these peoples settled, bringing with them their own deities. These were the proto-Bulgarians and the Slavs, the ancestors of modern Bulgarians. Centuries passed until Christianity made a comeback, in 863, when Prince Boris imposed it on the Bulgarians. Paganism persisted: the prince had to kill 40 aristocratic families (babies and all) who refused to part with their ancestral god. Gradually, the new-old religion took hold, helped by the fact that the liturgy was in the Bulgarian language instead of the unintelligible Greek. Still, Christianity left many people uninspired, leading to the proliferation of an unorthodox sect, Bogomilism, in the 10th-15th centuries. 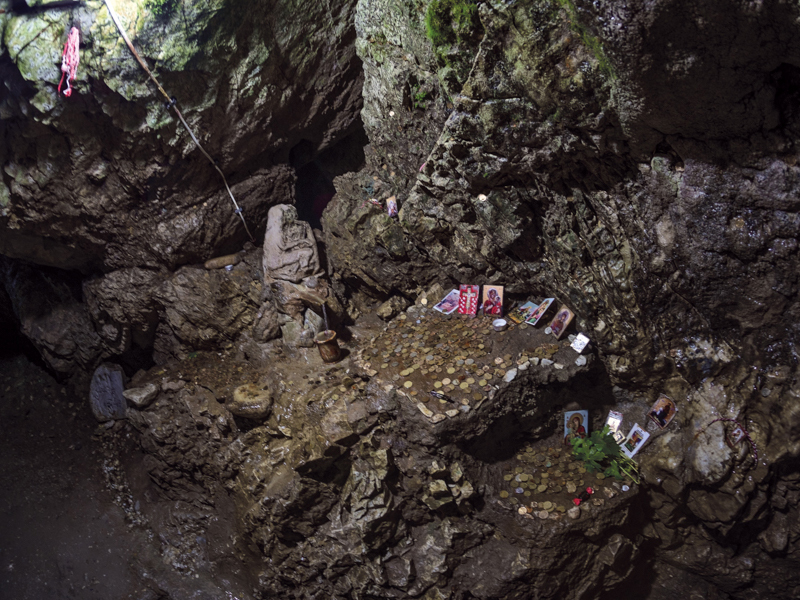 Icons and coins left for memory or good luck began to appear here and there in the Dyavolsko Garlo, or Devil's Throat, cave in the Rhodope. According to a legend, Orpheus descended into hell from here

When Bulgaria fell under the Ottomans, at the end of the 14th century, things became even worse, as the local Christian tradition was subjugated to the Greek-dominated Constantinople Patriarchate. Living outside the cities, the majority of Bulgarians were left with priests who had limited knowledge of Eastern Orthodox philosophy. Gradually, religious teaching transformed into what historians call Folklore Christianity, a combination of dogma, superstition and spirituality, with a heavy reliance on good old paganism. At the time, people believed that Dyado Bozhe, or Grandpa God, walked the earth, rewarding the good and punishing the bad, that vampires and goblins raged in the days between Christmas and Epiphany, "when God is still young and is not baptised," and were certain that the only way to protect yourself from these evil creatures was to wear something red, or made of iron. They believed, too, that the souls of the dead were a hungry and thirsty lot and, to appease them, they would bring food and wine to their graves.

Receiving a proper religious education was virtually impossible under Communism. Between 1944 and 1989 religion was not banned but people were actively discouraged from practising it. Atheism was the official state policy, and many priests were recruited by the State Security. The craving for spirituality was channeled by the locally-grown esotericism championed by none other than Lyudmila Zhivkova, the minister of culture and the daughter of dictator Todor Zhivkov. This was when Vanga, the blind clairvoyant of Petrich, became widely popular and even top apparatchiks from Bulgaria and the USSR came to consult her.

Post-1989 democratisation brought about a surge in spirituality, and many religions and faiths flocked to fill the gap, from perfectly respectable Protestant denominations to a horde of clairvoyants and psychics claiming to be in contact with extraterrestrials. Instead of stepping into the battle for souls and actively promoting its teachings, the Bulgarian Church split in two factions and got busy reclaiming and making money from the property that the Communists had nationalised. Happy with the fact that the Christmas and Easter masses were now broadcast on national television, the clergy limited their interaction with the common folk to areas such as candle-selling (lighting candles bought outside the church is strictly verboten). Few of them care to explain that Christianity does not endorse sacrificing lambs and why this is so, or that Easter is something more than eating sweet bread and coloured eggs, or that leaving food for the dead is a pagan practice. Many churches and monasteries sell souvenir fridge-magnet icons and icon-adorned wristbands that supposedly regulate the blood pressure.

One of the biggest contradictions that the Church is involved in is St Petka Church in Rupite, near Petrich. Sponsored by Vanga in 1994, the church goes against the canon in both its architecture and its murals, one of which falls just short of depicting the clairvoyant as a saint. In addition to this, at least in theory, Christianity denounces clairvoyants as servants of the Devil, and yet the church was consecrated, and is now open and advertised on roadsigns as "The Church of Vanga."

In such an atmosphere it is hardly surprising that a number of practices which are more pagan than Orthodox are experiencing a revival. One of the most spectacular is Indipasha, a feast that takes place in Indipasha, near Malko Tarnovo on the Sunday after Easter. The ritual revolves around a cave and a spring, which in pagan times were probably a shrine to the Thracian Great Goddess and are now believed to have healing powers. People come, drink the water, and tie strips of their clothing to the bushes and trees, in the belief that by doing so they will get rid of their maladies. After that they, like true Eastern Orthodox Christians of Bulgaria, light candles at a makeshift chapel. Some of them leave a box of (opened) sweets in front of the icons, because, you know, saints would like to have something sweet from time to time, just like you and I do.

We are still trying to figure out how these reptiles, painted on the recently restored St Nikola church in Chernomorets, fit into the Orthodox iconography

People pray and lit candles – to whom? – at the chapel of the blind clairvoyant, Vanga, in the church she built near Petrich

The monastery of Golyamo Bukovo, in the Strandzha, was until recently inhabited by a monk who believed he had been abducted by aliens and commissioned murals that stun with their almost hallucinogenic colours

Indipasha is one of the many places in Bulgaria, Muslim shrines included, where people tie parts of their clothes to the tree branches in the belief they will be cured from their ailments 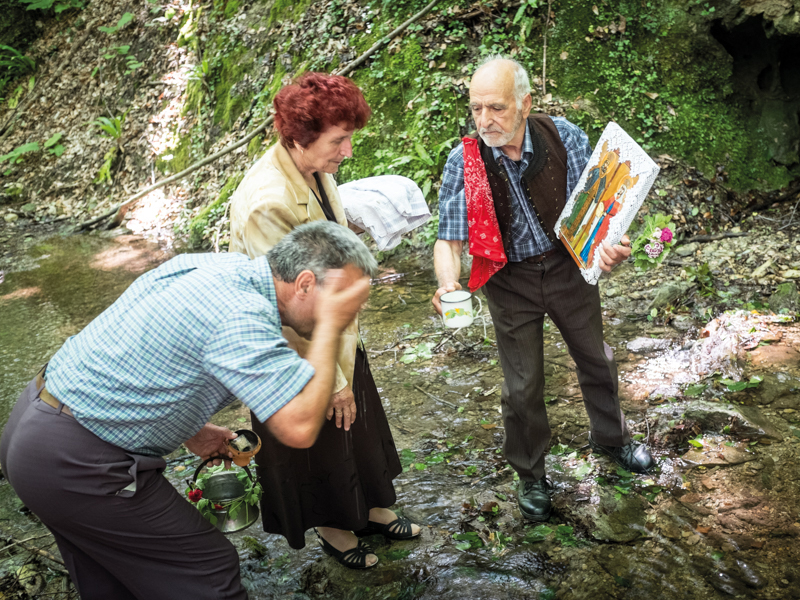 Bathing of the icons is a crucial part of the ritual of Nestinari, or firewalkers. On the feast day of Sts Constantine and Helena, the icons of the saints that are kept in a special chapel, are brought to a sacred spring, bathed, and their "clothes" (meaning cloth coverings) are changed with new ones. In the evening, Nestinari enter the embers, these icons in their hands, believing that they protect them from the fire. Firewalking is considered one of the most striking living remain from pagan times