"Todor Zhivkov, long-standing leader of Mother Bulgaria": this privately-funded billboard in Nesebar effortlessly reuses a cliché from the times of Communism and combines it with one belonging to modern nationalism

The factories worked and everyone had a job, there was no crime, the army was strong and every family had two-week holidays at the seaside: for a significant number of Bulgarians, Communism was a golden era of prosperity and security that outshone democracy, with its freedom of movement, speech and entrepreneurship. It is not only the generations who were young during Communism that feel this way. Many Bulgarians born too late to have first-hand experience of the regime share the same sentiment.

Longing for the imaginary golden past is not unique to Bulgarians. People across the East bloc bemoan the demise of Communism. In the former USSR, they miss their time as a superpower. In former Yugoslavia, they are nostalgic for the relative prosperity and the generally peaceful coexistence of the different nations. In the former East Germany, they miss (or used to miss) their mustard. Nostalgia like this existed as early as ancient Mesopotamia and Greece, and heavily influenced recent events such as Brexit and Donald Trump.

Nostalgia for Communism in Bulgaria, however, has its own peculiarities. It is not based on the longing for lost glory, power and international significance – Bulgarians have their mediaeval past to fill this need. Instead, they miss Communism because of its security.

Yes, between 1944 and 1989 people could not easily choose where they lived even in some regions in their own country. Travel abroad was difficult and required exit visas. Speaking out against the regime of comrades Georgi Dimitrov and Todor Zhivkov could have dire consequences, and elections were perfunctory. The general population had limited access to goods such as coffee, toilet paper, jeans, cars, more than two types of sausages and so on, but seen through the rose-tinted glasses of nostalgia, these were minor problems.

What mattered was the security. In the Communist society, you were pretty sure that your life would go according to an uninspiring, but secure plan: graduate from school and university, land a job that fits your qualifications, enjoy guaranteed maternity leave and free health care and, eventually, an early retirement with a small, but relatively adequate pension. Oh, and two weeks holiday at the seaside. It sounds like a lot when compared to the insecurity of the post-1989 times, when engineers suddenly found themselves redundant, factories and farms were closed and began to disintegrate, and hundreds of thousands of people were forced to emigrate and start their lives anew. Add to this the constant economic instability, the meagre pensions and the crumbling education and healthcare systems, not to mention the rapid rise of a few nouveau riches and the rapid impoverishment of hundreds of thousands. Add in the growth of petty and big-time crime, and you see why a number of people view Communism as something good.

The first signs of nostalgia for Communism appeared as soon as Communism collapsed. In 1990, the Bulgarian Socialist Party, heir of the Bulgarian Communist Party, won the first democratic elections in Bulgaria after 1944. The same year, the villagers of Gorna Kremena built a monument of Ivan "Gorunya" Todorov (1916-1965) with their own money. He was a native of the village, who later rose in the ranks of the Communist Party, but in 1964 hatched a plot to overthrow Todor Zhivkov, because... Zhivkov had parted with Stalinism.

As Bulgaria's economic troubles in the 1990s increased, so did nostalgia. The Bulgarian Socialist Party won the elections of 1995, and mass rallies in front of the former home of the party at Mount Buzludzha and the Red Army monument in Sofia marked the celebration of key days in Communist history. Nostalgia not only survived into the economic boom of the 2000s, when the general standard of living significantly improved, it also grew stronger, boosted by a new-found interest in Communist memorabilia and by a very popular TV ad campaign showing that the Communist lifestyle and sausages as equally as good as the present day ones.

When the world economic crisis of 2008 hit Bulgaria a year later, the subsequent privations only strengthened the nostalgia for Communism. Even the government joined in, and the then Prime Minister Boyko Borisov, who usually presents himself as being anti-Communist despite his long-time membership of the Communist Party pre-1989, declared that "we cannot even paint all that Todor Zhivkov built." The number of people taking part in commemorations of dates such as 9 September rose, with younger and younger participants, and the Internet was filled with nostalgic websites and Facebook groups sharing memories and photos from the period. 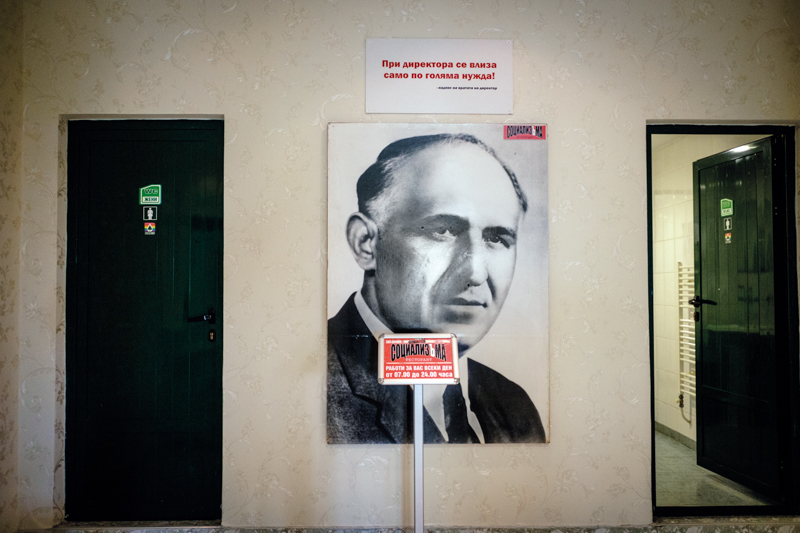 Communist-themed restaurant in Veliko Tarnovo. Establishments of this kind offer long menus with "specialities" from the era, but many are either staples of Bulgarian cuisine or new inventions. Before 1989 menus were usually limited to steaks, meatballs and skewers

Next, hipsterism appeared. The new generation of hip Bulgarians embraced what passed for vintage in their country – the material and non-material culture of Communism – and without giving it a second thought, turned it into a selling point. No one attempted to imitate the ugly soft hats, dresses and shoes from the 1950s (these were too ugly even for the hippest of hipsters), but a number of restaurants and bars appeared in the big cities, playfully decorated with five-pointed stars, cutlery from Communist factories and school canteens, the ubiquitous portraits of Communist leaders and other knick-knacks. Previously, Communist-themed decoration could only be found in small local cafes and taverns owned by elderly, embittered nostalgists.

A number of other enterprises cashed in and hyped up the longing for Communism, such as a popular "retro" museum located, ironically, in a flashy new mall in Varna.

The trend grew so strong that it went mainstream, broadcast by one of the main forces of the free market: the advertising business. Playing on the fears of Bulgarians that mass produced foods and drinks were not of good quality, the myth of the tasty, natural foods and beverages of Communism was revived in a number of successful ad campaigns. They firmly promoted and ruthlessly exploited the idea that the only difference between the democratic present and the Communist past was technology. Once we needed a whole day to get from Sofia to the Black Sea coast, and now we can do it in a couple of hours, one of these campaigns gleefully declared.

Unlike the other countries in the former East bloc, Communism in Bulgaria was overthrown not by a grass-roots democratic movement, but by high ranking Communists backed by the Soviets. After 1989, there was no serious attempt to hold to account those connected with the regime, and few, if any, of the top Communist leaders were successfully prosecuted. The lists of the agents of the former State Security remained secret for years. The Communist period is not covered in the school curriculum and Communist monuments are found all over the place. A series of democratic governments and parliaments have failed to provide a stable economic, judicial and political framework for the development of the country, resulting in widespread corruption which suffocates the freedom of initiative and the freedom of speech, and has led to the deep disappointment with democracy felt by hundreds of thousands of Bulgarians.

Consequently, in 2017, elderly Bulgarians long for their secure Communist past whilst their grandchildren think that the USSR was the same as the EU, while sipping their fashionable Rakiya cocktails in the latest Communist-themed bar in the city, and discussing with their friends their latest, exit visa-free trip to Amsterdam or Barcelona. 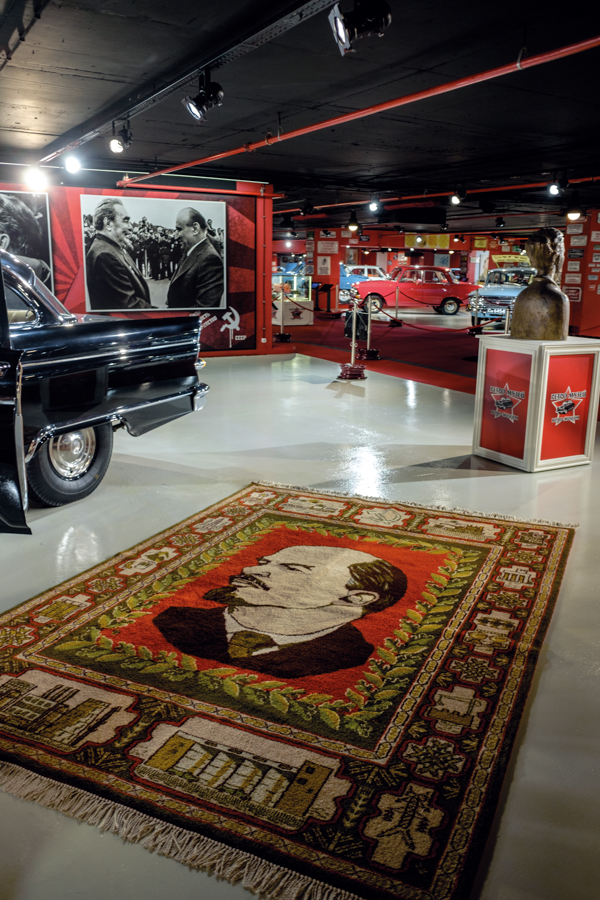 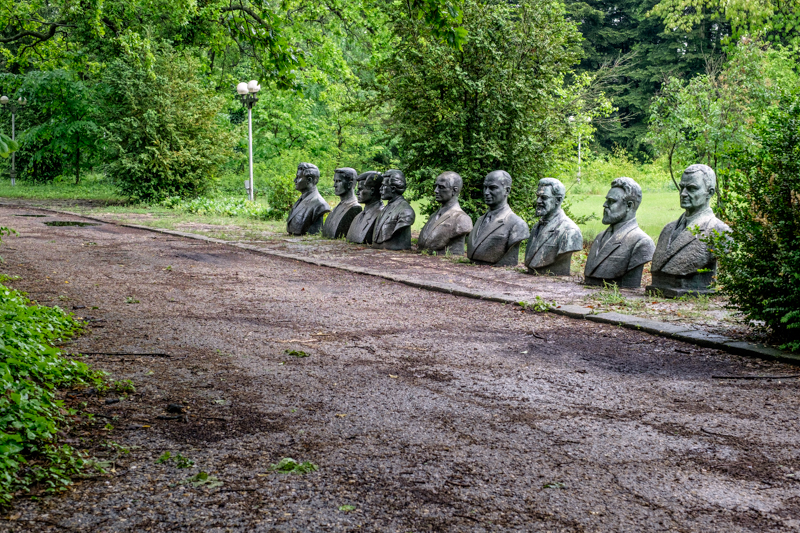 Tourist attraction: These  busts of Communist dignitaries used to stand in Varna until they were dismantled post-1989. In the 2000s an enthusiast rescued them and moved them to a former Zhivkov's hunting lodge near the town of Tervel that he had bought, restored and turned into a hotel 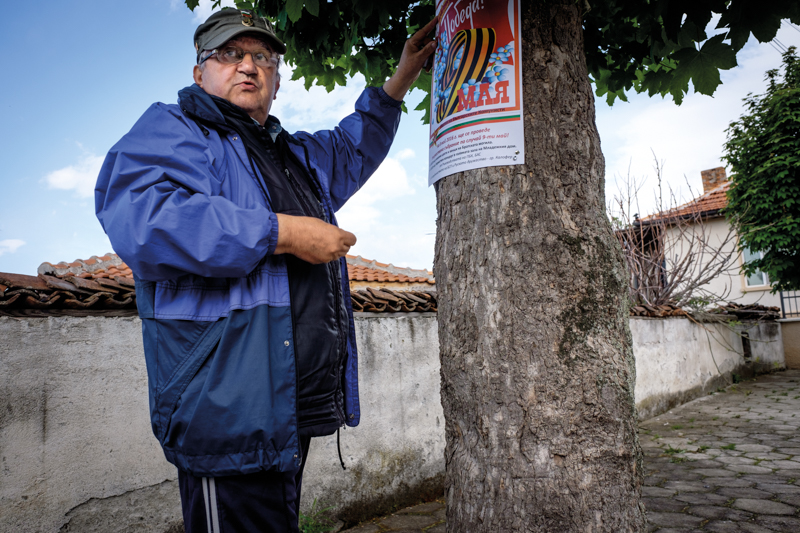 Kalofer, 2016. A man pins up a poster for 9 May, Victory Day – the celebration of the USSR's victory in the Second World War. 9 May is also Europe Day, but in Bulgaria the USSR-related activities are much more popular 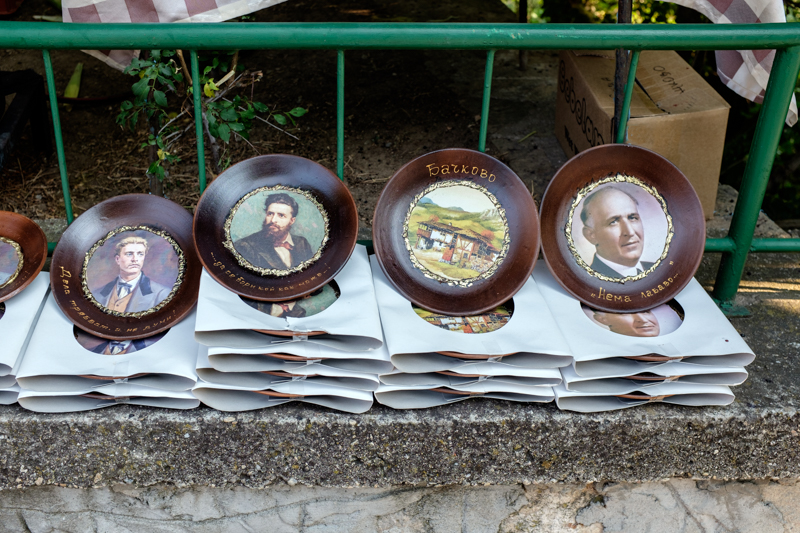 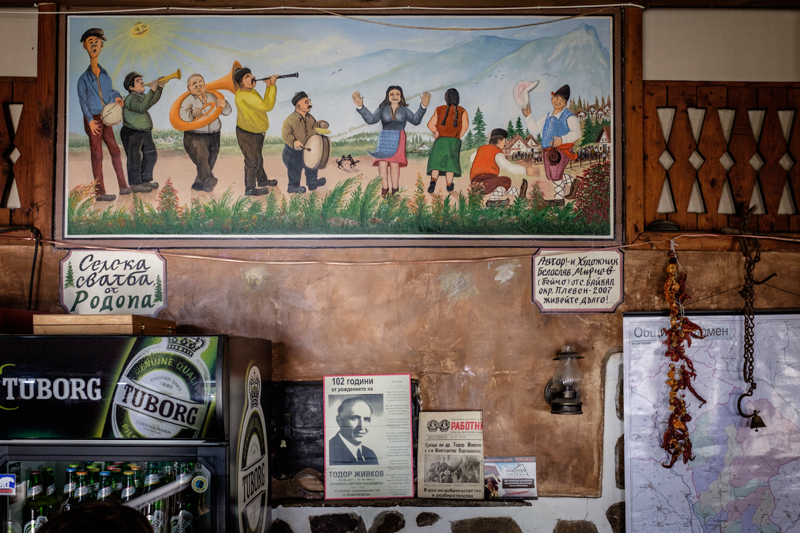 Mural and newspaper clippings in the tavern of Kovachevitsa village advertise Communism as an era when village life was nice and fun. In actual fact, the forced collectivisation of land in the late 1940s and the 1950s resulted in the depopulation of whole villages, including Kovachevitsa