FREE AS A BIRD | VAGABOND Skip to main content

FREE AS A BIRD

I meet Martin in a pub in the square of Sofia's Dragalevtsi suburb. The pub itself is not particularly striking but it's known as the meeting place of rock climbers and paragliding enthusiasts when they descend from Mount Vitosha on weekend afternoons. I usually go there because of the climbers, but today I am sitting at the pilots' table to learn about Martin's first flight. “What happened when you jumped?” I ask him. “You don't jump, you take off,” he quickly corrects me.

His first try was a tandem flight with an instructor. “If anyone tells you they are unafraid, they are lying. I was definitely frightened. First, the instructor tells you what you need to do and the safety rules. Then you have to run and take off at some point. Picking up speed was a bit difficult because the wing was pulling me back,” Martin explains. 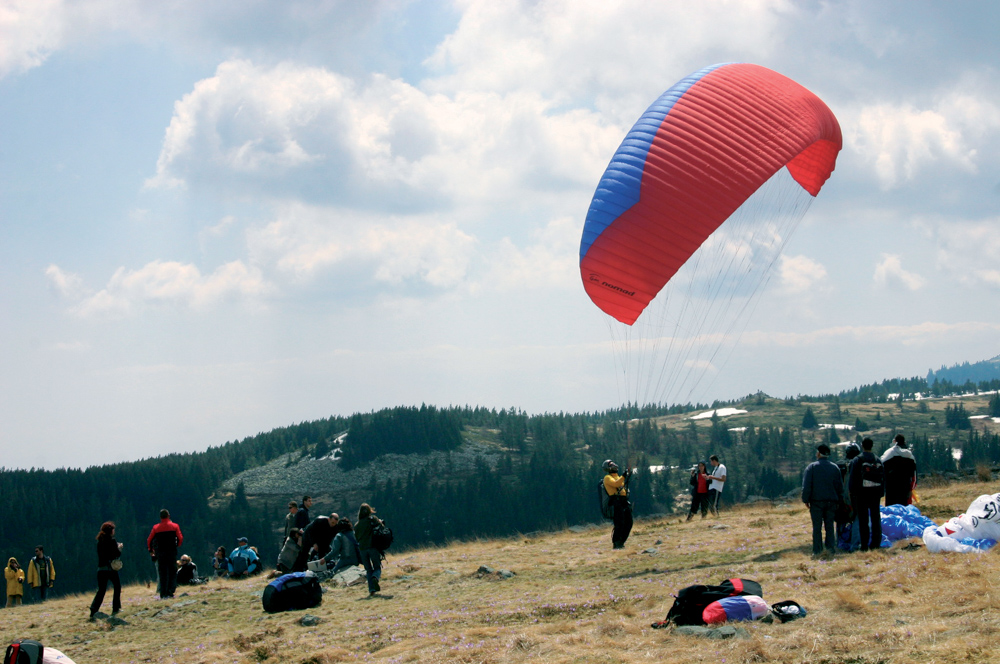 Unlike hang gliders, which have a rigid metal frame, the paraglider consists of an air-filled canopy, or the wing, as well as many ropes and risers on which the pilot is suspended within a harness. The entire pack weighs about 15 kg, or 33 lb, and is carried in a large tourist or special-purpose rucksack. In addition, pilots carry a reserve parachute on their backs. Paragliders may look different from each other in terms of kit, but they all adhere to the principles of unpowered flight. This may look easy from the ground but Martin says it's certainly not.

According to experts, the paraglider is a simple flying device and with proper tuition you can learn the basics of tandem flight – launching, turning and landing – in just an hour and a half. Still, actual paragliding is a different matter altogether. You need to make flight decisions on your own, which requires a longer training course embracing aerodynamics, meteorology and safety. Expert tuition safeguards against accidents. Initially, beginners perform their flights wing-bywing with their instructor and under his radio guidance. Only after this can they glide solo in the clouds. 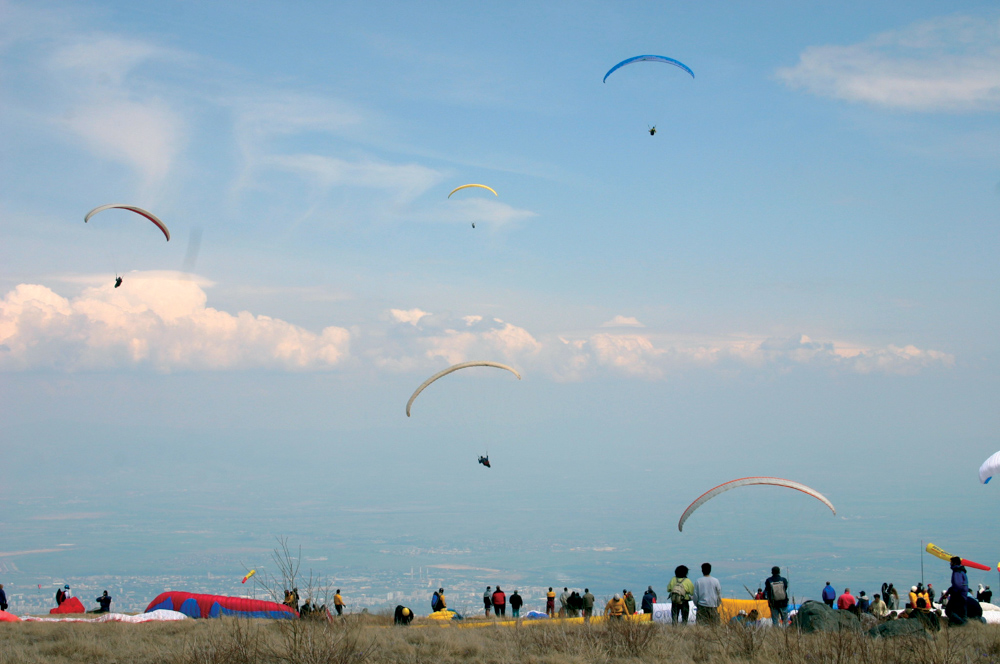 “I don't remember anything that happened in the first five minutes - I was paralysed! But then you relax and you feel so cool. At the end, you don't want to land. The higher you glide, the better – you have more time to make a decision and act,” says Martin, recalling his first flight. His highest altitude was 4,000 m, or 13,000 ft, above the ground.

Just like any other adventure sport, paragliding has its associated risks. According to some, the danger is about as great as it can get. To avoid it, you need proper and comprehensive training and competent guidance as well as impeccable safety equipment.

“Up there, time has its own rules,” Martin continues. “If you're on the ground, it all seems very slow, but it's not. Everything happens really quickly - you hear the wind swishing and you lose your senses. We flew for 40 minutes and I hardly felt the time pass.”

Paragliding is not a seasonal sport. It can be practised all year round, although it's almost entirely weather dependent. Flight restrictions exist over most cities and certain other sites. In Sofia, for example, you can't go beyond the ring road. But some claim they have landed in Borisovata Garden. 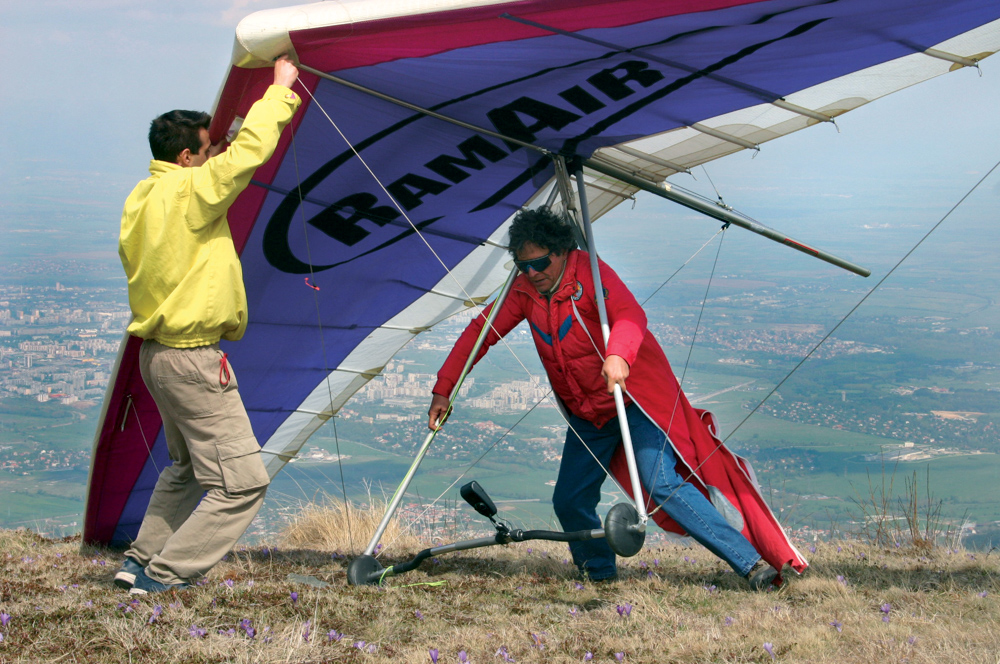 “When we landed, my legs were shaking, but it was incredible!” Martin concludes. He intends to do it again. Then he smiles and adds like an experienced airman: “There is always a man for a job, but not always good weather for flying. So work is for those who don't fly!” Then he orders another beer – because, as he says, the best thing about flying is the beer in Dragalevtsi square at the end and I don't see why I shouldn't believe him.

Facts
Sopot is considered to be the best paragliding zone in Bulgaria. You can reach the starting point by cable car in 40 minutes. The site provides numerous paragliding opportunities and some say you can see half the country while flying. Reznyovete, Kominite and Kamen Del in Mount Vitosha are the launching sites for paragliding in Sofia. There are starting points and good conditions for paragliding across the country, with Varna, Burgas and Albena along the Black Sea Coast being particularly enthralling. In Bulgaria, a new paraglider will cost you around 2,000 euros. A tandem flight for beginners is about 40 euros and a beginner's course costs about 200 euros. 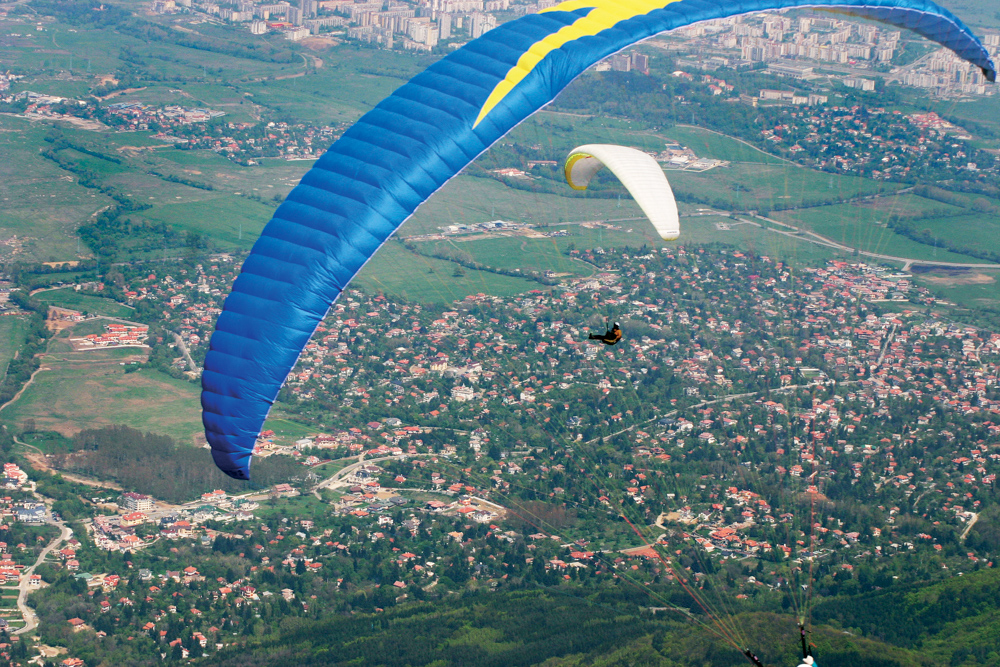