A GHOST OF SOFIA'S PAST | VAGABOND Skip to main content

A GHOST OF SOFIA'S PAST

The Water Tower of Lozenets belongs to another era patiencetips

The capital gets its steady share of visitors all year round, drawn to the cluster of attractions in the centre with the shiny domes of Alexandr Nevskiy cathedral, the ancient rotunda of St George and the surrounding shopping streets. Those of a more curious disposition venture to Boyana Church and the National History Museum, and maybe wrap up the tour with a cable car ride to Cherni vrah peak.

But if you are prepared to explore off the beaten track, you may discover hidden gems that even the locals know little about – such as the Lozenets Water Tower.

At first sight the Water Tower looks incongruous, surrounded as it is by the peaceful, everyday atmosphere of the Lozenets neighbourhood. The tall, brooding structure, wrapped in vines, stands in its small green square among the residential buildings. It is a remnant from another Sofia – one that flourished eighty years ago.

Back when it became the capital after Bulgaria's liberation from Ottoman rule in 1878, Sofia didn't have the infrastructure of a major city. Its motto "Grows but Does Not Age" proved to be all too true, though, at least at first. By the 1920s the population had increased ten-fold to 200,000 and the sprawling city was in desperate need of a water project sufficiently large to supply all the citizens. The task fell to hydro-engineer Ivan Ivanov, who was deputy head of the water supply department of Sofia. The idea of supplying Sofia with the clear water from the Rila mountains was discussed as early as 1918, but implementing the general plan for the water supply had to wait until 1923. The final plan incorporated changes in the supply as well as its dispersion within the city to accommodate the needs of the new metropolis. 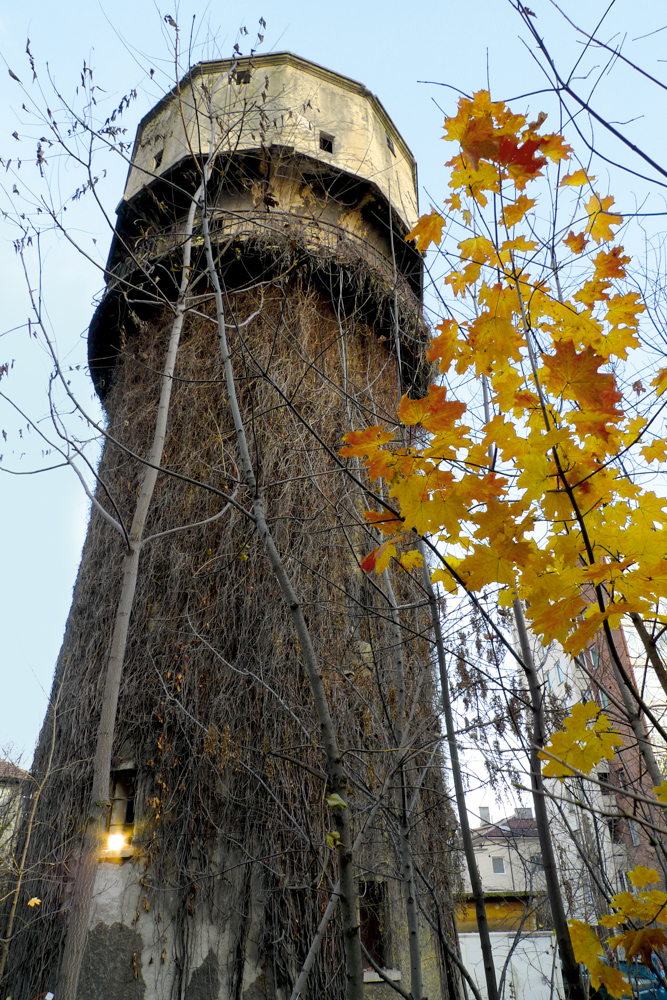 Until 1926, when the first part of the Rila water system was completed, all of Sofia's water came from Vitosha mountain. Both the earlier and the later systems relied on gravitation for the flow of water to the buildings, but the neighbourhood of Lozenets represented a real problem. At 610 metres, the hill here is one of the highest points in Sofia, and in the 1920s it was already populated with two- or three-storied houses. Sofia's engineers, headed by Ivan Ivanov, decided on a practical solution – build a water tower.

The design of the Lozenets Water Tower was Austrian, but construction drew on the French tradition of water tower building, using reinforced concrete and bricks. Building the 27-metre tower took a little more than a year – from 20 September 1928 to 20 November 1929. The operating premise was simple enough. A pump moved water from the reservoir at the Sofia Seminary to the storage tank at the top of the tower, which was 15 metres higher than the highest land point. The tank had a capacity of only 100 cubic metres, but it was not intended for long-term storage. Instead, it would service houses during the high-demand period of the day and the pump would fill it up again during the night.

Today the tower looks much the same as the day it was built, though it is lacking its storage tank. A staircase around the hollow interior takes you to the third floor, where you can get out onto the narrow balcony that runs all the way round. Braver souls could tackle the vertiginous winding steps that lead one floor up, to the space under the dome where the tank was mounted. If you crave the extreme experience take the short iron ladder which brings you still further up, to the top windows under the roof.

You will be lucky if you get to see all this, as the tower has long become obsolete and it is not open to visitors. It has been many years since anyone lived in the low building next to it intended for the guards. The high balcony no longer even serves as a vantage point from which to survey the surroundings, as was the architect's idea, because the apartment blocks around it, built during Bulgaria's Communist period, obstruct the view.

For many years it seemed that the Water Tower would fall into disrepair and neglect, along with other emblematic buildings in Sofia. But light at the end of the tunnel appeared in the form of the non-governmental organisation IME, or Name, which has brought abandoned city spaces back to life through art festivals and exhibitions. IME started the tradition of the Water Tower Festival in 2006 and has continued it for four successful seasons. Each year residents of the Lozenets neighbourhood and other Sofianites gathered to clean the surrounding area, enjoy alternative art events, listen to music and take part in workshops. Since 2008 the tower has also doubled as a gallery for events like the Urban Guardian Angels festival, celebrating the day of Sofia, and Dutch art exhibitions, while the interior provided the perfect setting for the European Bat Night in 2009.

The future of the Water Tower among Sofia's cultural heritage buildings is far from certain. In October 2010 the municipality of Lozenets organised an exhibition of architectural projects that presented ideas for transforming the tower, but its permanent transformation into an arts centre – a personal project of the mayor of Lozenets – will have to wait, as there is a serious problem to solve before any of the proposals can get underway. It seems the Water Tower does not exist on paper and there are no documents to prove who owns it. Since it is a water structure, it's still a part of Sofia's water supply system – despite having been being out of operation for decades.