This would have been the perfect story for Andy Borowitz. A group of people identifying themselves as intellectuals start a war of words (involving so far just one non-verbal Molotov cocktail) over another group of people whom the intellectuals dub uncouth simpletons with fascist or Taliban tendencies over a monument no one has ever liked and everyone, including the engineers, agrees is actually dangerous not only to your sight and mind but also to your head in case you happen to be walking too close by. I could almost see Borowitz putting pen to paper (or fingertips to the keyboard, whichever saying is more in circulation these days) and starting to philosophise over the irritatingly impossible task of explaining things to idiots - particularly when the things in question are so painfully obvious.

But this is not New York, Bulgaria has no one remotely reminiscent of Andy Borowitz and nothing near the magazine he works for. Significantly, Bulgarians have to explain to idiots that white is white (as the Bulgarian saying goes) on a daily basis, sometimes several times a day.

What prompted the current round of accusations, counteraccusations, the Molotov cocktail (which destroyed a crane allegedly costing 1 million leva) and several tons of e-newsprint is the fate of the strange disintegrating thing in front of the NDK that everyone's seen and no one's understood for the past 36 years. It is officially called 1,300 Years of Bulgaria, was produced by a famous Bulgarian sculptor called Valentin Starchev, who had close links with the Bulgarian Communist Party because because no one in those days could get commissions like that without having good links with the Bulgarian Communist Party. More on the monument, its evolution and the things it tried to tell here.

The Sofia City Council made a decision to knock down the 1,300 Years of Bulgaria back in the early 2000s, for safety reasons, but no one bothered to implement it. Few people at the time, including those now identifying themselves as intellectuals, bothered to even voice an opinion.

Things have changed. Theoretically, Bulgarians live in 2017 and next year they are about to take over the EU rotating presidency for the first time in their lives. If the war of words being fought between the "intellectuals" and the "Talibans" is anything to go by, GERB's Bulgaria has been furled into a time warp more befitting the 1950s than the present time. The same people who never lifted a finger to do  anything to make the 1,300 Years of Bulgaria at least a bit safer for the walking public are now up in arms, crying bloody murder.

The "murderers" have equally preposterous arguments. They say they will "restore" an old monument to Bulgaria's dead in the Balkan Wars and the First World War which used to stand near the site of 1,300 Years of Bulgaria and which was hastily knocked down when the BKP decided to place the other one on its site.

The pros and cons of knocking down public monuments or "restoring" ones already destroyed are entirely beside the point. That debate, if any, should belong to the history books rather than the Internet sites. The real issue is elsewhere.

Absurd as it may seem, the 1,300 Years of Bulgaria controversy actually plays quite well for the current rulers headed by strongman Boyko Borisov and his ultranationalist pals. Any public argument which takes up both time and energy is quite welcome as it deffects the attention of the citizens from what is really important. Bulgarians have had quite a nasty experience with that, especially under GERB. They should by now know better. But, alas, as the current "intellectuals" versus "fascists" debate exemplifies, having to explain obvious things to idiots will likely continue for a long time to come. 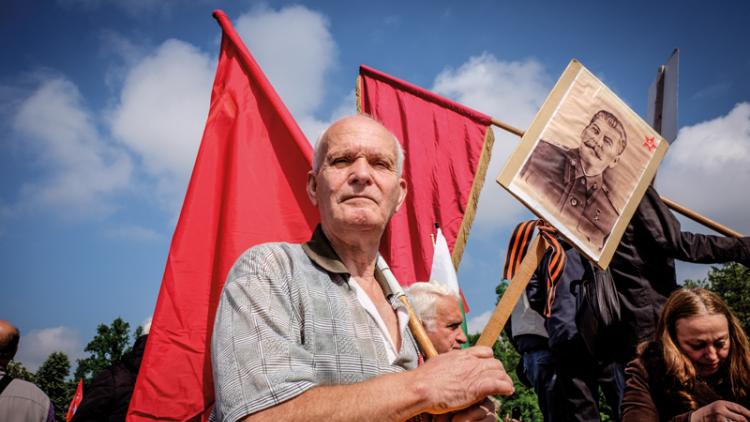