GUESS WHO'S PHONING ME?

A woman cleaner at Sofia Airport, pictured above but only partially seen as she appears to be hiding behind a bunch of flowers, announced on her Facebook page, in a state of sheer amazement and exaltation, that she had received a phone call from no one lesser than Prime Minister Boyko Borisov. 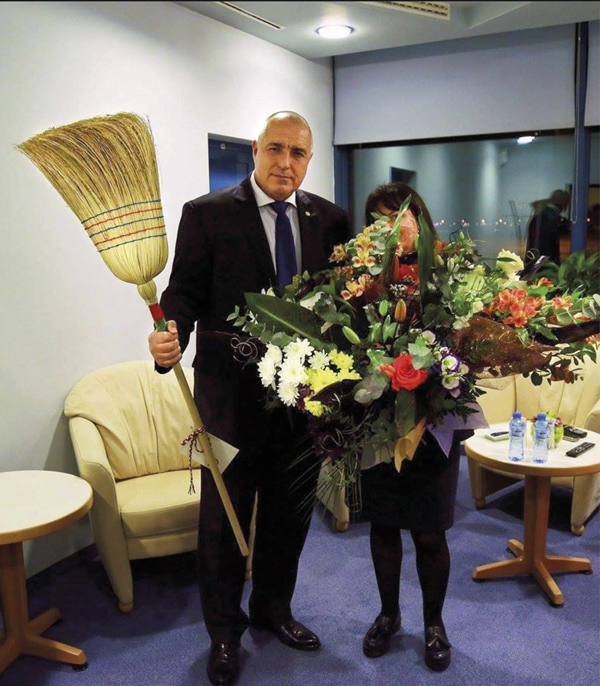 During the call, he relayed to her he was cancelling a 13 million leva cleaning and maintenance contract concluded by the airport and an independent firm. Under the contract, the staff cleaners would have been laid off and keeping the corridors and bathrooms of Bulgaria's biggest airport in order was to be given to a company the prime minister now considered dubious.
The move was one in a series of cancellations of public contracts the Bulgarian prime minister started announcing after a public relations fiasco in London where he appeared at least sheepish whilst having to answer undoctored questions by Bulgarian expats.
There is no particular reason for the cancellations except that the prime minister, whose job normally is not to interfere with contracts concluded under the Public Works and Contracts Act, had heard that there were "rumours" that the contracts had not been very transparent. In all likelihood, the cancellations will prompt legal suits in which, if the affected win, the Bulgarian taxpayers will have to pay huge amounts of cash in damages.
The woman cleaner and her colleagues waited for the prime minister to return from Brussels and presented him with... a broom – a gift to be used by him to "sweep away all corruption in Bulgaria."
In a statement published on his personal Facebook page, from which the photograph above was taken, Boyko Borisov, who was Bulgaria's top policeman in 2001-2005, then mayor of Sofia in 2005-2009, and then prime minister since 2009, with a short interruption in 2013, vowed he would, whatever it took.