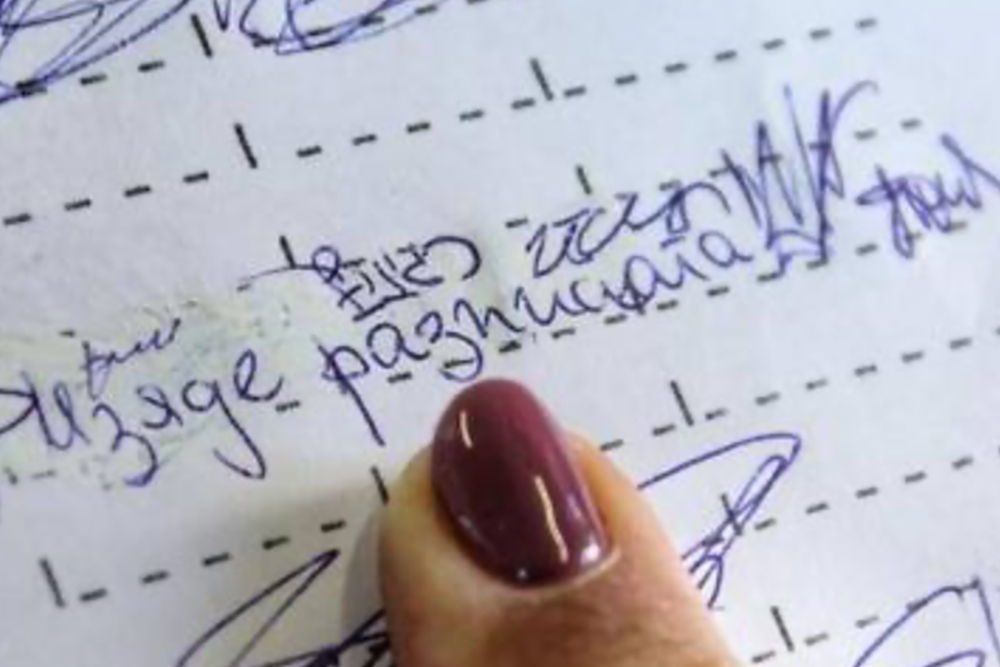 "She ate up her receipt"

Ahead of the 14 November general election some parties – notably the DB, or Democratic Bulgaria, and the ITN, or There Is Such a People party – insisted on taking away the good old-fashioned paper election ballots that you had to use a pen to put a cross against your preferred candidate on, and substitute them with "election machines": small and not-very-difficult-to-operate contraptions where you press a series of buttons and then the thing spews out a supermarket-style receipt which you have to fold and put in a ballot box. Those demanding the switch to machine voting said machines rather than humans were better at election fraud prevention.

A few hours before election day the Central Election Commission, the body that organises and supervises elections in this country, came out with a surprise addition to the election rules. All voting machine receipts had to be counted by hand, an extra measure designed to prevent fraud, the CEC said.

Few countries in the world use such a ballot casting system for general elections. Most developed democracies continue with the tried-and-tested paper-and-pen ballots.

The devil, as so often happens in Bulgaria, is in the details. Whoever devised the election machines may have had different ideas in mind, but what happened in actual fact on 14 November is that voters were confronted with an intro screen where they had to choose between 1/ Voting for parliament and president; 2/ Voting just for parliament; and 3/ Voting just for president. Once you pressed one of those buttons and confirmed there was no way to go back. It was like sending an email that you could not unsend.

Most people had no trouble with the system, but some did. A woman supposed to vote at the French language school in central Sofia messed things up severely. After going through the voting machine procedure she discovered she had pressed the wrong buttons and demanded to vote again. No way, the election observers present in the room said. Then the woman took her ID card (the guards are supposed to keep your ID card during the voting procedure as yet another security measure to prevent a person voting twice), and ran to the stairs. She had her voting receipt with her.

The guards chased her. An argument ensued. I want to vote again, the woman demanded. You can't – and you have to give us the receipt because we have to put it in a list of receipts, the guards responded.

Then the woman resorted to the unusual measure of ... swallowing the receipt.

The guards were at a loss. They had not dealt with a voter eating ballot papers before. They didn't know what to do. They had not been given instructions for such cases. On the one hand it was obvious that the receipt could not be retrieved from the woman's stomach – presumably not by the end of election day. On the other hand the guards would be in trouble if the number of the receipts didn't add up.

So, imaginatively, the guards put down a not very orthodox sentence in their election list: "She ate up her receipt."

From the standpoint of Bulgarian election bureaucracy that was enough.

HYPOCRISY AD INFINITUM
The video, shot in the National Assembly, shows an young MP for the ruling Changes Continued political party who takes up the rostrum to make a statement to the house and then... forgets what he was about to do.
OF PIGEONS AND VACCINATIONS
In the neighbourhood, I asked a retired woman, who habitually makes a public nuisance by throwing bread crumbs out of her fourth-floor balcony to feed Sofia's uncontrolled population of pigeons, to stop doing that because a uncontrolled population of pigeon