FOR A COUPLE OF SALAMI MERMAIDS

A scandal in GERB's Bulgaria usually lasts for a couple of days as it is superseded by the next scandal to keep the public busy and thinking about things other than the politics and the problems of the day. One scandal in November, however, lasted well over a week. 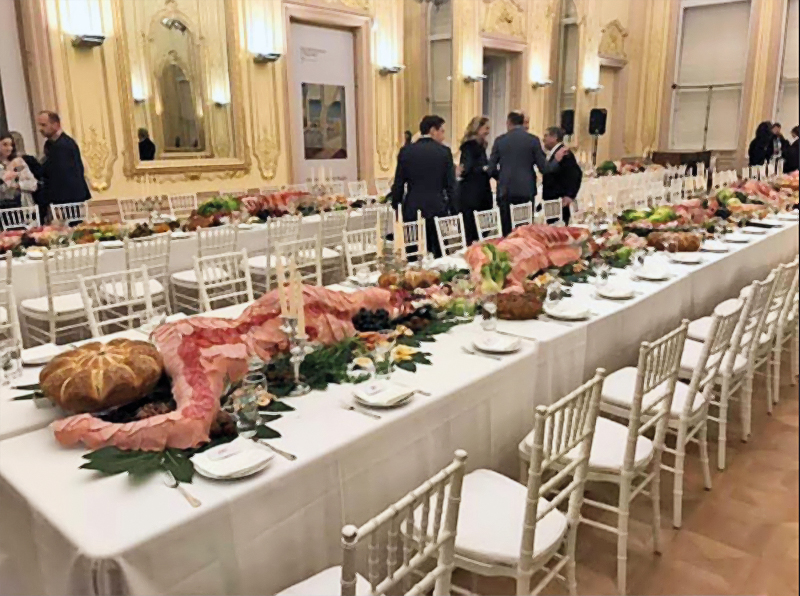 Interestingly, it did not involve some high-profile entrepreneur who was arrested over allegations that will probably not hold water in court or some fragile woman who gets chained by the Bulgarian police. It involved… modern art.

Or, rather, the cocktail party that followed a modern art exhibition.

The generator of this was Oda Jaune, whose real name is Mihaela Danovska, a Bulgarian artist born in 1979. In 1998-2003 she studied in Dusseldorf under Jorg Immendorff, the German painter, sculptor, educator and member of the art movement Neue Wilde. Danovska married Immendorff and went on to a brilliant art career. She won the Pierre Cardin Best Painter Prize in 2012 and has had numerous exhibitions in Germany, Italy, France and elsewhere.

Following her exhibition at the National Gallery in Sofia, the organisers set up a cocktail party where the food, mainly salami and cheese, was arranged as a… reclining mermaid. The local art crowd was in attendance, but no press was invited. Snapshots of the "salami mermaid" leaked out, and all hell broke loose.

Known and unknown hacks put pen to paper to produce hundreds of vitriolic commentaries on how could those privileged enough to be invited to a party like that eat and drink while mothers of disabled children protested outside for better conditions. How could the National Art Gallery provide its rooms to a debauchery? Was this not a major provocation against Bulgaria's national decorum and even security? How, why, who paid for it, who was responsible, who is to be crucified etc etc – enhanced by the social media networks, the newspaper commentaries snowballed and threatened to become a full-scale street protest, probably the first one in Bulgaria on an arts issue.

Still, this was not the first time when food created a scandal in latterday Bulgaria. In the late 2000s then President Georgi Parvanov, who is not a modern artist, treated his guests on 3 March, Bulgaria's National Day, to a cake decorated with sugarcoated figurines of… Bulgarian resistance soldiers fighting the Ottomans, in 1877-1878. There was some limited criticism at the time, but nothing compared to Oda Jaune.