Mighty stone arches loom over a tiny river, the moist air hangs over misty greenery, and the flutter of wild birds' wings is amplified in the dark caves; the atmosphere of Bozhi Most, or God's Bridge, is as intriguing as its mysterious name. 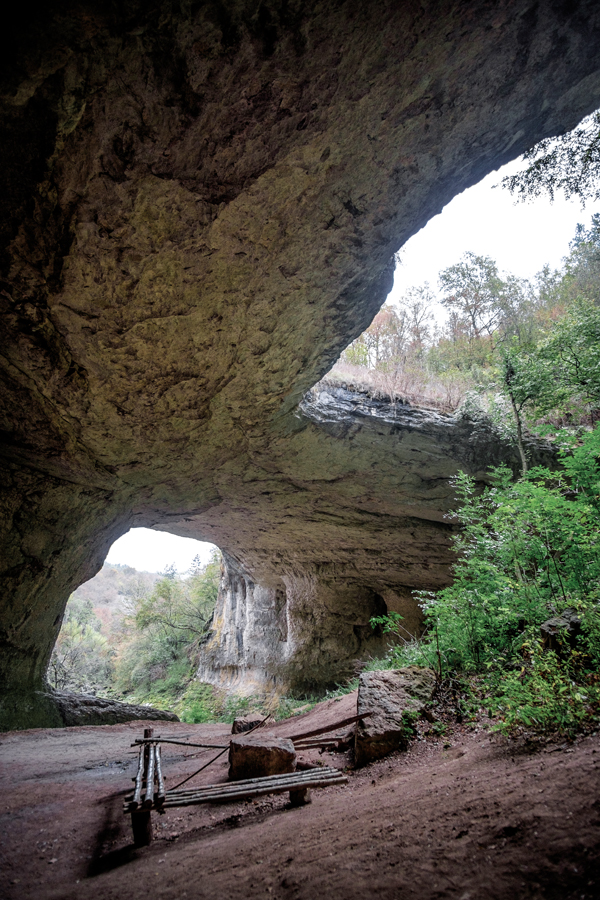 It is easy to see why people gave such a name to the two stone arches spanning the small brook, and the series of caves near Vratsa. Even when you know in advance that the main stone arch is 20m high, 25m wide and 125m long, you only appreciate the magnitude of the place when you see it with your own eyes.

Perceiving divine intervention in the creation of such a place seems logical. Strangely, the legends about God's Bridge are fewer than one might expect. One attributes the "bridge" to a god – or gods, depending on which version you happen to read on the Internet – who for some reason spanned the narrow gorge of the brook, using only the power of his (or their) will. Another story, which is most probably part of the lore of small - time treasure hunters, claims that King Konstantin and Queen Elena (yes, they meant Roman Emperor Constantine the Great and his mother) used to live in the caves by the stone arches. Queen Elena might have been an empress, but she was also a hardworking woman and was constantly weaving on her loom of gold. The loom is still there, the legend says, hidden in the caves.

The true story of how the God's Bridge natural phenomenon formed is much more interesting.

About 120 million years ago, while dinosaurs were still a novelty, a shallow ocean existed there. Gradually, residues, including the bodies of dead sea creatures, began to accumulate on its floor. Prehistoric plankton, mussels, snails, sea urchins, brachiopods, and ammonites fell to the bottom, and time, increasing pressure and rising temperatures turned them into limestone. These rocks remained hidden underground for millennia, while dinosaurs died out, and mammals and birds took over the Earth.

An underground river started flowing through the soft rocks, carving them into a series of caves. At a point in time so close to ours that geologists call it "recent past," the roof of some of the caves collapsed. The underground river – the modern Lilyashka Bara brook – now flowed overground, and erosion acted on the now exposed former caves, carving them into the mighty arches you see today.

Bats, owls, and crows soon moved into the new habitat, and are still here.

Whether early humans also settled there is not clear. The brook frequently produces flash floods, and this could have discouraged settlers. In Antiquity, the Romans built a fortification on one of the banks, metres away from the stone arches. Its task was probably to secure the passage through the stone bridge, which was used by local traffic.

The modern visitor has two options for reaching Bozhi Most. One is to go to Lilyache village and take the signposted eco trail towards the location, which is sometimes confusingly written in plural as Bozhite Mostove, or God's Bridges.

Another way is to leave Vratsa on Route 15 to Oryahovo, take the turn to Chiren village, and before reaching Chiren take the left turn that is clearly signposted as leading to Bozhi Most. When the road forks again, take the right and after a pleasant drive through some forest you will end up in front of the fortification. This route will spare you some walking.