The best of Balkan madness, with all its unapologetic joie de vivre, can be experienced at a certain location at a certain time: the Guča Trumpet Festival in August, and this is not just because of the official ritual of waking up all the revellers at 7am sharp with a blast of enthusiastic live trumpet music.

At the Guča Trumpet Festival, exaggeration is the norm. Every August this sleepy town in southern Serbia attracts thousands of people from all over the Balkans – and increasingly beyond – for several days of traditional brass music unleashed by dozens of bands, large and small, of dancing and singing, of overeating and overdrinking, of behaving as if there is no tomorrow, when life is to be lived to the full.

The Guča Trumpet Festival is not just a venue to enjoy music, although it has its fair share of competitions, concerts, exhibitions, and other cultural events. This festival, which starts at the statue of a trumpeter – the most popular photo-opportunity here – is a celebration of a whole lifestyle; unrefined, yet genuine and embracing life's worldly pleasures.

For outsiders unfamiliar with Balkan brass music, the music here consists of endless repetitions of Goran Bregović songs "Mesečina," or "Moon," and "Kalashnikov," or "AK-47," that both achieved international fame in Emir Kusturica's movie Underground (1995).

The universe of Balkan brass music, particularly in Serbia, however, is much more extensive. Its traditions here date back to 1831, when King Miloš Obrenović created the first military band in Serbia. Brass instruments replaced traditional wooden ones, and melodies changed accordingly, combining vivid local rhythms with the new sound. The role of music in local communities remained the same, accompanying all the important events in life – from baptism to military service, to marriage and, ultimately, to the grave. Bands of professional musicians formed, many of them Gypsies. 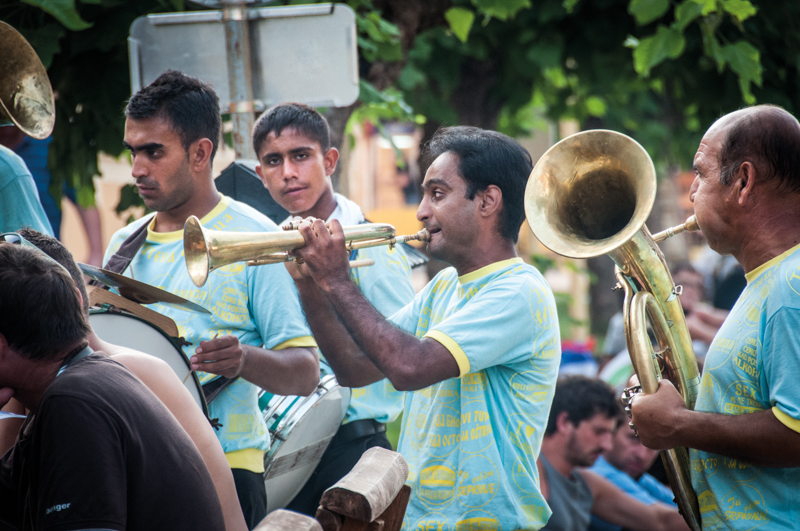 Dozens of local brass bands attend the Guča festival, lured not by the fierce competition, but by the prospect of making good money playing to revellers

Southern Serbia is a region with a particularly strong tradition of brass music.

The first festival, in 1961, was a small affair attracting a humble number of participants. Its allure soon grew stronger, though, eventually attracting the attention of Miles Davis himself. He visited. He listened. Reportedly, he commented: "I didn't know you could play the trumpet that way." Whether this was a compliment or not is not clear, but today's visitor will agree on the uniqueness of Guča, whose fame has spread all around the world via social media in the digital age.

No video or Instagram post, however, can prepare you for the organised chaos of Guča in the days of the festival. The whole town is a stage. Wandering brass bands parade the streets, blasting out their tunes, advertising their talents in a delightful cacophony. Swarms of revellers, many of them huge groups of Serbs and other Balkan nationalities, fill the tables in the makeshift taverns that take up every free space around. From time to time, the diners stop a band of musicians, and demand their favourite song and, while the music blasts out even louder, they sing and dance, often on the tables. When the song is over, the procedure is repeated with another one, and then another, and another, until the revellers grow tired, and pay the sweating musicians. Then the diners go back to their seats, and the musicians continue on their way, looking for the next table of friends ready to hear "Kalashnikov" for the umpteenth time. 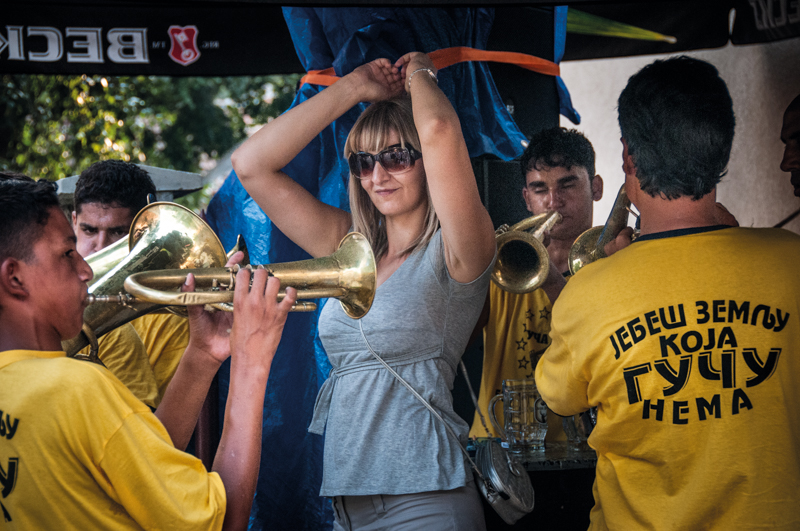 "F*ck any country which doesn't have a Guča!," says the T-shirts of this brass band

All of this happens simultaneously, all over the place, over the course of several days.

Silence does not exist at the Guča Trumpet Festival.

The event does not only have its own sound, it has its own taste, too. The taverns offer the ubiquitous and tasty Serbian grills, while on open fires – in the August heat – whole lambs and piglets are spit roasted. Svadbarski kupus, or Wedding Sauerkraut,  simmers over the embers in earthenware pots big enough to fit a grown child. Svadbarski kupus is huge in this region – some of the chefs advertise themselves as being  winners of competitions for the best sauerkraut.

As at all events of this sort, the Guča Festival comes with dozens of stalls for cheap entertainment and souvenirs, including Guča-themed T-shirts and knick-knacks with slogans such as: "F*ck any country which doesn't have a Guča!".

"I didn't know you could play the trumpet that way," Miles Davis said after visiting the Guča festival

The event, however, has darker moments and by this we don't mean only the results of alcohol abuse. Some revellers openly demonstrate aggressive nationalism, while underage Gypsy girls, often well below 10, wander around in cheap belly dancing costumes. If you pay them, they will dance the belly dance for you, a disturbing sight some revellers seem to enjoy.

The Guča Trumpet Festival might be a celebration of Balkan madness, but it is well organised. Camping facilities are provided. Streets are swept clean each morning. The popularity of the event means that you might have difficulties finding a place to crash if you do not book in advance, but staying somewhere outside Guča is an option. The only problem with such an arrangement is restricting your alcohol intake in the evening, as the traffic police check cars leaving the festival area, and you will definitely miss out on those trumpet wake up calls at 7am.

The 57th Guča Trumpet Festival is on 9-13 August 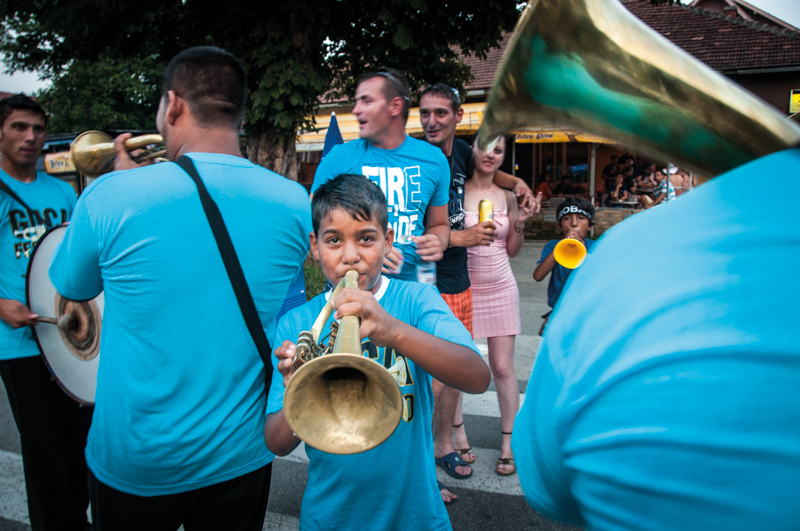 Dancing on the streets all day long – and a good part of the night, too - is an essential part of Guča's fun 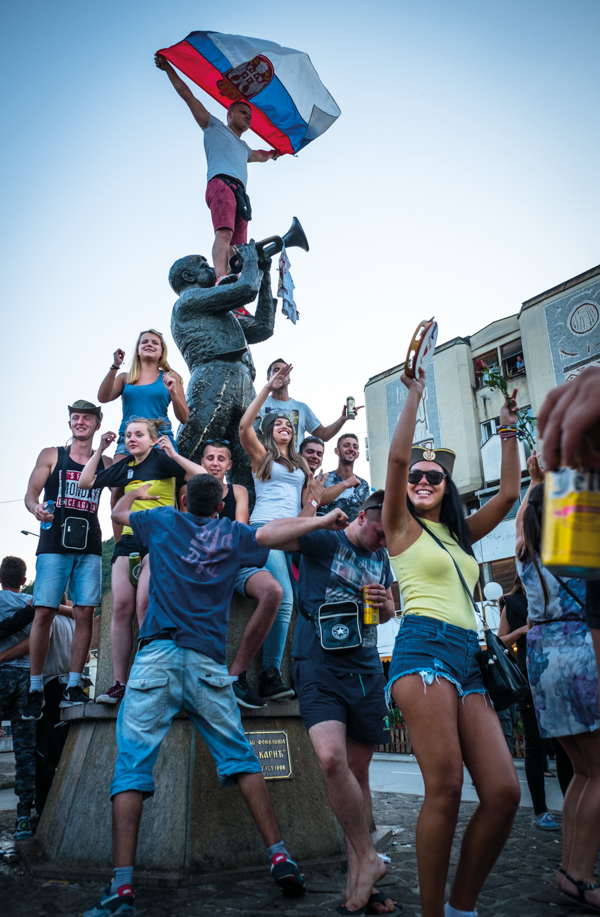