In 1877, during the Russo-Turkish War, local citizens took refuge in St Nicholas Church but were massacred by Ottoman irregulars

Karlovo is one of those places where size does not equal importance. Tucked between the Stara Planina and the Sredna Gora mountain ranges looks fairly unimpressive now, but in the 19th and early 20th centuries it produced a disproportionate number of men and women who influenced this nation's history.

These included, but were not limited to, educators and wealthy merchants, benefactors and actors, artists and revolutionaries, arguably the first Bulgarian female adventurer, Anka Lambreva, who travelled round the world, and the two brothers, Evlogi and Hristo Georgievi, who sponsored the construction of Sofia University.

However, most Bulgarians associate Karlovo with one particular person. Vasil Kunchev, commonly known as Levski, meaning Lion, was born in Karlovo in 1837. He took his monastic vows there, in 1858, but left soon afterwards and became a revolutionary with an unmatched talent to incite rebellion against the Ottomans.

The reasons why relatively small Karlovo produced so many impressive personalities were mainly economic. At present, the town is hardly a powerhouse, but back in the day it was a centre of textile manufacturing and rose oil production. This resulted in a lively community whose members travelled far and wide. After Bulgaria's liberation, when the Ottoman markets were lost and local manufacturing was replaced by cheaper industrial production, Karlovo started to lose its importance.

Today Karlovo is quiet, but the inquisitive visitor can find some rewarding curiosities and delights in and around it. 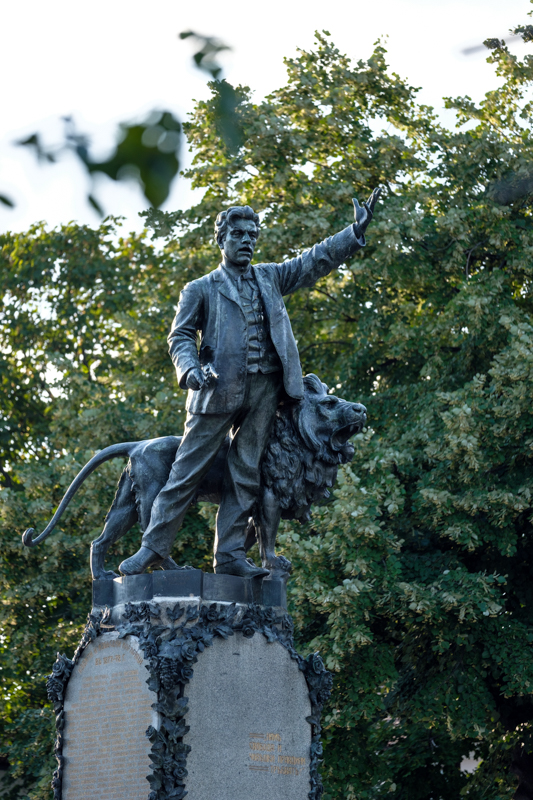 The lion next to Vasil Levski symbolises the Bulgarian nation

The house and museum of Vasil Levski is the obvious focus of interest. A tiny and rather austere place, the 19th century house is a place of pilgrimage for modern Bulgarians where school children from all over the land are taken on bus trips.

Unless you stray off the main street and drive a couple of blocks south you might miss Levski's monument. Erected in 1907, Levski stands proud, a lion by his side: an excellent rendition of the 19th century man that by far outshines many modern attempts at heroic sculpture.

Two churches nearby are easily recognisable by their Baroque-inspired belfries. By the northern wall of St Nicholas, built in 1847, there is a small grave where Gina Kuncheva, Levski's mother, was interred. On the other side of the church a milestone claims to mark the geographical centre of Bulgaria. In actual fact, the geographical centre of Bulgaria is on the northern side of the Stara Planina, in the area of Uzana, near Gabrovo.

The Holy Mother of God Church (1858) stands where an older church, which was destroyed by fire, used to be located. Its marble floor is decorated with a relief of a two-headed eagle, the symbol of the Constantinople Patriarchate. It indicates the subservience to Constantinople of the church and its parish at the time the church was erected. A mural of Vasil Levski is depicted inside. There have been several efforts to canonise him as a saint, but so far they have been turned down by the Orthodox Church.

Karlovo has also preserved some remnants of its earlier history. The town appeared in the late 15th century, when the area was given to a high-ranking Ottoman official, Karlizade Bey, for his personal use. Gradually, his name was transferred to the settlement itself. In the centre of Karlovo there remains a beautifully painted mosque dating from those times.

A short walk from the centre of Karlovo cascades one of Bulgaria's most delightful waterfalls. Both its names, Suchurum or Karlovsko Praskalo, are tongue twisters, but you can just ask around for the waterfall, and you will be understood. It falls from eight metres through massive boulders and has been a favourite spot for picnics and walks for generations of locals. In 1926 a small power plant was built at the foot of the waterfall, and inaugurated in the presence of King Boris III. It still operates today, its original Made-in-Germany turbines still doing their job.

Karlovo also has an Ottoman-era caravanserai, which is now a hotel. 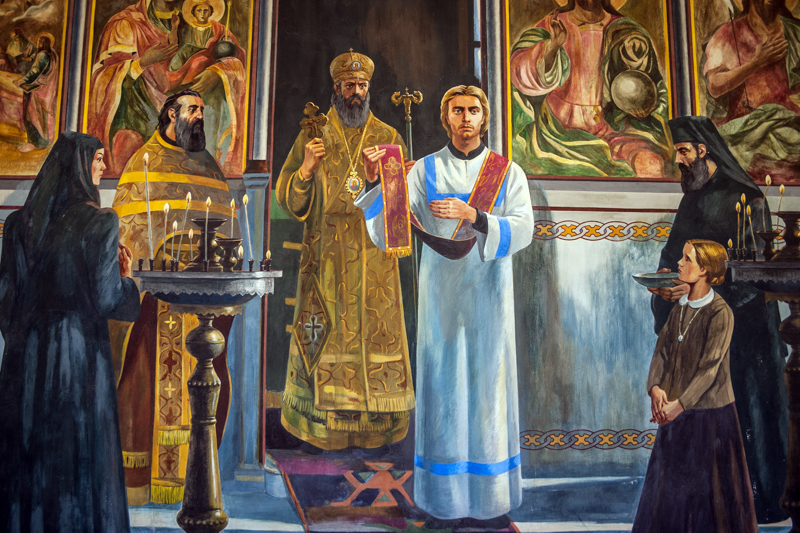 A mural of Vasil Levski in The Holy Mother of God Church in Karlovo. There have been several efforts to beatify him, but they have been turned down by the Orthodox Church 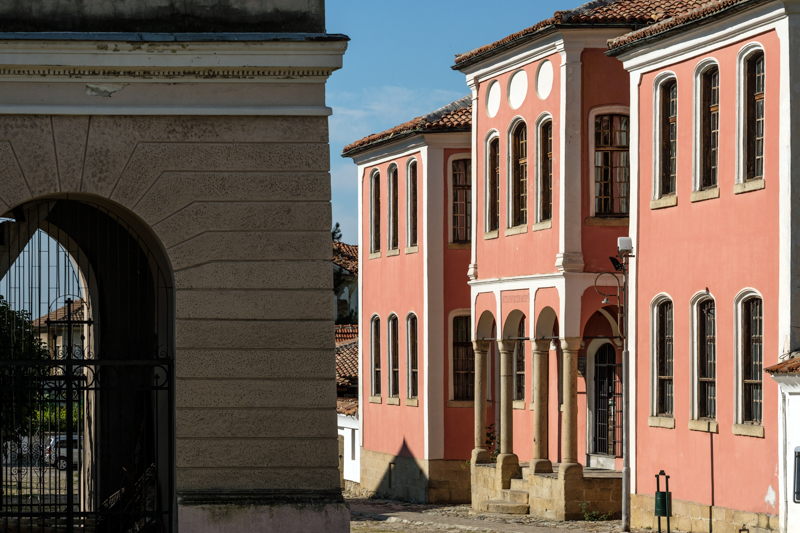 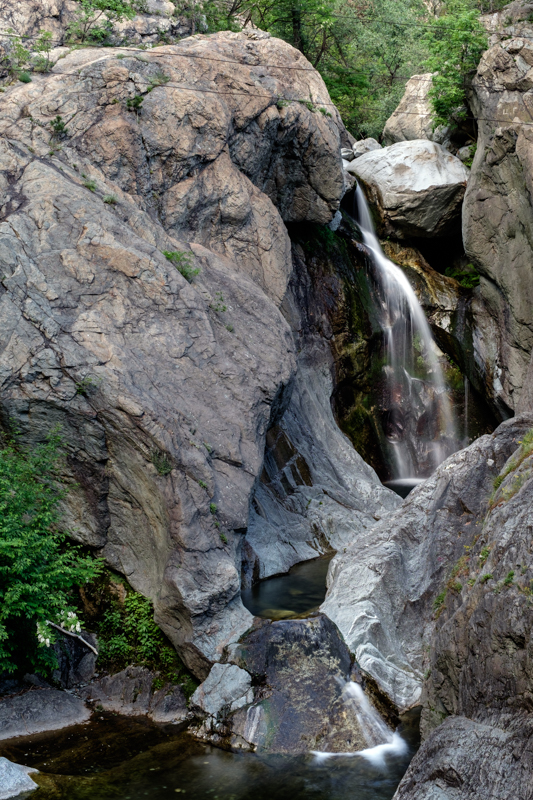 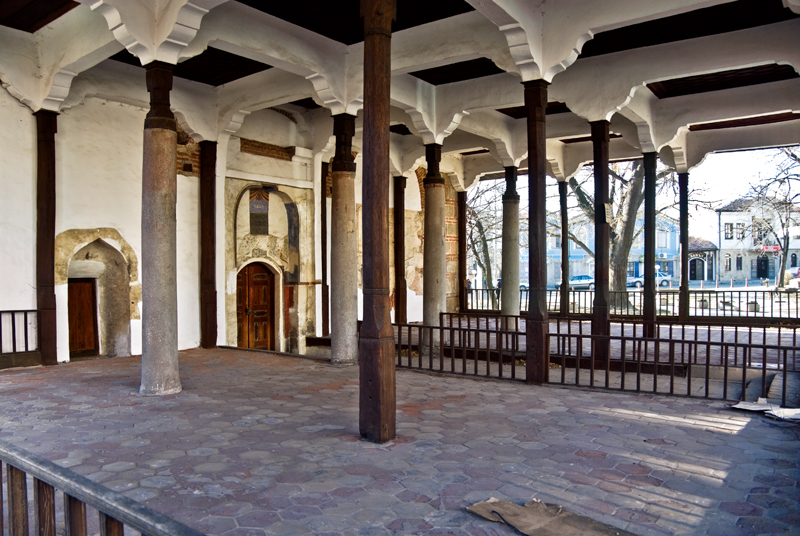 The porch of the Karlovo mosque. The building is a monument of culture but remains closed