You think hoards of tourists destroy the Montenegrin coast charm? There's an easy solution – go out when it's dark 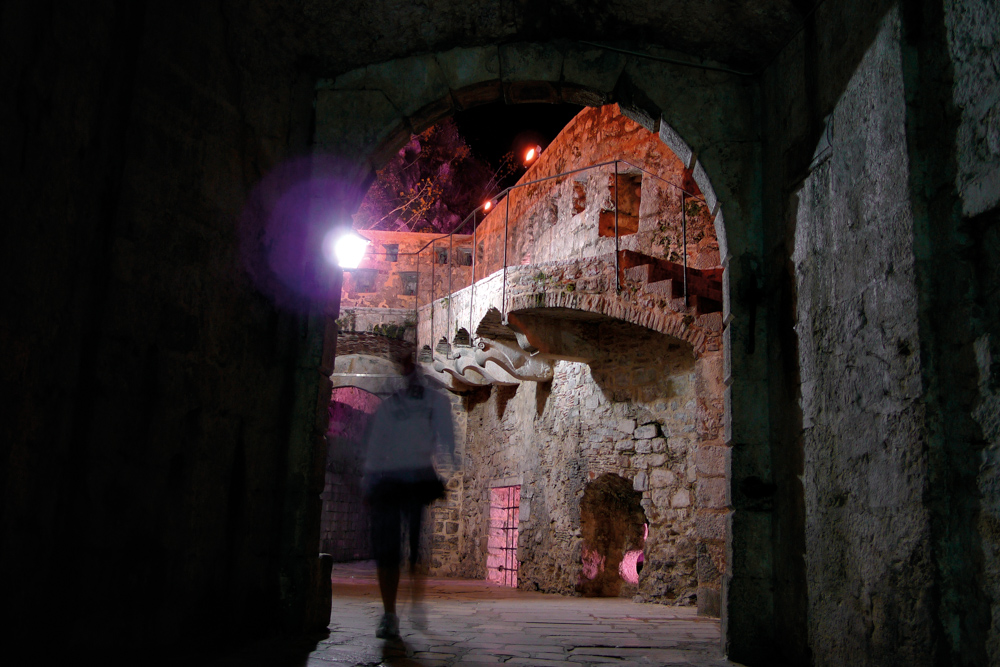 You may simply be a carefree tourist heading for Kotor with the sole purpose of immersing yourself in the Medieval atmosphere of Montenegro's most beautiful town. You might equally well be looking forward to the spectacular drive along the perilous winding road from Cetinje and the stunning views that open up to Kotor Bay, a miracle of nature, with its crystalline water surrounded by steep mountains. And most probably before you started your trip you made plans to visit a restaurant where you could enjoy the ultimate fusion of Eastern and Western European cuisines: squid-ink risotto prepared to the original Italian recipe and taken with strong Balkan grape brandy.

Unfortunately, it's more likely that your first sight of Kotor – once your eyes have got somewhat used to the vivid beauty of the bay and the nostalgic air of the Old Town – will leave you feeling irritated. Irritation at East Euroepan nouveau riche and other Lucky Bastards who have weathered the global economic crisis and are now in Kotor in their droves hunting for holiday homes.

Montenegro has been an independent country since 2006, but the most daring economic decision the government has taken so far was to adopt unilaterally the euro as the country's national currency. The rest of the vision for developing the local economy was left to the least demanding, though most vulnerable, branches of the economy: tourism and real estate. And smuggling. (Italy's Prosecution Office announced in January 2011 that it was considering bringing cigarette smuggling charges against Milo Đukanović, Montenegro's former president and prime minister). 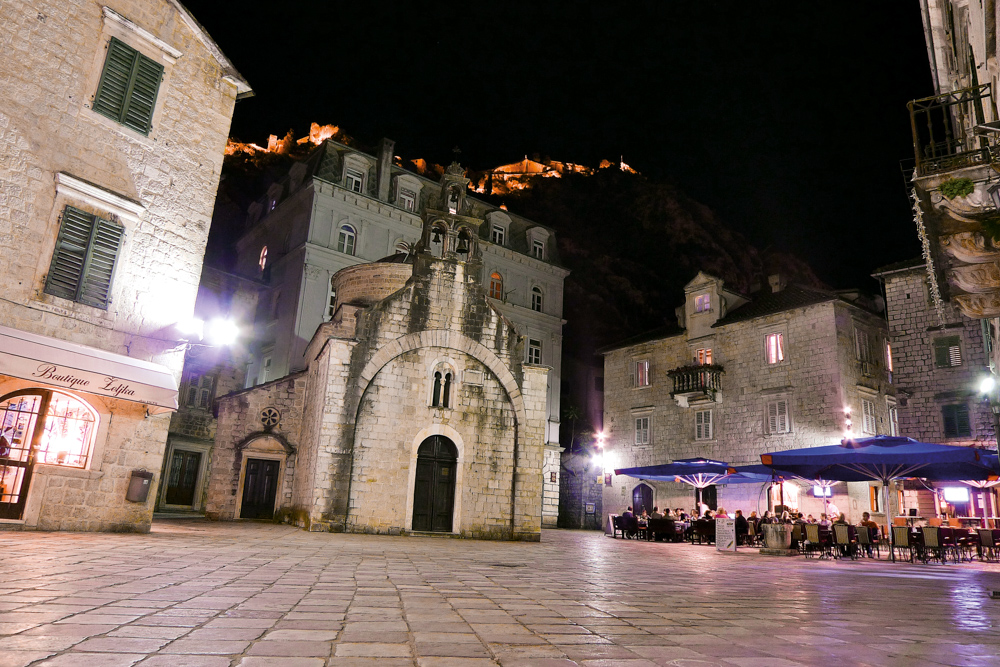 Inevitably, Kotor, which is under the protection of UNESCO, has fallen victim to the get-rich-quick mentality and this is precisely what makes the invasion of holiday home seekers so annoying – it spotlights the radical transformation the town has gone through over the last couple of years.

During the greater part of its history Kotor was home to active, bold and enterprising people who used the town's location at a crossroads of the Adriatic and the Balkan hinterland to amass fortunes through commerce. These people knew a few things about risk. In the 18th Century, for example, they owned nearly 400 ships, which they used to do business on an international scale. Fully laden mule caravans wound their way in and out of the town on one of Europe's most dangerous roads, known as the Ladder of Cattaro, which zig-zags its way up the steep mountainous slope above the town, parallel to the famous Cetinje Road.

Kotor was founded in the 2nd Century BC by the Romans, who expertly assessed its strategic importance. In the Middle Ages the town, known as Cattaro, acquired new prominence, as the Mediterranean was no longer an inward-looking sea. The aquatic centre of the Roman Empire had become at once a border and a battlefield, where the military, political and commercial interests of all the states that considered themselves Great Powers clashed.

It is said that Kotor changed its rulers 14 times. This may be true, as it's hard to think of a famous state that did not rule over Cattaro at some stage. The list includes Byzantium, the Saracens and even Bulgaria under King Samuil. Then came medieval Serbia; the Ottoman Empire, whose sultans twice laid siege successfully to Kotor; and the Habsburg Empire, later Austria- Hungary, which governed Kotor until the the end of the First World War. From then until 1945 the town was disputed between Yugoslavia and Italy. The only ones who succeeded in controlling Cattaro for any appreciable amount of time were the Venetians. The town was part of their republic from 1420 to 1797, when it was conquered by Napoleon. The Venetians were also those who left the most visible traces in the kaleidoscopic architectural heritage of Kotor (the town was given this Slavonic name in 1918, when it became part of the federation that eventually called itself the Kingdom of Yugoslavia). In fact, Kotor's chief landmark, St Tripun's Cathedral, as well as sections of the fortress wall and other churches, were built between the 6th and the 12th Centuries. For their part, the French added a clock to the charming 12th Century tower which is the main attraction of the Square of Weapons, the Old Town's largest plaza.

Yet Kotor definitely has a Venetian character, and this can be felt in the cobblestones polished by generations of walkers, in the Gothic arches of the rich merchants' houses and in the imposing fortress wall, which ascends the incredible surrounding heights. 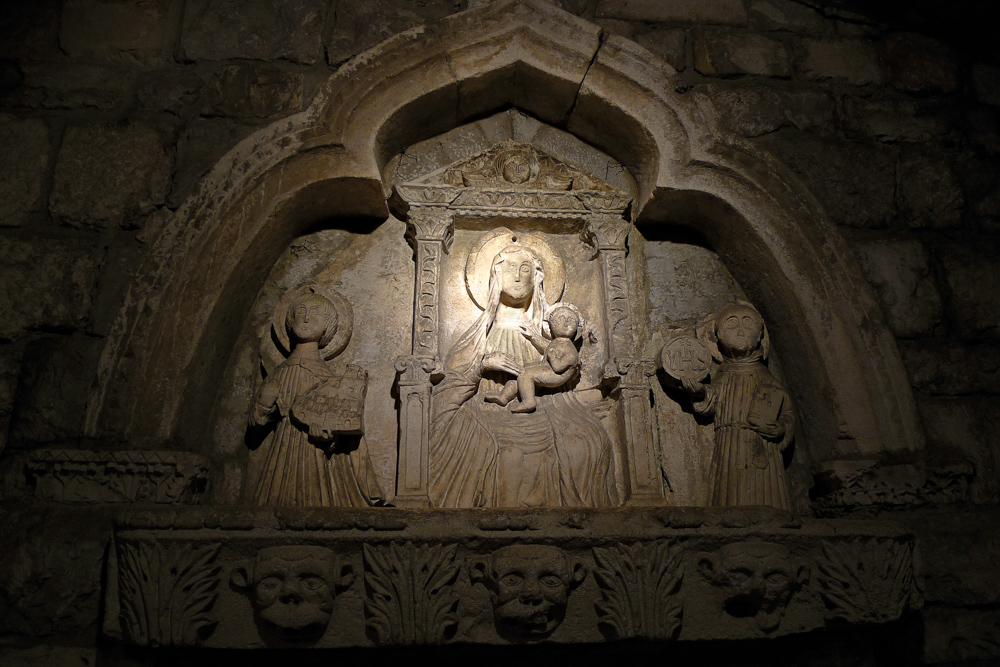 A newer element has been added, however, to this Venetian setting. Try as it might to become a "luxury trap" for wealthy tourists, Kotor still has the atmosphere of a place that for decades lived in Socialist Yugoslavia. This is immediately perceptible: a Socialist propaganda slogan can be read above the main gate of the fortress and nearby is one of the greyest – and poorest – open-air farmers' markets you're likely to encounter in the Balkans. On the peeling façades of the houses there are commemorative plaques honouring Communist resistance fighters who opposed the Italian occupation in 1941–43.

So, what do you do if all the holiday home seekers keep getting in the way of your plans to embrace this strange, inimitably eclectic atmosphere?

It's easy: wait until nightfall, when all the affluent tourists desert the Old Town. The cobblestone streets empty and you will hardly come across anyone, even in the Square of Weapons. The town is yours to conquer.

This is when you discover Kotor's true delights: the smell of stew that wafts from somebody's kitchen mingles with that of the water in the moat. Public fountains spray and spout water into the evening air. The town is a dark, eerie labyrinth of alleys, arcades and streets and insofar as there's any light, it comes from unexpected sources – an underground rock club or two strange leftovers from Communist days – the local chess club and one for disabled people.

This is when you get to experience the other advantage of Kotor. Abandoned by the daytime tourists, the town abounds in restaurants where you can savour the famous risotto with squid ink and sip a glass or two of grape brandy in peace.

Climb the fortress wall. There are between 1,350 and 1,500 steps (the counts vary) and stunning view towards the bay. 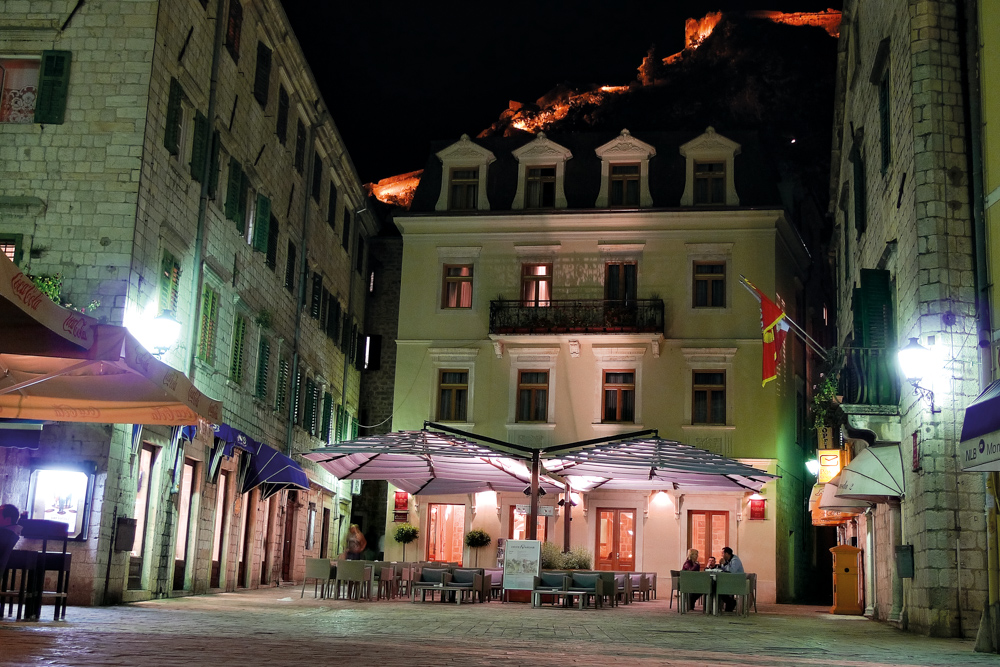 While you're there, take a look at the Gospe od Zdravlja Chapel. It was built in the 16th Century by the grateful population who had survived a great plague.

Order an espresso in one of the busy cafés in the Old Town and get the feeling you're in Italy.

Take a look at the 14th Century frescoes in St Tripun's Cathedral. If you feel up to it, try solving the dispute that's still bothering art historians – whether they were created by Byzantine or Serbian painters.

Visit St Luke's Church – twice. Once when the Eastern Orthodox mass is being sung there, and again for the Catholic ritual.

Climb the Ladder of Cattaro – the former mule path is open for tourists.

Stroll around Kotor Bay. You can spend an entire day passing by abandoned churches, and those still in use. Admire the beautiful residences, the townlet of Perast and the two islets, Saint-George and Our-Lady-of-the-Reef.