The men's voices appeared suddenly from the darkness that had fallen over Mestia, the most accessible town of the Upper Svaneti region, in northwestern Georgia (the country, not the US state).

Their song was strange, three different voices weaved into a single melody that sounded as if from another time – and its effect was hardly due to the strong homemade Chacha, or brandy, guests are treated to here.

Located on the border between Europe and Asia, the Upper Svaneti is a region where the sense of being in another time and universe comes often. Only one proper road penetrates this area, which on its 5,776 sq.km has packed four of the 10 highest peaks of the Caucasus mountains in a landscape so dramatic that it  makes the word "sublime" feel banal and powerless. Travelling farther from Mestia, deeper into the Upper Svaneti, asks for a local driver able to navigate the potholed roads (where there are any), and stamina for those who decide to hike.

This mountain isolation explains why the Upper Svaneti, with a population of about 15,000, has preserved its traditions for centuries, and even millennia: the archaic three-part polyphonic singing that probably predates Georgia's Christianisation in the 4th century; the animal husbandry; the language of the Svans ethnic subgroup with its several Lower and Upper Svaneti dialects; the importance local families still pay to keeping the clan's honour.

The towers are a major Upper Svaneti tradition resisting modern times. Rising for up to several stories, with massive walls and silhouettes that gradually grow thinner at the upper end, they – combined with the impossibly photogenic mountain peaks in the backdrop, – are the most recognisable image of the Upper Svaneti, an instant lure for hikers, history buffs, and lovers of the strange and extraordinary.

Svaneti towers appeared in the 11th-12th centuries, as a way to provide the Svans (the group has been constantly living here from at least the the end of the 1st century BC) with protection against invaders. The mountains might seem impenetrable, but from time to time, with the ebb and flow of local and regional powers, the region experienced a dire need of fortification. As houses were too scattered for building of fortress walls, each house was turned into a fortress.

This solution is not unique for the Upper Svaneti. People in isolated mountains like the Mani in the Peloponnese, in Greece, and Teth, in Albania, had built towers, too, to protect themselves from the generation-spanning local blood feuds. House towers were built also in mediaeval Italy, like the still existing ones in San Gimignano that offered protection during the prolonged conflict between Guelphs and Ghibellines. Bulgaria has its own examples, too; the mediaeval Hrelyu Tower in the Rila Monastery and the later fortified towers in Vratsa, Kyustendil, Dupnitsa, the Arapovski Monastery all provided safety during local conflicts and bandit raids.

The towers of the Upper Svaneti, however, have their distinct features. With layouts and planning evolving throughout the centuries, they were used not only in turbulent times, but also in times of peace as safe places for the family wealth. Most of the time, their owners would inhabit a two-storey attached house.

Troubles never left the Upper Svaneti alone – from the 13th century Mongol invasion that was successfully repelled to the Russian takeover in the 19th century and the Bolshevik revolution in the 1920s that weren't – so the need for towers never disappeared completely. Many of them still stand, with the most impressive examples in the village of Ushguli, the highest inhabited village in Europe. There one will find about 200 preserved towers, recognised by the UNESCO as a world cultural heritage.

Today, the towers are not used to repel outsiders, but to lure them into discovering the Upper Svaneti with its amazing landscapes, mesmerising songs, and strong  Chacha. 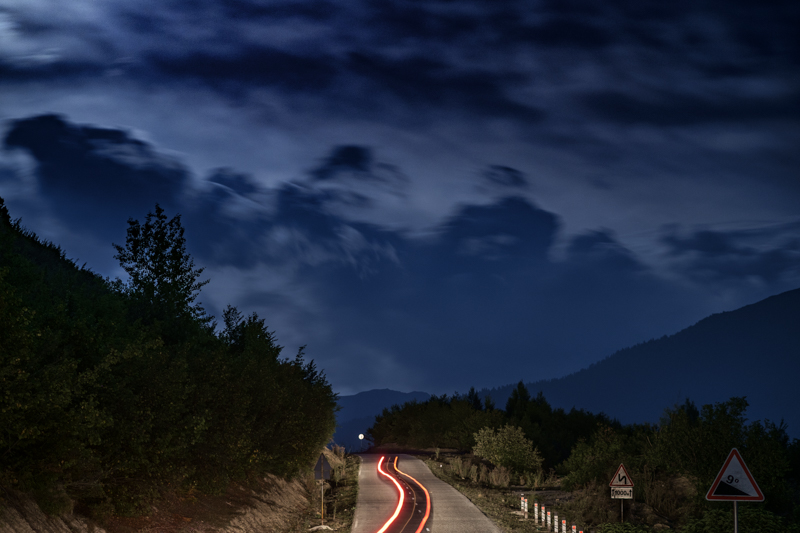 The only proper road into Upper Svaneti 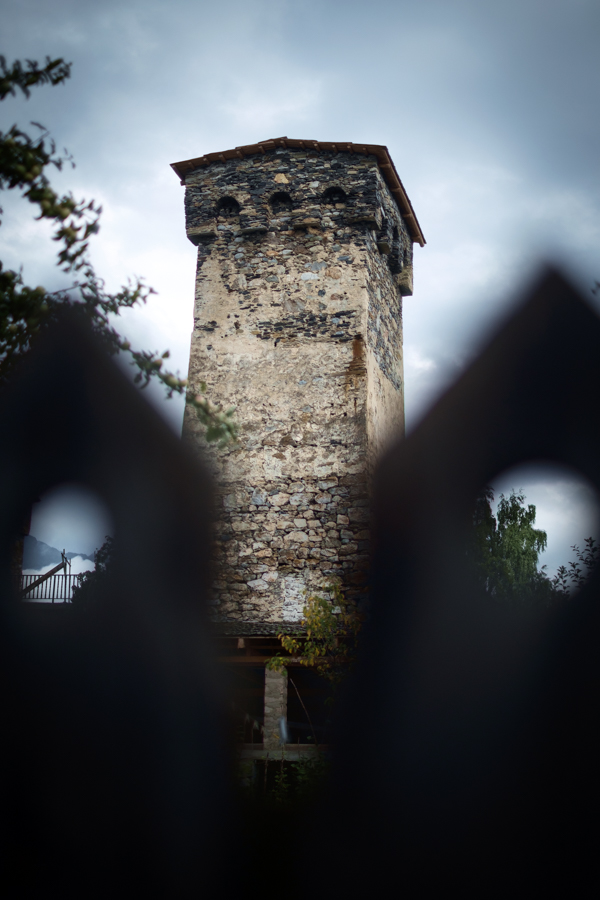 Each tower has offered protection to generations of Svans 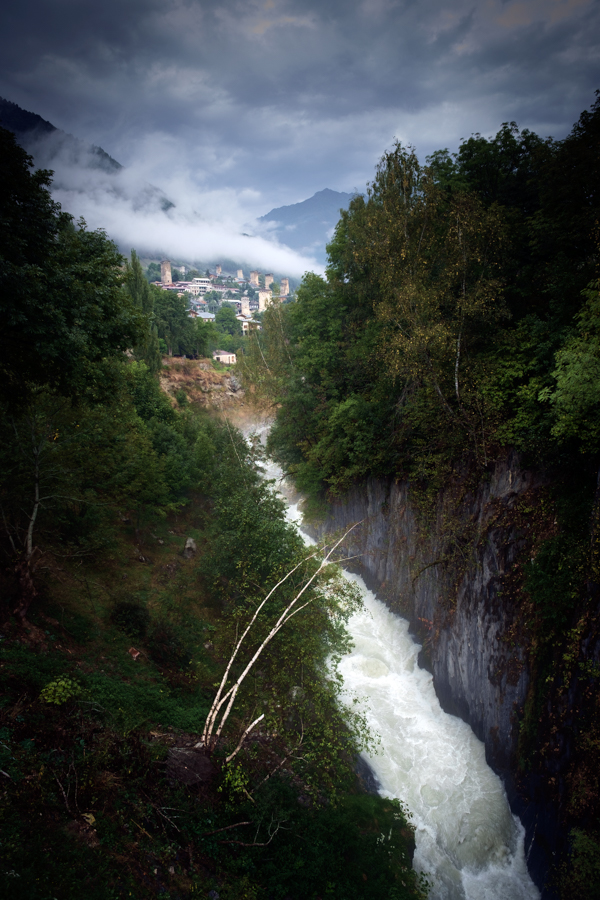 River in Mestia. Due to its remoteness, the town is now attracting a small but relatively stable number of tourists 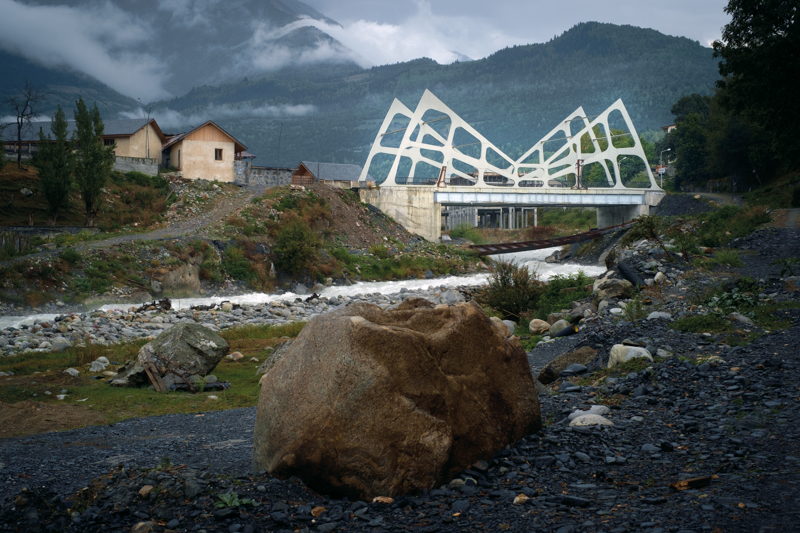 A futuristic bridge in Mestia. New development in the town include a pseudo traditional complex in the centre and an out-of-this-world police station 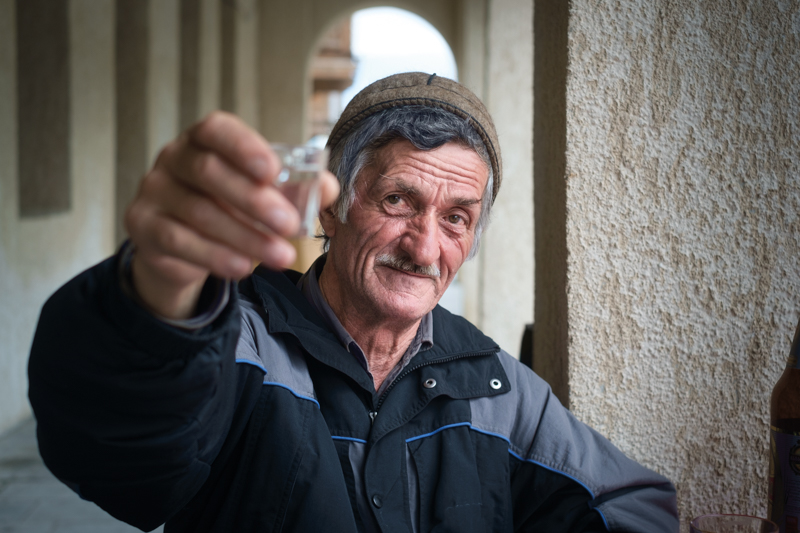 Some locals begin their days with a glass of homemade Chacha