Forgotten remains of Roman city are a small gem worth visiting 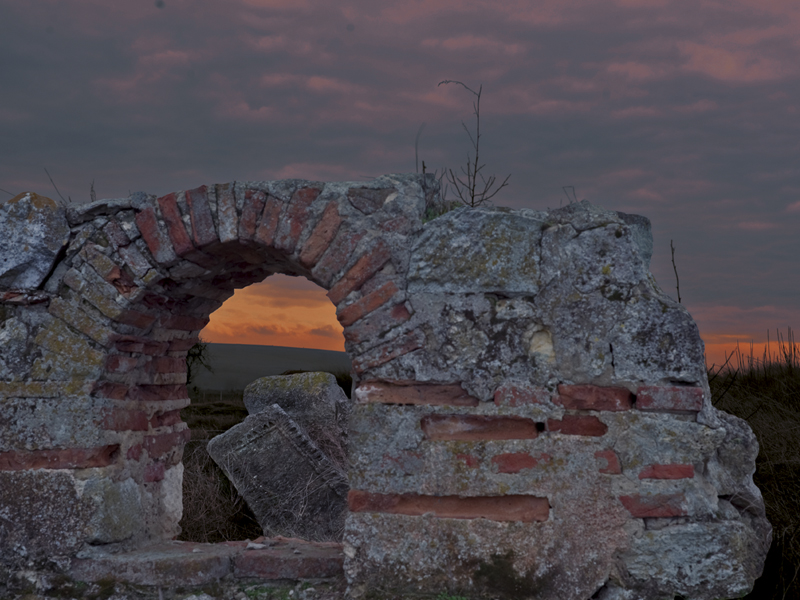 The second bridge over the Danube, between Bulgaria's Vidin and Romania's Calafat, is a project which took decades to be conceived and years to be built. Funnily enough, some kilometres downstream there is proof that spanning the Danube with a bridge was not all that difficult.

On 5 July 328, the thousands living in and around the Roman city of Ulpia Oescus gathered on the bank of the Danube to witness a historic event. Emperor Constantine the Great himself had come from Asia Minor to consecrate the new bridge over the river. The structure of stone piers and wooden beams linked Oescus on the south bank with the satellite castrum Sucidava on the north, and would facilitate Roman manoeuvres beyond the Danube. It was good for trade, and important for security.

The bridge has disappeared, but Oescus is still there, beside the modern village of Gigen. Encircled with a fence, it looks like a dull place – there is no museum there, and all the statues, inscriptions, riches and coins found by archaeologists during the decades of excavations are in the archaeological museums of Sofia and Pleven.

Once inside the fence, however, you enter a different world. Streets, columns and parts of reliefs gleam through the overgrowth. The place looks immense, stretching far and wide around the excavated area.

The origins of Oescus are found in the first years of the 1st Century AD and the Roman rule there. The Legio V Macedonica was stationed in a camp on the strategically positioned plateau by the Danube, to secure the border and to ensure that the Thracians within the Roman realm would remain quiet. Soon, a second settlement appeared by the camp. It was a canabe, a place inhabited by retired soldiers and civilians who always accompanied the army: merchants, craftsmen and publicans, concubines and prostitutes. There was even a third settlement, the village of the local Thracians, who profited from trade with the army.

In 62, the legion was sent to Judaea and replaced with another unit. Trade continued to thrive and, when in 106 Emperor Trajan finally won the prolonged war with the Dacians, Oescusw was important enough to be proclaimed a city.
Change brought change, and soon the former camp was unrecognisable. A grand forum adorned with porticoes and public buildings appeared, along with paved streets, public baths, and water and sewage systems. An aqueduct fed Oescus with fresh water from springs 20 kms away, and a stone wall protected it from invaders and from the Danube floods. Grandiose temples were built.

Oescus was the home of rich and poor, of local Thracians and settlers from the Apennines and Asia Minor. It was surrounded by the rural villas of the rich, and by workshops for glass and pottery.

A mosaic found in 1948 on the floor of a grand public building sheds light on the cultural life of the citizens of Oescus. Three masked men enact a play, and above them there is an inscription, "Menander's Achaeans." To that date, no one knew that the great Athenian playwright had produced such a comedy – and there it was, on the floor of Oescus.

The 2nd Century was good for Oescus, as the empire was stable and peaceful. But later political instability, Barbarian invasions and economic crises upset life there. The city revived during the rule of Constantine, as the construction of the bridge shows, and managed to survive invasions for two more centuries. It was completely abandoned after the devastating attack of Avars and Slavs, in 585.

In the 10th Century, Bulgarians settled above the remains of Oescus, building their houses from its ruins, and erecting a church over the erstwhile temple of Fortuna. They remained there until another invasion, that of the Ottomans, displaced them.

The ancient ruins lay forgotten for hundreds of years, until in the 17th Century when an Italian military engineer identified them as the ancient Ulpia Oescus.