PAVEL KOYCHEV'S ART BY THE HIGHWAY

Traditional villages, Thracian rock shrines and natural phenomena are the most common off-the-beaten-rack experiences in Bulgaria, but when you take the small road from the OMV petrol station at the 68th kilometre on the Hemus motorway near Osikovitsa village, you are heading for a surprise. 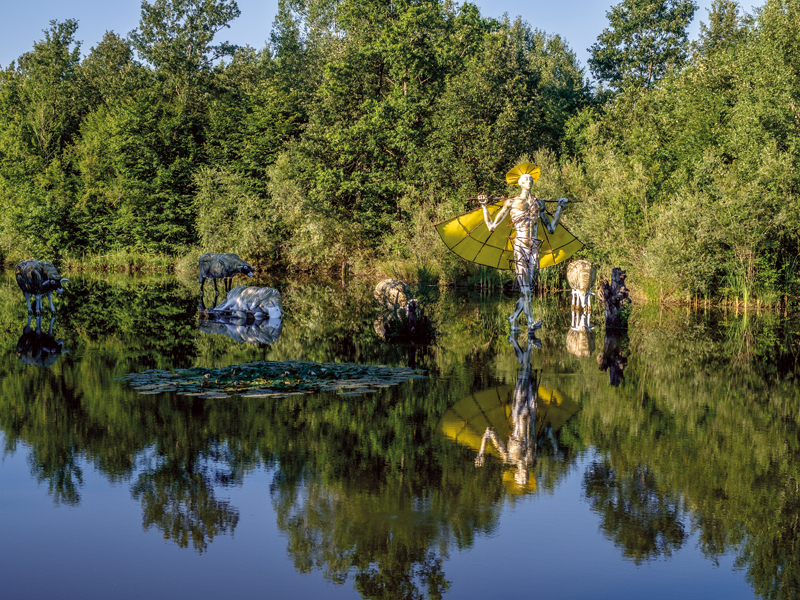 This time, the hidden gem of Bulgaria is modern art.

The signs for the Originals Art Gallery lead you to a larger-than-life, white shepherd with a bright yellow cloak, leading his flock to the still waters of a small creek. The Vodna pasha, or Water Grazing, installation by Bulgarian sculptor Pavel Koychev is a mesmerising reflection on contentment and the connection with nature and appeared here first for a short time in 2009.

It was restored using a special technique to keep the sculptures above the water in the summer of 2016. The installation is part of a larger exhibition celebrating the art of the 77-year-old sculptor, who has been one of the most interesting talents in Bulgarian sculpture since the mid-1960s. Never shy of experimenting with shapes or materials, Koychev has been known since the 1990s for his installations of natural materials. His project Obitalishteto, or The Habitation, a construction of traditional building materials, including cow dung, was exhibited in the centre of Sofia, and in front of the Notre Dame de la Chapelle church in Brussels.

Koychev's jubilee exhibition near Osikovitsa is centred around another creation of his: the Gradezhat, or The Construction. This two-storey installation of stone, wood and mud is also a perfectly habitable house, and was built in 2008 with the help of that rare bird in modern Bulgaria: a wealthy businessman who was interested in sponsoring art, not church construction or football clubs.

Koychev chose the green lawn around Gradezhat for the first part of his exhibition: Originalite, or The Originals. Here there are, more than 50 scaled-up models of sculptures he has created since the start of his career: heavily-built couples, lingering women, men with clogs or balloons, abstract shapes. Uniformly white on the green grass, all of these change appearance with the changes in the weather and the visitor's perspective. Walking around Originalite leaves a bitter taste: some of the models had been turned into sculptures of bronze and stone, but many were doomed to that limbo between their creator's imagination and the "reality" of being cast in metal and displayed in a public space. Although Koychev was fairly well recognised under Communism, most of his art is in private collections abroad.

The dates of the white models reveal another change in the artist's creative process: the vast majority of them are from before 1989. After the collapse of Communism, Koychev took to alternative materials such as twigs, paper, cloth, and even dung, not only because they fit the evolution of his artistic development, but also because during the times of hardship they proved cheaper and more available for the large-scale projects he had in mind. Interestingly, it was then that his art appeared in prestigious international venues, such as the headquarters of the UN (in 1999) and Bulgaria's pavilion at the Venice Art Biennale (in 2002).

On the brighter side, The Originals are here to stay. The models are made of an impregnated material used in boat construction, and are capable of withstanding all weather conditions.

While the massive forms of The Originals stand unapologetically large and white on the lawn, the second part of Koychev's exhibition is hidden in a small wood nearby. The Yavleniya i izkusheniya, or Occurrences and Temptations, installation was specifically created for this exhibition: a literal web of ropes holding two-dimensional figures that float among the trees, retelling the story of original sin.

The art gallery is open to visitors daily between 9am and 6pm. 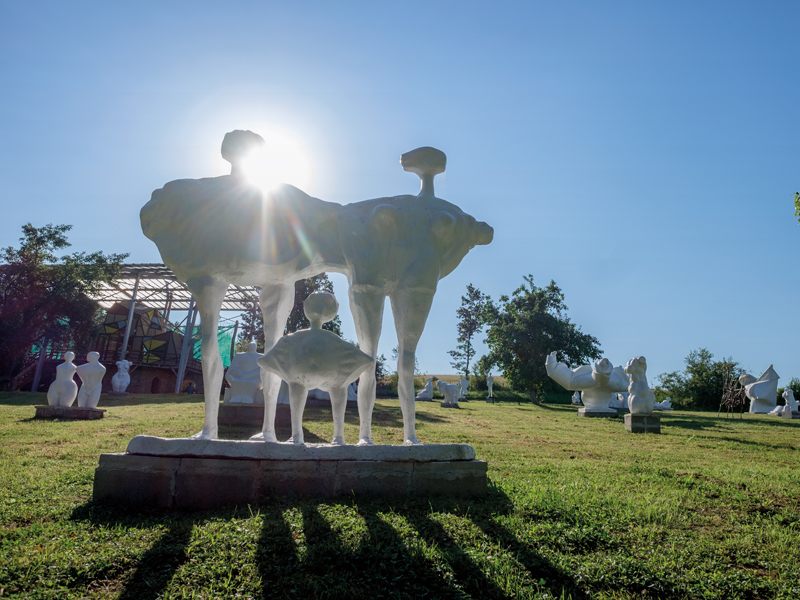 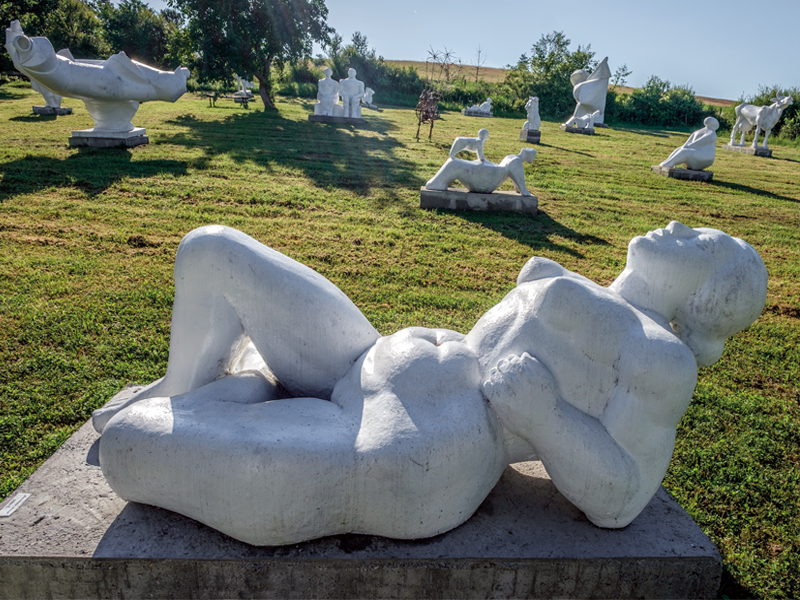 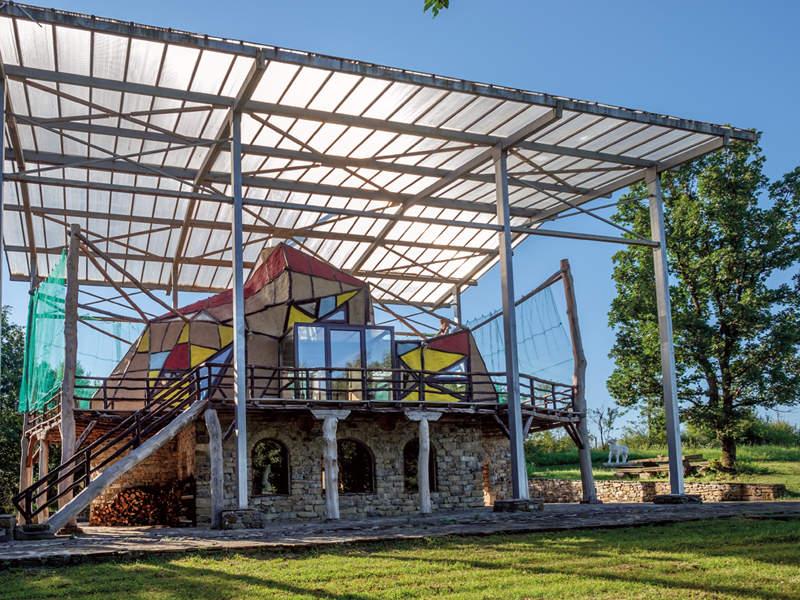 The Construction is a perfectly inhabitable house, rich in quirky detail like the wood-carved bath-tub in the bathroom 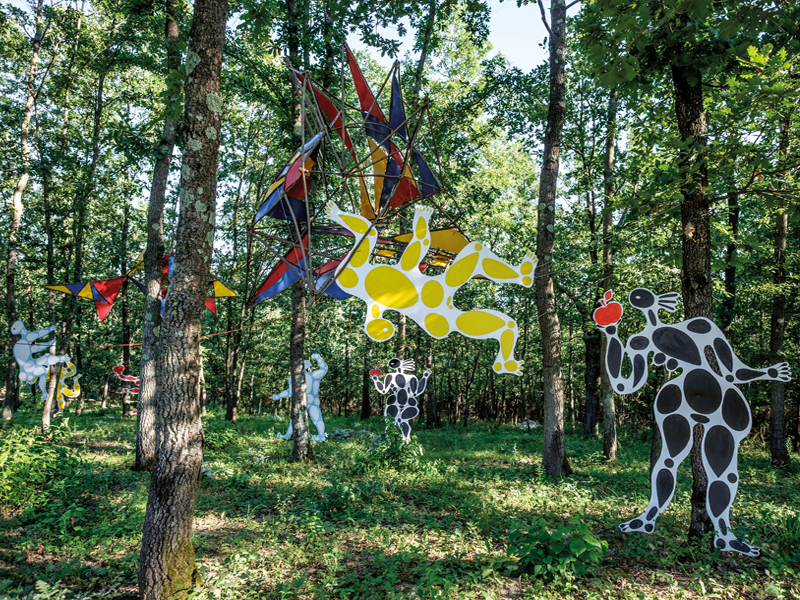 Adam and Eve at Osikovitsa village