PROUD TO BE DIFFERENT? 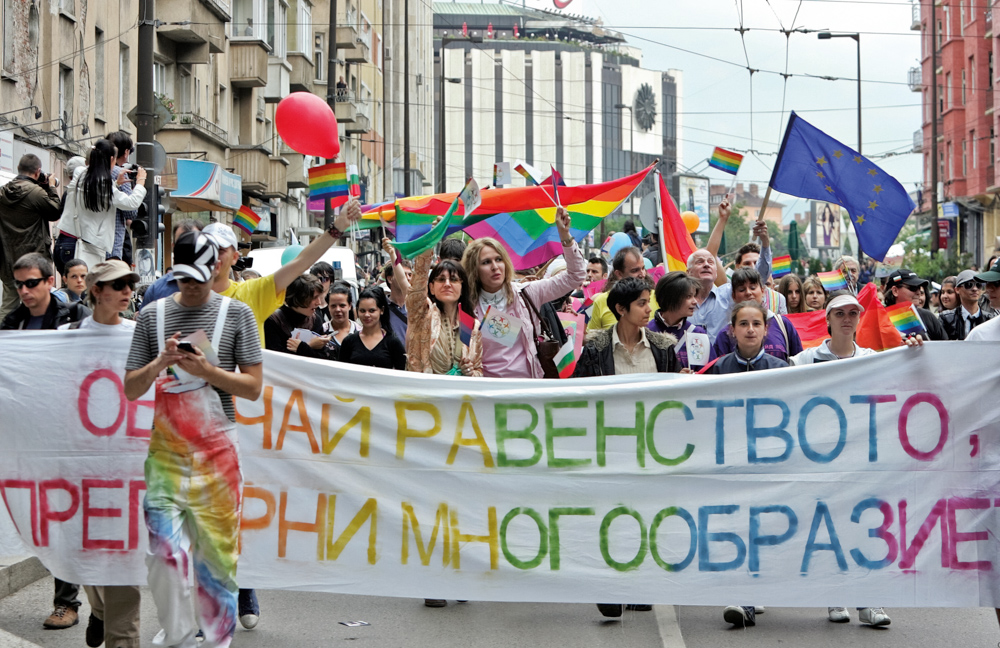 The attitude of Bulgarians to the gay pride parades of recent years curiously resembles their sentiments towards the Orthodox Church: it is obviously wrong, yet presidents, prime ministers and many ordinary citizens vie to be seen kissing the hand of some octogenarian bishop because it does their "patriotic" image good.

Traditionally, Bulgarians, like most other Balkaners, have been less than tolerant towards diversity, and nowhere is this more evident than in their everyday attitude to machismo, sex and family relations. Women should know their place in the kitchen or the beauty parlour, while men must ensure they put bread on the table in return for having their Shopska salads served. Gay and lesbian issues, with a few high-profile exceptions such as pop-folk-star-cum-TV-presenter Aziz, are swept under the rug, especially outside the capital.

Like everything else, however, the situation does seem to be changing slowly and painfully. During the past few years, with the encouragement of Western organisations and even politicians, Bulgaria's gays have started to come out. Sofia's annual Proud To Be Different parade is the most visible event.

But allowing it to take place (unthinkable under Communism) and ensuring that police outnumber the participants is one thing ‒ changing public attitudes is something completely different. The small group of Bulgarians feeling proud to be different by parading on Vasil Levski Boulevard from the NDK to the Red Army Monument was met by wildly different exclamations from the sidelines. "Trash!" and "Die!" screamed supporters of the VMRO, or Internal Macedonian Revolutionary Organisation, a small but vocal party led by a former State Security operative, whose main objective is to prove that the people in the former Yugoslav republic of Macedonia are in fact Bulgarians. "Bravo!" cried the gays' friends and supporters. Mothers tried to cover their children's eyes, while passers-by taunted: "Shame!" and "Poofters!"

The Orthodox Church was perhaps the most outspoken of all the gays' opponents. In a statement posted on its web page and picked up by the media, the Bulgarian clergy used strong language to condemn what it termed a "mortal sin" and "ignominious affray" (Daniel 9:27). "We call on all Christian members of the Bulgarian Orthodox Church to categorically oppose this public, unceremonious and shameful manifestation of the Sodomite sin... which has fatal consequences for the physical and mental health of our people, destroys the traditional bulwarks and values of the Bulgarian nation, and encourages temptation in our youth's view of the world."

Some Western ambassadors pledged messages of support. According to Norwegian Ambassador Tove Skarstein, "all over the world, members of the lesbian, gay, bisexual and transgender community are subject to discrimination, often hidden and with impunity, because of the invisibility of the community members themselves. We reject and condemn any discrimination on the grounds of sexual orientation and gender identity."

James Warlick, the American ambassador, wrote an article in the 24 Chasa daily: "Four decades ago, the gay rights movement in the United States began with the Stonewall riots in New York City. Today, this continued struggle has grown into a global movement to ensure that all people live free of violence and fear, no matter who they are or whom they love."

A similar message was sent by Karel van Kesteren, the Dutch ambassador: "We reject and condemn any discrimination on the grounds of sexual orientation and gender identity. We consider that intolerance and homophobia violate human dignity and are incompatible with the basic principles and values on which the EU is founded."

The Dutch Foreign Ministry had given a small grant to the organisers of the Pride parade "to increase the general awareness of LGBT issues in Bulgaria." A part of that was used to pay up the police providing security.

Steve Williams, the British ambassador, also backed the Sofia Pride participants. "I wish to send a message of support to all those who will be celebrating diversity on that day. Respect for human rights is one of the core democratic values on which the EU is based. Those human rights apply equally to all people, regardless of their race, gender, ethnicity, belief, or sexual orientation. Many excuses ‒ such as respect for religious doctrine or traditional values ‒ are given to justify homophobia. Let us be clear: in today's EU there can be no excuse and no justification for homophobia, on any grounds."

But the clergy disagreed. Father Nikolay, the bishop of Plovdiv, put it quite plainly: "European laws to a large extent contravene the laws of Christianity. This is why we must defend our faith and protect the positions of the Holy Church."