WHO WAS PETER DEUNOV? | VAGABOND Skip to main content

Since the construction of a cable car to Seven Rila Lakes, visiting one of Rila's most beautiful locations at an altitude between 2,095 and 2,535 m is easy. Hundreds of trekkers and casual tourists do it on a daily basis. However, the people who gather at one of the lakes on 19 August are are not tourists.

Dressed in white, they perform a strange circular dance on the green meadow, under the blue sky. They are the Universal White Brotherhood, Bulgaria's best-known esoteric teaching.

Supporters of the Universal White Brotherhood liberally quote Albert Einstein as having said that while the whole world admired him, he admired one Bulgarian, Petar Deunov. There is no record of Einstein having ever said that in actual fact, but the Universal White Brotherhood, founded by Peter Deunov at the end of the 19th and the beginning of the 20th centuries is the most popular spiritual teaching to emerge from Bulgaria since medieval Bogomilism. At present it has adherents worldwide, including France, Japan and the United States.

Peter Deunov (1864-1944) proffered an occult mixture of ideas for soul, brain and heart development, and of resuscitation of the body. He considered God to be a pantheist deity, while Christ was an occult teacher and the leader of an universal brotherhood. The universe was the home to angels, archangels and other supernatural creatures and forces, and human souls got reborn. Deunov considered the white race to be superior as it was the most developed in comparison to all others. It was the final evolution step before the attainment of a hypothetical "sixth," "supreme race." To achieve perfection, all human souls had to be reborn as white people.

The followers of Deunov practise their faith by meeting, usually at open spaces and at sunrise, reading Deunov's works and dancing a circular dance Deunov called Paneurhythmy, which uncannily looks like light physical exercises the way they would have looked like had aerobics been popular in the 1920s.

Deunov's ideas appeared at a time when esoterism fell on fertile ground all over the world. Spiritist seances were in vogue, the teachings of the Orient tickled the imagination, and people sought novel ways to satisfy their spiritual needs.

It is not very clear how and why Peter Deunov laid the foundations of his teachings. In 1888-1895 he studied medicine and theology in the United States. In 1896 he published a book where he referred to the development of mankind into a "new culture" that was supposed to make itself known in the 20th century.

As early as 1897 he had a group of like-minded followers. That same year he founded his Association for the Elevation of the Religious Spirit of the Bulgarian Society. This was the beginning of what would evolve into the Universal White Brotherhood, in 1918. Deunov, whom his followers called Beinsa Douno or simply The Teacher, would go on travelling Bulgaria and giving thousands of talks in a bid to attract new followers. 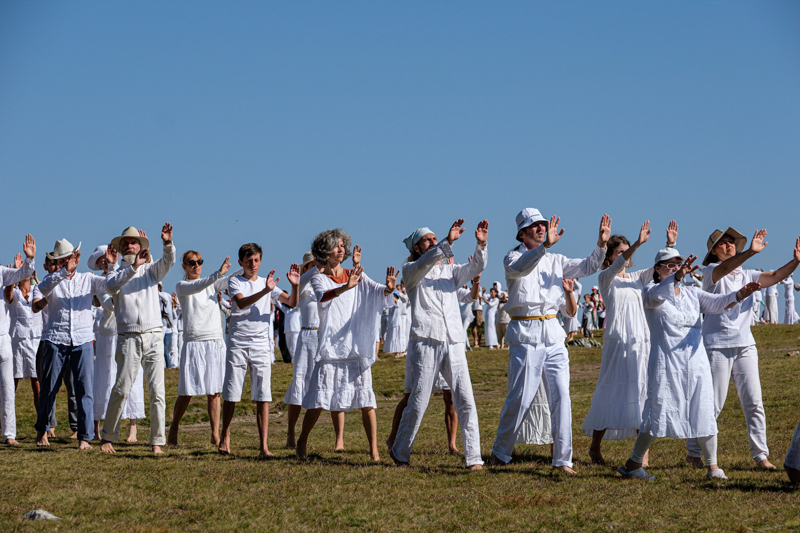 His preachings for brotherhood and universal love, a new morality and a soul revival through spiritual evolution fell on understanding and sympathetic ears in a Bulgaria devastated by two Balkan and one world war that resulted in a couple of national catastrophes. His charisma played an important role in the rising popularity of the White Brotherhood. In contrast to other religious leaders, he appeared to actually live by his teachings and commandments. In the 1920s his reputation as a seer and healer gained him an almost saint-like status. The Bulgarian Orthodox Church was quick to respond. In 1922 it excommunicated Deunov and declared his teachings a heresy.

The excommunication had little impact on the popularity of Deunovism. In the 1930s and 1940s the White Brotherhood expanded its outreach as it established contacts with other fringe groups, including the associations of the Esperanto speakers, of the vegetarians and of the abstainers. Deunov's meetings were attended by members of the establishment and King Boris III was also in touch. According to one hypothesis, the true saviour of Bulgaria's Jews from the Holocaust was Peter Deunov who had threatened the superstitious king whereupon the royal ducked.

Peter Deunov died in 1944, just a few months after the Communists had seized power. He was buried in a small park in the Izgrev area of Sofia where he had set up a residential community for his followers. Later, the government expropriated that community's properties and had the USSR embassy built on its site. Deunov's tomb, however, was left untouched. Through all the years of Communism it was carefully tended to. Perhaps the reason for this is a curious fact in Peter Deunov's life. In the 1920s he was a neighbour of Georgi Dimitrov, who went on to become an associate of Stalin and later Bulgaria's first Communist dictator. Deunov was kind to him and even provided a safehouse for him on several occasions.

Deunovism is on the rise in the 21st century. The grandest manifestation of Deunovism happens on 19 August every year, New Year's, according to Deunov. Thousands of followers gather at one of the Seven Rila Lakes, called The Kidney, a location Deunov considered impregnated with high energy, a vortex. Deunovists from around the world dance the Paneurhythmy in the early hours of the morning to the tune of violin music which was composed by Deunov himself.

Peter Deunov's grave in the Izgrev neighbourhood of Sofia. Deunov established Izgrev, or Sunrise, as a community for his followers. Under Communism, most of it was redeveloped as properties for the diplomatic corps. Today Izgrev is one of Sofia's poshest neighbourhoods