© Dragomir Ushev
The producer of Raging Sharks, Mansquito and Death Train admits to being 'tortured by the Bulgarian Privatisation Agency. Why not make a musical?
Builders are swarming over scaffolding, busily hammering, drilling and sawing away. It sounds like a Black Sea developer's dream, but we are not in Varna or Burgas, we are on the edge of Sofia, in Boyana, where the set for a new John Cusack film is under construction. In the middle of this industrious scene stands David Varod, Nu Image's man in Bulgaria.

Nu Image are the new owners of the Boyana Film Studios, perhaps the largest in the Balkans. Last year, they beat Ealing Studios and Bavaria Films in a bid to buy Boyana from the state. However, the Bulgarian Privatisation Agency reneged on the deal and a messy few months of political and diplomatic wrangling ensued.

Bulgarian filmmakers were opposed to the sale of Boyana to a company which had made its name with small-scale action flicks, while Nu Image argued that they were being humiliated by the state, which was not honouring the deal. Although the deal is now officially sealed, loose ends straggle on.

The LA-based distribution and production company are not newcomers to Bulgaria. They first came here to make A Bridge of Dragons with Swedish action man Dolph Lundgren and now, eight years on, they have made 55 films. Their latest release The Black Dahlia, which was directed by Brian De Palma and premiered in Sofia in October, is Nu Image's hope of entering the league of "big actors and big movies". As Varod says, "The plans are much bigger now that we are moving into Boyana. We have many European movies coming next year. I'm planning over 20 movies in the first year, after the second year maybe 30 or more movies a year."

To achieve this goal, however, much work needs to be done. The Boyana Studios, built in the 1960s during the Communist period, are "crumbling". Varod plans to build 10 new stages, the "biggest in Europe".

Sitting in a makeshift office in Boyana, Varod, a set-designer-turned producer, tells me about Nu Image's plans.

Bulgaria is becoming a major filmmaking location in Eastern Europe. What effect will this have on the Bulgarian film industry and Bulgarian actors?

I think that Bulgarian actors will win big time. Two years ago I started an English school for the actors to try and get them into more English-speaking movies. They have more opportunities to get jobs here than in Hollywood. I have a daughter who's in Hollywood, she's an actress. How much work do you think she gets? Zero. And there are another
100,000 or more kids like her hanging around there waiting, working as waitresses, you know, hoping to get a break. Here, sitting beside a studio that will do easily 20 movies a year, think how much work it can create for actors.

No doubt it will also have a positive effect on the Bulgarian industry. I haven't seen much progress and support from the Bulgarian industry in general. I had serious talks with the Ministry of Culture; I said, guys, look, if you work with me, I'll show you how we can make so many Bulgarian movies, far more than we do now, but you have to listen and be a bit more creative. I said to them, if you want to make the right decisions for movies, you have to make your boards a little bit younger and have some more creative young directors sitting on the boards.

As for Boyana, it will support the Bulgarian industry big time, at the level of equipment, stages, lab and so on, and I will give huge discounts to local Bulgarian movies. They will get a lot of support from us and I will be ready to do some part of the movies with local producers. We can also definitely help them with distribution, that's the strongest side of Nu Image.

After all the complications with the deal, what is your advice to people thinking of investing in Bulgaria?

I'm very careful with this because I'm an honest guy. People who know me know I'm a very straight person. I cannot tell an outside producer or investor "Come here and you'll have a good life". I'm in a conflict because I feel part of this country. 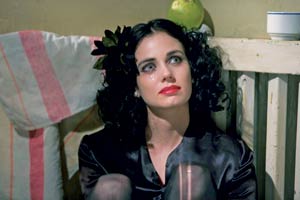 I feel part of the process and I want to be proud of what's happening here and I want more investors to come here. But up to this point, as an investor, I've been, I wouldn't know which word even to use, but I was humiliated. I was humiliated by the Privatisation Agency. I had treatment that I would not want for my enemy. It was disgusting. The deal is done, but it's still another little signature here, another little signature there. And every time you come to one of these little signatures they torture the shit out of you. We lost a lot of money. I'm not talking small numbers. Some of my programmes for this year were completely screwed. The amount is in six figures. It's no joke at all; I've lost contracts with actors, with big directors. It's not funny. It shouldn't be this way.

The contract was made and the deal was done with the government of Bulgaria. The government should be watching these kinds of things to make sure that they are done properly. Because a lot of people are watching me, a lot of investors, and I know a lot of people around the world who want to know what's happening. I was avoiding the media till now 'cause I didn't want to affect what's happening here and the process of moving into Europe. I have people calling me from the BBC, I know journalists around the world, and they wanted to know what's happening. I avoided them because Bulgaria's in this process of moving into Europe. And I didn't want to be the one... if I went to the European media it would not make Bulgaria look good and I was trying to avoid this.

They love coming here. What they see here is a warm nation and they feel it walking in the street, going into restaurants, being in hotels here. The actors or directors or big guys who come from outside here feel wanted, they feel welcomed and that's a nice feeling. Let's face it, Bulgaria is a very warm country and people feel it when they come here. Sofia is getting more and more attractive. Every day I go out walking I see another building that's been renovated. There's fantastic nightlife in Bulgaria, with great restaurants and clubs. Then you have nice museums and art galleries, there's a lot of art here for foreigners who like culture.

That's the one side, the other side is that they feel very comfortable with the level of technicians that we've created here. These kids we're working with are of a very high standard, they're very different from anything you'd find in Hollywood. People are coming into a very professional operation. They feel comfortable on a professional level and then they feel nice when they go back to the hotel and when they're going around town. Hollywood is a small place and the word there is that Sofia's a wonderful place to go. 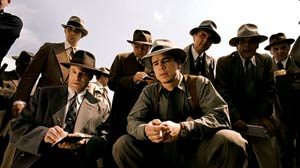 What would be a perfect day for you in Sofia?

For me a perfect day is to go and relax in the mountains. That's the best thing to do to get away from people, which is what you want when you're all week with hundreds of people. You sit in the mountains and just enjoy the view and the quiet and the relaxation. And if it's Sunday morning, I like walking on the streets of Sofia when it's quiet and it's not buzzing with people.

Which film have you enjoyed working on the most?

The Black Dahlia was a challenge on a professional level. At the beginning when they asked me, can we do this movie here, and I said yes, they thought I was crazy. To create Los Angeles in the 1940's in Bulgaria - they said it was impossible. But I said, not only is it possible, we can do it to a very high standard. People will see for themselves the quality. Whether it's a good movie or a bad movie, people will have their own opinions, but one thing that is very clear is that from the technical side this movie is very good: the art, the costumes, the old cars, the sets, it's amazing. There's no way you could do it better.

What are your top-three favourite films of all time?

Movies like Cinema Paradiso are more my cup of tea. I like some of these old Italian-style movies. I'm more sentimental. We do a lot of action movies, yes. We don't make the decisions, the audience makes the decision about what they want to see. They want to see action. That's the reality of life. Me personally, I like to see a nice love story. I love some of the old Charlie Chaplin movies. And I always love to see a musical, it talks to me more.

Would you like one day to produce a musical?

I hope to do that!